VICTORY!!! -OR- Some Supremely Good News! (Updated with Additional Content)


Above: New York Times online headline this morning announcing the 5-4 SCOTUS decision in Obergefell v. Hodges finding a Constitutional right to same-sex marriage in all 50 states.
I don't even know what to say. More on this later.
Thank You (especially you, Justice Kennedy)! We should also probably thank Ted Olson for setting this in motion, not to mention all those who fought this long, difficult battle even during the most hopeless of times.
*******


Today's ruling follows yesterday's 6-3 ruling in the legally absurd King v. Burwell case holding up the clear intent of the Obamacare law regarding the federal exchanges. That ruling spares about 6 million people from abrupt, massive increases in their health insurance costs -- resulting in most of them not being able to afford it and facing the prospect of illness or premature death. All because of a (to quote Jonathan Chait) a "rightwing nuisance" lawsuit based on a drafting error in the 900-page Affordable Care Act and that should never have reached the Supreme Court in the first place, but such is the nature of the conservative movement today. 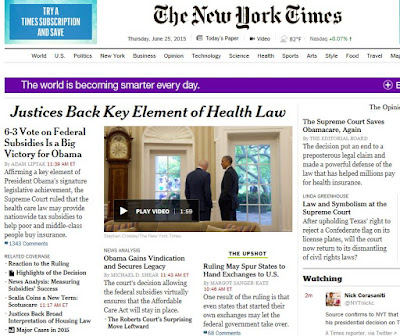 
In both of these cases, Antonin Scalia played the usual role of spewing, motor-mouthing verbose, angry, little troll. Let me just say that his rightwing talk radio approach of increasingly weird and silly sound bites (often inconsistent to previous ones, not to mention increasingly outright incoherent) is (as Jeffrey Toobin noted) an "increasingly tired act" to many. Oh, and the rightwing GOP freak-out is as freaky as you'd freak-spect. But let us not ruin this moment with thoughts of him or them.


As he is my go-to person for political commentary, here is Jonathan Chait's take on it (link embedded):Marriage Equality and the Modern Social Revolution. 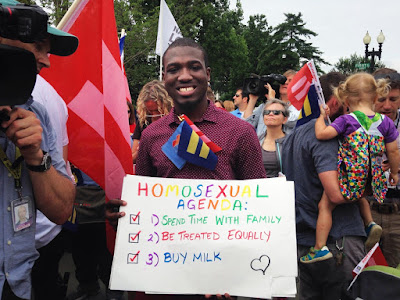 A young African American man holds up a humorously ironic sign outside the U.S. Supreme Court celebrating the SCOTUS same-sex marriage decision of Obergefell v. Hodges, Washington, D.C., June 26, 2015.
Here are more photos of the happy scene outside the Supreme Court building earlier today, I would have gone done there myself if I had known the decision was coming today. (Well, actually, I had a feeling it was. I just didn't get up early enough.)
Excerpt of Chait column:


"A half-century ago, racist murderers like Dylann Roof operated with broad social sanction, or even with the cooperation of the law. Crimes such as his may continue, but they exist in a completely different social context. 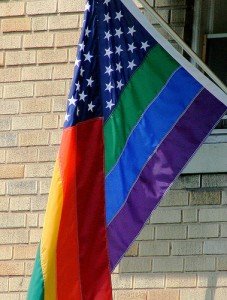 The recent, rapid reconsideration of Confederate symbolism in a sense epitomizes all this. Its direct impact is small, but it stands for something vast: a country reconsidering its entire historical arc, tearing down old myths inflected with white-supremacist propaganda and placing the fight for social equality at the center of its self-conception.


Periods of historical momentum such as the current one do not last forever; they breed backlash. But the progress they usher very well can last forever. The United States will never go back to the days when a person born gay could not hope to enjoy marriage. It will never go back to thinking of a president who is not white and male as abnormal. The country as it existed as recently as a decade ago is receding permanently into the mists of time."
Selah.


All in all, it has been a supremely good week for a more compassionate, humane, tolerant society with real equality for all under the Constitution and laws of the United States.
--Regulus
Posted by Regulus at 12:07 PM