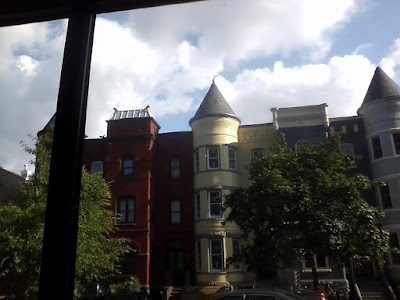 
I wanted to post a quick update but then the entry got way out of control -- as I attempted to excerpt this Andrew O'Hehir piece in Salon and counterpoint it to the conversation I had with my Russian friend Mike G. last night about the situation in Russia -- and for which I simply do not have enough pictures, relevant or otherwise. Finally, I had a bit of editing to do for a work assignment.
This entry removes all of that and returns instead to a brief update. 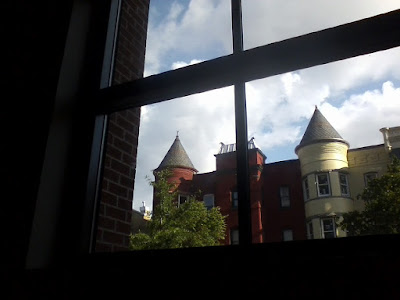 
My plan is to take a bike ride today although I'm not sure where or what route. Rather than taking the Metro to the suburbs and riding on one of the regular bike trails (e.g., CCT or W&OD), I was thinking of following at least for a time a less familiar route, although I suppose that could be dangerous. I was thinking of taking the Metro to Rockville and then biking east to Rock Creek Park and then south on that trail and over to Bethesda.
I don't have to meet anyone today, especially one in particular, which is a frickin' relief in so many ways. You have no idea. 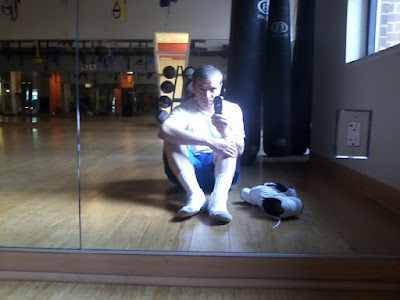 Yours truly, mirror-reflected, in the large studio, Anthony Bowen YMCA, Washington, D.C., 5:13PM June 6, 2015.
I had already finished my workout at that point (except for the swim part) and got my cellphone just to take a selfie.
*******


I had quite an epic workout yesterday: 6.76 miles on the treadmill over 65 minutes including 5-minute cool down; 70 minutes of weight-lifting (OK, there's a lot of downtime during that period); 20 minutes of an attempted "core" workout and a touch of gymnastics (yes, I can actually do a touch of gymnastics even at 45 and now borderline-in-good-shape) in the main studio (see above picture) that was unengaged at that time and thus very peaceful on a Saturday late afternoon (see top image); and a half hour in the pool. I was at the gym for 3-1/2 to 4 hours. 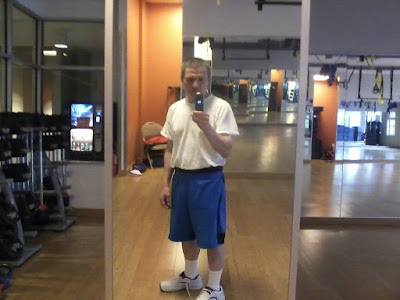 Yours truly again mirror-reflected, Anthony Bowen YMCA main studio, Washington, D.C., 5:15PM June 6, 2015.
*******
Oh, yes, my weight was 143.5 pounds -- so I'm at the 40-pound weight loss mark from three years ago and I've maintained that for the past 18 months even while putting on a noticeable about of muscle mass. In this way, the fat loss is more like 45 pounds.
Having said that, I apparently have elevated blood pressure -- I dread measuring it with that shitty little home device I have is just can't wait for me to have massive hypertension. Fuck you. As it is, I screwed up on the one measurement when it gave a nonsensical pulse reading (183) that I could verify was simply ridiculous (it was 72 the next time). The systolic and diastolic pressures are still too elevated, though. 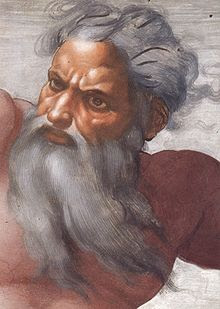 Of course, maybe it really is super elevated and I'm going to die soon -- but not before ending up a 500 pound immobile diabetic in a wheelchair watching Fox News -- and Unctuous and Righteous Amongst Us could give thanks to Jesus for "the blessing" in an online prayer circle while nobody else would even notice. I mean, that's frickin' God Demiurge's Holy Moly Plan, Isn't It?


Meanwhile, God Monad is off in some weird hyperspace dimension doing whatever, quite possibly spiritually cracked-out. 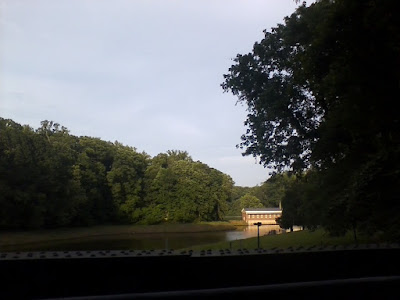 The view from the Capital Crescent Trail of the Dalecarlia Reservoir in incorporated Montgomery County (loosely speaking, Bethesda), right by the D.C. line, 7:15PM May 31, 2015.
*******


The weather is warm and humid with a southeasterly breeze. Air temperatures are around 78F across the D.C. area and dew points around 60F. The air mass is distinctly of a maritime nature and it appears to me to have come in last night around 9PM following a sunny, warm day (high of 85F at KDCA) -- judging by the wind shift and the stratocumulus clouds that began wafting in the from the southeast following a partly cloudy afternoon and clear sunset. 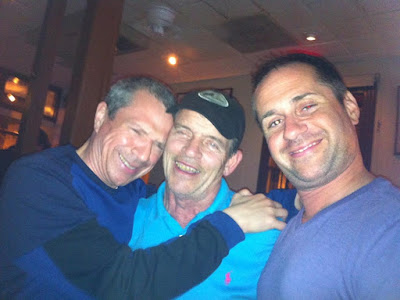 
The dew point didn't change much (if anything, it went down a notch) but the air mass was definitely oceanic feel. I want to say maritime tropical (mT) but given that the onshore flow is the result of a high ridging down the coast from New England, it might really be a very modified maritime polar (mP) one. Either way, the maritime air mass is banked up against the Blue Ridge. 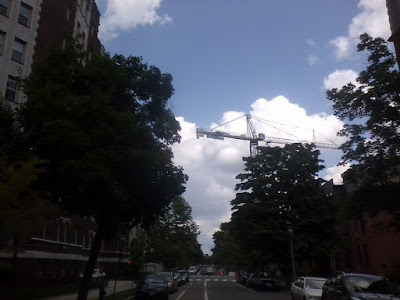 
Thunderstorms are forecasted for tomorrow and tomorrow night ahead of a cold frontal passage, although behind it, temps will, if anything, get a bit warmer -- around 90F for highs by Wednesday.
OK, that's all for now. My planned next update will be late Monday or after midnight Tuesday.
--Regulus

as for the article... did we talk about caytlin at all - i don't remember... was i in gary state?

here is a picture for our russia conversation:

the word in the fire that the japan head is breathing into putin's might shield says "sanctions"... :)

I don't think we talked about Caitlyn Jenner. I simply was seguing from talking about the Andrew O'Hehir piece to the reality of life in Russia for gays and lesbians and contrasting the two. At least that was my intention. Indeed, that is the point of the entry I've yet to post (and might not get around to ever).

Thank you for the link!