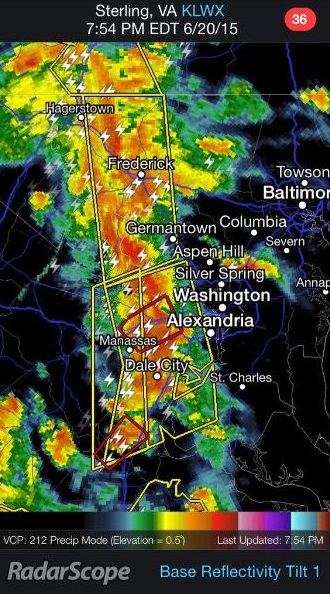 
I'm having trouble posting this entry because the weather situation is very intense as I write it, and it makes focusing on a single point difficult. 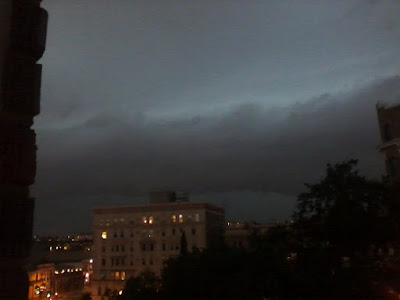 
There is a line of intense thunderstorms, some with tornado warnings associated with them, just west of D.C. pushing to the east, on the doorstep of the District. It's kind of apocalyptic looking (see picture directly above). This should be over by 10PM -- followed by scattered to numerous thunderstorms through the wee hours before the whole weather system clears out. 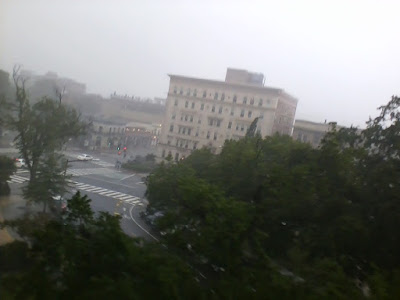 View from my apartment earlier during the first deluge. It was also hailing at that point.
*******


I just got back from the gym where I had a decent workout including a 6.5 mile jog despite my foot problems, although I reduced the incline by half and tried to run a bit more lightly (as if that could work). The fascist planter plantar fasciitis condition is still with me but the other issue seems to have ebbed. 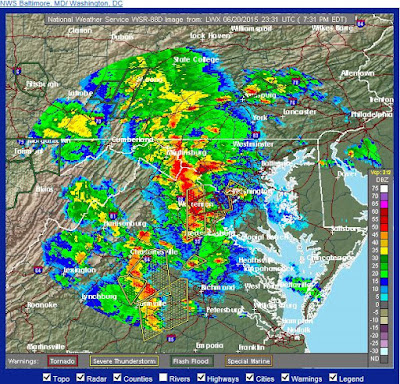 
I also went to the gym -- the National Capital YMCA rather than the Anthony Bowen YMCA -- on Thursday night and got in a nearly full workout there, despite an assortment of issues that make it -- except for its large swimming pool -- make it less desirable for me to go there than my regular gym.
Of course, the National Capital YMCA was my regular gym when I rejoined almost three years ago to the day and remained so until Oct. 2013. It was also my regular gym back in the period July 2001 - February 2004. 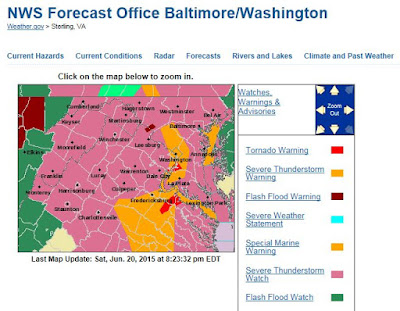 
I'm doing my laundry as I post this brief update, which is actually going to be more of a weather-themed entry because of the deluge of rain the D.C. Metro area is getting tonight as the remnant circulation of Tropical Storm Bill that came ashore on the Texas Gulf Coast last Tuesday and moved into the mid-Mississippi River Valley before rolling nearly due eastward, is going to pass overhead tonight, or very nearly so. I think it is now just considered by the NWS as a low pressure system rather than a "tropical depression." 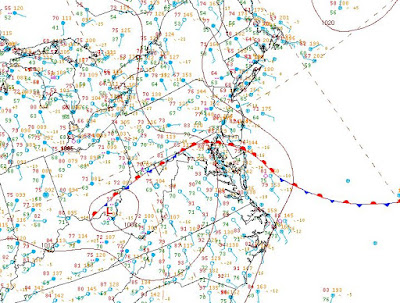 High-resolution NWS surface map for a portion of the eastern U.S. at 21Z June 20, 2015.
The low over southern Ohio near Huntington, W. Va., is the center of the circulation of what was once Tropical Storm Bill.
*******


There is both a severe thunderstorm watch and a flash flood watch in effect through 11PM tonight and 8AM tomorrow, respectively, for the entire extended Baltimore/Washington region. 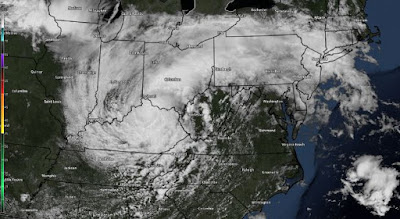 
There is a comprehensive Capital Weather Gang entry on this weather event (link embedded):
Updates: Dangerous storms moving through D.C. region, severe t’storm watch until 11 p.m.
Note: This entry title might change but the URL should remain the same. This happens in dramatic weather events.
Here is the 7:42PM update of that entry:


7:42 p.m. update: An intense line of storms with torrential rains and possible damaging winds is sweeping through our western and southwest suburbs and will impact the immediate metro area over the next hour. Multiple severe thunderstorm and tornado warnings are in effect. For the next hour, stay inside and off the roads. We will post the latest warnings as fast we as we can.
******* 
OK, that's all for now. I'm going to try to post my Jukebox Saturday Night entry. I'll post the rainfall totals in a subsequent entry. To be clear, it is deluging outside with almost continuous lightning and thunder. The lightning is the jarring cloud-to-ground kind. There could be cable disruptions that interrupt my ability to post a subsequent entry tonight.
--Regulus
Posted by Regulus at 8:34 PM