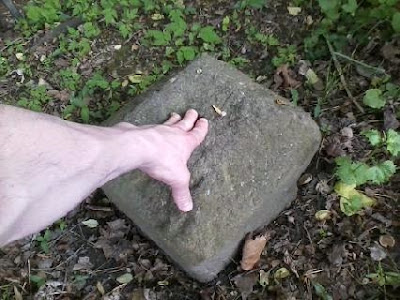 Yours truly touching what is the North Cornerstone of the District of Columbia, 4:34PM May 10, 2015.
This is located just off East-West Highway technically in Silver Spring, Maryland (or at least the side on which I was standing). I last visited this boundary stone (one of the original "Federal Territory" 40 and one of the 4 "vertex" ones) just about four years ago and discussed in much more detail in this entry. (I think I look better hand and arm-wise then I did back then.) The pictures in this entry were taken on my Sunday bike ride because although unrelated to the entry, if I don't post them now, I never will.
******* 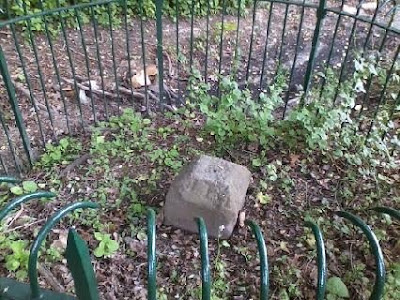 The North Cornerstone of the District of Columbia in all its semi-hidden obscurity, 4:34PM May 10, 2015.
To be clear, I had taken my bike on the Metro and got off in Silver Spring rather than Forest Glen because that's where the train I was on ended its run and I didn't feel like waiting 13 minutes for the next train to go one more stop.
*******


I had a supplemental gym night -- except it was at the National Capital YMCA where I used to go rather than the Anthony Bowen YMCA -- and then stopped on my way home at Floriana at D's bar for two glasses of wine while watching the "best of" and "bloopers to" The Golden Girls. 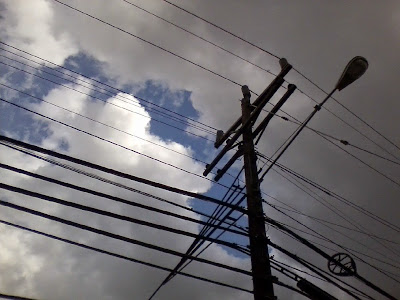 Cloud-filled skies above telephone pole and wires, 2400 block of East-West Highway, Silver Spring, Md., 4:41PM May 10, 2015.
East-West Highway has in places a sort of residential side street that parallels the main "highway" and it is kind of confusing.
*******


I thought I was the only person who knew every darn line to the series (including ones cut out in syndication) but apparently not. Anyway, by the time I got home, made dinner, balanced my checkbook and created a new spreadsheet for the start of the next pay period (today is payday), I was just too tired to post anything. 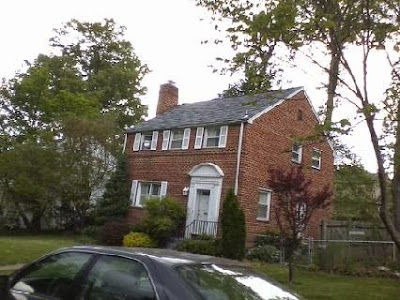 The house at 2627 East-West Highway, Silver Spring, Md., 4:44PM May 10, 2015.
This is one of the houses that is on the residential street that parallels the main road but has the same name (i.e., East-West Highway). This house intrigued me. I was thinking that Big Y'eyemah and I could live here and we could rent a basement room to the Crazy Cris and he could send me bizarre text messages in a sort of post-modern American version of Upstairs Downstairs soap opera. Of course, this is a more appropriate topic for my other blog that I've yet to "restart" in my planned way.
*******


As for the National Capital YMCA, I stopped going there regularly in Oct. 2013 during a delayed annual shutdown of the facility because the new Anthony Bowen YMCA was both closer to my apartment and nicer, although the swimming pool is significantly smaller and the facility somewhat more cramped (smaller). 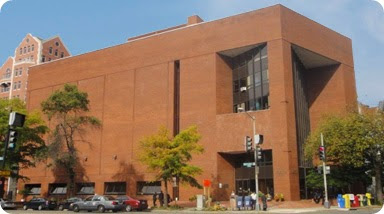 A picture of the National Capital YMCA that I found online.
I'm unsure of date but within the past 10 years given the adjoining structure (which, by the way, belongs to the Washington Catholic Archdioceses).
*******


Last night, I discovered that the National Capital Y had improved some of its equipment not to mention looked less dingy. And the swimming pool is just much better in terms of size, having a deep end, feeling like a genuine natatorium, etc. I didn't do any jogging but instead spent 47 minutes on one of Precor elliptical machines on the main 5th floor workout room facing the north-side row of windows. (On Wednesday, I had a 7+ mile jog on the treadmill broken up into two segments.) 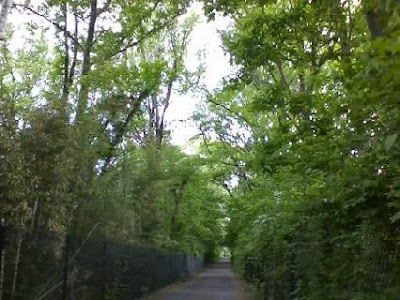 
I also did some weightlifting and a bit of midsection workout in the 7th floor aerobics studio with its even better view to the north up 17th Street and across the low-to-medium rise building clutter of Dupont Circle. (At the Anthony Bowen YMCA, I typically go into a small, pleasant, but windowless side studio for that if it is available). 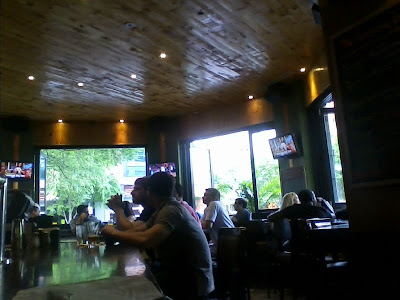 American Tap Room, Bethesda, Md., 5:31PM May 10, 2015.
The young bartender / waitress (Jessica) still thought I was just some weird old man no matter how engaging or pleasant I tried to be. Maybe I just do better with male bartenders. Well, no, not always.
*******


I picked one of the new "Precor" ellipticals (the place wasn't crowded) that gave me a view looking up 17th Street, just slightly east of due north, from which it possible to see the topmost portion of the Hughes Memorial Tower way up off Georgia Avenue almost to Silver Spring. It pokes up above some buildings and through a gap in nearby trees -- in particular, a ginormous elm tree that grows at the corner of Massachusetts Avenue and 17th Street where is located the Peruvian Embassy. 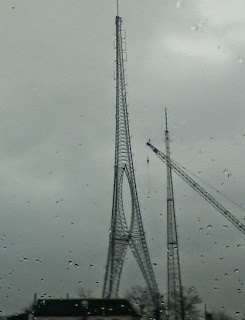 I caught the precise minute -- at 8:19PM last night -- when the daytime strobe mode of the tower switched to the nighttime red-winking mode, although it has been red LEDs for a number of years now, not the only slow-flashing sort that created a "rocket ship" pattern on this transmission tower with its distinctive "star tower" shape.


Above: A close-up of the tower taken on a rainy day, March 31, 2013 and posted here. It's so large and stands atop a hill (aeronautical charts show its height as 1,049' MSL, which is the same as two other towers off Nebraska Avenue but it is in a more prominent location) that it is visible from many places around the D.C. area. Gary, who lives near it, and I simply call it "the tower."
*******


On the big scale in the locker room, I weighed 146.5 pounds, which is still up a few pounds from my minimum since I rejoined the gym back in June 2012, but still down approx. 38 pounds from my heaviest, and because I've easily put on several pounds of muscle, more like 40 pounds of fat.
Oh, and as I mentioned, the pool was nice. 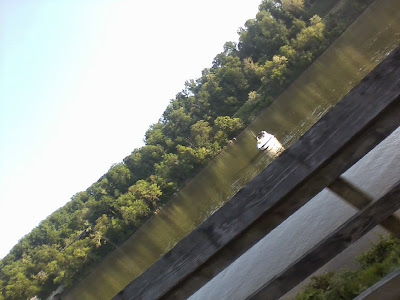 
OK, that's about all for now. I would like to post a longer entry but I simply don't have the time this morning. In particular, I wanted to mention about the storm system striking Southern California that I discussed in my previous entry, although it looks like rainfall totals are not that impressive for the drought-ravaged state, esp. in the Los Angeles area (well under 1/2" in most places, although anything in May there is unusual.) The radar this morning from San Diego and the larger "Pacific Southwest" composite radar mosaic is unusual: 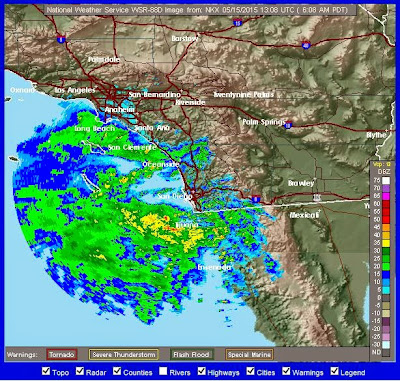 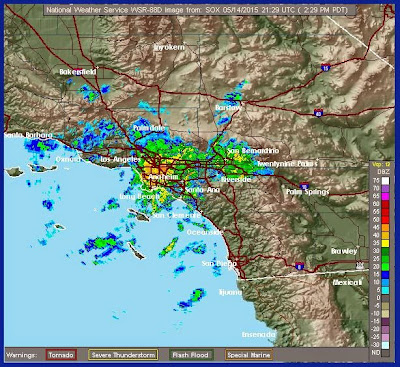 The SOX (Santa Ana Mountains) NWS weather radar in enhanced base mode reflectivity 2:29PM May 14, 2015.
This shows moderate rainfall in the immediate Los Angeles area. Of note, not all the NWS radars in this region can "see" over the mountainous terrain, although this time of year, it usually doesn't matter.
******* 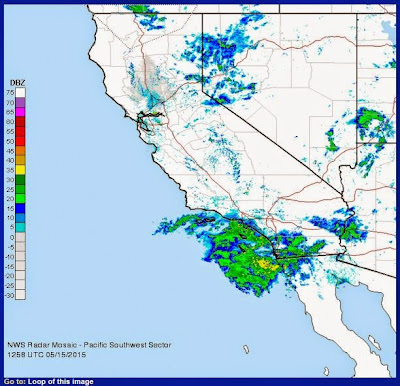 The Pacific Southwest sector composite radar mosaic at 1258UTC (6:58AM PDT) May 15, 2015.
This is actually rainfall offshore of San Diego, not some ginormous marine stratocumulus cloud deck.
*******


As for here in the Baltimore/Washington area, it continues to be flat and boring and dry -- it's 62F at KDCA at the 9AM hour with a southerly breeze under partly cloudy skies. However, there is a chance of t-storms in the 30 to 50 percent range from Saturday through next Tuesday.
OK, that's all for now. I'm probably not going to post an update tonight but instead will wait until tomorrow (Saturday).
--Regulus
Posted by Regulus at 10:25 AM