My Lost Thursday: A Photo-Essay Recap; About a Certain Annoying Song; and a Brief Update on Others' Terrestrial and Planetary Adventures 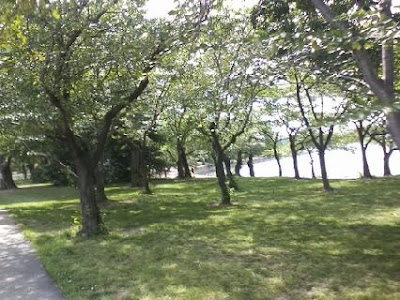 
So this is a follow-up to what I alluded to in my previous entry ...
My Thursday was basically wiped out as a functioning day because of way excess on Wednesday night. I had biked to work on Wednesday and then -- on the way home -- stopped at No. 9, where I had four drinks (two of the two-for-one specials). That should have been enough, except I then went to Floriana to see Jamie and then promptly went with him to Fox & Hound. 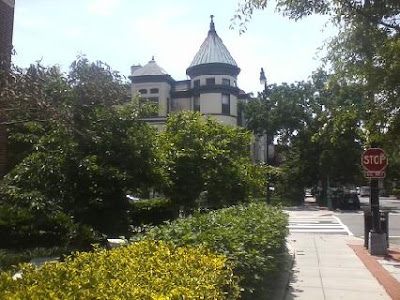 
Having said that, I don't actually remember being at Fox & Hound. The next thing I remember was waking up at home -- safe and sound with all my stuff, except my bicycle, which I left locked near the Safeway on 17th Street.
Not surprisingly, I did not make it to work until basically 1PM. I retrieved my bike -- which was just where I left it* and in functioning condition -- and rode there, locking it up in the usual spot outside DOE headquarters. 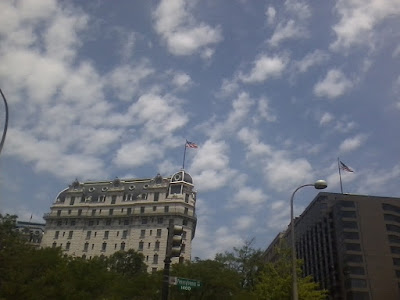 
*My bike is now old and beat up enough that it basically is not a target for any thieves, although it also seems to me that the rampant bike thievery in D.C. (quite possibly of a professional bike theft ring) from 10 years ago has, for now, ebbed. That's just my sense of things. 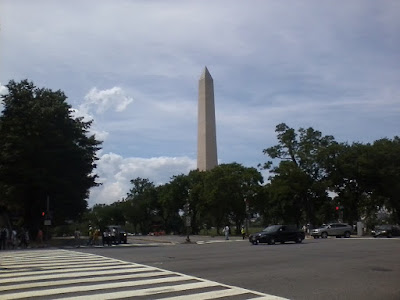 
Before going into the office, I first went to the cafeteria and bought what turned out to be disgusting lunch in a cardboard carton that was literally falling apart on me.
Some days the food there is just fine and other days, well, it isn't and this was a day that it wasn't. 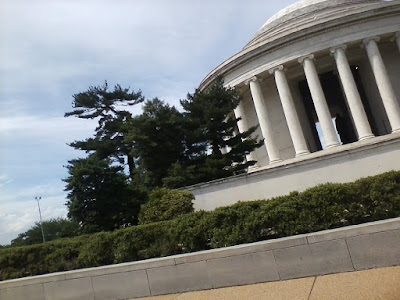 
At the office, I felt awful and incapable of doing any work, and I just wanted to be outside so I left shortly after I arrived and the day was pretty much a total loss, an unplanned day off. (The good news is that I have an editing assignment to do over the weekend that should help me recoup part of the hours this pay period.)
Upon leaving the office, I took a bike ride. The day was summery warm and humid with puffy cumulus congestus clouds in the sky and a south-southwesterly breeze. Indeed, it was the puffy clouds that attracted me to take a bike ride. 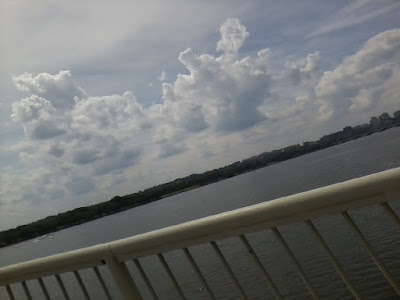 
Later, there were some widely scattered t-storms, one of which (of course) narrowly missed KDCA, but none in the District proper.Temps actually broke the 90F-mark in the immediate area including 92F at KDCA and dew points were / are in the mid-60s Fahrenheit (with some variation; presently, KDCA has a 69F dew point).
I rode the bike over the 14th Street Bridge, specifically, the George Mason span on the dedicated pedestrian / bike sidewalk (see picture directly above) and then along the Potomac to Rosslyn, back into D.C. over the Key Bridge, and then on a circuitous route through the backstreets of Georgetown. 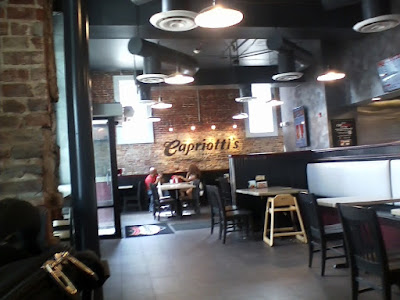 
I stopped at a sandwich shop at M and 34th Streets NW called Capriotti's Sandwich Shop (pictured directly above). I just had a Gatorade in a cup of ice. The place was air conditioned and a very pleasant respite. Everything was clean and well-kept and the staff friendly. It also looked like it made some great sandwiches. I should have had a nice lunch there rather than the awful cafeteria lunch.
Anyway, I continued on my way home, zigzagging on the backstreets of Georgetown "up" the grid into Dupont Circle via the Dumbarton (Q Street) Bridge and then home by about 4PM. (I saw Mark on the way home and stopped to talk to him for about 10 minutes).
I then made it to the gym by about quarter to six and had a rather good workout including 65 minutes on the treadmill jogging 6.62 miles (this includes 5 minute cool down).That sweaty jog is such an excellent detoxicant. I also did my weightlifting and had a 15 minute swim. 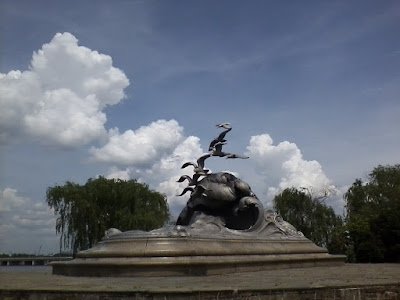 The Navy – Merchant Marine Memorial, Columbia Island, Washington, D.C.**, 2:52PM May 28, 2015.
This is a wonderful memorial. The design is awesome and to those it is dedicated -- the thousands who have perished at sea in whatever service to the country -- is really moving. I found myself getting a bit teary.
**It is located on Columbia Island, which is actually in the District of Columbia even though it is on the Virginia side of the Potomac River.
*******


After getting home around 915PM, I went back to the scene of last night's doings -- first to Floriana and then, briefly, with Jamie to Fox & Hound. (I had texted him during the day and I generally knew it was a shit-show the night before, although not in a bad way.)
(Speaking of texts, I also had about 45 text message exchanges with Chris today -- then they abruptly stopped around midafternoon. He was apparently at the Scripps National Spelling Bee that was held on Wednesday and Thursday at the Gaylord National Resort and Convention Center at the National Harbor complex, and he provided me with running colorful commentary about the predominate ethnicity of the participants.) 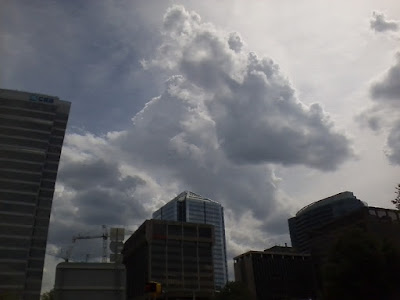 Cumulus congestus clouds over the skyscrapers of Rosslyn, Arlington, Va., 3:07PM May 28, 2015.
The tall building with the glass pyramidal top is 1812 N. Moore Street. The tallest office building in the immediate D.C. area, it is visible from my apartment window about 3 miles away. It's still mostly, if not entirely, vacant.
*******


For tomorrow, I need to try to have a productive day at work. I'm doing some client-supporting work, specifically, researching smart grid activities in Maryland (one of four states being analyzed).
OK, that's just about all for now, except to say I have that damn "My Sharona" song stuck in my head, in particular the lyrics: 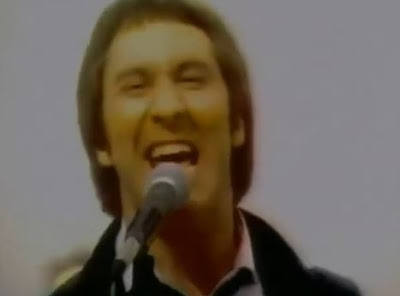 "Never gonna stop, give it up, such a dirty mind! / I always get it up, for the touch of the younger kind! / My, my, my, aye-aye, whoa! / M-m-m-my Sharona! / M-m-m-my Sharona!"
God, I hate that song, and not just because the late Doug Fieger was singing almost psychotically in what is basically a simulated sex performance art for a then-underage girl, but also because the weird stuttering drum beat of the song gets so easily lodged in one's head, playing over and over.
I featured that song in this jukebox Saturday night entry last June but had to switch the YouTube link since the one I had was no longer available due to the usual copyright infringement bullshit, in this case, 36 years later and two band members deceased. Wall-P must be in orbit. 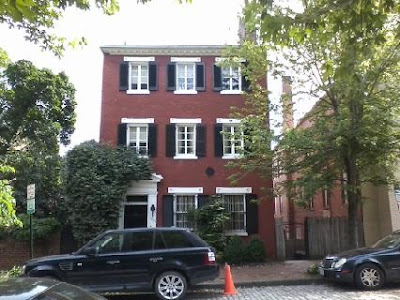 
Before ending, I would like to note that Natan and Julia have posted a new entry on their "Forget Jobs, Climb Mountains" blog chronicling their summer travels across the United States with extensive hiking, in this entry, 43 miles on Isle Royale National Park in Lake Superior.
Finally, I must post a New Horizons / Pluto-Palooza update! (I would do it now but it is so late and I'm so tired.) There are awesome new pictures to see from our wonderful, intrepid little space probe -- now just 46 days / 55 million kilometers away from its rendezvous with Pluto and its moons. PLUTO IS ON!!
--Regulus