Let's start our Jukebox Saturday Night Entry off on a really smooth and relaxing note ...

"Got To Keep Moving" by Nick Colionne from his Influences release (2014)
Nick Colionne has made a lot of good music. I should feature more of his pieces for my "JbSNE" series. Influences is his most recent release.
*******

Here is something 1980s old-school energetic ...

"St. Elmo's Fire (Man in Motion)" by John Parr from his soundtrack album to the wonderful movie St. Elmo's Fire (1985)
This was a number 1 hit here in the U.S. (on the Billboard Hot 100 chart) and very popular in a number of other countries.
The lyrics are tremendous in an over-the-top way, especially this stanza: 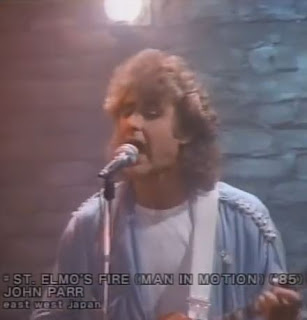 "I can see a new horizon underneath the blazin' sky! / I'll be where the eagle's flying higher and higher! / Gonna be your man in motion, all I need is a pair of wheels! / Take me where my future's lyin', St. Elmo's fire! / I can climb the highest mountain, cross the wildest sea!" /


"I can feel St. Elmo's fire burnin' in me, burnin' in me!"
By the way, there is a scene at 0:43 that I swear is "Fraternity Row" at UMCP. In fact, I just looked it up and whaddaya know -- it is. That was 7 years before I arrived at UMCP for my unhappy decades of multiple degree-seeking (and attaining) programs, but let's not get into that now. (FYI: I was once a staff writer for The Diamondback.)
*******


Finally, this is another Meghan Trainor piece that I've been meaning to post both for the song and the video accompanying it ...
"Dear Future Husband" by Meghan Trainor from her recent album entitled, yes, Title (2015)
I really like Meghan Trainor. As for this video, all the attractive boys featured it in would be the perfect gay husband for her. Ha ha
--Regulus