Daytime Sunlight and Warmth Morphs Into a Nighttime Tropical Deluge -OR- Springtime in the Capital of the Empire: An Ongoing Series 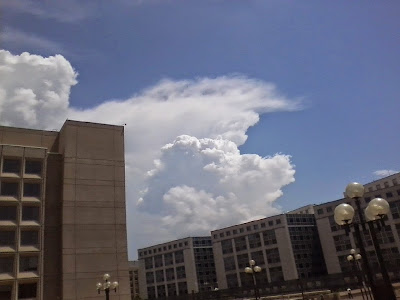 
I am exceedingly tired tonight. More on that topic in a bit. However, first let me note that tonight ended up being very wet across the entire Baltimore / Washington area with drenching thunderstorms including a monsoon-like squall that crossed the immediate D.C. area in the past hour in what resembled a sort of tropical-like "snow squall" in terms of how the torrents of rain appeared. Also, the storms weren't severe -- just drenching -- with lightning mostly confined to cloud-to-cloud. 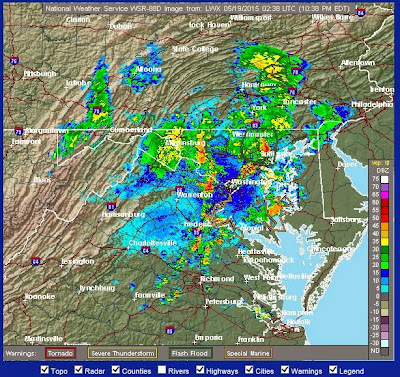 
The air mass is quite tropical and unstable but with a 500mb ridge overhead and a cold front well to the west so this all makes sense. It was 77F air temp. and 71F dew point at the 11PM hour at KDCA, which, by the way, did NOT miss tonight's storm.
I don't have the daily totals yet but they were easily in the 1/2" to 1" inch range across most places and, in fact, the Baltimore area had more like 1 to 3 inches and there are flash flood warnings in effect. The KDCA metar on the Weather Underground site shows 0.67" in the past hour, which is on top of the 0.06" that fell earlier this evening. Tonight's rainfall should erase most of the monthly deficits at two of the three regional climate stations (KDCA and KIAD). (KBWI is not in deficit.) 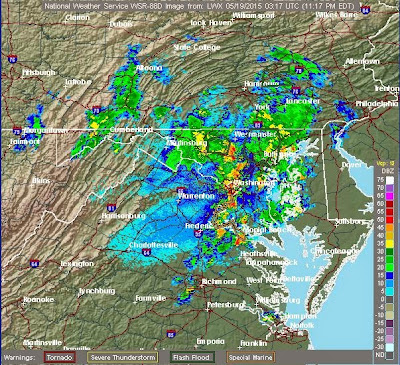 
Temperatures this month remain well above normal with the first 18 days averaging as follows: 71.6F or +7.7F at KDCA; 67.6F or +6.8F at KBWI; and 67.6F or +6.4F at KIAD. This doesn't include today's warm weather that included the second incidence of 90F or better at KDCA (92F). Overnight lows have also been near or even at record low minima. 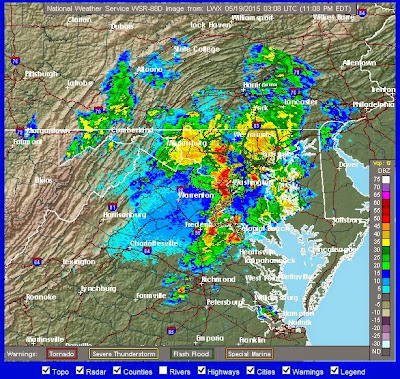 
The Sterling (LWX) discussion earlier tonight (8:53PM) stated the following:
A WARM AND HUMID AIRMASS IS IN PLACE ACROSS THE MID-ATLANTIC TONIGHT. SHOWERS AND THUNDERSTORMS HAVE BEEN ONGOING UNDER A 500MB RIDGE. INSTABILITY IS HIGH ACROSS MUCH OF THE REGION WITH ML CAPE 1K-2K J/KG. THE SHEAR IS STILL VERY LOW DUE TO THE UPPER LEVEL RIDGE AND THEREFORE THUNDERSTORMS HAVE NOT BEEN SEVERE. MOST STORMS HAVE BEEN INITIATING ON OUTFLOW BOUNDARIES AND MOVING SLOWLY DUE TO THE WEAK STEERING FLOW. HEAVY RAIN CONTINUES TO BE THE MAIN THREAT TONIGHT WITH PWATS AROUND 1.8 INCHES. LUCKILY STEERING FLOW IS WESTERLY SO STORMS HAVE BEEN PROGRESSING BUT SLOWLY. 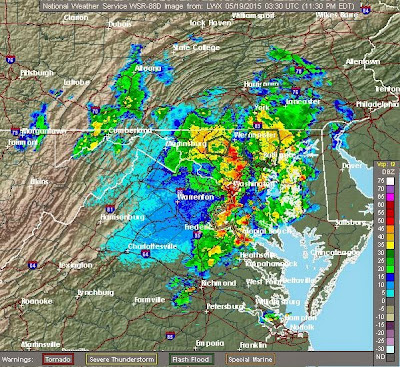 
From my 5th floor apt. window looking west and southwest, I can see jets are again taking off from National (upriver take off tonight), so the weather-related ground stop there has been lifted.
I will admit that I wasn't really following the weather situation earlier and when I got home from work, it just sort of looked like another one of those "warm season" Eastern Seaboard evenings when -- after thunderstorms formed but really didn't impact my immediate area (as in, where I happen to be) -- the sky just appears to be clearing and its all over. However, while at the gym, I noticed it had been raining outside and then when I walked the short way home, it started again and was a tropical warm, rainy night of a sort I hadn't anticipated. 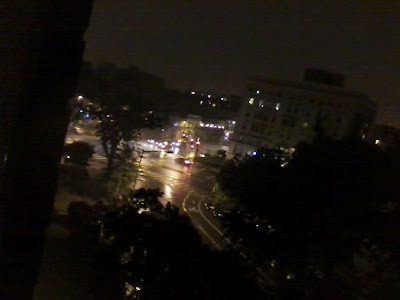 The view from my apartment during a nighttime thunderstorm looking at the intersection of 16th and U Streets and New Hampshire Avenue, Washington, D.C., 11:22PM May 18, 2015.
Yes, my flip-open cell phone camera isn't the greatest.


Speaking of the gym, I'm quite glad I went tonight. I felt like shit all day -- indeed, when I posted my morning entry, I didn't realize just how badly I felt or how much I had overdone it at another Larry's Lounge Sunday night "coda" to a weekend that already included too much drinking. I didn't think I was going to be able to do my workout, in particular the treadmill jog, but I did (all 6.54 miles) and it made me feel substantially better. The weightlifting part was so-so. I also went into the pool for about 15 minutes. Milan was there and I talked to him. However, Fred was not there tonight. 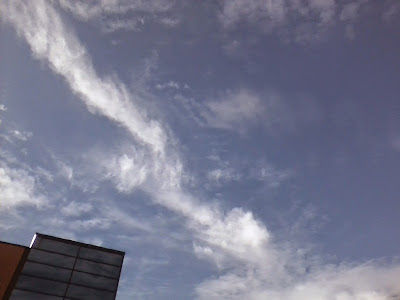 
I'm going to end this entry now without having actually posted what I intended to: links to and excerpts of two of Paul Krugman's most recent New York Times op-ed pieces plus some of his blog entries. I'm just too tired to do so. I'll try tomorrow night. They should be must-reads, especially for Fred Hiatt and his Washington Consensus of "Very Serious People" who facilitated what happened. The pieces are why Duncan Black of Eschaton Blog appropriately calls Prof. Krugman by the name "Krgthulu." 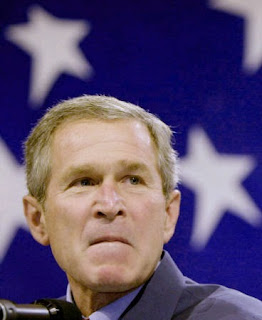 Instead, I'll just post the links embedded in the titles and with their dates:

I may return to talk about these in more detail. 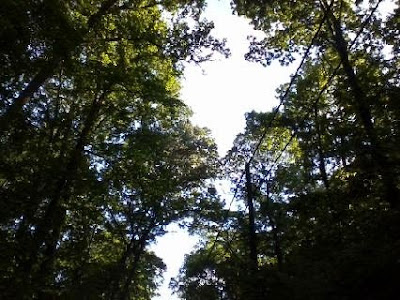 
OK, that's all for now. I'll update this entry (probably tomorrow night) with the final precipitation stats for May 18th and month / year to date totals and departures for the usual three suspect sites.
Updated 12:24AM 5/20/2015: 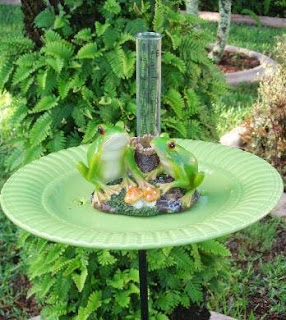 Rather than posting a full precipitation stat set for the 3 airports and the Maryland Science Center in this entry, I'll just include the May 18th daily totals (and have a general update another time). They were as follows: KDCA: 0.76 inches; KBWI 1.54 inches (daily record); KIAD: 0.38 inches; and KDMH: 2.42 inches.*


*KDMH does not a full 30-year "average" data set as yet.
This CWG entry discussed how much rain fell and graphically shows regional radar rainfall estimates as well as changes in the May monthly deficits area-wide between the 18th and 19th.
End of update and of entry.

-Regulus
Posted by Regulus at 1:35 AM