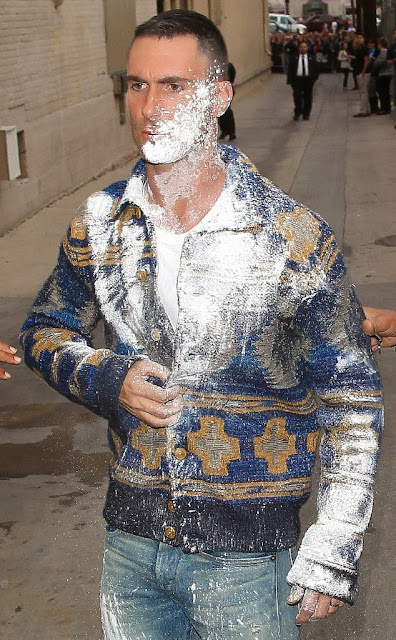 Adam Levine, (powder) sugar-bombed: The Aftermath.*
Levine was signing autographs for screaming, adoring fans outside a TV studio in the Hollywood neighborhood of Los Angeles yesterday following filming of an episode of Jimmy Kimmel Live!
As pointed out in this sarcastic assessment, the man who did it -- Navid Farsi -- either was being deeply ironic given the Maroon 5 song "Sugar" and its lyrics ("Need a little sweetness in my life ... Your sugar / Yes, please / Won't you come and put it down on me?") or just really hates the song.

Farsi was arrested for doing this and charged with battery (or suspicion of battery) against Levine and others -- and he's being held on a whopping $100,000 bail. It should be appointed out that Farsi apparently threw a rock at Chris Rock last week. 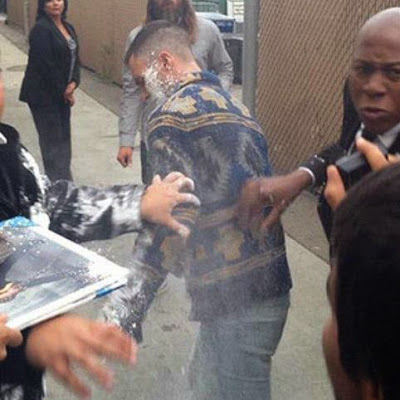 
*I'm actually slightly suspicious the lead image. I'm thinking it might have been staged after the fact -- because if you watch the video of Levine being sugar bombed, he immediately and furiously removes his shirt and is just wearing a t-shirt (see image below). He looks just too perfect and collected in the top image for someone who seconds earlier had been in what was surely for him a deeply jarring experience and with chaos erupting around him. At the very least, he had put the shirt back on after things settled down. Note how far he is from his fans, as well, and compare that to the video. More speculatively, it appears as though he put some of the sugar back onto face (since in the video stills, he had clearly wiped it off, as anyone would reflexively do). Why? All I can surmise is so as to get the best possible image to the world from what by then was simply a very embarrassing occurrence and to make the best of it. 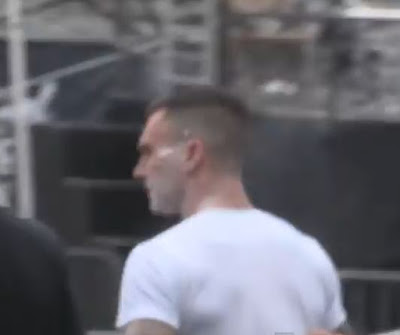 YouTube video screenshot of Adam Levine about 30 seconds after being sugar bombed outside the Jimmy Kimmel Live! studio on May 6, 2015.
The attack itself was certainly not staged -- and Levine was furious.
This got me thinking: You couldn't do this with would-be celebrity / local comedian M. WADE Tipamillyun because the "bomb" would have to be handfuls of $10 and $20 bills -- and who's going to part with that much cash? Besides, he'd just vacuum it right up.
--Regulus
Posted by Regulus at 11:39 PM