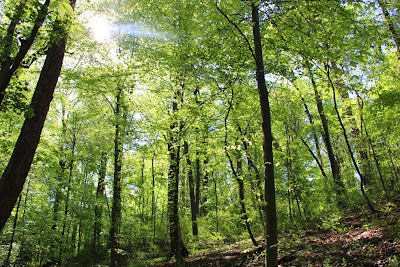 Monday morning in May.


Today promises -- threatens -- to be quite warm and lots of sunshine, not to mention lots of tree pollen and any other allergens, temperatures around 84F, and no chance of rain. The "summer season" is here, and I'm stuck for the next four to five months in it. 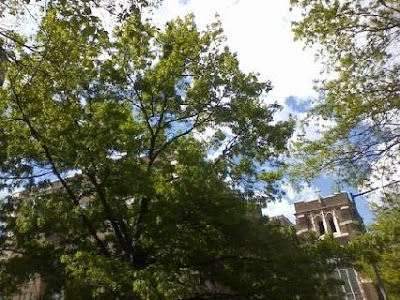 Leafy green tree branches and sky in the 2000 block of New Hampshire Avenue NW, Washington, D.C., 3:39PM May 2, 2015.
This is the block where I live (in the Hampton Courts). The building visible in the image is Augustana Lutheran Church. The only interaction I've ever had with it is to drop off clothes I'm donating.
*******


I biked approximately 28 miles yesterday with the main part being from the end of the Silver Line (where I went on the Metro, of course), along the Washington and Old Dominion (W&OD) Trail back to Arlington and then onto the Four Mile Run Trail over to the Mt. Vernon Trail and back into the city. Those three stretches plus everything else total, I estimate, about 28 miles. 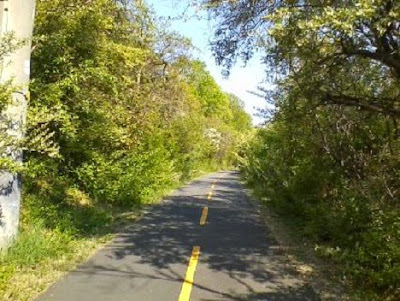 The W&OD Trail near mile marker 16.5, Reston, Va., 3:59PM May 3, 2015.
This is right off Wiehle Avenue near the Wiehle - Reston East Metro Station at the start of the bike ride. The W&OD Trail runs about another 30 miles to the west into the rolling Virginia countryside, ending in Purcellville.
*******


I had lunch earlier in the day with Wendy ant Bar Pilar on 14th Street (where I had gone once before at night). Later in the evening (at the end of my bike ride), I went to No. 9 and then Larry's Lounge. I enjoyed No. 9 -- both Jose and Aaron were working next to each other -- but Larry's Lounge is another story. I'm not going to get into it now. Honestly, I'm not sure why I go there at all, although there are two bartenders I like (neither of whom was there last night). 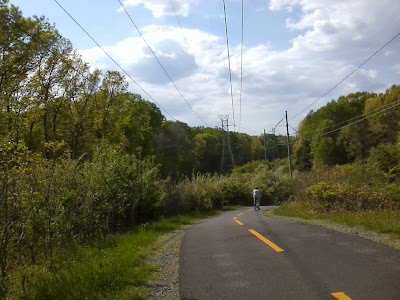 
Having said that, one of those two is working there tonight and my friend Roger is supposed to be there before he leaves for his annual three month stay in central Puebla, Mexico, where he has an apartment. I might mix up my gym night and go, although perhaps not. I'll see. 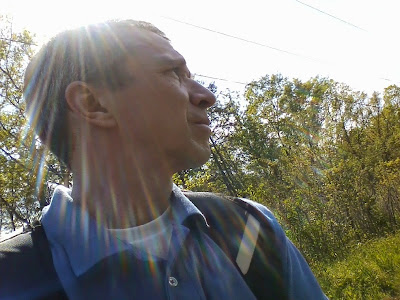 Yours truly on the W&OD Trail near mile marker 15 in Reston, Va., 4:08PM May 3, 2015.
I got really tired of hearing "passing on your left" yesterday, but I was dragging badly for the first 10 miles of this ride. Furthermore, my old, cheap bike doesn't lend itself to speed.
I stopped at the Whole Foods in Vienna for a snack. The place was filled with families and their family values.
*******


My sinus infection is ebbing, I think, but I'm still feeling a bit under the weather. Maybe that's just my background state now of how I'll always feel. 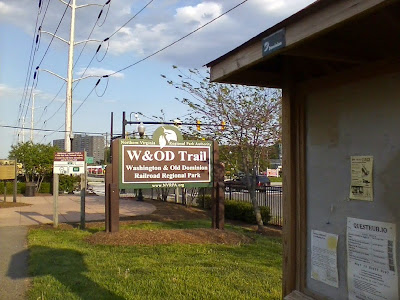 The start of the W&OD Trail -- this would be mile marker 0, although there is no such sign that I've seen -- in the Shirlington section of Arlington, Va., 6:05PM May 3, 2015.
At this point, you pick up the Four Mile Run Trail that connects to the Mount Vernon Trail about 2.1 miles away (at least that's the distance given on the sign).
******* 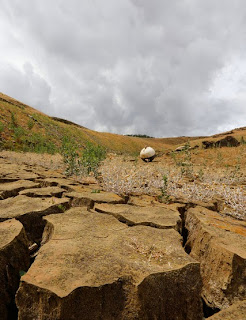 OK, I better get my day started. However, let me just direct your attention to this New York Times op-ed by Timothy Egan on the drought in California and the consequences for the state. It appeared in yesterday's print edition as well. The link is embedded: The End of California? Interesting read.

Above: A hapless buoy sits on the bone-dry bottom of Lake McSwain of central California.
That's all for now. I'll try to post an entry tonight.
--Regulus
Posted by Regulus at 9:18 AM