A Lovely Spring Saturday Early Afternoon (and guess who's still stuck in his dust-trap of an old apartment ...) -OR- A Weekend Brief 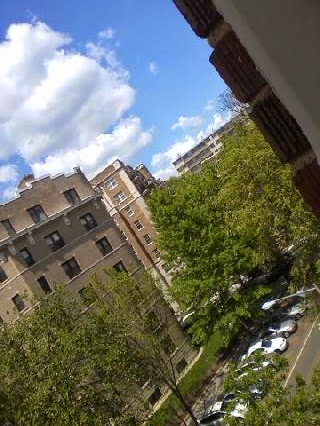 Once again, the view this early afternoon from my apartment looking north by northwest toward Meridian Hill Park, Washington, D.C., 1:35PM May 2, 2015.
The buildings in this view include, the Brittany (left), the ornate Camden Roosevelt, and (poking up above the arboreal greenery) the behemoth 2112 New Hampshire Avenue building that really fronts onto W Street. Not visible in this image is the truly lovely Northumberland. I, of course, live in the old Hampton Courts.
*******

Guess I should get this day started ...


My plan is a typical Saturday routine of gym, laundry, posting a jukebox Saturday night entry, and dinner with a friend (tonight, Roger) at one of the regular neighborhood (probably Trio). Roger is actually going away next on his annual 3 month spring/summer season stay in Mexico (he has an apartment in the center of Puebla). (Of note, both Puebla and Mexico City get a lot more precipitation in a typical year than I thought -- not that much different from D.C.)
Tomorrow, I plan to take a bike ride and have dinner with Wendy.
Last night, I went to Floriana where I met Fred and Roger and then Milan showed up. Later, Milan and I went to No. 9 where we met up with Gary. Thereafter, Gary and I went next door to Stoney's where Howie was getting off work and we somehow ended up at my apartment.
The weather is bright, sunny, and pleasantly warm with temps. around 72F here in D.C. It is forecasted to be in the 80s Fahrenheit for much of the week without much of a chance for rain, which is too bad. Even those warm temperatures aren't has awful as the mid 90s F heat of recent spring seasons (esp. in 2010 and 2011, two of the worst weather years by my reckoning ever in this region).
OK, that's all for now. I really don't have anything to say. I sort of want to go back to sleep for an hour, but that would screw up my day (more than it already is).
--Regulus
Posted by Regulus at 1:54 PM