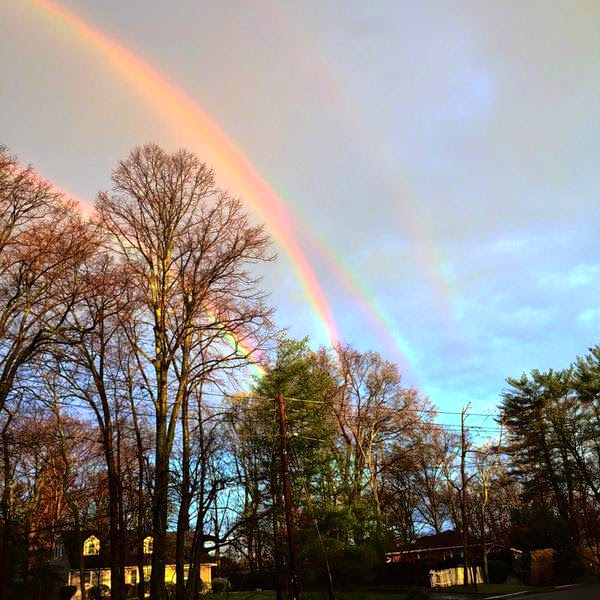 A double double-decker (i.e., quadruple) rainbow as seen from the Glen Cove, Long Island train station on the morning of April 21, 2015. Photo by (@amanda_curtis via Twitter, CEO NineteenthAmendment.com).
Reposted from this Capital Weather Gang entry but with slight adaption (including lead image picture placement, adjustment and/or addition of captions, and all the text colors):
Is it legit? Rare quadruple rainbow photo goes viral
by Jason Samenow April 21st, 2015 at 3:05PM EDT
While waiting for her train this morning at the Glen Cove train station in Long Island, NY, Amanda Curtis grabbed her phone and snapped a photo of an incredibly rare atmospheric phenomenon: A quadruple rainbow.
When she posted the photo on Twitter – where it went viral, some folks were incredulous. They said the photo was photoshopped or that Curtis had shot it through glass, causing a reflection.
But, in the interview posted below, Curtis told The Weather Channel the image was authentic and taken in the open air:
[Blog Editor's Note: There follows an interview with Ms. Curtis by the Weather Channel, specifically, Jim "Crocodile Dundee" Cantore and two other idiot media clowns. While Ms. Curtis, a fashion designer, is a young, genuine, and seemingly nice person, the Weather Channel on-air team is unwatchable, so I'm not going even to attempt to embed the video, which I don't even think I could if I wanted to. Instead, it is just a screenshot image of the video. If you want to see the interview, go to the CWG entry itself here.] 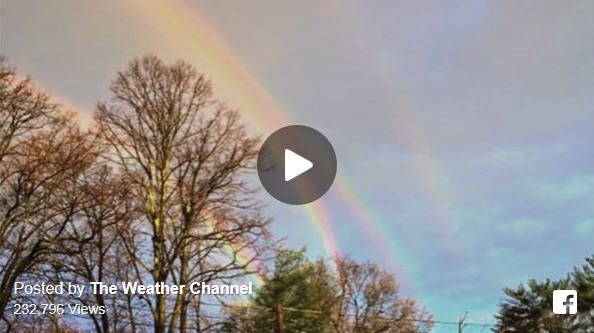 Not an actually embedded video.
The photo was convincing to Paul Neiman, who works as a research meteorologist at NOAA's Earth System Research Observatory. He posted this very helpful explanation on his Facebook page, which he allowed me to republish:
This is an outstanding example of a primary and secondary rainbow (relatively common) occurring together with their reflected-light counterparts (quite rare). Allow me to elaborate.
A typical primary rainbow is caused by refraction and one internal reflection of sunlight within raindrops, resulting in a rainbow that is positioned 41 arc degrees from the anti-solar point (i.e., the point directly opposite the sun – for example, if the sun is 10 degrees above the horizon at your back, the anti-solar point is 10 degrees below the horizon directly in front of you). The refraction causes the separation of white sunlight into its component colors, with red on the outside of the rainbow and violet on the inside.
The secondary rainbow, which is centered 51 arc degrees from the anti-solar point (i.e., the larger of the two bows during a typical display), involves two internal reflections of sunlight within the raindrops rather than one, resulting in a reversal of the color sequence (red on the inside and violet on the outside). We can usually only see the portion of these rainbows above the horizon, because there isn’t a sufficient density of raindrops between the observer and the ground to see the rainbow below the horizon (exceptions include full-circle rainbows viewed from locales such as airplanes and mountain tops).
So far, so good. For the much rarer reflected-light rainbows shown in this spectacular photo, a large glassy-smooth water surface is required behind the observer. This smooth water surface reflects the sun, such that a second solar light source is generated. This reflected sun, which is located the same the number of arc degrees below the horizon as the real sun is above the horizon, creates a second primary and secondary rainbow on the opposite side of the sky from the sun, but with the center of these reflected-light rainbows above the horizon. The geometry dictates that the regular and reflected-light rainbows will join at the horizon, as this photo shows.
Neiman's explanation requires a body of water to be behind the observer. And, indeed, Oyster Bay – located about 2 miles east-northeast of the train station "likely provided the reflective surface to create the reflected-light rainbows", he said. 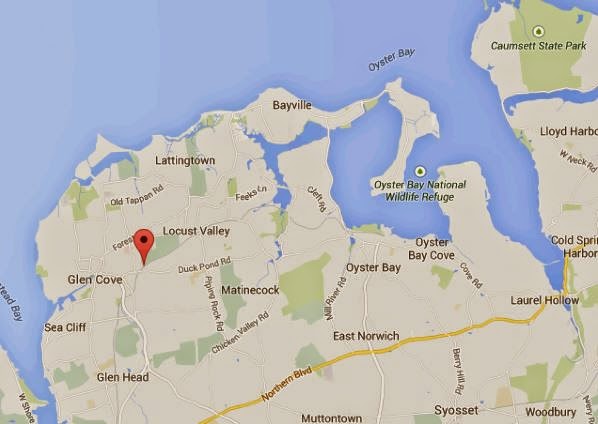 Google map showing the location of Glen Cove LIRR train station in relation to Oyster Bay and Long Island Sound.
Neiman said he was "awe-struck by this photo", so too apparently were the thousands who shared it on social media.
*******


As for the purported / proverbial pot of gold at the end of any rainbow ... 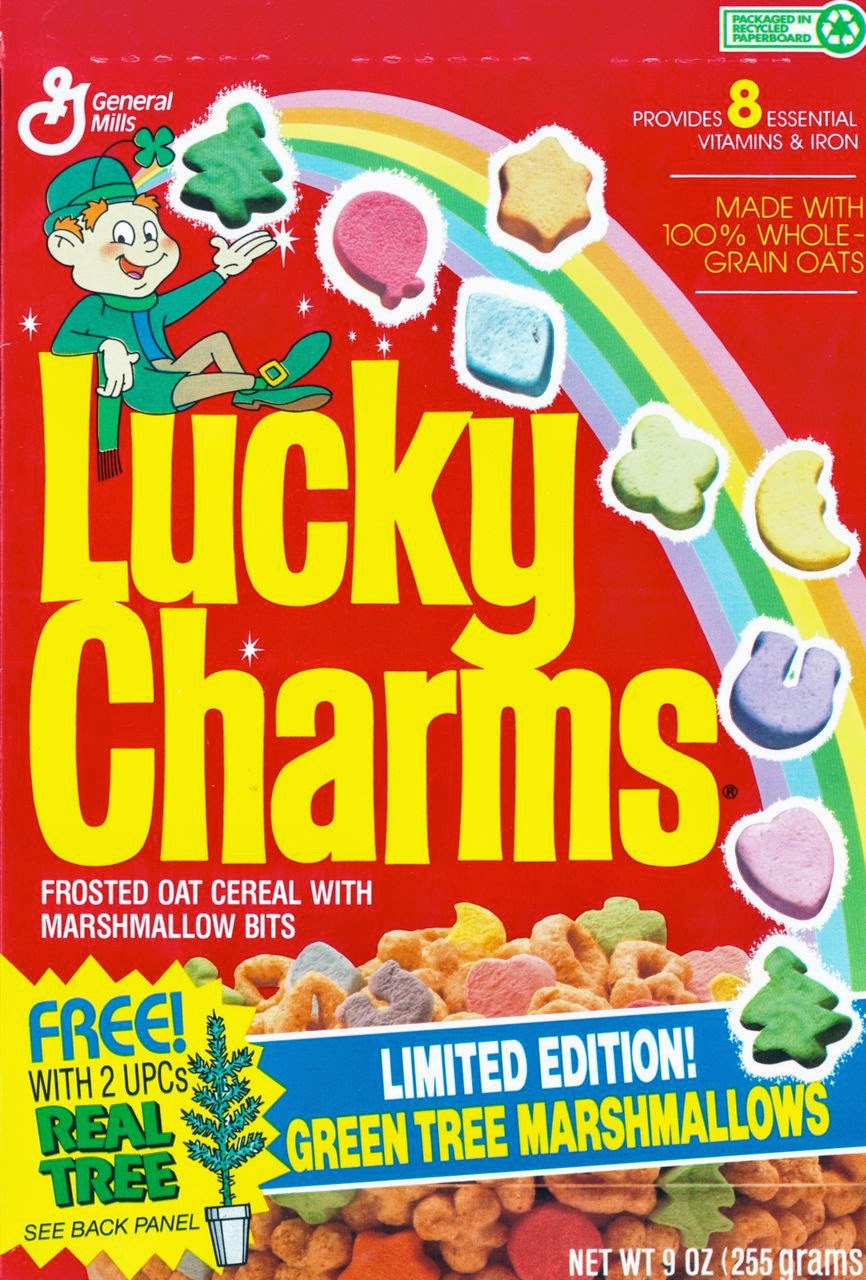 If awful Wall-P, a.k.a., Pitty Shil, were there, he'd go nuts looking for actual pots of gold because that would enhance his net worth. 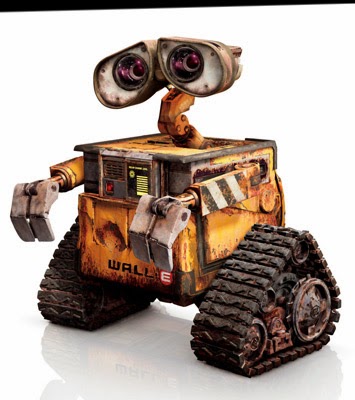 "Eh. Eh. Eheheh. My net assets are far in excess of the D.C. definition of wealthy. By the universal law of libertarian morality, and from a strict constructionist legal framework based upon the primacy of contract law in our jurisprudence system, I therefore conclude that I am a morally far superior entity--"


Ohhhh, knock it off, Wall-P, you tangerine-sized ball of condensed matter corporate stoogery and oligarchical overclass useful idiocy. Go back to whatever "Dr. Who" episode whence you came.
*******


OK, that's all for now. To be clear, this totally wasn't the entry I planned tonight but here it is. I'm skipping the gym tomorrow night and probably not taking home the computer, so no entry until at least late Thursday.
--Regulus
Posted by Regulus at 1:02 AM