Reliving Vintage 1980s Baltimore Television Fare, One YouTube Clip at a Time -OR- Don't Be Late for Your Mr. Ray's Hair Weave Appointment 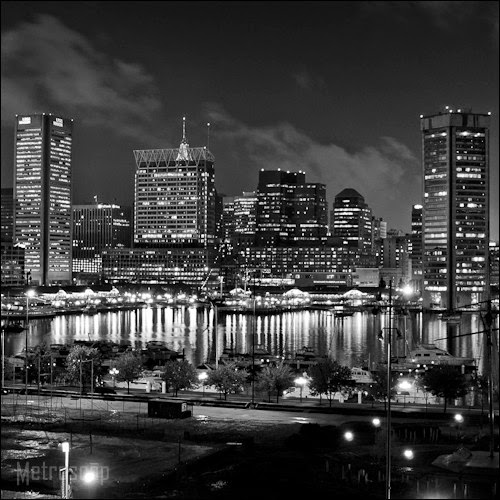 This photograph is by the prolific and accomplished photographer of urban cityscapes Jason Wilson of Metroscap, Ltd. as is associated with a series of wonderful nighttime black and white images of Baltimore, Maryland. You should visit this site.
*******


I had intended to post an entry last night but was much too drunk / tired when I got home from a happy hour that sort of morphed into a somewhat longer night out, but that was overall quite enjoyable (see below).
As for tonight, I just got back from the gym where I had a complete and good three-hour, three-part workout including jog (1 hour on treadmill), weightlifting (about 70 minutes, light to moderate), and a 20-minute swim (preceded by 5-minutes in the steam room and followed by a 10 minute shower).
All good.


I'm making dinner as I compose this entry. Pork chops, jasmine rice, and steamed broccoli and carrots. I still need to post my Sunday walk pictures.
Anyway, yesterday, I rode my bike to work. Actually, I picked it up from The Bike Rack where I had to take it Sunday as I had a monster flat tire in the front. I rode it from the store to work. About the ride, I should note that the National Mall isn't just tourist-clogged now (even with the slow arrival of spring this year) but also half fenced off with a massive reworking of the grounds that includes removal and replacement of vast amounts of dirt -- swapping in good soil for the severely compacted, rock-hard stuff that's there. 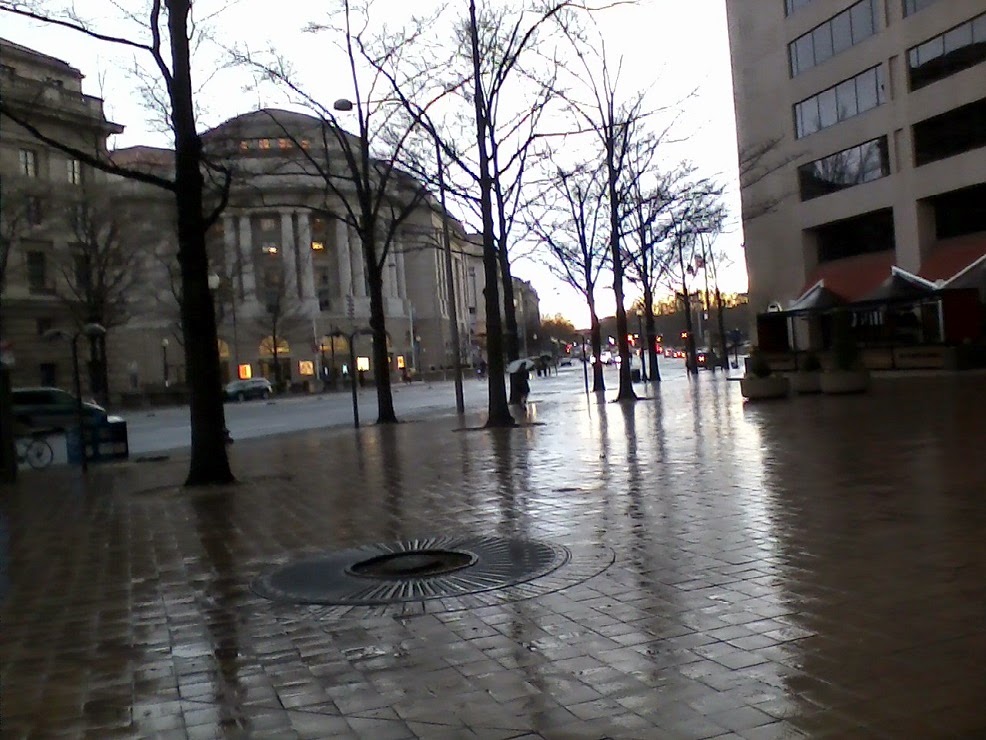 
After work, I went to Elephant & Castle on Pennsylvania Avenue. It was rather crowded for the annoying Tuesday night trivia (I had forgotten about that), but I found a spot at the bar. I was soon talking to a fellow named Ralf from Germany -- initially, for some reason I thought he was from South Africa and he played along for a while -- and we ended up in quite the confab over drinks. I then took him to nearby Harry's Pub on E Street where we had another couple drinks.
I biked home by about 1030PM -- arriving safely and soundly -- and proceeded to do YouTube viewing, specifically and disjointedly, clips of mid-1980s to early-1990s Baltimore television on WBFF Channel 45, WNUV Channel 54, and WMAR Channel 2, as well as clips of the 1984 movie version of Frank Herbert's epic Dune (subsequently ruined by his son, Kevin Herbert). This entry discusses only the Baltimore television clips. I might post the Dune clips in a subsequent entry.
Although I'm from New Jersey, I spent my (deeply and multifaceted problematic) teenage years in the Baltimore suburb of Glen Burnie with my mom and stepfather, Ray. This corresponded to the bulk of the period late 1982 - 1989 with some summer gaps (spent in New Jersey with my dad and my paternal grandparents at the Jersey shore) and the post-high school 1988 Seattle "U-Dub" stint).
The point is, I came of age, as it were, in the Baltimore area at this time (regularly readers of this blog know that I've had multiple entries over the years featuring Baltimore-themed topics), and well do I remember all many of the things I saw in those clips and immediately felt the zeitgeist of that period. 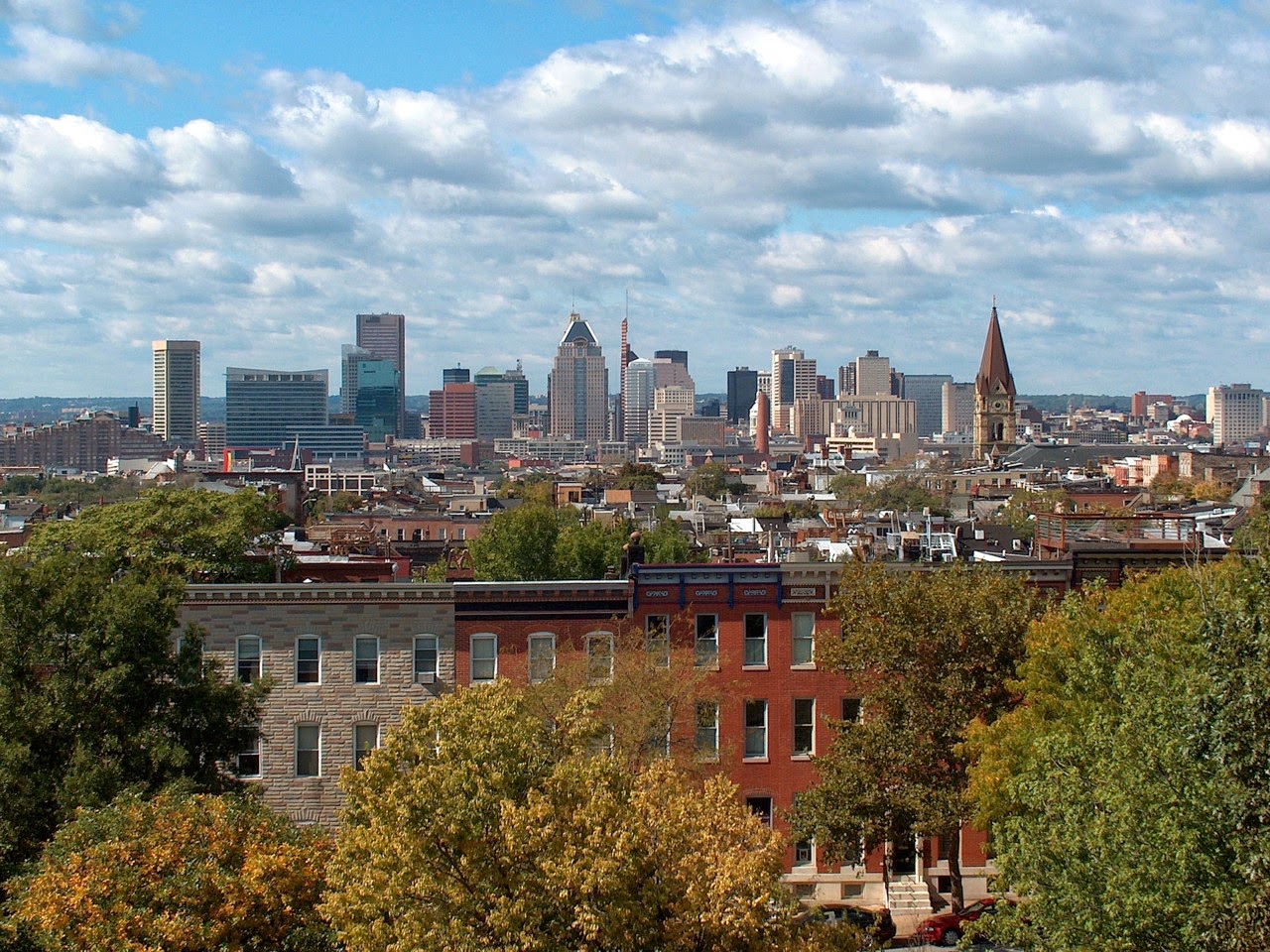 As for the clips, they disjointedly include commercials, promos for TV shows and movies, and the occasional news break. In the case of Channel 54, it also includes one of its "Pet of the Day" segments for which it was famous. It was surreal, as if I had stepped into a time machine back to 1988 or thereabouts.
I emailed several clip URLs to someone I knew from that time and later and with whom I had an exceedingly tumultuous relationship. Let's just call him "K". He is also part of the Wall-P crowd. He used to read this blog regularly but stopped -- possibly because he though I was talking about him in some of my comments about all my straight male former friends who got married and became buccal-pumping frogs on suburban lily pads. To be clear, I never meant him. He was far too self-aware and strong-willed for that fate. However, he is part of the Wall-P group and I don't talk to any of them anymore.
I don't think I'm going to hear back from him -- and if I do, it won't be a friendly reply.
The reason I sent K. the links is that he and I used to like a certain genre of low-brow, quintessentially Baltimore ads including those for the long-gone family-owned Luby Chevrolet with its famous "I Love Luby" take-off of I Love Lucy and a probably defunct store chain called Stop Shop Save (more typically referred to as "Stop Shop and Save"), although it still has a functioning website, and which had such a lovely little instrumental ditty to its ads.

Then there was the TRULY LEGENDARY commercials for Mr. Ray's Hair Weave, a business that purportedly played a role in inspiring John Waters for his movie Pink Flamingos. Mr. Ray's was owned by a white man, Mr. Ray (Towsend?), he of the Baltimore-accented voice never to be forgotten, but it catered primarily to African Americans. He is featured in the above YouTube clip. I can't quite make out his last name, nor can I find it printed anywhere.
This is the "latest" of the clips -- from 1991 -- and features a news break involving suitably breathlessly hysterical coverage of a "botched escape attempt" and "uprising" at a Maryland prison and a shooting and "chaos" at a Baltimore police station. It also includes a number of movie and TV show promos including for Star Trek: The Next Generation. Of note, this clip includes one of the Mr. Ray's ad. Oh, and it also has an ad for the painful-to-watch 1-900 chat lines that were so ubiquitous at the time.
As an aside, I used to really like the jingle for Channel 54 WNUV:
"Watch what were doin' now / We're 54 / And WOW! / You're gonna' see like never before!" (or something like that).
The uplifting musical score to it made me always think of soaring above Baltimore at night ... 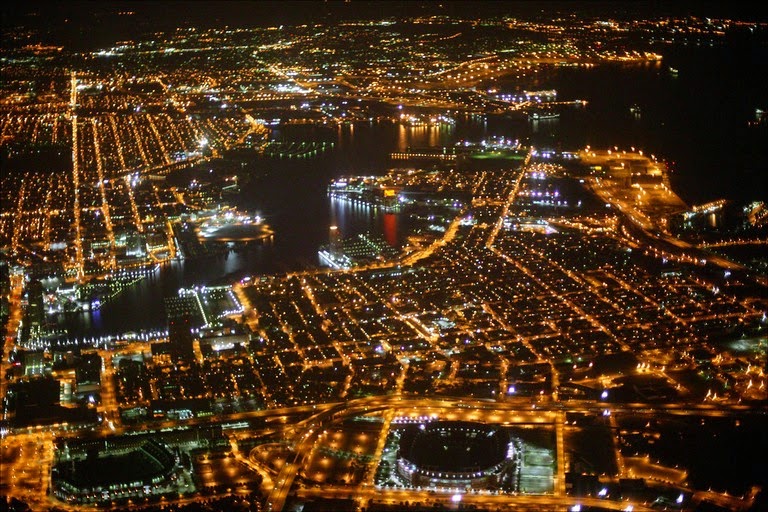 OK, this was from June 2005, not June 1988. It would have looked a bit different back then.
I should post a picture (taken from Wikipedia) of the two giant television transmitter towers atop Television Hill in Baltimore: 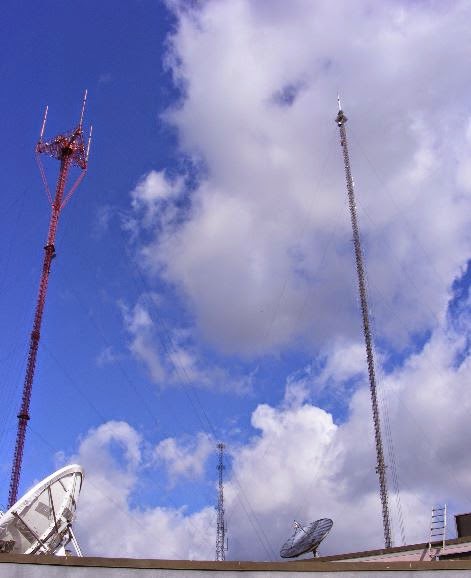 I recall the period before the second tower -- the taller, slender one -- was constructed. Prior to that, only the famous "candelabra" tower stood atop the hill in Baltimore's Woodberry section. That tower was raised at some point in the mid-to-late 1950s.
*******


Channel 54 also used to have "The Morning Movie" shown in the wee hours and it included (at least in this clip) Glenn Miller's In the Mood. (I also remember something called "The Starlight Express" movie feature but that might have been on channel 20 in D.C.)
A couple of famous Baltimore Orioles players -- specifically, Cal Ripken Jr. and Eddie Murray -- make an appearance in the ad for a now-defunct outfit called Theater Vision that was based in Rockville. (Theater Vision used to have ads featuring Washington Redskin football players as well, most famously, Joe Jacoby.)
Of course, Channel 54 also used to show dirty movies after a certain time at night with the signal scrambled, although occasionally it would briefly straighten up just enough to watch. It was all just the usual fare, except I was always trying (of course) to watch the guys.
OK, on that note I think I'll end this entry. It's already damn near 1:30AM anyway.
--Regulus
Posted by Regulus at 1:23 AM

I'm wondering how I can get a copy of one of the images. I'd like to create wallpaper with it.
Michele Araquette
House of Araquette Studios
410-929-1199
Michele@HouseofAraquette.com

The nighttime Baltimore photos are by photographer Jason Wilson. His website is here: https://metroscap.com/

I originally posted an image without giving him credit, and he was not happy about that. As it is, he has some amazing photography and I should have credited him.

So, any images you want, go to that site and contact him. I can't promise you what he will say. I will say, though, that you should probably open a new browser window and cut and paste that link. If you try to link directly from my blog, it might not go through.