Billie Holiday's 100th birthday may have come and gone this past week, but Lady Day's music lives on forever, and in that spirit, let's get this jukebox Saturday Night entry started on the right note ...
"All of Me" as performed by Billie Holiday in 1941 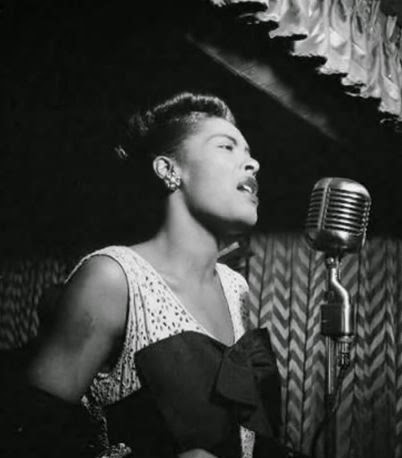 "All of Me" was written by Gerald Marks and Seymour Simons in 1931, it was first recorded by Ruth Etting in December of that year although Belle Baker first sang it on the radio (or so says the Guardian of All Knowledge, Wikipedia). The Billie Holiday version is from 1941 on, the OKeh Records label and features Lester Young as tenor sax.


Here's a song that is past due for featuring on my jukebox Saturday night entry ...

"Young Hearts Run Free" by Candi Staton from her album of same name (1976)
The song made it high on the charts including #1 on what was then called the Hot Soul Singles, itself just one of a series of names that started with the Harlem Hit Parade and today is called the Hot R&B/Hip-Hop Songs.
This video features a live performance by Staton on some long ago TV show in 1976 (quite possibly outside the US). It has both a beautiful melody and wonderfully uplifting lyrics. Staton, 75, is still going strong. Her website is here.
*******


Let's end on a more Saturday night energetic note ...
"Eyes" by Kaskade ft. Mindy Gledhill from his Fire & Ice release (2011)
I already posted this video back in this entry last November that was not a jukebox Saturday night one, but I think it warrants a re-posting in this weekly series. As I wrote in that entry, I really like this song and video. It's a great combination of trance-like House music -- fast-paced and energetic yet melodic and mournful -- and the video with all its time-lapse city and kaleidoscopic imagery has a touch of the "Koyaanisqatsi" feel. I quite like the DJ Kaskade. He's an interesting fellow all around.
*******


OK, that's all for now. I'm meeting Fred for dinner and then will go to No. 9 or perhaps even Nellies.
--Regulus
Posted by Regulus at 9:08 PM