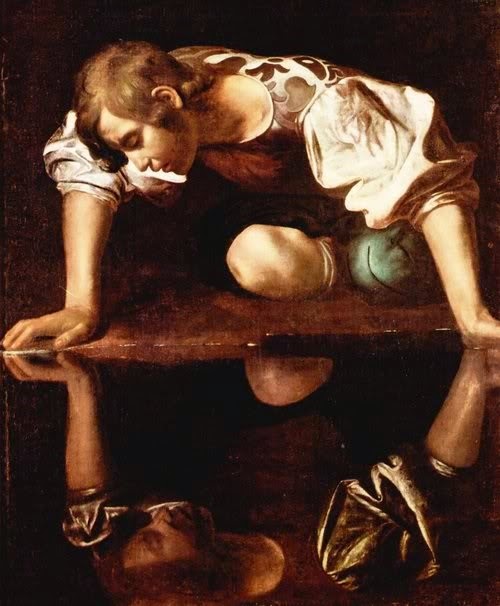 **This entry doesn't feature many pictures. I may try to post more later.**


If I may do something unusual (for me), I would like to indulge in a bit of narcissism ...
... and I do so despite the fact that I'm a 45-year old man of small stature with once dark-brown hair still full but now semi-ashen gray, an appearance that while not ugly is certainly slightly odd and that you might want as your good luck charm in certain situations but that is in no way a turn on to anybody except the bewildered, the nutty, the desperate or neurotically introverted, the scheming, the weekend late night very drunk, the self-loathing, and the you've-already-lost-in-this-life-so-why-not ...
At the outset, though, let me say that I'm feeling much better after what felt like a near-death experience on Tuesday night with my sinus infection (now under control with an antibiotic and two other over-the-counter treatments.
I went to the gym tonight and had a great workout including a 6.61 mile jog over 60 minutes plus 5 minute cool down (although I set the treadmill course incline at 2% average rather than 4% average, a huge difference, except at the very end when I raised it to 4% on the hardest of the New Zealand South Island course segments, Skippers Canyon Road).
More importantly, I had a solid 75 minutes of decent weightlifting including some free-weights (60-lb barbell and 30-pound dumbbells). It also included about 15 minutes in the small side studio with mirrored walls and soft lighting (albeit confusing lighting controls with different switches that may or may not work on different nights for three different sets of lights). I did a "core" workout with sundry moves including a couple that Milan showed me last night.
The fact it was so strenuous was good, although I can't do those for more than 10 to 20 seconds at a stretch. I really need to build up my strength and stamina there. It also serves my goal of getting at least some of what I estimate to be about 15 pounds of remaining mid-section middle-aged man flab to tighten up and/or go away.
I was alone in that little studio and just pondering my various reflections that on the far wall stretched off into infinity in a sort of mirrored tesseract as I lie on my back on an unfurled matt, I mean, mat in this quiet side room, no music playing from the outside main area (the music has not been a problem in recent months), and the gently whirling fan overhead.
Perhaps it was just the subdued lighting, but in my bright blue gym shorts, work out shirt (a dark t-shirt tonight), and white socks (having removed my sneakers since they weigh me down doing those mid-section exercises), and with my hair its current length, and a BORDERLINE upper body physique, I thought, "Gee, I don't look THAT BAD."
Of course, I am 45, not 25, and not dumb, so I won't be showing anything off.
Anyway, I finished up in that little side room, changed into my bathing trunks and went first to the steam room, then a quick shower, and then into the swimming pool, where I had a short but refreshing swim, another shower, and got dressed and left. Fred was there and we left at the same time.
So that was my gym visit. Oh, yes, I forgot to mention: I weighed myself: 144 pounds, not far from where I've been since late 2013 / early 2014, but perhaps reapportioned better a bit.
************

My earlier day was also fine. 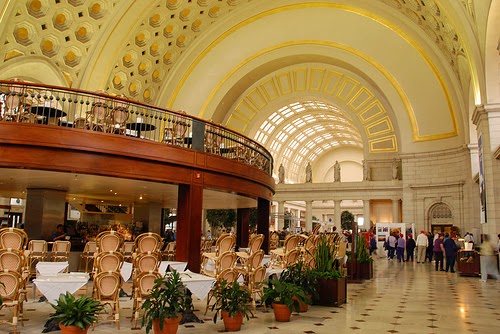 The Center Café in the grand hall of Union Station from a picture I found online here.
*******


As planned, my mom took a MARC train into D.C. to Union Station and we had lunch there. Andrea also joined us. We were supposed to meet at Thunder Grill but mom arrived at 10AM rather than the agreed upon 1130AM -- 90 minutes early, which is a lot even for her -- and I had to quickly head over from the office where I had arrived a short time earlier to meet her.
Because it was so early, Thunder Grill wasn't open. Instead, we went to the Center Café in the main vaulted hall. It was quite nice and very pleasant. As for the rest of Union Station, it's just big, frenetically crowded, and (depending on where you are) a touch sketchy.
As she used to see me off at airports when I was a little boy, so I saw her off on a MARC commuter train back toward the Baltimore area, or rather, suburban Maryland / Anne Arundel County where she lives, and I headed back to work.
OK, that's all for now. I was going to try to post another entry tonight but at this point, that's probably not going to happen. If I do not, I will not post one until Saturday. I'm skipping any blogging tomorrow (Friday) night.
There are still entries I want to post on regional and world happenings last week with political commentary, but those will have to wait (if I ever get around to posting them).
--Regulus