Arrakis. Dune.
This is the opening "title card" of the 1984 movie version of Dune.


Before I write my planned Friday evening entry, let me just post the second half of the discussion from my previous entry, namely, the Dune clips I watched on Tuesday night / early Wednesday. 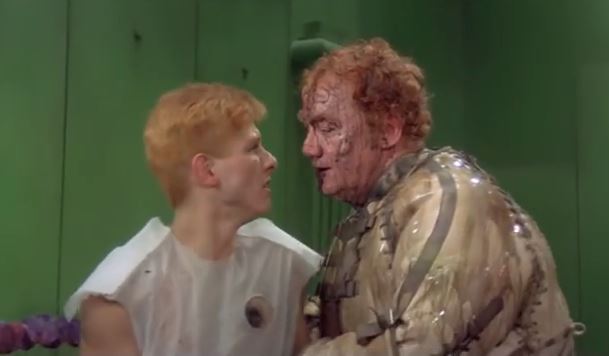 The psychotic, pustule-covered Baron Harkonnen and his young male victim.
The image above and the one directly below are screen shots from the YouTube clip -- also embedded below -- of the epic 1984 David Lynch movie version of Frank Herbert's amazing epic Dune series. The images show the beyond-disgustingly repellent, psychotic, sociopathic Baron Vladimir Harkonnen -- as played by the late actor Kenneth McMillan -- as he kills a nameless male slave (who had been forced to enter, terrified, to place some purple flowers on a rack). 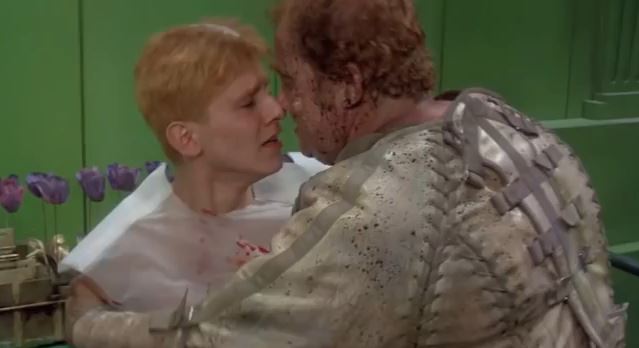 Another screen shot of the Baron and his young male victim as he dies.
To be clear, Dune the movie was not well-received at the time. Today, I think it is recognized (at least among Dune fanatics) for the truly great cinematic work that it is. As for the Dune novel series, it was subsequently ruined by Frank Herbert's son Brian Herbert and his sidekick, Kevin J. Anderson, in a painful-to-read series of prequels and sequels. That aside, for an even-handed overview of Frank Herbert's life and how the Dune series developed, here is a good site.

Oh, and if you are interested in how the Herbert empire works these days when anyone screws with the new "canon," see here. 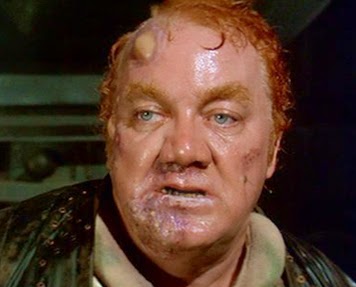 The Baron gets some grotesque psycho-sexual thrill out of it while others (including Sting's character, Feyd-Rautha Harkonnen) look on with varying degrees of glee and/or horror. (The Baron is strongly implied to be homosexual -- I won't even use the term "gay" for these purposes.) 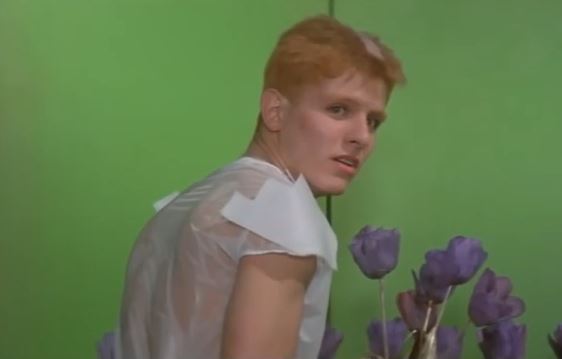 The Baron's terrified young male victim moments before his death.
The Baron pulls out some heart plug device and the slave dies a horrible but quick death while the Baron presses on top of him. It's kind of ghastly and disgusting. The clip is here if you want to watch it. (I don't particularly feel like posting it here.)
Anyway, I was trying to figure out who played this hapless, silent victim in the Dune universe (a universe I consider to be quite horrifying). He doesn't show up in the credits at all. After rooting around a bit, I think I now know: Mexican actor Ernesto Laguardia. 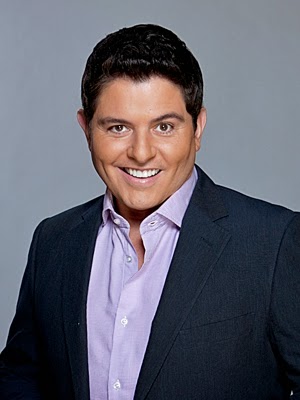 Laguardia is 55 but was only 24 at the time of the movie. He looks rather different, and I'm not entirely sure it is actually him. This Spanish language article about him suggests that it is, as does his Wikipedia page.


Laguardia doesn't seem to advertise this role from so long ago, and it's not surprising given the kind of acting career he has had on Mexican television. That aside, I think this resolves the issue. By the way, here is his Twitter page.
One of the best things I like about the David Lynch movie adaptation of Dune is the opening in which Princess Irulan, eldest daughter of the 81st Padishah Emperor Shaddam Corrino IV, provides a scene-setter. There are actually at least two versions of this opening. Played by actress Virginia Madsen, she does an awesome job with the introduction. (The character of Princess Irulan is only a bit player in the actual movie and original series.) 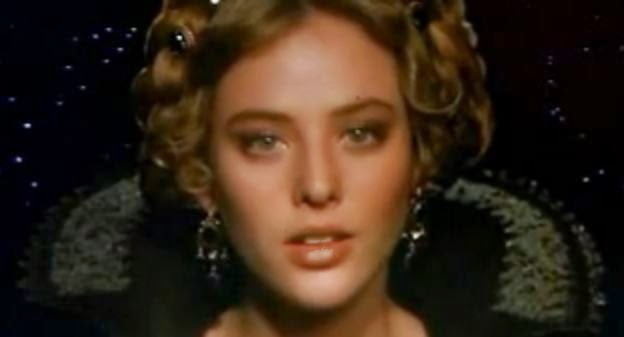 "The beginning is a very delicate time. Know then that it is the year 10,191. The Known Universe is ruled by the Padishah Emperor Shaddam IV, my father. In this time, the most precious substance in the Universe is the spice mélange. The spice extends life. The spice expands consciousness. The spice is vital to space travel. The Spacing Guild and its Navigators, who the spice has mutated over 4,000 years, use the orange spice gas, which gives them the ability to fold space. That is, travel to any part of the Universe without moving. Oh, yes, I forgot to tell you: The spice exists on only one planet in the entire Universe. A desolate, dry planet with vast deserts. Hidden away within the rocks of these deserts are a people known as the Freman, who have long held a prophecy that a man would come, a Messiah, who would lead them to true freedom. The planet is Arrakis, also known as DUNE."
Here is the clip I used:

Here are some additional Dune thoughts ...
(1) The year 10,191 is in the so-called "Universal Standard Calendar" that is dated from the establishment of the Spicing Guild, so it is an A.G. (After Guild) date. The year 0 (or "1") A.G. is set about 11,000 years in the future. On the Dune Wiki pages, the A.G. article gives a precise date of AD 11,075 -- meaning that 10,191 A.G. is AD 21,266 (and AD 21,267 if there is a Year Zero problem). However, the Universal Standard Calendar article presents a less precise date of 0 A.G. equals "about" AD 11,200 and throws in a complication about the Butlerian Jihad (in which "Old Earth" was destroyed).
(2) I don't like that the Dune universe is the entire "Known Universe" -- that's absurd. Of course, when Frank wrote the original Dune novels, the concept of galaxies as "island universes" in a vastly larger "observable Universe" and near-infinite total Universe did not exist. 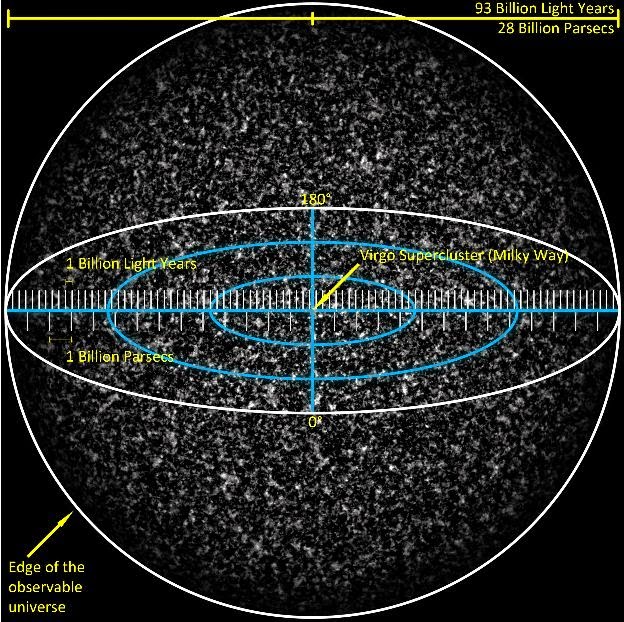 A schematic representation of the Observable Universe -- sometimes called, a bit misleadingly, our Hubble Volume -- all the way to the co-moving cosmic horizon put at 46+ billion light years away (or 93 billion light years in diameter). This is the age of the Universe (or at least since the time of last scattering about 380,000 years after the Big Bang, plus an expansion factor of space.
These scales are impossible to comprehend in any meaningful way.
*******


(3) The idea (as developed in the original book series) is that the 1,000+ foot long sandworms have evolved from aquatic fish (sand trout) and have encapsulated all the water of Arrakis deep underground. The sandworms "swim" in the "oceans" of sand dunes that cover the world. The sandworms create the spice -- melange -- or rather, a precursor to it that "blows" onto the surface and is transformed in air and sunlight into the spice. The sandworms don't like having their spice taken. Virtually the entire human race -- spanning "the known Universe" -- is hooked on the spice and it all comes from Arrakis.


(4) While I hate the idea of an all-desert world ("pole to pole") -- well, OK, I guess Mars counts as one -- Arrakis actually is supposed to orbit the star Canopus, a ginormous and somewhat unusual "yellow white giant" star. Canopus is kind of awesomely big and bright. 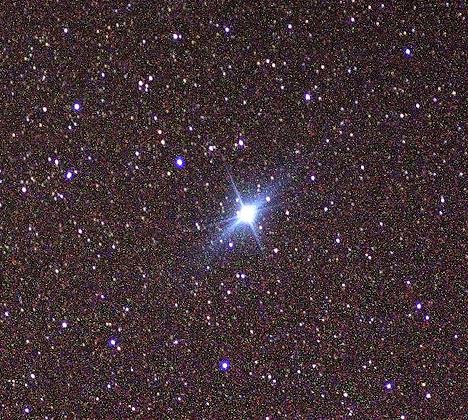 CANOPUS!
Alas, one simply cannot see Canopus north of the latitude of Richmond, Va., so it is just below the horizon here in Washington, D.C. Boo. However, I've seen Canopus is south Florida.
(5) Lastly, the Guild Navigators are really freaky and gross, in partiuclar in the Lynch film version The idea is that they are in these giant tanks of spice that has mutated them into what they are. I'm not clear if they start out as regular human beings that undergo a mutation or -- as the Princess Irulan intro suggests -- actually evolved this way (which would imply some form of reproduction). For more information on the Guild Navigators and their mutations, see here. 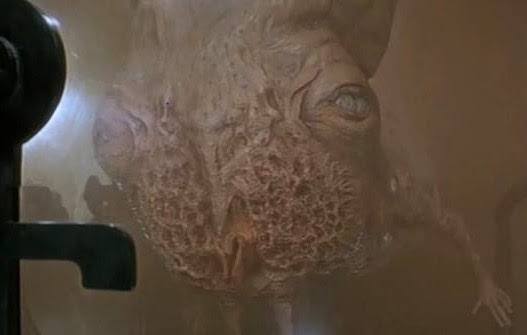 
OK, that's all for this entry. I would like to post one more -- and I'm going to try to do so -- but, realistically, it might not happen this evening. In that case, my next planned update would be tomorrow after my regular gym visit.
--Regulus
Posted by Regulus at 8:52 PM

Just to confirm that the Baron's victim is indeed Ernesto Laguardia. Though he has an extensive career in Mexican soap operas, Dune remains as a highlight of his resume as it was his only flirt with Hollywood and a big fancy Director, the hope of a global stardom that never was.

The movie was shot in Churubusco Studios in Mexico City, so a lot of the smallest parts were played by respected mexican actors, besides the extras and technical crew being local as well.

I did not know that about the studio location for filming the movie. As for Mr. Laguardia, I actually could not tell if that was he because that young man in that terrible scene is so young and thin, has almost orange hair, and just appears so different.

Anyway, thank you for the info and topping by. I truly appreciate it ...

He was thirty years younger, sixty pounds lighter, and his hair was dyed for the movie, since he always went with his natural dark locks in the future.

By the way, the actual "dunes" were shot in the Samalayuca Dune Fields in the Mexican state of Chihuahua.

You are correct about Mr. Laguardia's appearance and weight and the passage of time...

I didn't know that about the dune fields used in the movie.

My understanding is that Frank Herbert was inspired, in part, to write Dune by the dunes of Oregon Dunes National Recreation Area on the Pacific coast.