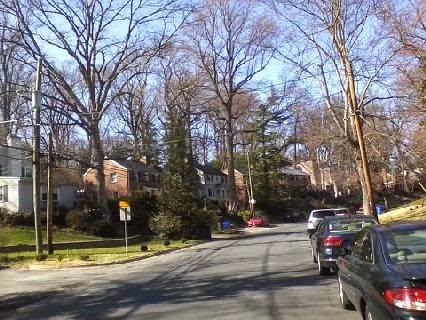 
This is my late night Monday / now wee hours Tuesday entry. Some of the pictures are ones I took on Saturday night while having dinner at the front bar at Ted's Bulletin on 14th Street and the next day riding my bike to Quill's parents' house in Silver Spring (discussed below). They don't particularly relate to anything in the entry. The California drought pictures are taken from various CWG and other  online WaHoPo articles.
However, it must necessarily be a short posting because I really want to get to sleep, in turn because I want to get into the office about an hour earlier than I usually do.

Clarification: It was intended to be a short entry, but obviously, it didn't turn out that way. 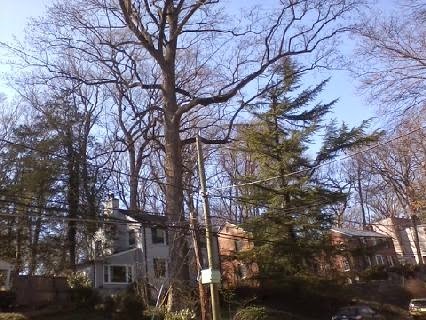 
I'm back home from a good gym workout, although I must say that I didn't think that was going to happen initially as I actually felt a bit dizzy when I first got on the treadmill. However, I made it through the 60 minute job plus 6 minute cool down, and then had a decent round of weight-lifting and a short swim.
My workday started out slow but then got busy with two assignments that I need to finish tomorrow -- hence the need to go in early. 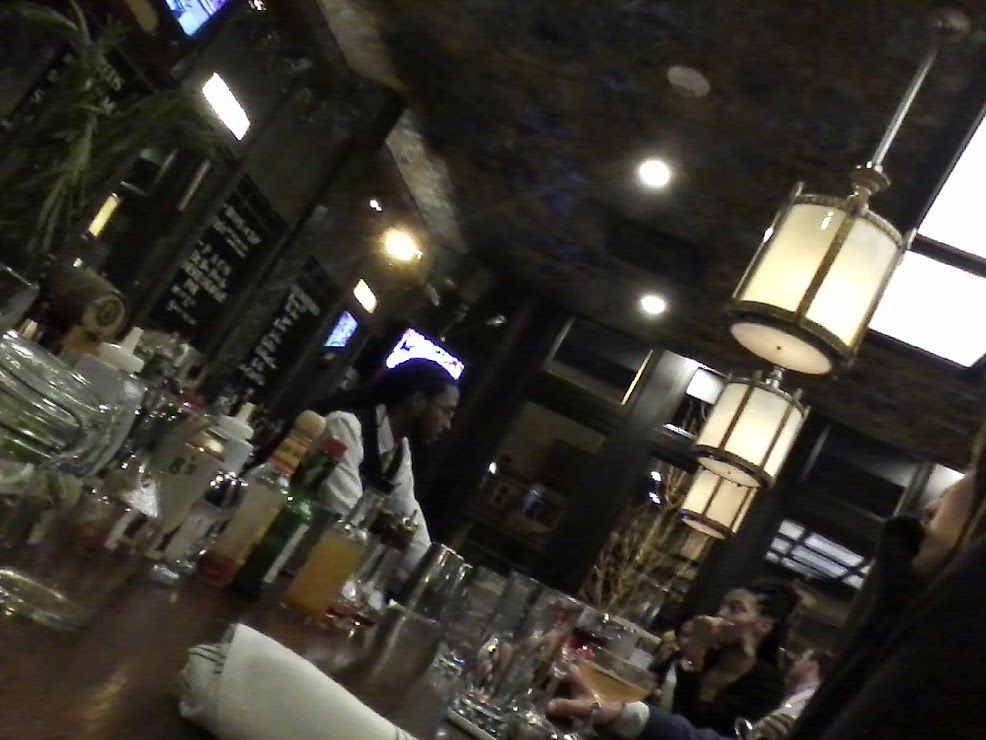 The front bar at Ted's Bulletin on 14th Street NW, Washington, D.C., 10:39PM April 4, 2015.
I went to this Ted's Bulletin for dinner on Saturday night, and it was quite nice including the music being played which was, yes, jazz. (One of the interminable "March Madness" basketball games was being shown, but with no volume, only closed caption.) (Isn't it April already?) Oh, yes, that lady talking to the bartender reminded me very much of the singer Res (Shareese Renée Ballard). In fact, at one point, I thought it was she.
*******


My Easter Sunday was quite nice at Quill's parents' house in their tranquil suburban Silver Spring home on a quiet residential side street. We had Easter dinner, not to mention wine and even a scotch (although Quill never touches a drop of liquor). Her parents had invited a young couple from their church and her brother, who I hadn't seen in perhaps two years, was there. 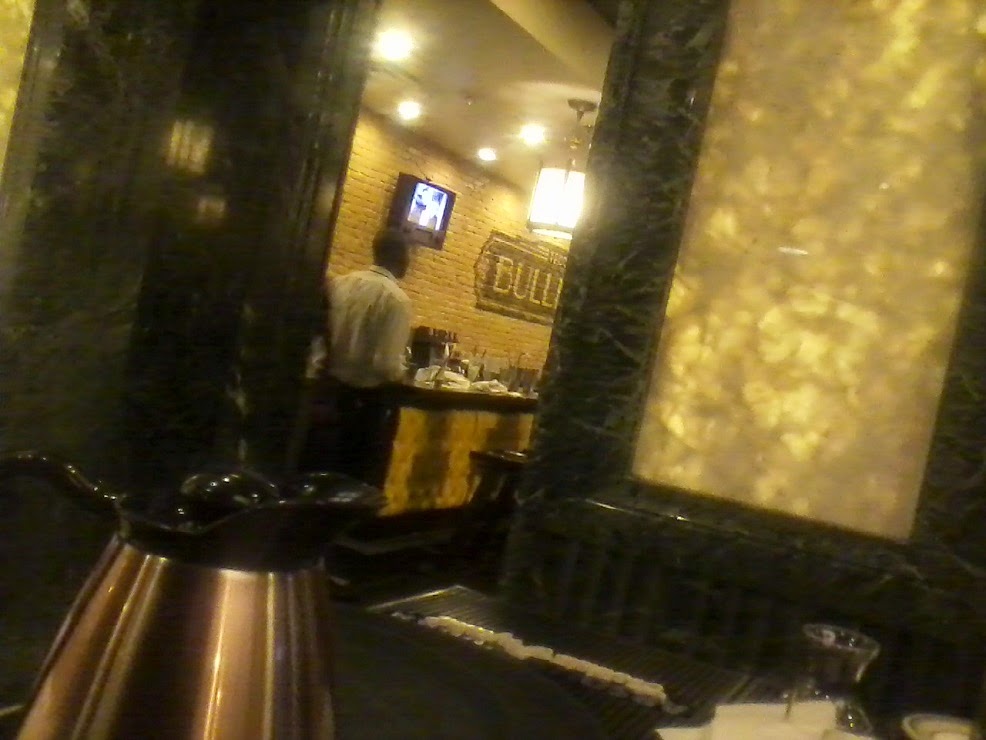 Ted's Bulletin, 14th Street NW, Washington, D.C., 11:08PM April 4, 2015.
There are a few Ted's Bulletins in D.C. This one is on 14th Street NW.
*******
I took the bike on the Metro to Silver Spring station and rode to their house and then did the same in reverse upon leaving, although the return trip involved crossing Colesville Road (on the Sligo Creek bike trail) and biking up Pershing Drive into downtown Silver Spring on a route that was familiar to me during the 6 months I lived in that area with Phil in late 2004 and 2005. 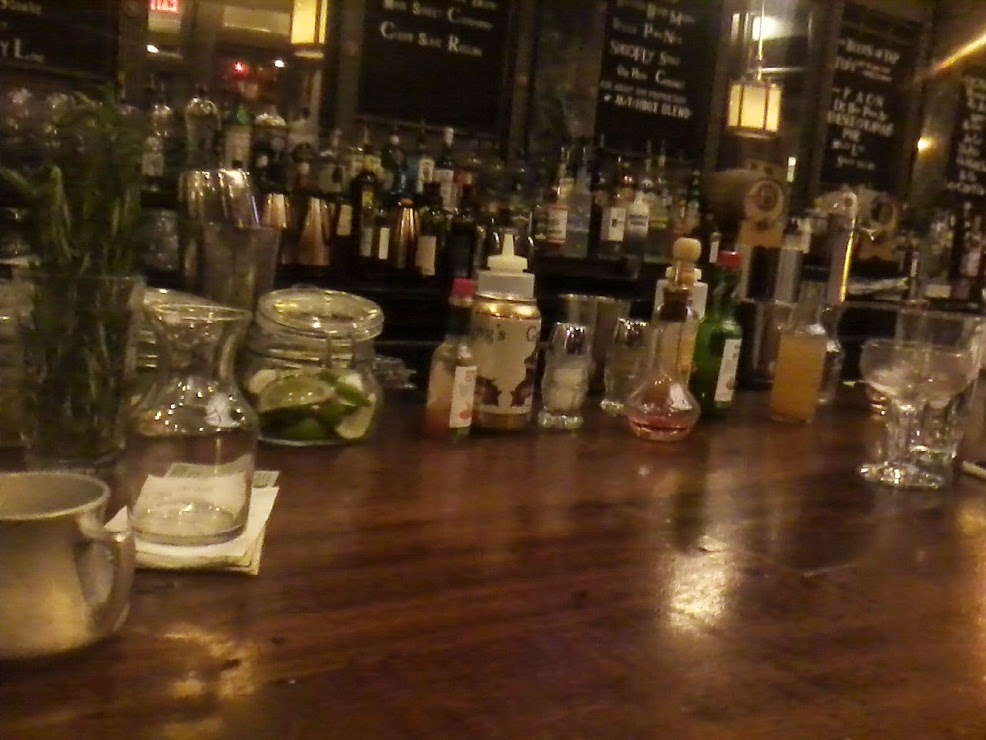 
Brunett Avenue runs under the Capital Beltway and is my usual access point to get "outside" and then back "inside" the Beltway. (To be clear, her parents live near the Four Corners area just outside of the Capital Beltway.)
Everything was fine in the nighttime ride back, except I missed a turn and tried to turn the bike too fast and fell off it. Fortunately, there were no cars nearby. Also, it was just low impact enough that I didn't cut my right knee, which is what hit the pavement. I was able to stop the rest of me from hitting it with my hands. 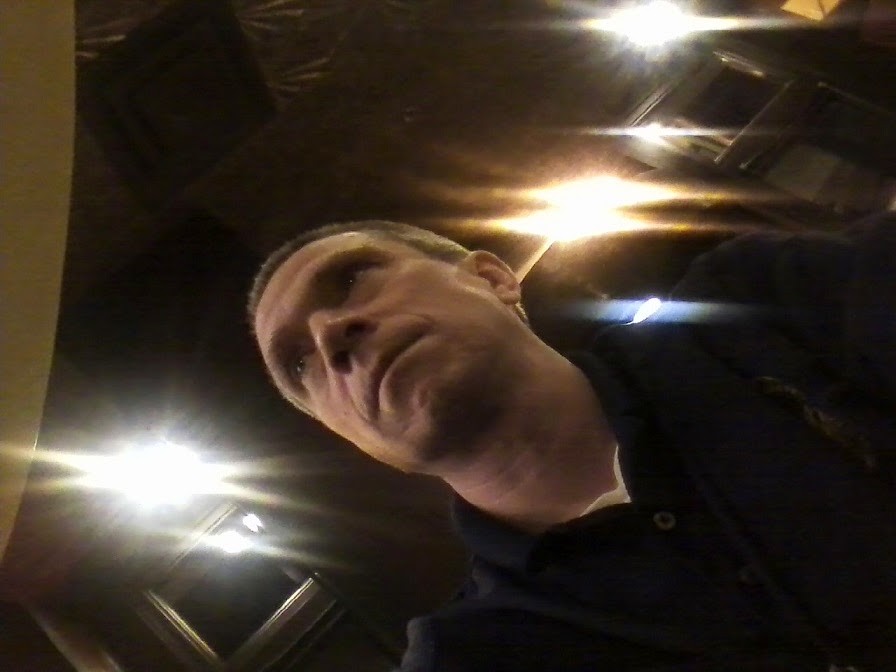 
As for the weather, it's a mild night following a rather warm day (Monday) with temperatures that reached 77F at KDCA and 76F at both KBWI and KIAD (none of these were any where near the daily records).
Yes, the frickin' cherry blossoms (read: the Yoshino "Japanese" cherry trees, in particular those on the damn Tidal Basin) -- and, indeed, many of the varieties of blossoming trees area-wide -- are starting to flower. 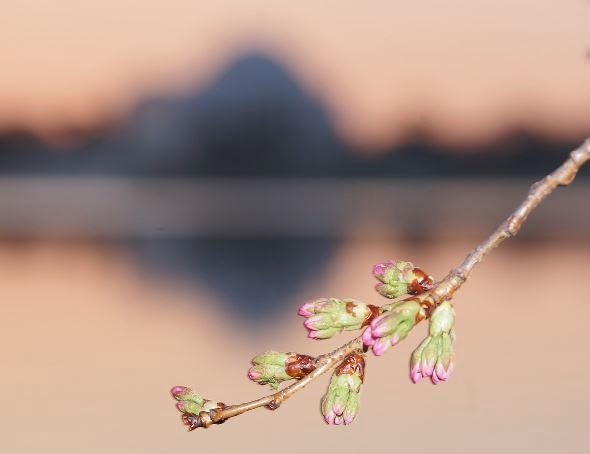 
The Tidal Basin ones should be at peak in a week, which actually bumps up against the culminating National Cherry Blossom Festival parade on Sunday, and perhaps is even a few days after it (something I've never experience in my years in D.C.).
The Kwanzan cherry blossoms -- my personal favorite cherry blossom tree -- should come out in toward the end of the month, depending on whether it stays warm or not. 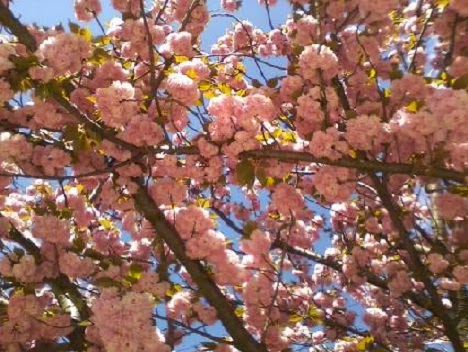 The Kwanzan cherry blossoms at peak as seen in at the Grosvenor Park complex, Rockville, Md., on April 20, 2013.
To be clear, I took this picture while visiting LP.
*******


Tree pollen levels are surging, and I had to take a Claritin. However, that seemed to produce an odd reaction that I don't normally get, namely, I felt slightly light-headed today. Of course, it could have just been the sudden warmth. 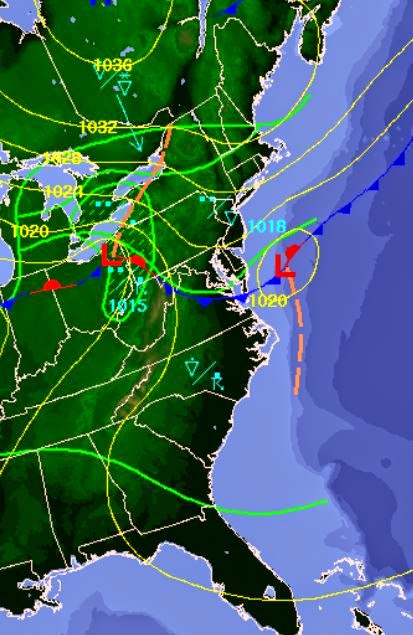 The good news is that a quasi-stationary frontal boundary is forecasted to set up over the Baltimore / Washington area with a prolonged period of intermittent showers and cool weather in the vicinity of the front (50F-ish) while it will be much warmer to the southwest into the Blue Ridge and Shenandoah (75F-ish).


Above: The 48-hour U.S. East Coast surface weather map forecast valid 12Z April 8, 2015.
To be clear, this is good because the rain washes the pollen out of the air. Furthermore, I just like cool weather because every day that isn't 80F+ (to say nothing of 90F+) between now and mid-October is just a "bonus day" for me. Tomorrow is still forecasted to be around 70F before maritime air mass arrives.
California Drought Update ... 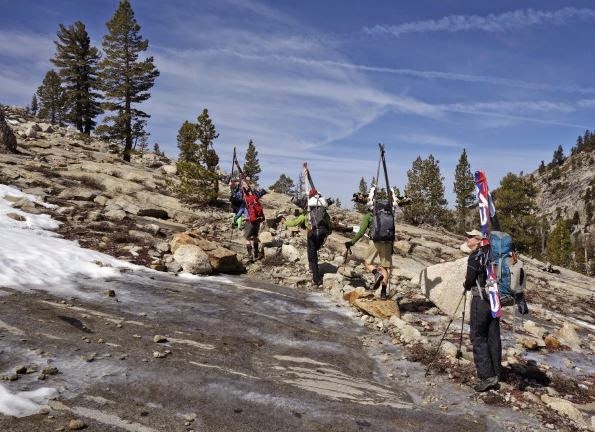 
On the West Coast, a low pressure system is bringing desperately needed rains to the northern half of California with higher elevation snows. Even San Francisco should get in on the act, although the area around Eureka is getting the most.

However, the monster drought afflicting California -- where a mandatory statewide reduction of 25% is now in effect via Governor Jerry Brown's April 1st, 2015 executive order, -- is such that even 2 to 4 inches of rain and a foot of snow in the Shasta-Trinity National Forest isn't going to make any meaningful dent in the situation. 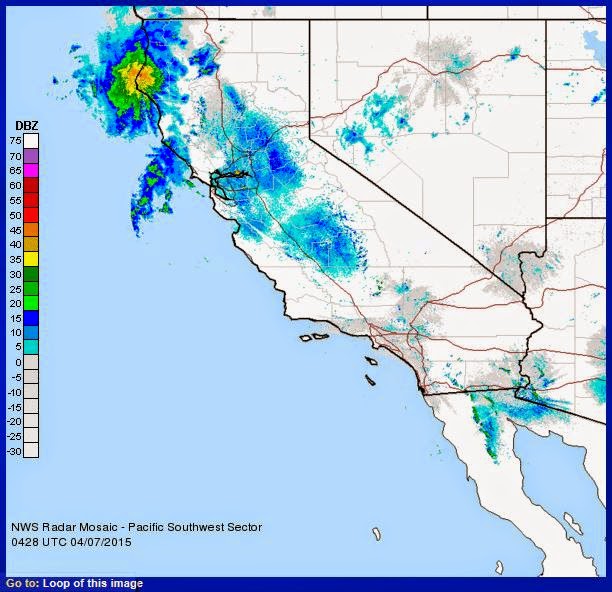 
More reductions are going to be necessary, in particular in the water-devouring agricultural sector, Gov. Brown's resistance notwithstanding. Consider that the statewide snowpack average of the Sierra Nevada Mountains is put at 5% of normal -- a truly scary low number that far surpasses the previous low of 25% set in 1976-1977 and 2013-2014. (Snowpack records go back to 1950.) 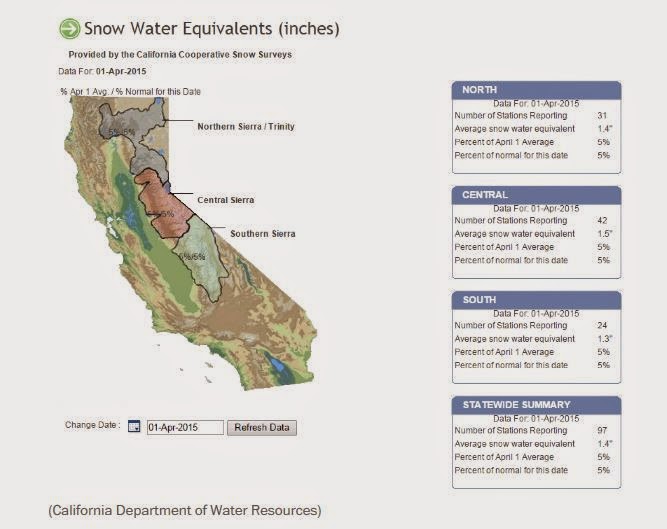 California mountain snowpack percentages by region as of April 1, 2015. They all show 5 to 6 percent totals.
This is a admittedly a blurry image taken as a screen shot from an image embedded in on of the CWG entries linked above.
******* 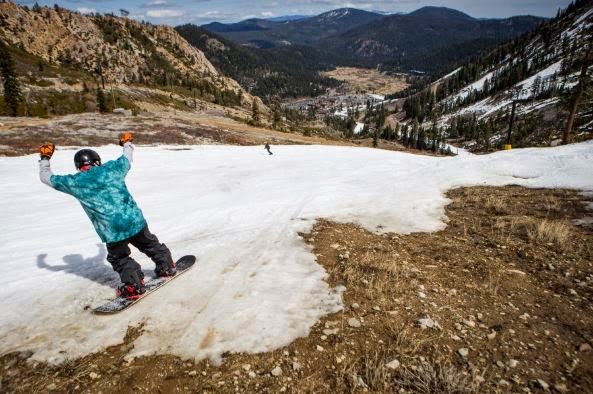 
The Capital Weather Gang had this entry (link embedded), Immense seasonal rainfall deficits put California storms into perspective, that features four-year rainfall deficits for places in northern, central, and southern California. The numbers are so enormous that they are best measured in number of seasons below normal.
Thus, the 4-year 32.99 inch deficit shown for San Francisco (unsure if it is the airport or downtown station) is equal to 2.5 seasons' worth while L.A.'s 4-year / 31.65 inch deficit is equal to 3 seasons' worth of needed precipitation. 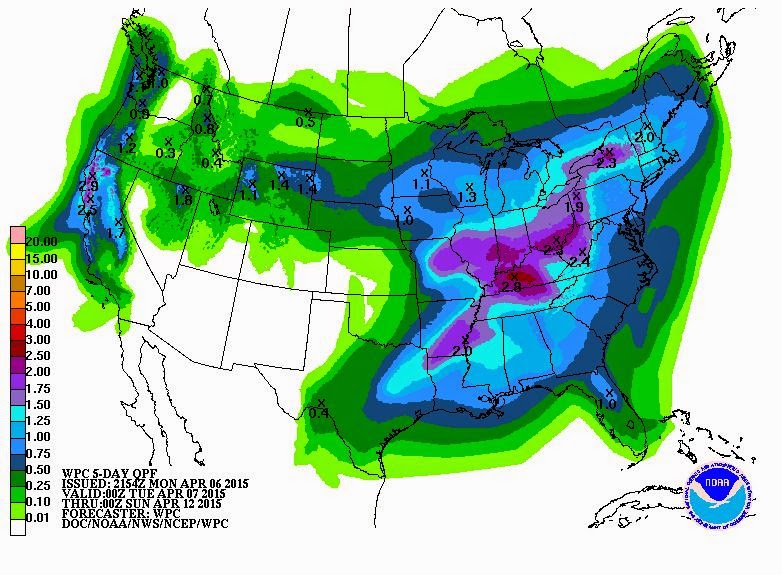 
That is all for now, except for one last important item ...
Lady Day's Centennial 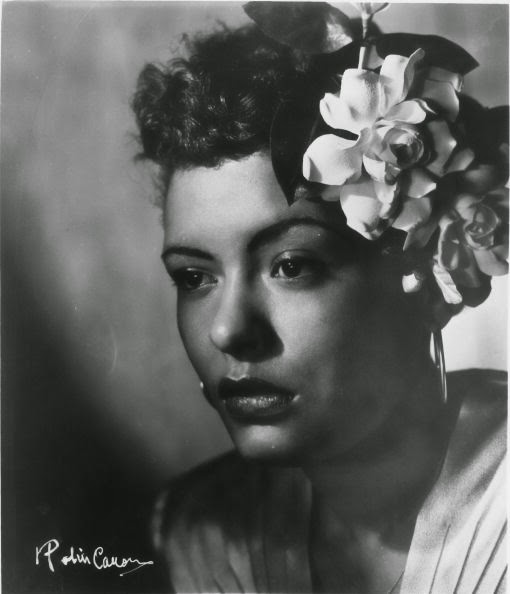 I have to note that today (April 7th, 2015) is the 100th birthday of the incomparable Billie Holiday, a.k.a., "Lady Day," and though she passed away many years ago at far too young an age (in 1959 at age 44), she so fully lives on her awesome singing and songwriting, her eternal gifts to the world and despite (or perhaps because of) her own very difficult life. Her website commemorates her 100th birthday far, far better than I could, and I highly recommend you visit it.
We love you, Lady Day.
*******


OK, that's all for now. I am most likely not going to update the blog tomorrow night (i.e., Tuesday). It's a non-gym night and I don't even think I'm going to take the computer home. My next planned update will be late Wednesday or early Thursday.
--Regulus
Posted by Regulus at 1:55 AM