Easter Sunday 2015: Jesus and the GOP Are Risen! -OR- In the Name of the Father, the Son, and Wholly Crazy Republican Spirit 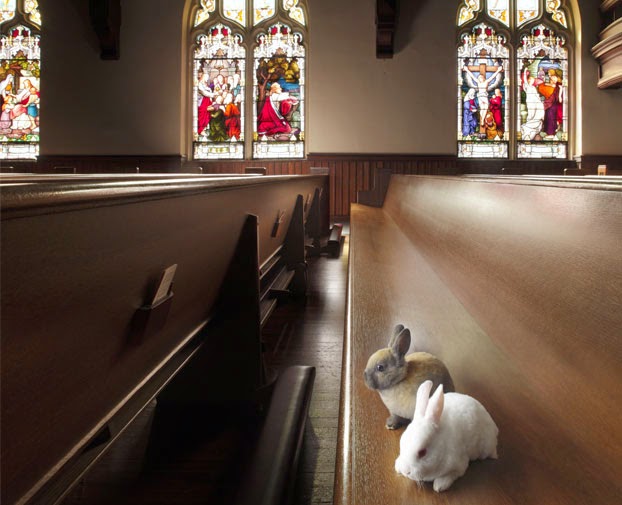 
Not much time to write today as I am going to a friend's parents' house in Silver Spring for Easter late afternoon dinner. I suppose I need to take my bike. I'll ride it to the Metro and then take it on the train to Forest Glen and then ride it again to their house. As for coming back, I'm not sure at this point. Usually, I just ride it all the way back, but I'm not really feeling up to that now. I'll see how I feel at dusk. 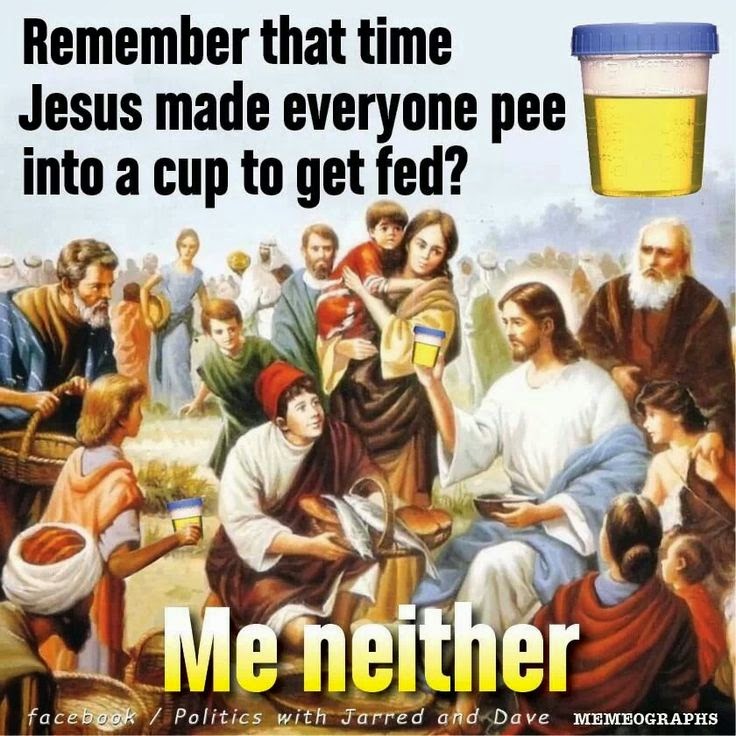 It is Easter and so it's just a good a time as any for a political-themed entry ...
Given that it is the holy Christian holiday of Easter, I would like to note that Republicans at the state level continue to show why state governments are truly dynamically innovative laboratories for finding new ways to criminalize poor people.
In this case, some quasi-fascist GOP ass-hat in Missouri named Rick Brattin -- after seeing some bullshit, wildly misleading (if not outright fictitious) story on Fox News and using that to create public policy -- has decided to propose legislation banning the use of food stamps to buy "steaks and seafood," and presumably to get them to eat dog food and leavings in dumpsters. 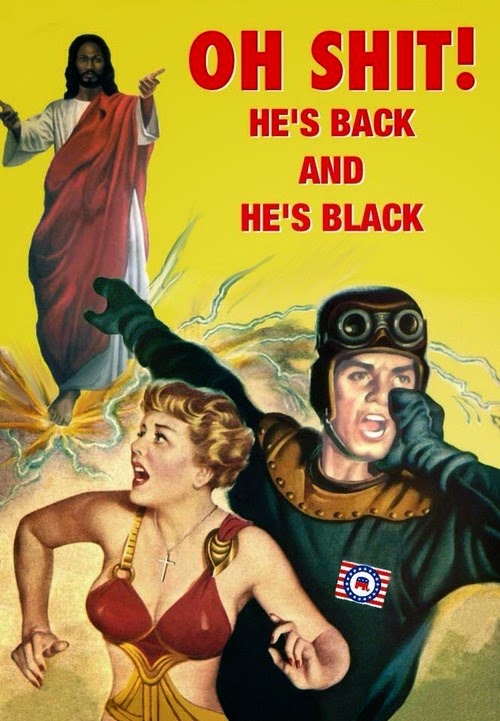 Ha ha
The ultimate goal, of course, is to gas all poor people, in particular non-white ones. Or at least put them in prison labor camps. It's the GOP way. As Paul Krugman noted in this great blog entry, it has been the aim of the GOP leadership to have a massive deflationary depression and "that Muslim Kenyan Socialist" Obama ruined the chance for them this go around.
In the case of Missouri, I also suspect it's probably a stealth effort at revenge because of the whole Ferguson mess. 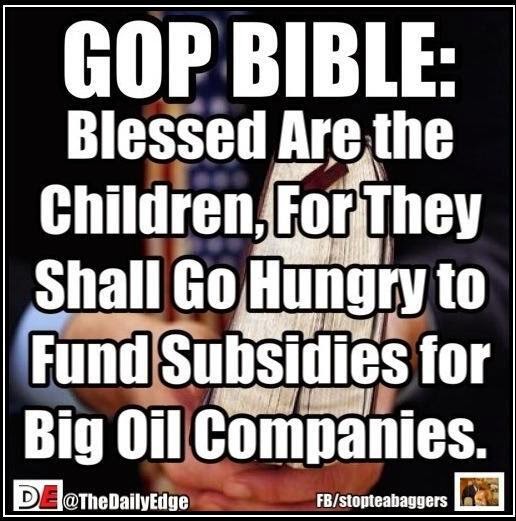 Meanwhile, the GOP Conservative Entertainment Complex (to borrow a phrase used on the Plum Line blog) continues to successfully fleece the fundie faithful for every bogus cause under the Sun, in this case, for the two days of trauma suffered by the O'Connors, owners of Memories Pizza somewhere in Indiana as a result of the whole "RFRA" eruption in that state that actually ended surprisingly well for people supporting tolerance, even if Mike Pence is still loathsome. 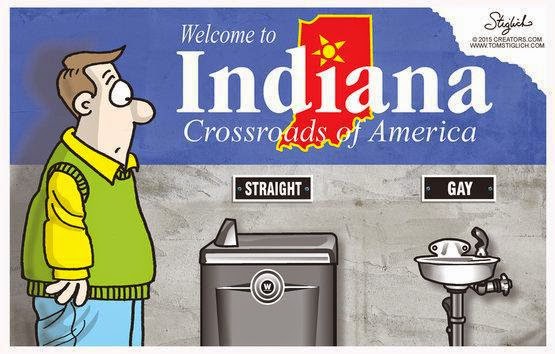 True, the internet trolling campaign against these dumbass people was horrible -- the internet, in general, is a dirty sewer -- and did our side no favors, but at the end of the day, the whole thing is coming up like a lottery ticket for them. All the more so given the absurdity of the notion that any gay couple would want a pizza-themed wedding for Memories Pizza to cater. It's right out of an episode of Parks and Recreation.
Having said that, I guess this outcome (giving money to some small town Middle American pizza restaurant owner) is better than the usual professional fleecing of the GOP base, whether by uber-huckster Mike Huckabee, the carnival sideshow of the nihilistic charlatan that is Ted Cruz, the endless "scam PACs" that Citizens United is helping to facilitate, and all the other snake oil peddled on a wide range of matters. 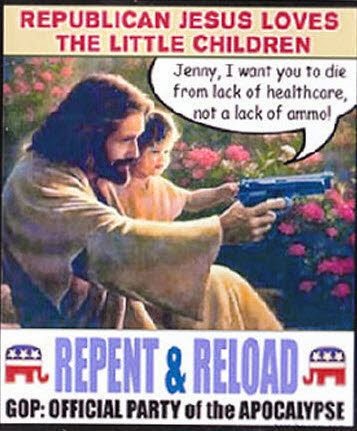 Returning to the events of last week involving the effort to use "religious freedom" to discriminate in commercial transactions between individuals, I impressed by the actions of the Governor of Arkansas Asa Hutchinson in not signing such a bill sent to him by the yahoo legislature -- even if those actions were as much dictated by Walmart than anything else.
(Note: I use the terminology "Walmart" rather than "Wal-Mart" because that's how the company now uses it on its website.)
As an aside but still noteworthy, Gov. Hutchinson's son Seth sounds interesting.

I was also impressed by the efforts of so many in Indiana -- including The Indianapolis Star newspaper editorial board.


The big issue coming up soon, though, is how the "Scalia 5" will rule in the utterly bogus King v. Burwell case that could rob health insurance from the 7.5 million people in 34 states who now have it thanks to the Affordable Care Act but who have to rely on the Federal exchanges because their Republican-led state governments would rather let them die than have insurance and give Obama a "victory" in this area. 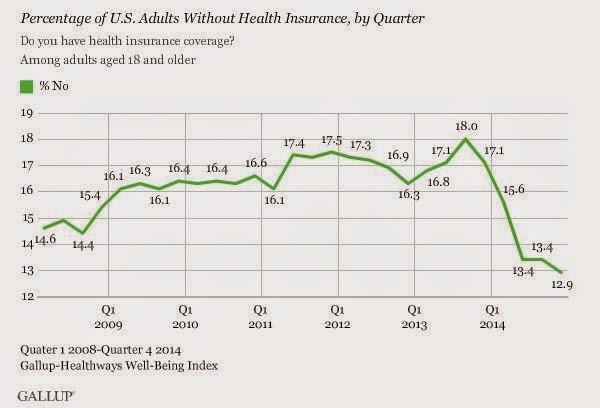 
The fact that one of the two major political parties in the United States of America in the 21st Century prides itself on having an enormous part of the citizenry not having basic health care is a testament to the moral sickness of our country's political discourse -- and which the profit-driven hybrid news and entertainment bubbles including cable and talk radio are creating and exacerbating the Manichean red-blue political split. 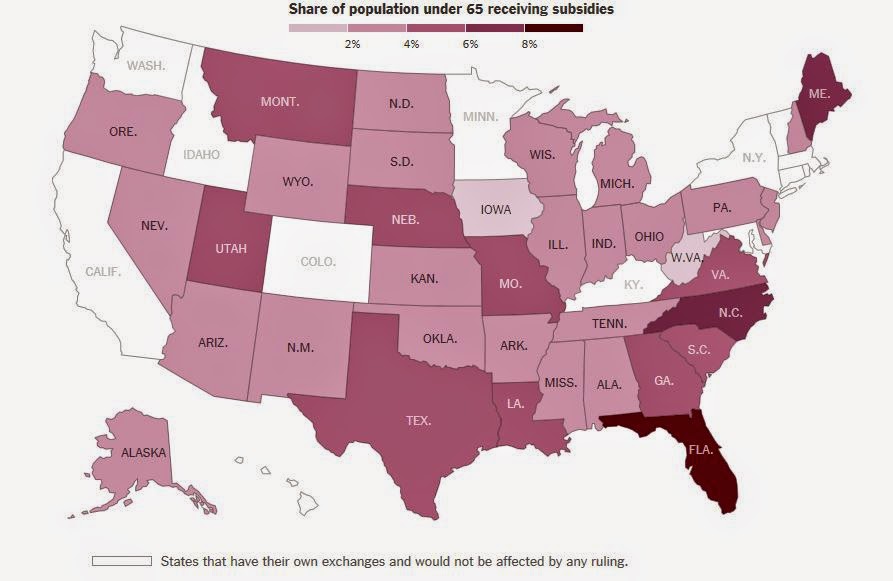 A map of states with Federal health exchanges for those under 65 as a percentage of the population.
The shocker for the GOP will be when it realizes that some of these people are actually white and not technically poor. That could actually cause the entire "calculus" of this issue to blow up on them, although knowing how dumb the country is and how gerrymandered is its political boundaries in the House, any awful outcome is possible.
*******


OK, that's all for now. My next planned update will be on late Monday / early Tuesday.
--Regulus
Posted by Regulus at 2:56 PM