Weather Update Whether Or Not It Does Snow; My Mostly Wrong Yahoo Spam Folder Dossier; & A Big, New Character for Tales of Wall-P & Me 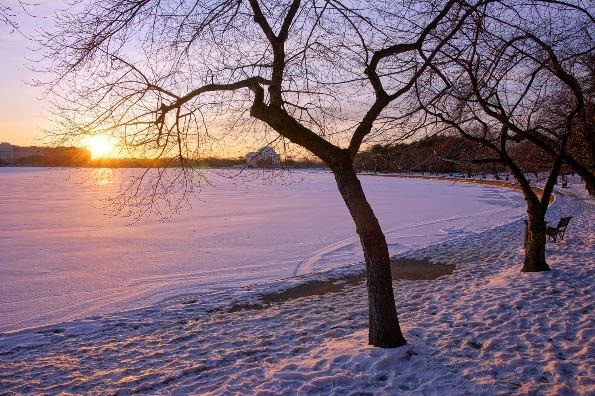 Sunrise over the frozen Tidal Basin, Washington, D.C., Feb. 28, 2015.
Kevin Ambrose of the CWG took this picture and it was posted in this entry about the forecasted date that the Tidal Basin Yoshino "Japanese" cherry blossoms will peak this year (rather late at April 11th - 14th).
*******


It's midnight as I start this entry and I'm tired that I'm loopy. It's not a drunk thing; quite the contrary, I had a good three-part workout, three-hour gym visit tonight. I opted to skip going to Larry's Lounge where Gary and Kristof went (since Goddard has already announced it is closed tomorrow). I so don't need to get drunk (again) and wake up at 9AM just to look at "snow busted" wet pavement and have to go to work.
Screw that. 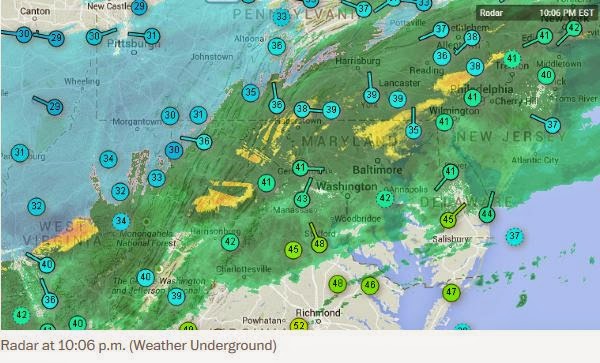 The composite radar mosaic for Maryland and adjacent areas with rain and snow differentiated by color and with selected temperature reports placed atop the same map as of 10:06PM March 4, 2015. This altered radar image was created by Weather Underground.
*******


As for a weather update, in brief, all the same logic and pretty much the same forecast applies from my previous entry. The night is a not-particularly-cold and showery one with temps. still around 41F at the 1AM hour and the cold air not quite infiltrating the immediate Metro D.C. area (and the rain/snow line way back by the Allegheny Front). 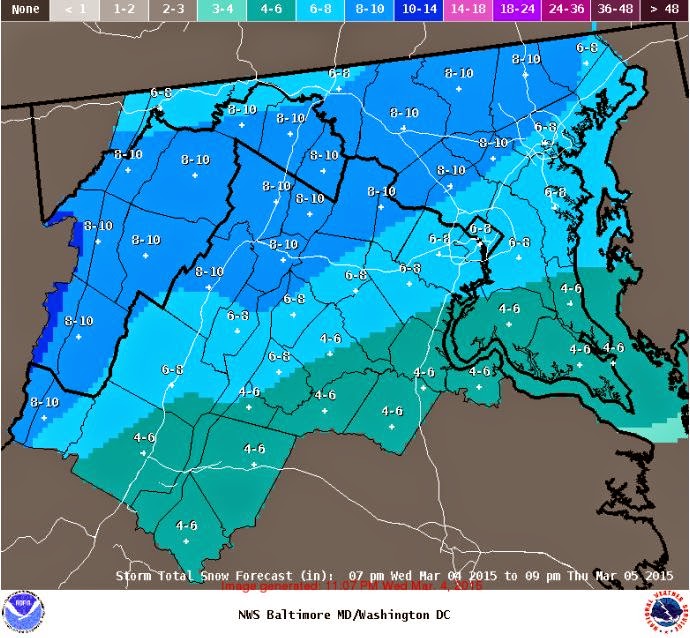 The "most likely" map from the Sterling (LWX) NWS website updated just before midnight. It still shows 6 to 8 inches for the Metro D.C. and Baltimore areas.
*******

I will mention two items of note:


First, there is the somewhat unusual occurrence right now in which the ENTIRE geographic region of the State of Maryland is under a winter storm warning. 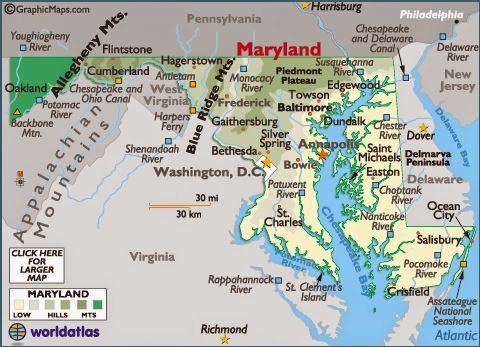 This warning stretches from the rural vapidity of Garrett County (where the mountains are not particularly visually impressive owing to the oddly elongated ridge configuration of the Alleghenies) to the Eastern Shore and including the most brackish tidal swamps of southernmost Somerset County and the beaches of Worchester County including Ocean City and Assateague barrier islands and, in between, both the still semi-urban pathological Baltimore City and the entire region called eponymously, "suburban Maryland," that encompasses the suburban sprawl of the Baltimore / Washington Corridor, and finally, south to the depressing albeit pretty stretches of St. Mary's County right to Point Lookout where the tidal Chesapeake meets the tidal Potomac in a vast expanse of dull drowned river valley-dom.
(It's a good thing my mom almost never reads this blog. She wouldn't like that description of her adopted home state.)
My point is, those are very different winter time climate "regimes," so this is noteworthy to have a single event affecting (or potentially affecting) all of them. 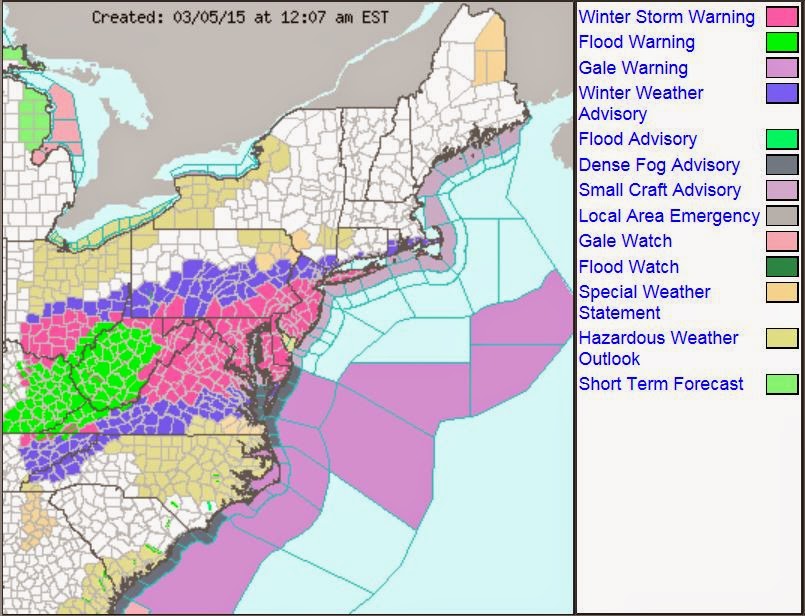 NWS weather advisories for the northeastern Lower 48, updated 12:07AM EST March 5, 2015.
The map is taken from this site that survived the reorganization / standardization of so many NWS Forecast Office sites. I just zoomed in 150% of normal.
*******


In the above map, note that all of "Small Wonder" Delaware is under a winter storm warning as is the southern two thirds of New Jersey including Monmouth, Ocean, Atlantic, and Cape May Counties right to the very beaches. The northern part of the state including Sussex, Hunterdon, and Warren Counties is not but just a winter weather advisory. 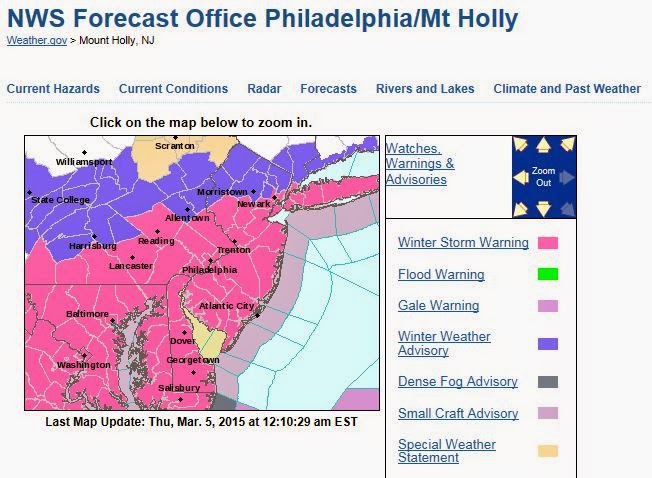 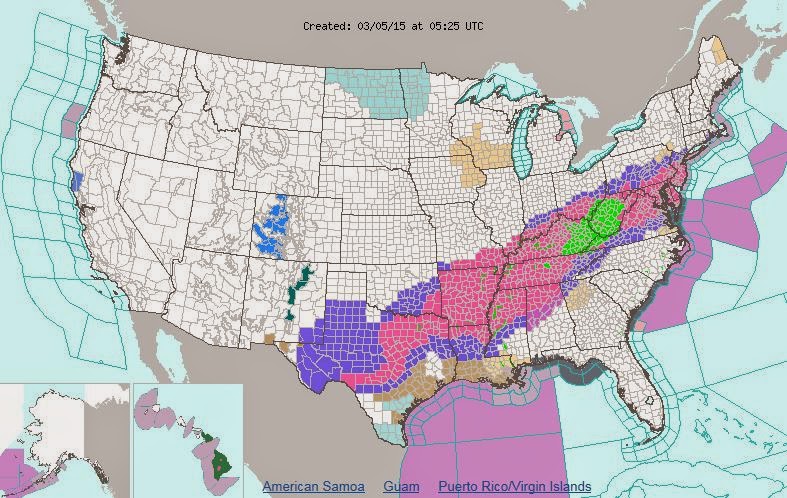 NWS map of all U.S. weather advisories updated 0525UTC (12:25AM EST) March 5, 2015.
This map shows that New England is being spared this event -- a merciful change for the snow-blitzed and bounded Boston area. Meanwhile, nearly all of West Virginia has a winter storm warning except a flood warning (due to rain and melting snow and from the mild weather of the past two days) is also in effect and trumps the former. It is represented by the bright green color.
*******


In terms of the impressive moisture feed for this very elongated frontal system with overrunning precipitation (focused in places by minor impulses riding along the boundary), here is the composite radar for the eastern half of the Lower 48 states ... 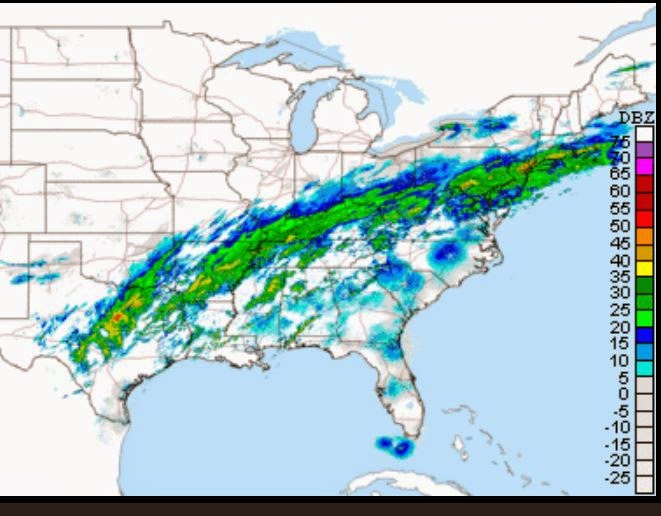 
The moisture feed in question actually has two sources: The Gulf of Mexico and the tropical Pacific. This is shown in the following image: 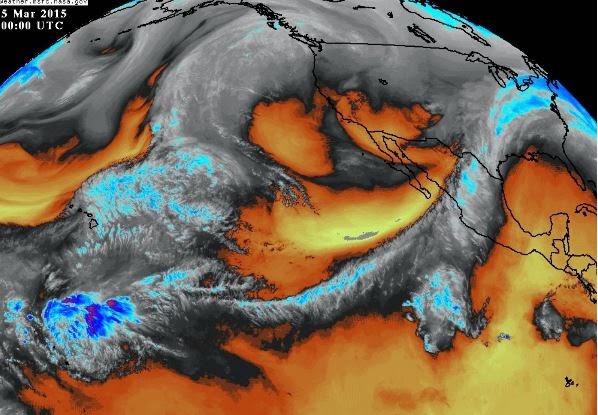 
Here is the most recent CWG entry (link embedded): After rain and sleet, significant snowfall on the way for Thursday. (Note that the blog entry title sometimes changes, though not the URL.)
Note that the comment section -- as I post this, now totaling nearly 2,070 just for that entry -- turned into a kind of mob scene, although a very D.C. bourgeois mob, not to mention a "virtual" (online) one with a keen weather interest and desire for a snowstorm that will close the Federal Government on Thursday (most school districts have already announced closures or delays). Nevertheless, you pooh-pooh the snow chances at your own risk.
If the snow really materializes tomorrow, I'll post an update in the morning -- and then, assuming the office is closed -- take advantage of the snow by at least walking around a little bit, esp. since there is every chance this will be the final snow of the season here in D.C. 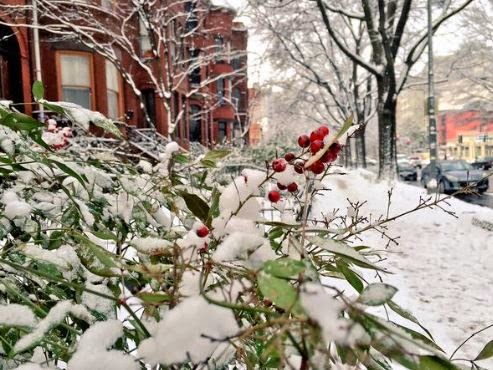 (Inedible) red berries growing on a bush along snowy Rhode Island Ave. near North Capitol Street NW on the morning of Feb. 26, 2015. This image was taken by someone identified as Joe Flood and posted in this CWG entry.
*******


The snow event is actually happening and is well underway with the radar showing some banding indicative of heavy snowfall rates. SPC has the D.C. area included in a heavy snowfall possibility for the next several hours for rates of 1" or greater.
Furthermore, Sterling updated the most likely snowfall amounts for the immediate D.C. area to 8 to 10 inches: 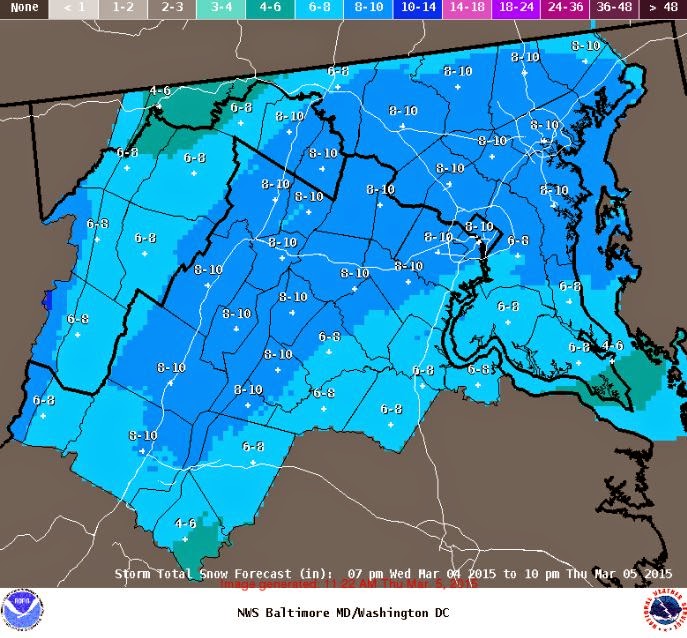 LWX CWA most likely snowfall amounts updated at 11:22AM this morning running through 10PM tonight.
*******


Here is the relevant CWG entry (link embedded): Winter storm warning: Snow, heavy at times, throughout the day (LIVE UPDATES).
Again, the blog title sometimes changes but not the URL. There are lots of pictures taken from people around the region. 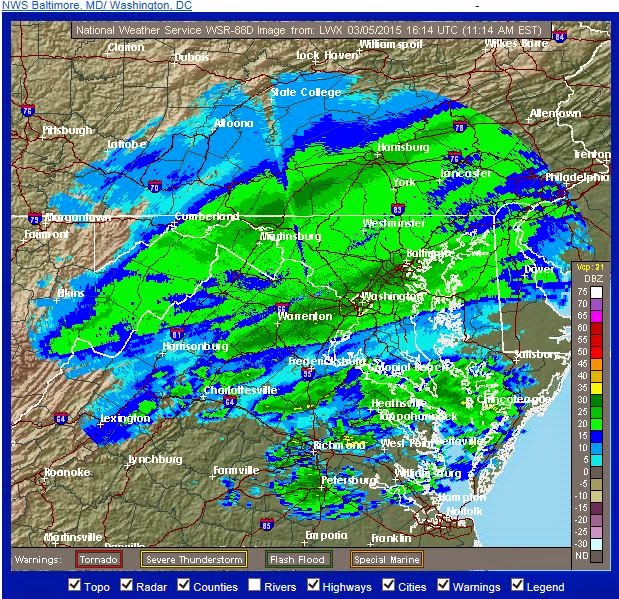 Sterling (LWX) NWS radar in enhanced base reflectivity mode 11:14AM EST March 5, 2015.
I'm actually going to go outside into the snow rather than sitting at this computer all day blogging. (Yes, the Federal Gov't closed.)
End of Update.

"Why America is Great, Part 1"


A screenshot of my Yahoo spam folder a short while ago ...

To be clear, I get 30+ spam emails per day (itself a source of American greatness) that I regularly clear out. However, I do want to note that according to whatever algorithms are being used in cahoots between Yahoo and its spamming advertisers to "narrowcast" ads to me, the assumptions are that I am:
1. Building a new roof on a non-existent house of mine.
2. Really have an interest in becoming a nurse (2 emails) followed by the other shown professions.
3. Need a new digital TV (actually, I can't use the one I already have 'cuz of the digital antenna).
4. Need new discount coupons for my non-existent car.
5. An alcoholic (Hmmm ...)
6. Want a new SUV, presumably to replace my non-existent regular car.
7. Have no health insurance and need to enroll in an ObamaCare plan (spelled with the GOP spelling).
8. Have shitty credit and presumably no credit card. (OK, that much is true.)
Other ads typically found in my spam box include those for toenail fungus and assorted Big Pharma medicines, plus those offering to "grow" manhood by "at least 2 inches" and the occasional one for the Genie Zip bra with "comfortable compression targeting your trouble areas."
*******


The Wall-P and Me and Hysterical Gee Make Three Chronicles": Introducing Big Y'eyemah 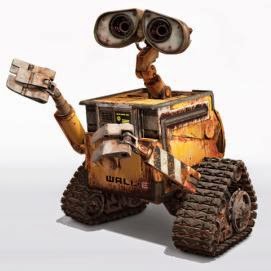 I really need to post more off-beat short stories from my proposed "The Wall-P and Me and Hysterical Gee Make Three Chronicles" series. The things I think about. I really would need a separate blog, though, and one that didn't even try to maintain the nicety of so many pictures to break up the text.
I have all sorts of characters including a new one: Y'eyemah the Housewife Hippo, not to be confused with Nag'Em the Cheesecake-Eating House Hippo. 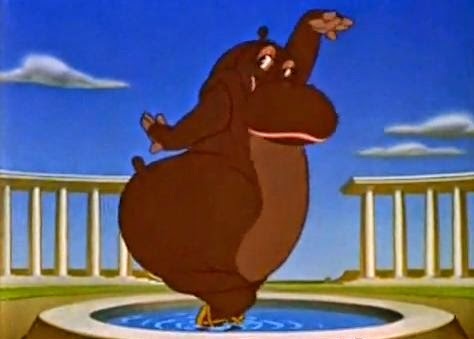 Y'eyemah, affectionately known as Big Mah-Mah, is my wife through some horrible turn of fate since I'm homosexual (and probably involving my debtors prison stint) in that libertarian dystopia circa 2028 in which Wall-P (and his all-policing wife, Cruella de-Staff) and me have all kinds of delightfully dreadful and disastrous interactions and situations. 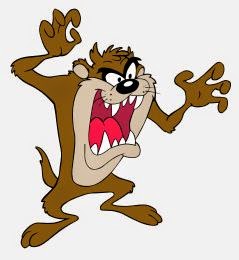 All the mayhem is leavened by the presence of Hysterical One (Gee), who when not shrieking bad karaoke, frequently crashes into things Tasmanian devil-style, and there's lots of falling plaster and even masonry in this series, a "special" effect that plays an important plot device). 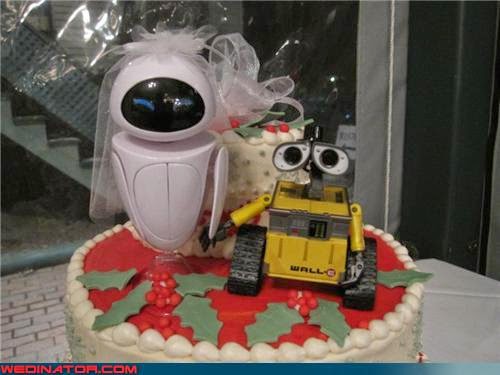 Wall-P and his wife, Cruella de-Staff on the day they entered into their legally-binding nuptial contract.
******


We get the fun rolling, no pun intended, in the pilot episode by having Big Y'eyemah, as her name suggests, show up weighing, like, 600 pounds (and steadily rising, one triple Big Mac and Super-Duper-Sized-McFries at a time). Actually, her weight is likely more because, we find out in the pilot, that she was last weighed at one of those truck stop weigh stations and the scale, though certified, was underreporting. 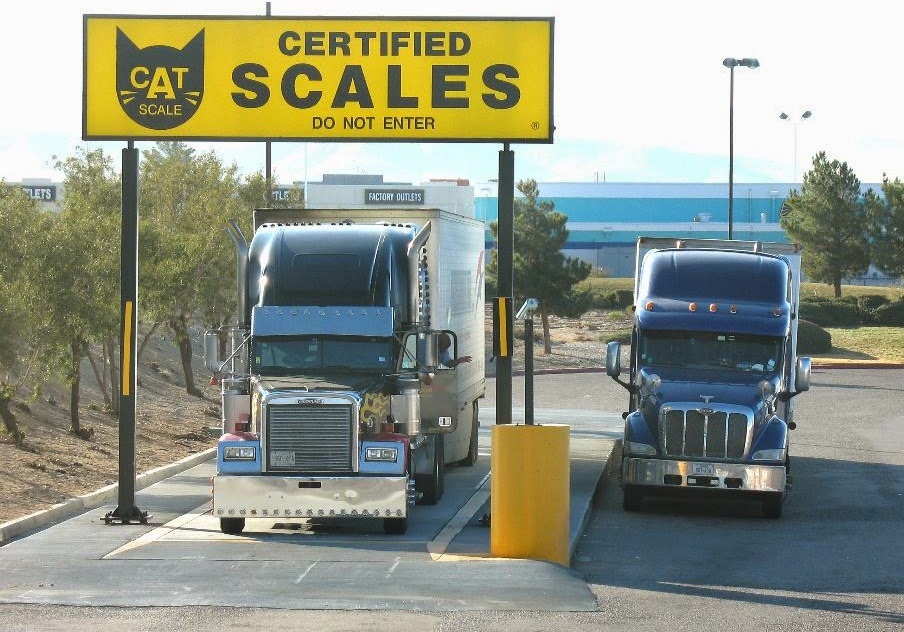 Oh, and there's little Annabel-Mae, our ghastly little daughter that is something out of a Divine movie or a Honey Boo-Boo episode.


See, I told ya I was feeling tired loopy. I was thinking of plot lines at the gym and laughing.
OK, that's all for now. As a closing point, IF this system busts in any big way, and the radar trends don't look that impressive at 245AM, I'm probably not going to post much about it other than to note that it happened.
--Regulus
Posted by Regulus at 2:47 AM