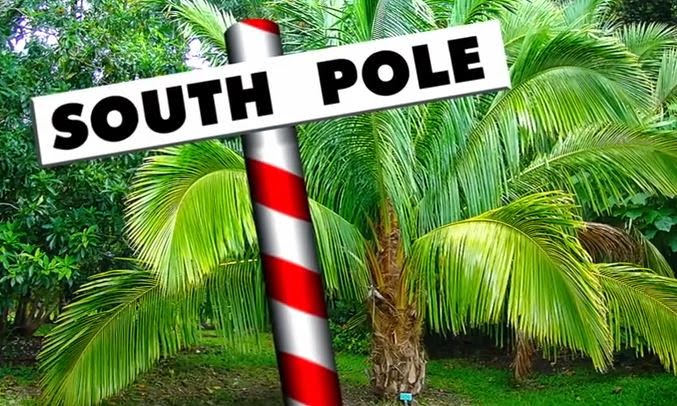 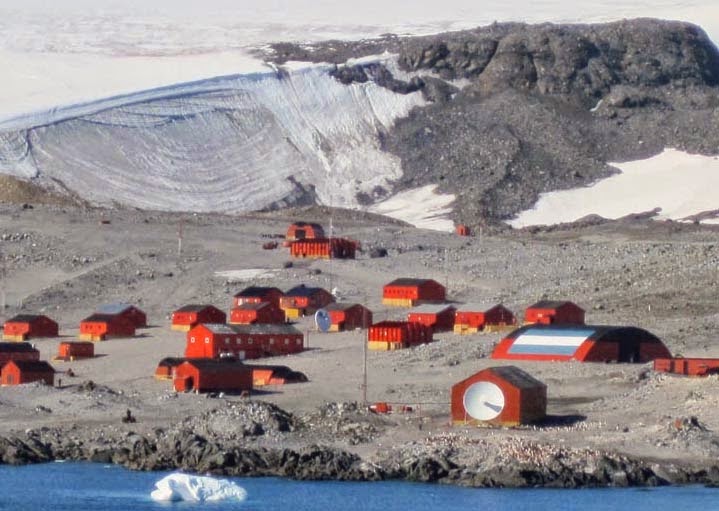 Argentina's Esperanza Base on the northern tip of the Antarctic Peninsula. It is located near 63°S latitude. Image from Wikipedia.
Possible New Continental Heat Record for Antarctica
By: Christopher C. Burt, 5:27 AM GMT on March 26, 2015
Source here.


On March 24th Base Esperanza (under Argentinean administration) located near the northern tip of the Antarctic Peninsula reported a temperature of 17.5°C (63.5°F). Although this is the warmest temperature ever measured since weather stations became established on the southern continent, it is complicated by what the very definition of 'Antarctica' is. Here’s a brief review.
OGIMET 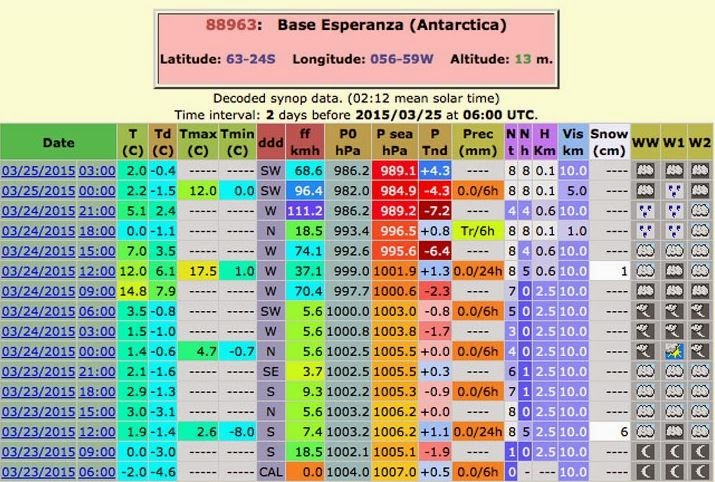 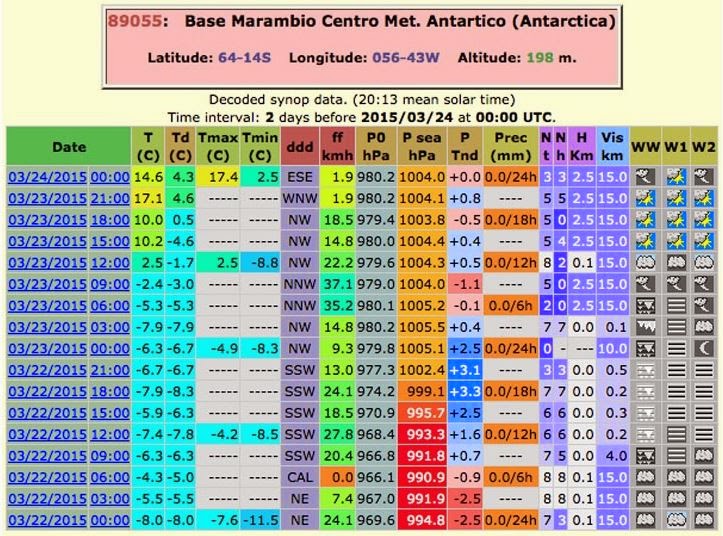 METAR tables for Base Esperanza (top) and Base Marambio (bottom) for the days of March 23-24. The 17.5°C (63.5°F) at Esperanza on March 24th and 17.4°C (63.3°F) at Marambio on March 23rd exceed any temperatures yet measured on or very close to the Antarctic landmass. Tables from OGIMET.
The 17.5°C (63.5°F) temperature at Esperanza occurred just one day following a reading of 17.4°C (63.3°F) measured at Base Marambio (also under Argentinean administration) on March 23rd. Marambio is located about 60 miles (100 km) southeast of Esperanza. Both figures surpass any temperature yet measured at either site. Esperanza's previous record high of 17.1°C (62.7°F) was recorded on April 24, 1961 according to Argentina's met service SMN (Servicio Meteorológico Nacional) and the previous record for Base Marambio was 16.5°C (61.7°F) on December 7, 1992.
More importantly, the temperature at Esperanza exceeds any figure yet observed on the Antarctic landmass or Peninsula. According to the WMO, the all-time warmest temperature yet observed in Antarctica was 15.0°C (59.0°F) at Vanda Station on January 5, 1974. Vanda Station is located near 77°S latitude but was occupied for only brief periods, mostly during the Austral summers, between 1967-1995. It now has an automated weather station and is occasionally visited by researchers. Base Esperanza’s weather records began in 1945 according to data published in The World Survey of Climatology: Vol. 14, The Polar Regions. On page p. 353 there is a table of climate data for Esperanza based upon the POR of 1945-1960. I am not sure if the POR has been continuous since 1960 up to the present. Base Marambio was founded in 1969 and is a relatively large facility with at least 55 year-round personnel, a total that swells to 200 during the summer. 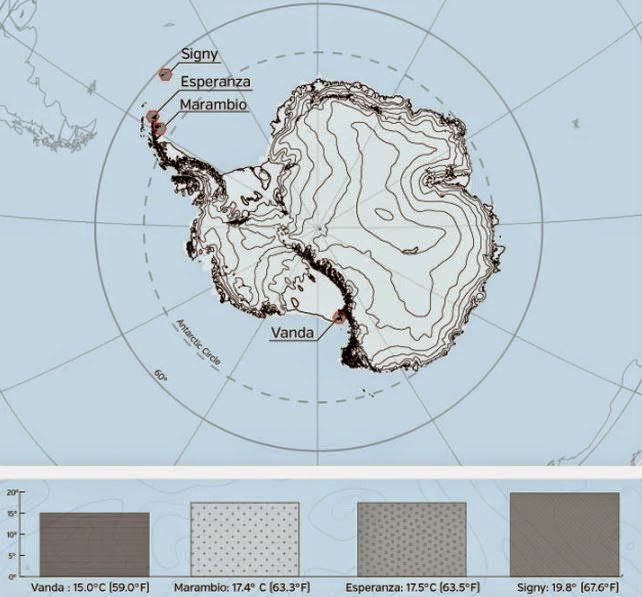 Map of Antarctica showing the locations of the various sites referred to in this blog. A table of what the highest observed temperature on record for each of the four sites discussed is below the map.
Despite the fact that the temperature record from Vanda appears on the list of world weather extremes maintained by the WMO, the WMO has not yet investigated all-time weather records for Antarctica, so the Vanda reading and the recent observations at Esperanza and Marambio remain 'unofficial' (so far as continental world-record-temperature extremes are concerned) although the recent temperatures at Esperanza and Marambio are 'official', at least preliminarily, according to SMN.
That being said, and given the recent extraordinary temperatures observed at Esperanza and Marambio, there is a chance that the WMO may wish to launch such (an investigation of Antarctica’s warmest measured temperature).
Should this happen the first issue will be the definition of the region of 'Antarctica' for the purpose of weather records relating to the continent. There could be perhaps three (or even four) possible scenarios.
[There follows discussion of the scenarios about what is geographically and geo-physically-and-meteorologically meant by "Antarctica" the continent. The relevant part is that if Amsterdam Island is considered part of Antarctica, then the all-time continental high would be 26.4°C (79.4°F) set on 30 January 2005.]
More About the Unusual Warmth at Bases Esperanza and Marambio
One surprising aspect of the temperatures measured recently at Esperanza and Marambio are that they occurred in autumn, nearly three months past the usual warmest time of the year in the Antarctic Peninsula. According to NOAA December is typically the warmest month in Esperanza, with an average high temperature of 37.8°F (3.2°C). The March average high temperature is 31.3°F (-0.4°C), so temperatures on Tuesday, March 25th, were more than 30°F (17°C) above average. However, looking at the statistics in the World Survey of Climatology (referred to earlier) it is interesting to note that the warmest temperature observed at Esperanza during the period of 1945-1960 was a 14.6°C reading during an October and the 2nd warmest was 14.2°C during an April (also tied in January). So we can see that record high temperatures for Esperanza are not confined to just the summer months. 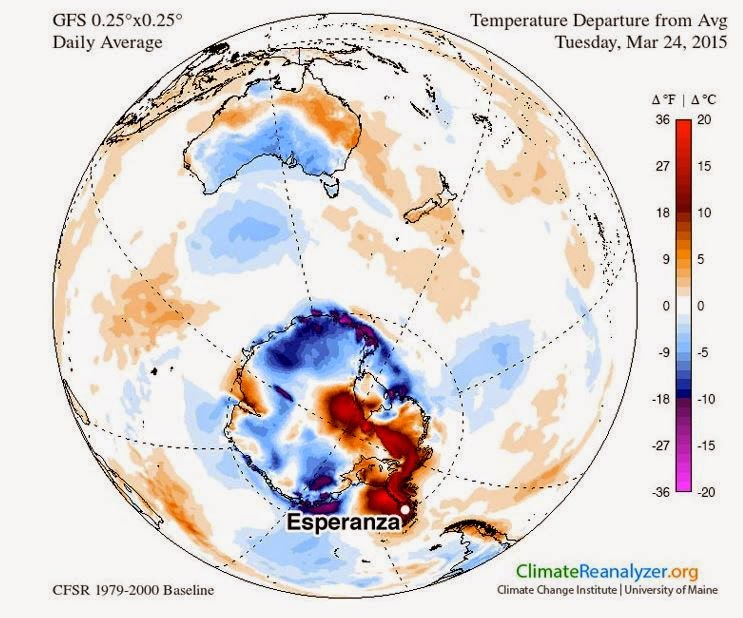 Departure of temperature from average for Tuesday, March, 24, 2015, over Antarctica. Temperatures were more than 30°F (17°C) above average. Image credit: University of Main Climate Reanalyzer.
A strong high pressure ridge and a Foehn wind led to the record temperatures as Jeff Masters explains here:
This week's record temperatures were made possible by an unusually extreme jet stream contortion that brought a strong ridge of high pressure over the Antarctic Peninsula, allowing warm air from South America to push southwards over Antarctica. At the surface, west to east blowing winds over the Antarctic Peninsula rose up over the 1,000-foot high mountains just to the west of Esperanza Base, then descended and warmed via adiabatic compression into a warm foehn wind that reached 44 mph (71 km/hr) at 09 UTC on March 24th, near when the maximum temperature was recorded. A similar event also affected Marambio on the 23rd. 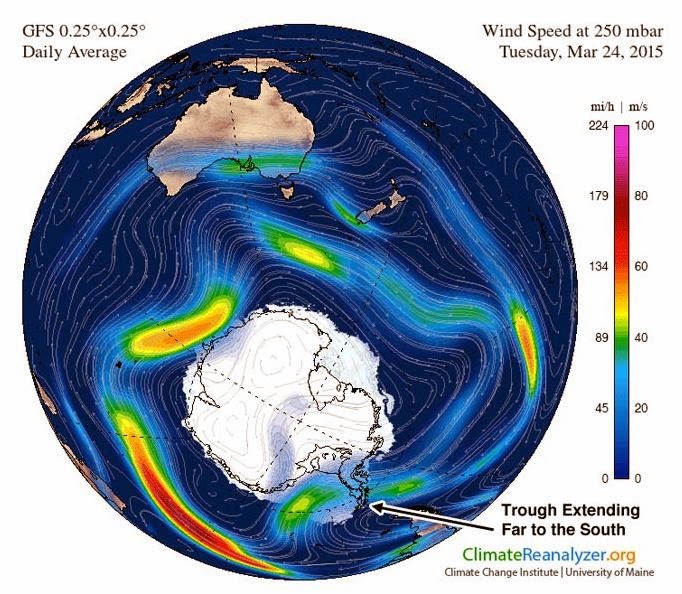 Jet stream image for Tuesday, March, 24, 2015, over Antarctica. An unusually extreme contortion of the jet stream allowed a ridge of high pressure to extend far to the south over the Antarctic Peninsula, bringing record-warm air from South America. Image credit: University of Main Climate Reanalyzer.
KUDOS: Thanks to Maximiliano Herrera for bringing this to our attention and researching the temperature records for Antarctica.
Christopher C. Burt
Weather Historian 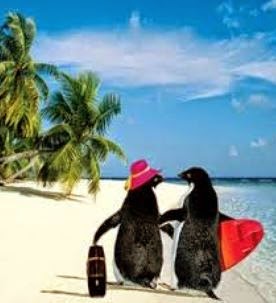 The CWG had an entry about it including a correction that I helped get -- see my Arcturus24 comment.


These events included a freakish rainstorm in the normally virtually rainless Atacama Desert that has killed at least 17 people and caused widespread destruction. That entry is here (link embedded):
63.5°F in Antarctica: Possible Continental Record; 14 Years of Rain in 1 Day in Chile by Jeff Masters and Bob Henson. 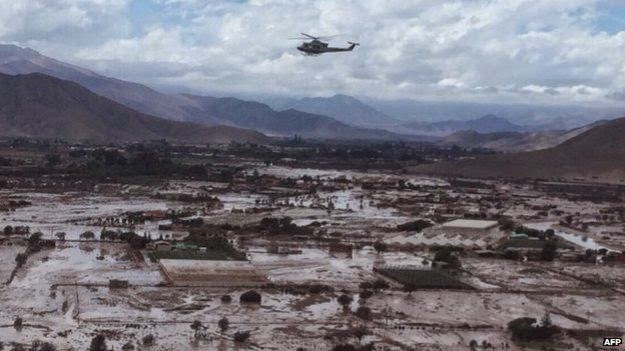 An aerial view of the widespread destruction caused by the flash flooding in the Atacama Desert of northern Chile as seen in the days following the March 25th rains. This picture was released by the Chilean Air Force.
*******


The Chilean rains specifically refer to the 24.4 mm (nearly 1 inch) recorded at Antofagasta, Chile in the Atacama Desert, the world's ultimate rain shadow desert. Specifically, 0.96" fell in a single day on March 25, 2015 -- corresponding to 14 years' worth of rain for that virtually rainless spot where the annual average is put variously as 1.7 mm or 3.8 mm (i.e., between 0.07 and 0.15 inch).
This is reportedly the heaviest rain in that region in 80 years.
A video from Copiapó, Chile of the Copiapó River on March 25, 2015. The normally dry channel in that rainless land has been transformed into a raging, roaring, deadly torrent of liquefied mud.
Not surprisingly, there have been fatalities and widespread destruction across the region. The current death toll is put at 17 with another 20 missing. In addition, at least 4500 people are homeless and in shelters.
Below are some additional pictures from the cities of Copiapó and Chañaral, two hard hit cities in the Atacama Desert (and not to be confused with the larger provinces of same names). Copiapó is 250 to 300 miles south of Antofagasta by air (much more by land route). Chañaral is maybe 50 miles north of Copiapó and on the Pacific Ocean. 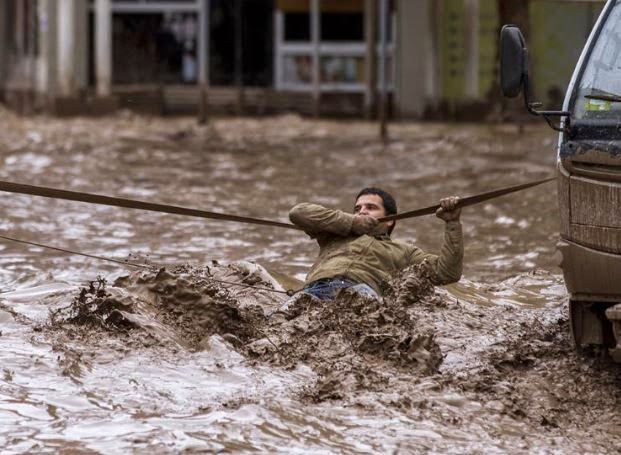 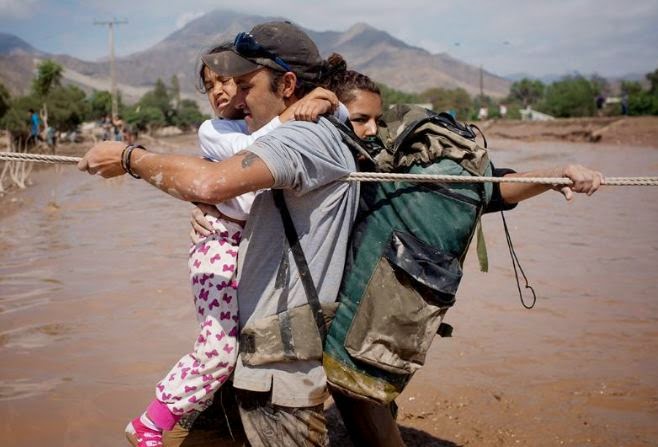 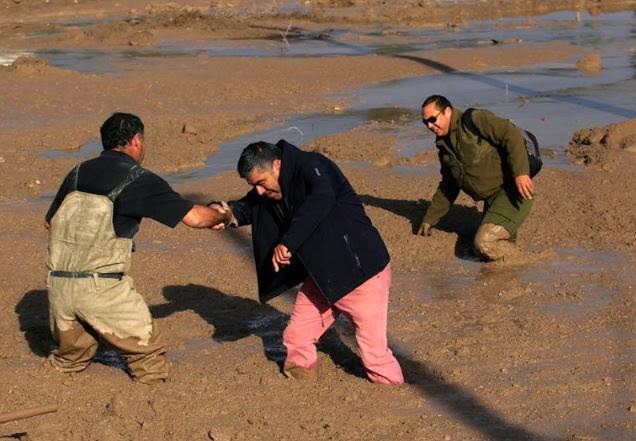 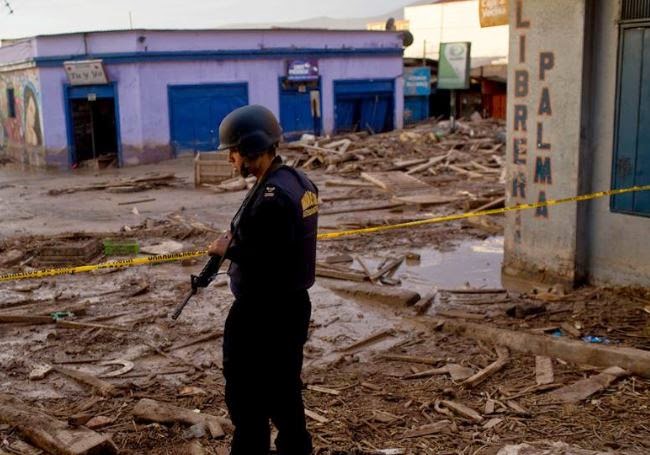 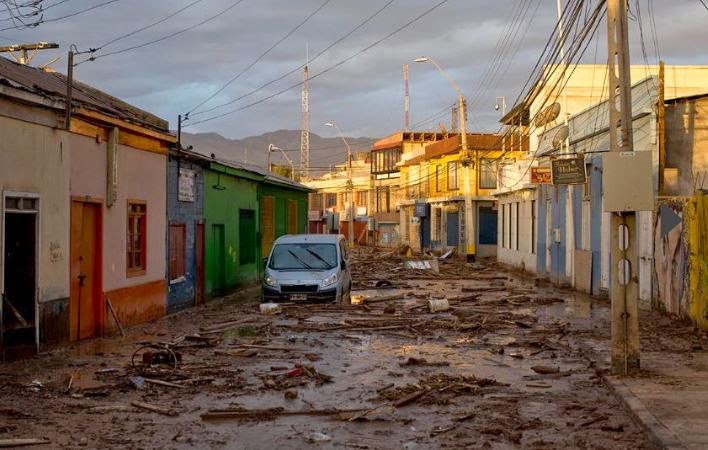 More flood damage in Chañaral, Chile, March 26, 2015.
I suspect the weather and sky conditions even in this picture -- really humid with lots of clouds -- was quite unusual.
******* 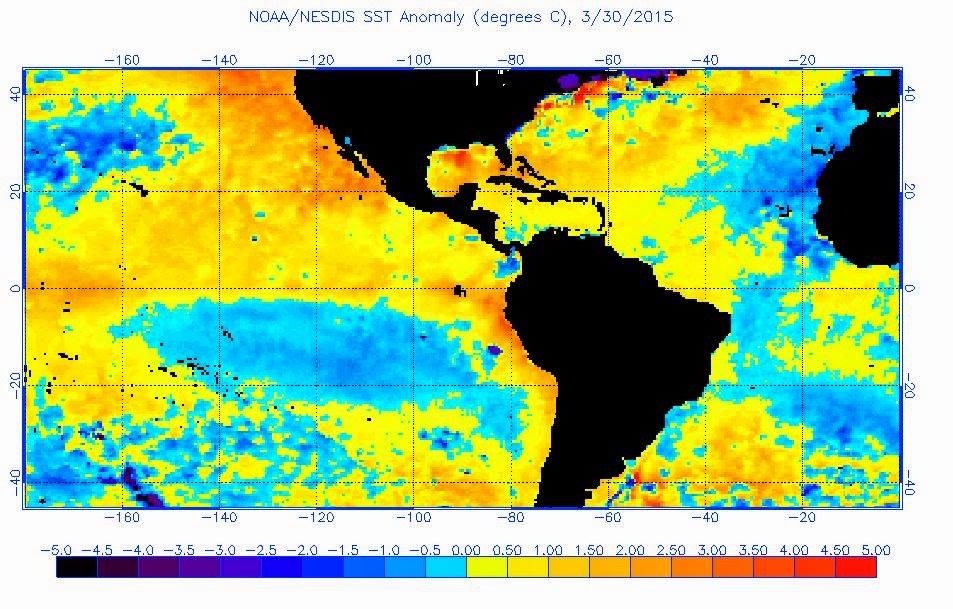 Current sea surface temperature (SST) anomalies in Celsius for the Western Hemisphere, March 30, 2015. Source: NOAA-NESDIS.
Elevated SSTs in the eastern tropical Pacific associated with the current warm ENSO contributed to this highly unusual event as did an unusual upper level synoptic pattern -- one that ties into the weather pattern that brought record warmth to the Antarctic Peninsula (see the Masters / Henson entry for explanation).
--Regulus
Posted by Regulus at 12:45 AM