Preview of Possible Late Season D.C. Snowstorm, Those MOS Numbers And All -OR- Marching Forth Toward Another Bust? 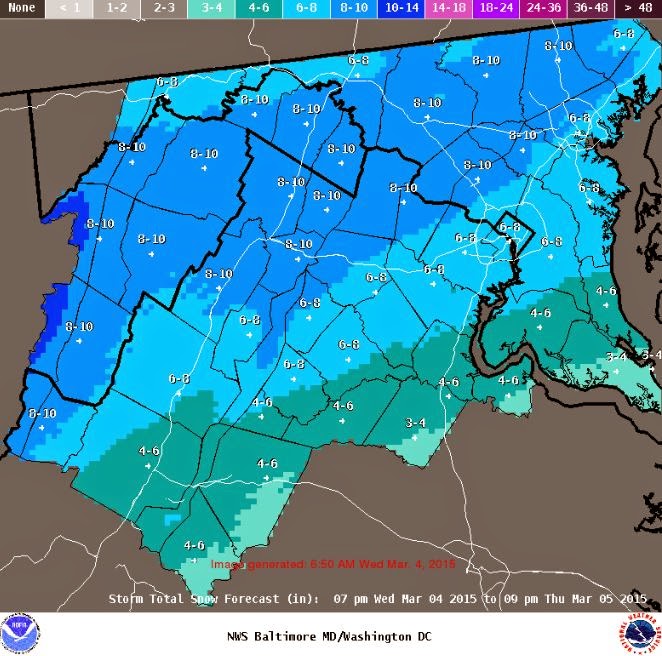 
I had intended to post an update last night, specifically, one about our impending would-be late and almost last* of the season snow storm for late tonight into tomorrow. However, I did not go to the gym after work but instead I went solo to Post Pub on L Street for a drink, a hot tea, and a bit of dinner, and thereafter, I went to Larry's Lounge where I met Gary.
*A big pattern change is progged to take place next week with more spring-like weather finally arriving.
Recall that this is a somewhat anomalous event in which rain turns to accumulating snow in the immediate D.C. area. It involves a significant overrunning along a modified Arctic boundary sagging south and a lot of Gulf of Mexico and even Pacific Ocean moisture but with only the most minor of weather impulses riding along the front. This means no big coastal storm -- although that is probably a good thing because it means no big coastal storm to miss the D.C. area via the usual bad relative positioning with dry slots, lack of favorable dynamics, etc. 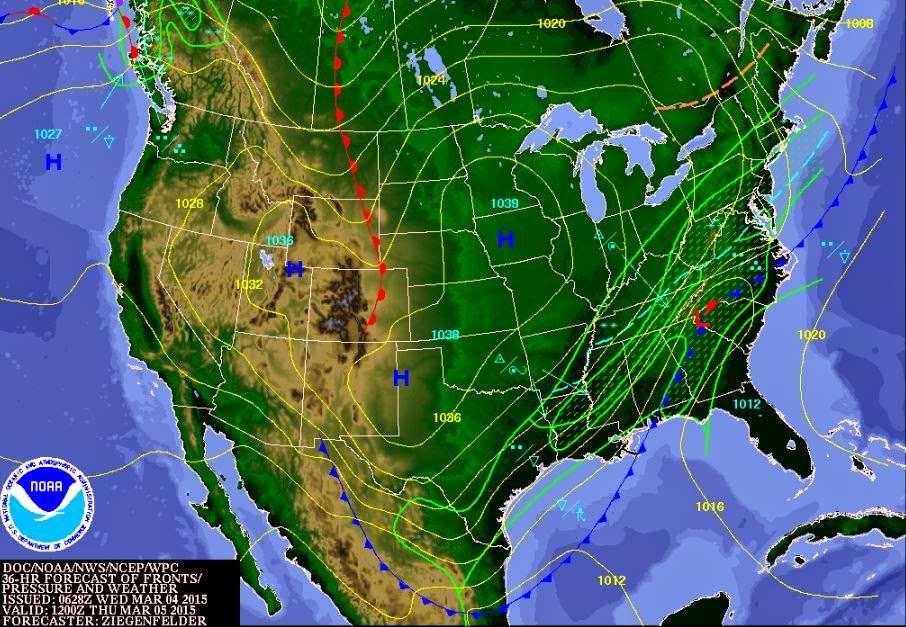 The NWS 36-hour forecasted surface map valid at 12Z (7AM EST) March 5, 2015.
This is kind of a shitty resolution forecast map. This always happens with these maps. If you click on it, you should get a larger and less grainy version.
The one for today, while 24 hours "prior" the above one, is nevertheless larger and clearer, even if a bit more stylized and cartoonish (and has no specific hour at which it is valid): 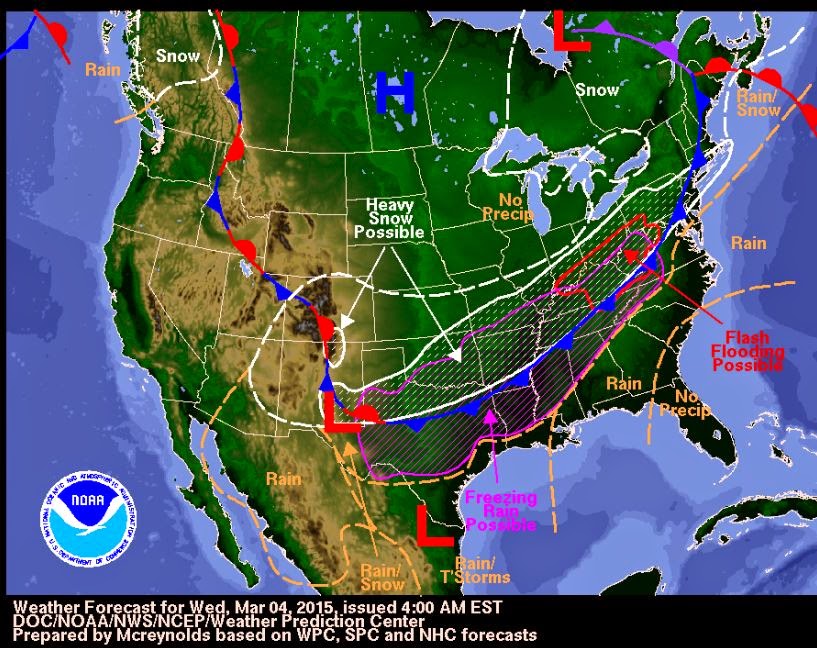 
Anyway, everything was fine there, and Gary and I watched the animated runs of the 0Z NAM and GFS roll in ... Everything was great looking at the 850mb temps and 6-hour precip. amounts ... But then we checked the associated MOS guidance and it sucked with the NAM having only a "2" at KDCA and KBWI for snow (i.e., 2 to 4 inches of snow).
The GFS did a bit better at "6" (6 to 8 inches of snow) -- but, even still, all the other numbers were "0" and, more to the point, this will be a wet snow that has transitioned from rain, so what falls will not immediately stick, so these numbers can probably be reduced by a third to half in terms of actual ground accumulation. 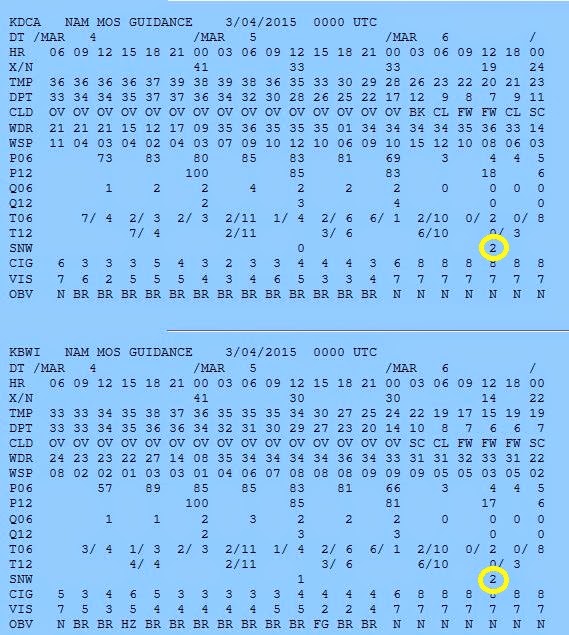 
We were shocked and crestfallen (yes, shocked and crestfallen), especially after looking at all the "fantasy" graphical output with the 0C 850mb line cruising south toward Richmond and the 6-hour totals dark greens bordering into dark blues and overall QPF totals 1 to 1.25 inches.
I was quite in a bad mood even as this semi-regular friendly guy (whose name I forget) kept trying to talk to us about climate models and whether to trust them and otherwise saying nice but at-that-moment annoying things.
Grrr...


And, yes, I get the fact this is inherently a weird thing to want, especially consider the kind of suffering the Boston area has enduring because of snowfall that basically didn't stop for a month.
So I came home and got involved in some commentary in this CWG entry about whether or not it would snow. (I'm Acturus24.) I called bullshit (well, I said "BS") and said this has a "Snowquester" bust written all over it. Others gushed with enthusiasm. Taking a contrary stance is dicey in any online forum for a variety of reasons, not the least of which it is the stupidest place possible to discuss anything.
Anyway, all of that left me drained and I went to bed around 1:15AM with no update. 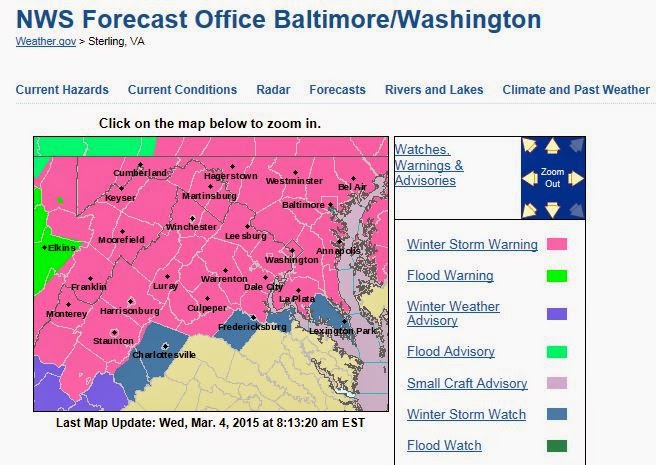 
As of this morning at 8AM, the entire extended Baltimore / Washington combined metro region is under a winter storm warning (see map above) with a forecasted "most likely" amount of 6 to 8 inches in both the District of Columbia and Baltimore City and adjoining immediate suburbs, 8 to 10 inches for points to the north, and 4 to 6 inches even in southern Maryland (see lead image to entry).
However, the MOS numbers for the 6Z GFS run is still shitty for KDCA and the various Maryland stations ("1" and "2" at best).
I'm not really sure what is going on other than the MOS ("Model Output Statistics") numbers are somehow using March climatology and thus assume a warmer boundary layer and more rain / mixed precipitation. Furthermore, the 4:01AM LWX area forecast discussion really isn't must help -- it barely acknowledges there is even a winter weather event other than to upgrade the winter storm watch to a warning for all but far southern Maryland and area around Fredericksburg.
My point is that it is dangerous to try to out-predict the MOS guidance when it is showing something like this no matter what you want to happen, especially this time of year as the solar energy input to the atmosphere is getting steadily stronger climbing into summer. Simply put, this is science, not "Fox & Friends" ahead of a presidential election that Karl Rove and the Scalia 5 can't readily steal. 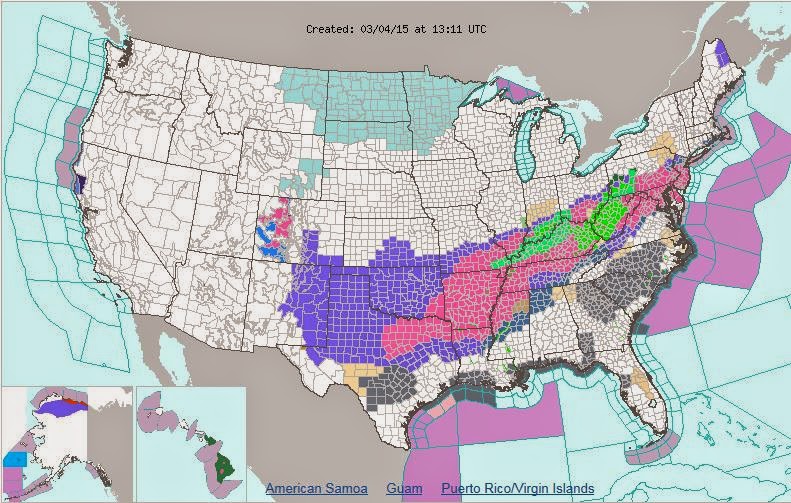 NWS weather advisories for the entire United States as of 1311UTC (8:11AM EST) March 4, 2015.
Remember that in the western U.S., weather advisories are not in general given by county / political subdivision but by similar geophysical / climate zone.
******* 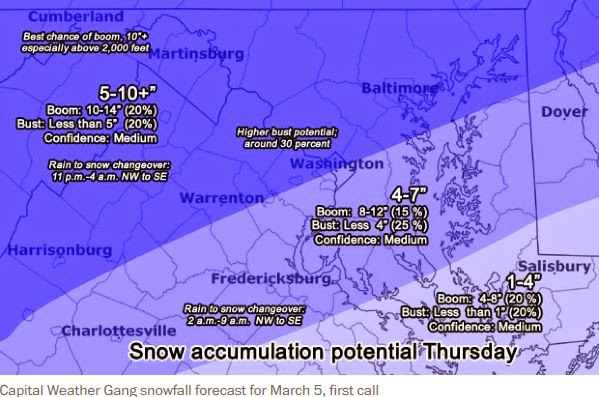 This snowfall map including the obligatory "BOOM" and "BUST" scenarios is taken from that entry. Note the "BUST" category is a bit higher than usual.
*******


Today should be a regular work day for me. Tonight, I intend to go to the gym. Thereafter, I'm not sure as it will depend on the weather -- i.e., go back to Larry's and meet Gary or just post an update and go to bed. If tomorrow is as snowy as forecasted, there would be closures including of the Federal Gov't. Anyway, I'm getting ahead of myself here. Let me get this Wednesday started.
--Regulus
Posted by Regulus at 9:07 AM