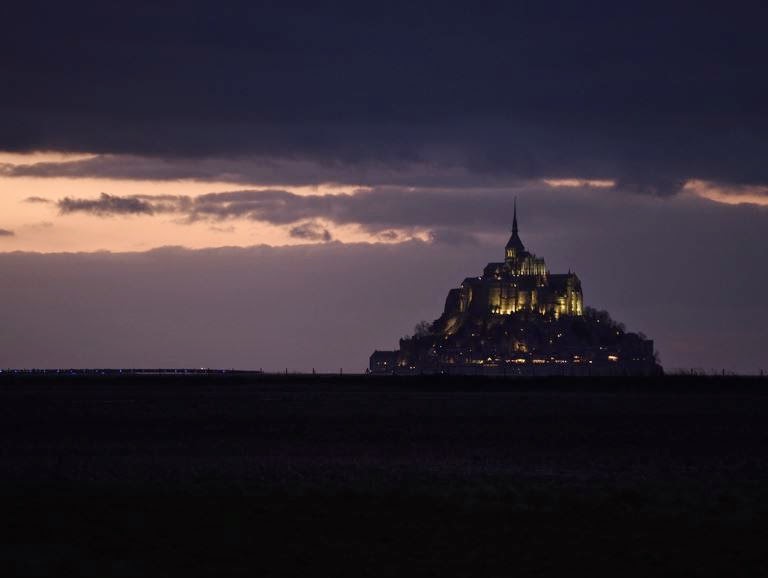 The ancient abbey of Mont Saint-Michel along the coast of northern France at sunset on March 21, 2015.
This was taken during a "supertide" created along the French coastline by the "super" New Moon right on (or slightly after) the Northern Hemisphere spring equinox. The once-every-18-year tide turns the rocky promontory into an island. Additional information here and photos here.

Oh, and there was a total solar eclipse associated with this new / "super" / spring equinox Moon in that part of the world, although the lunar umbral shadow (i.e., the path of totality) did not touch mainland Europe.
*******


OK, I'm finally getting around to updating this blog. Once again, it isn't the best week for me to post entries. I'm still suffering some after-effects of the Sunday night / Monday morning episode. That's an episode that will never happen again.
The odd side effect has been to keep me from being able to get mildly irritated, much less wildly agitated, about anything. This includes EVEN listening to the news or reading political commentary about whatever monstrosities the GOP is doing or plans to do and why it will probably succeed. (Indeed, I fully expect corporate fascism and dystopia in America in the next 10 to 20 years while the entire legal and economic fabric set up during the 20th Century is obliterated in a media-fueled carnival ride and general political polarization and widespread general idiocy and/or cluelessness of the electorate. Expect it.) Anyway, my point is, I'm feeling oddly and uncharacteristically serene. 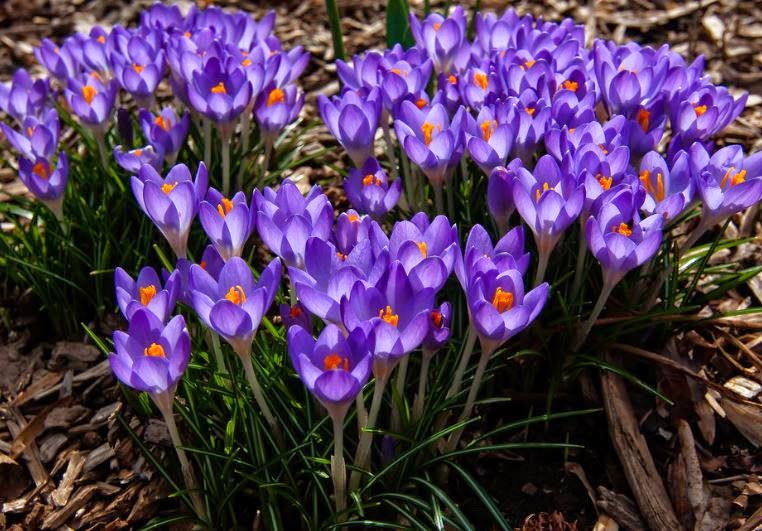 
I made it to the gym on Monday night and had a complete workout (except for a reduction in the treadmill incline). I didn't go last night or tonight -- not going tonight was probably a mistake -- but I fully intend to go tomorrow night. Last night, I went with Andrea to Harry's Pub on E Street, then to No. 9, and finally to Larry's Lounge, where I met Gary and Jamie. Tonight, I went to Tsunami for some dinner and, briefly, to No. 9 before making a beeline home by 915PM. 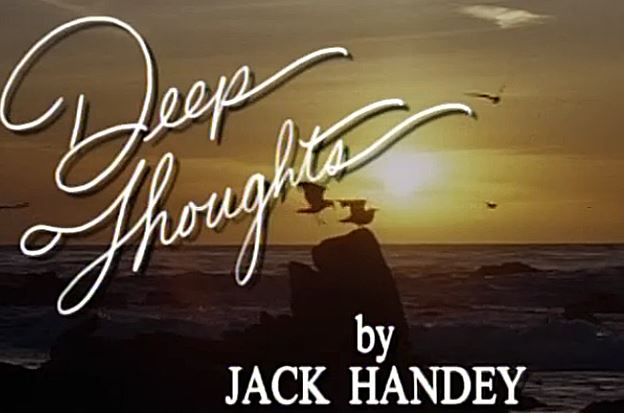 I've been on the phone with my dad while posting this entry. I haven't talked to my mom in a few weeks. The best quote of the conversation is as follows (and I'm paraphrasing since I didn't expect it and have to recreate it):

"I don't want her comin' in the room hittin' me when I'm layin' in bed. I might not be able to get up and defend myself without twisting my ankle. And I can't hit her back. We'd both end up in jail. That would be terrible. Who would feed the cats?"
Perhaps it's the after-effects of Sunday night / Monday morning, but I've decided to just embrace the insanity. Oh, and to be clear, my dad is 74 and Shannon, about 42, is not living with him because she's still banned from the Flagler-by-the-Sea trailer park. That banning edict is far more effective than anything the criminal justice system down there has done. However, they meet up regularly including going to sundry dive bars in and around Flagler Beach, where it's never not karaoke night.
OK, that's all for now. I'm going to try to post another entry tonight, though it is rapidly getting late. 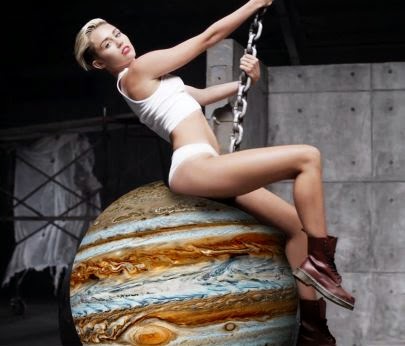 In particular, I like to post an entry on the findings by two astronomers, one from UC Santa Cruz and another from Caltech, when they ran simulations of implications of the Jupiter "Grand Tack" hypothesis. The results of their study is nothing less than what should be called the "wrecking ball Jupiter" hypothesis, and its theorized role in obliterating early planets in our Solar System and "clearing the way" for the formation of Earth (and its giant Moon). 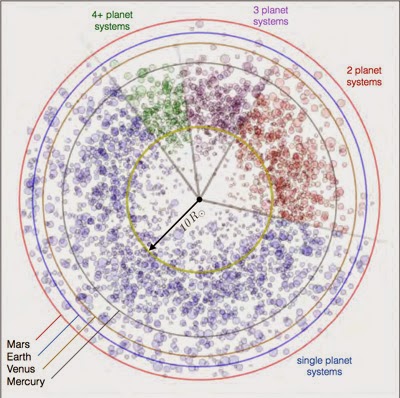 Diagram of orbital distribution of extrasolar planets smaller than Jupiter so far detected by the Kepler mission compared to orbits of Mercury, Venus, Earth, and Mars. Credit: Konstantin Batygin and Gregory Laughlin, Proceedings of the National Academy of Sciences (PNAS), March 23, 2015.
*******


Jupiter would have done this by migrating inward toward the Sun as it formed, resulting in perturbations to the many planetesimals and even multiple planet-sized bodies including any "super-Earths" that existed, causing a cascade of cataclysmic collisions that swept the inner Solar System clean with a paucity of widely-spaced material from which came, eventually, Mercury, Venus, Earth, and Mars. Our Solar System is now known to be an oddity in terms of the rarity of large planets close-in to the parent sun (or, for binary systems, suns). 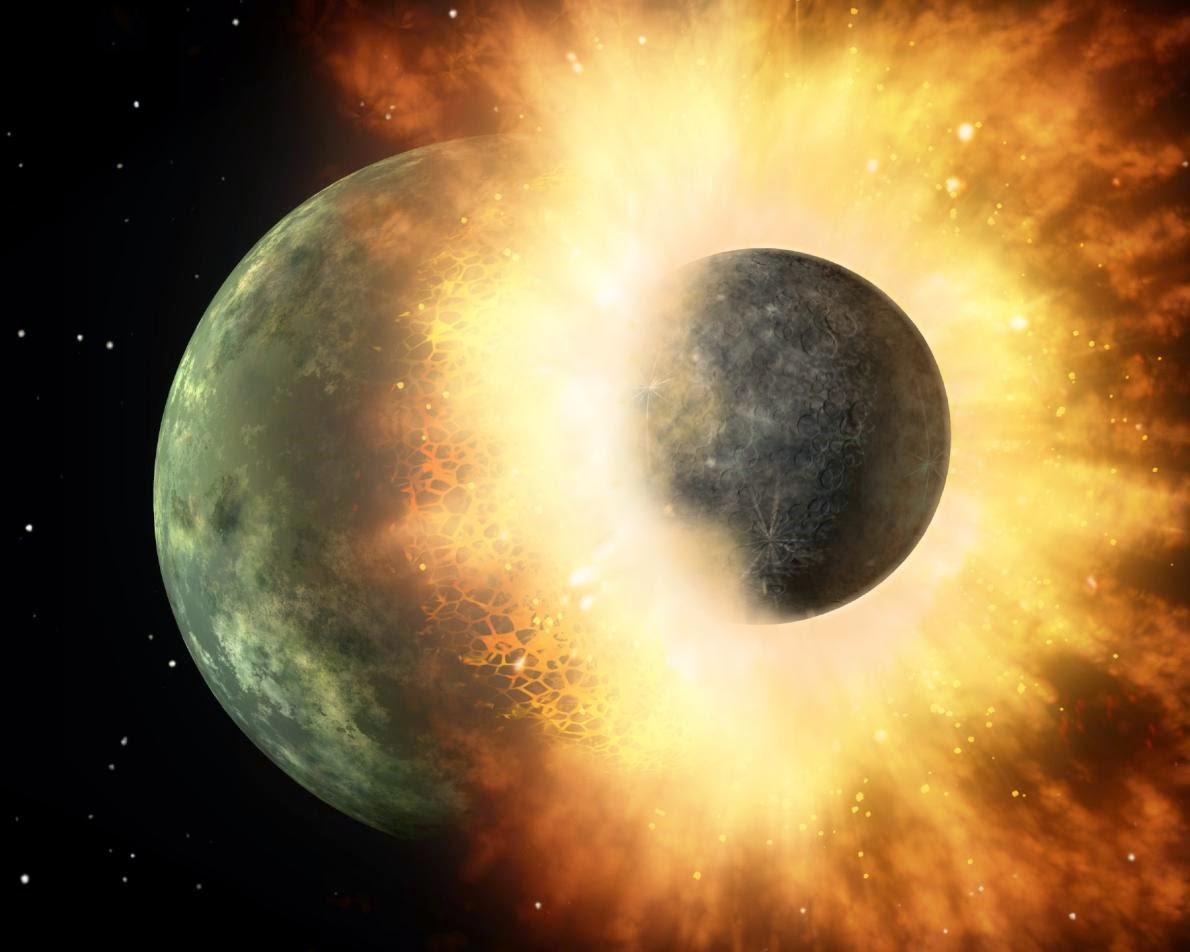 Artists conception of a planetary collision in the early Solar System.
Eventually, Jupiter was pulled back out to its current orbit by the formation of Saturn and resulting gravitational attraction. That there were all these other planets in the early Solar System is assumed given how common it is in the almost 1,700 single and multiple planetary stellar systems so far (mostly indirectly) observed. 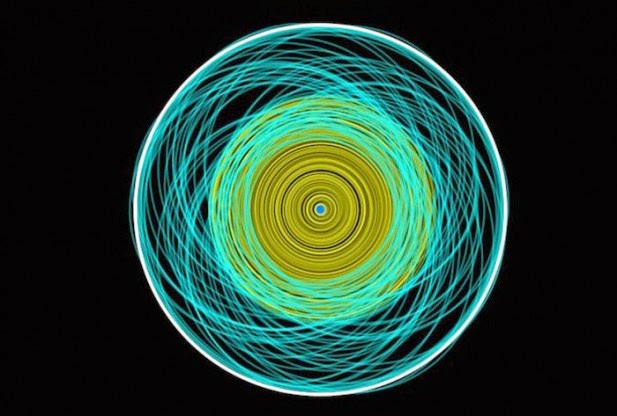 A simulation by the UC Santa Cruz and Caltech pair of astronomers depicting the eccentric orbits (turquoise) of planetesimals created by Jupiter (whose current orbit is shown as a thick white circle) in its Grand Tack. The result would have been countless cataclysmic collisions that removed any "first generation" of planets that crowded the inner Solar System Credit: K. Batygin/Caltech). See more here.
*******


In so doing, Jupiter's Grand Tack allowed the four relatively small and widely spaced rocky terrestrial planets to form. This includes Earth, which (via a separate theory) also got "lucky" through some titanic collision to create a giant double planet "Moon" that has played such a formative role in the development of life on Earth. 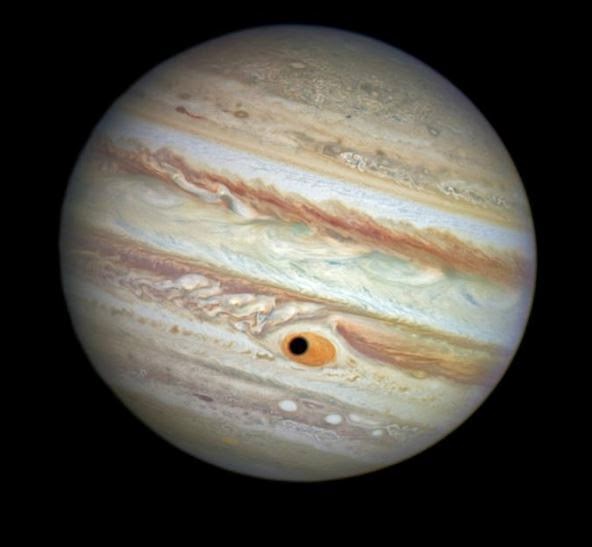 Outright freaky image captured by the Hubble Space Telescope on April 21, 2014 of the shadow of Jupiter's moon of Ganymede crossing right over the Great Red Spot, appearing as an actual eye.
Ganymede is the largest moon in the Solar System -- substantially bigger than Earth's Moon. Ganymede is also now thought to have a massive liquid salt water ocean under its ice, potentially with more water than in Earth's oceans. 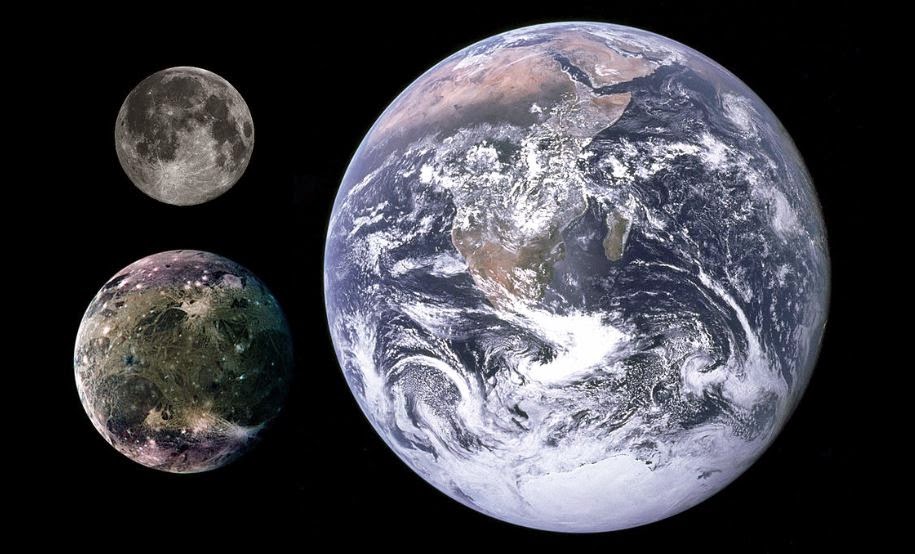 Comparison of the sizes of Planet Earth, the Moon, and Jupiter's moon of Ganymede.
*The Earth photo is from the Apollo 17 "The Blue Marble" iconic image taken December 7, 1972. My understanding is that the astronauts on board saw this image upside down based on their trajectory and orientation of departure.
*******


OK, that is all for now. I had intended to post a brief update but ended up writing the bulk of what I wanted to anyway. I will try to update the blog again tomorrow night after the gym.
--Regulus
Posted by Regulus at 12:04 AM