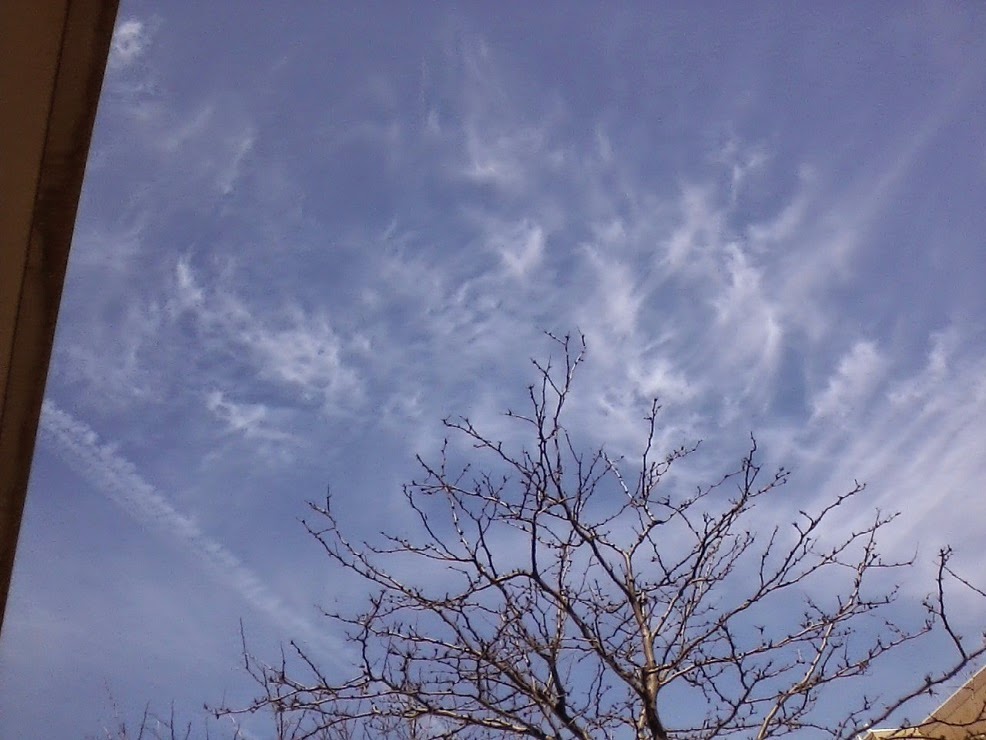 Cirrus clouds in a blue sky above L'Enfant Promenade, Washington, D.C., 2:06PM March 23, 2015.
Except for the lead image above, the pictures in this entry were all taken on Sunday afternoon in Arlington as I accompanied Gary on a visit to see his mom and take her to lunch and shopping at Ballston Common Mall and a nearby CVS.
*******


My apologies for the lack of updates last night. I had intended to post a quick entry after I got back from Larry's Lounge last night, or something this morning. However, for reasons that I don't really want to go into here, I was totally out of commission for about 12 hours -- from about 1130PM last night until roughly noon today. Furthermore, although I was able to get into work by 1:15PM today and work half a day, I wasn't fully functional until this evening at the gym. 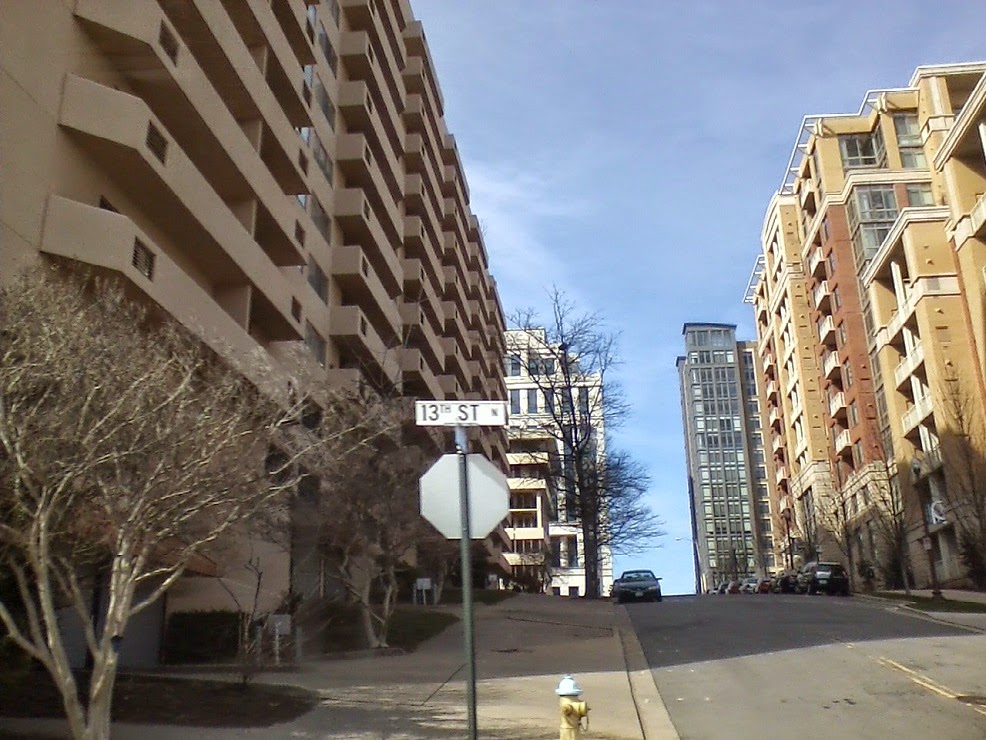 
I was actually home by 11:32PM and in bed by 11:45PM, but for the first 15 minutes or so, each minute or so that past during which I would nod off felt more like an hour. (I kept looking at my alarm clock's red digital display.)
It was sort of a dissociative experience. I looked once more and the clock's bright red digital display said 12:05AM. At that point, I nodded off what I thought was just briefly -- but when I looked at the clock, it now read 6:00AM (or within a few minutes of it). I've no recollection of those six hours.
I could have alien abducted in a UFO hovering, unseen, over Washington, D.C., and been probed in funny ways I wouldn't even know it. 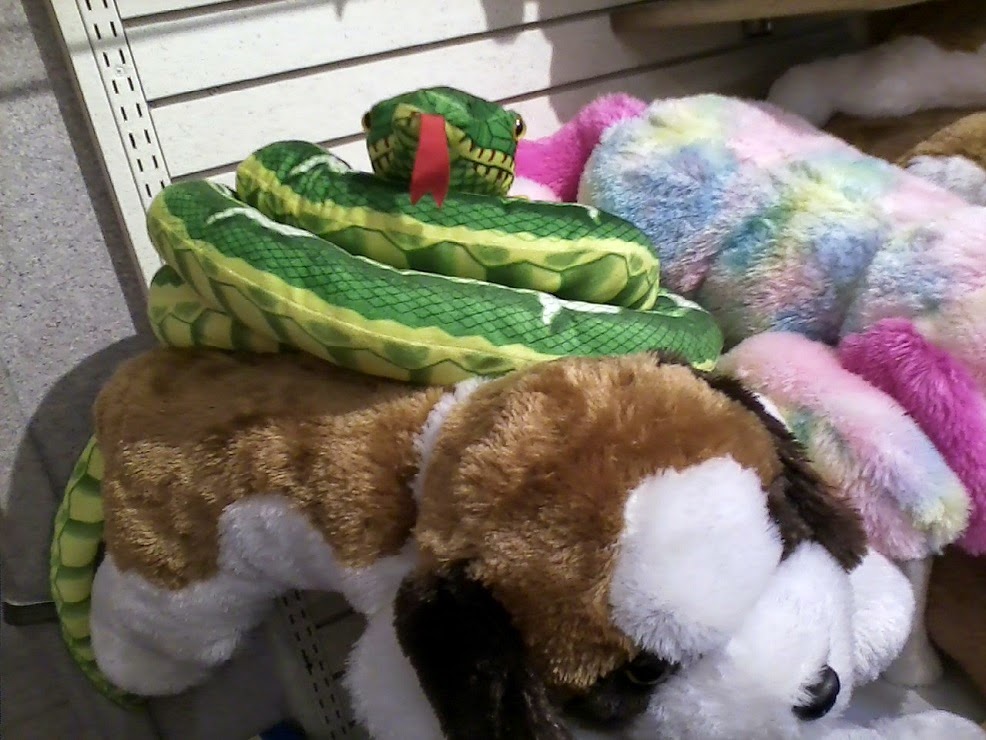 This was a large plush rattle snack stuffed animal at Curious Kids Toys, Ballston Common Mall, Arlington, Va., 5:01PM March 22, 2015.
This stuffed rattle snake -- which would surely scare a lot of children, rendering its usefulness as a stuffed animal problematic -- was rather coiled up. It would have made an interesting addition to the odd stuffed animal revue that occupies by bed.
Curious Kids Toys Store was filled floor to celling with plush stuffed animals, toys, and assorted playful bric-à-brac. However, I was very chagrined to observe that there were NO PLUSH HIPPOS. That's just bad business practice.
*******


The next six hours featured a more broken sleep, though gradually I started to feel better, less light-headed. (This whole story partially ties into the migraine headache I has this weekend and the Imitrex I take for it.) Eventually (around noon), I was able to get up and get ready for work -- and was grateful to be back into my regular routine.
However, I was bound and determined to make it to the gym this Monday night, if only to determine that I was not able to work out. To my surprise, I pushed through the regular workout including the 6+ mile treadmill jog (although I didn't do it at the usual inclines but only half of them), some weightlifting, and a swim.
I feel mostly fine now, though not entirely. 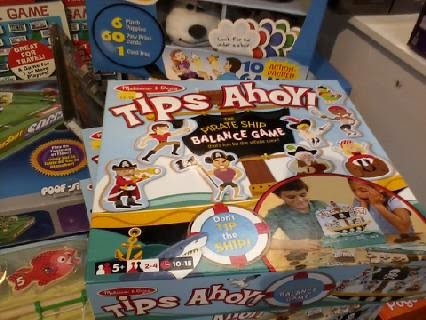 Tips Ahoy! Curious Kids Toys, Ballston Common Mall, Arlington, Va., 5:05PM March 22, 2015.
I was thinking that M-Wade Tipamillyun and the Unloved Crow Creature could play this game, except it would be set in a certain bar and involve pretend-cash tips in denominations of 5, 10, 20, 50, and 100 "queer bucks" (i.e., pink dollars). You toss the dice and lose turns for not being rude and/or insulting enough or insufficiently judgmental. And the person with the lowest tips at the end of the night is the biggest loser.
Oh, and the lightning round features the bar taken over by two drunken female "bachelorette" parties and a Prius station wagon filled with lesbians.
*******


Suffice it to say, that is never going to happen again. At this point, I'm just glad to be back to my normal self. Indeed, I find myself in the unusual situation of not being pissed off about something of a political nature that is totally beyond my control in the larger world and part of the media/entertainment razzle-dazzle machine. Indeed, I don't even really feel like posting all those links from last week that I was so keen on sharing / excerpting.
Prior to that, I actually had had quite a rather pleasant Sunday with Gary visiting his mom in Arlington. The three of us went to Ballston Common Mall, had lunch at the Rock Bottom Restaurant and Brewery there (the I Love Thai place was closed, possibly for good), and drifted about including through the Macy's and the Curious Kids Toys store (mentioned above) where the images in this entry were taken by yours truly. 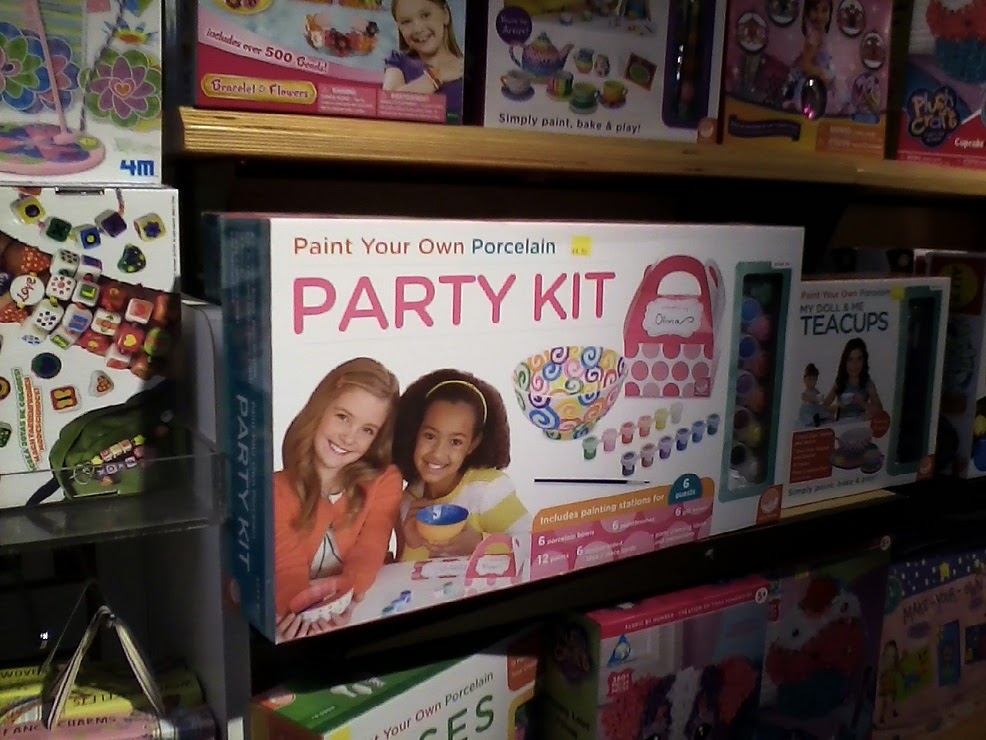 
Thereafter, we did some shopping at a CVS along Wilson Blvd near where his mom lives (she's close to the Court House Metro), dropped off her and her purchases, and headed back into D.C. We went to No. 9, which was fine, and then to Larry's Lounge, which was also fine, except there followed the reason for which I was out of commission, which I don't want to discuss right now.
As for tomorrow, I am unsure whether to go to the gym again or not. As I have plans on Wednesday, my next visit would then be on Thursday. 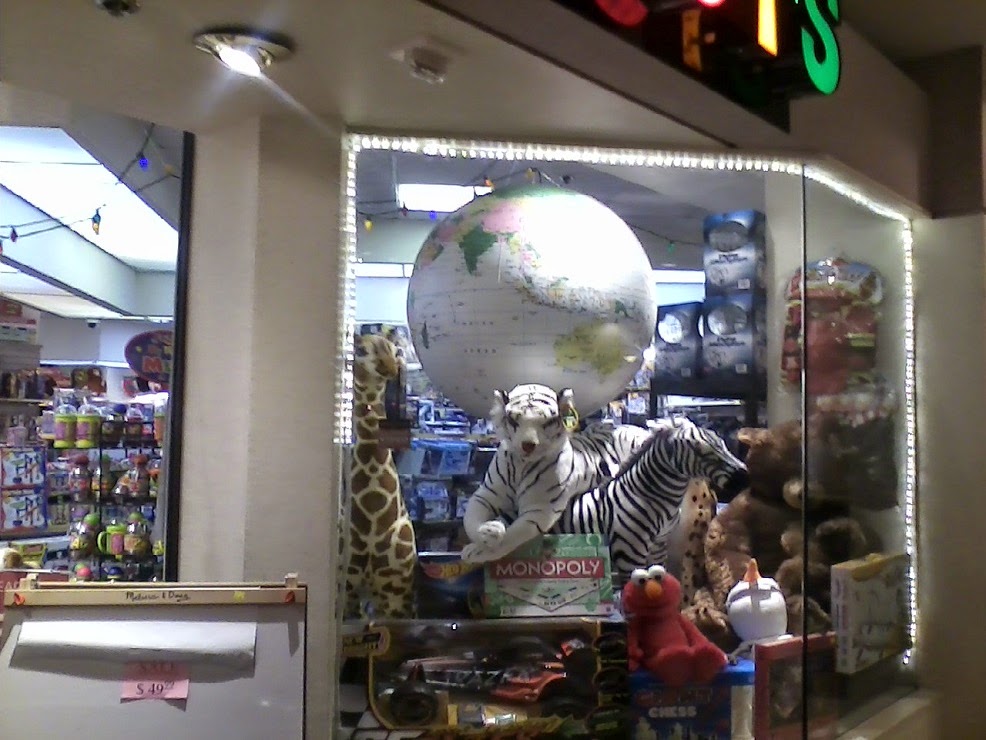 The window display at Curious Kids Toy store, Ballston Common Mall, Arlington, Va., 5:11PM March 22, 2015.
I was all about that giant inflatable Earth globe. Of note, the antipodal point for Washington, D.C., is somewhere in the Indian Ocean a few hundred miles off Cape Leeuwin in far southwestern Australia.
*******


It's a chilly, cloudy night and there is actually a chance of a few snow showers in the forecast into the wee hours even here in D.C. This particular winter season for the eastern part of the United States does not want to end, or only very reluctantly and slowly. Here is a relevant CWG entry on the topic (link embedded): Colder-than-normal pattern for East shows little sign of giving in.
As a result of this chilly spring, we actually might have -- for the first time in the 23 years I've been in and around the D.C. area -- the Yoshino "Japanese" cherry trees along the Tidal Basin at their blossoming peak when the culminating cherry blossom festival parade occurs. This year, that is scheduled for April 12th, 2015. (Typically, the blossoms peak weeks before the actual parade occurs.) 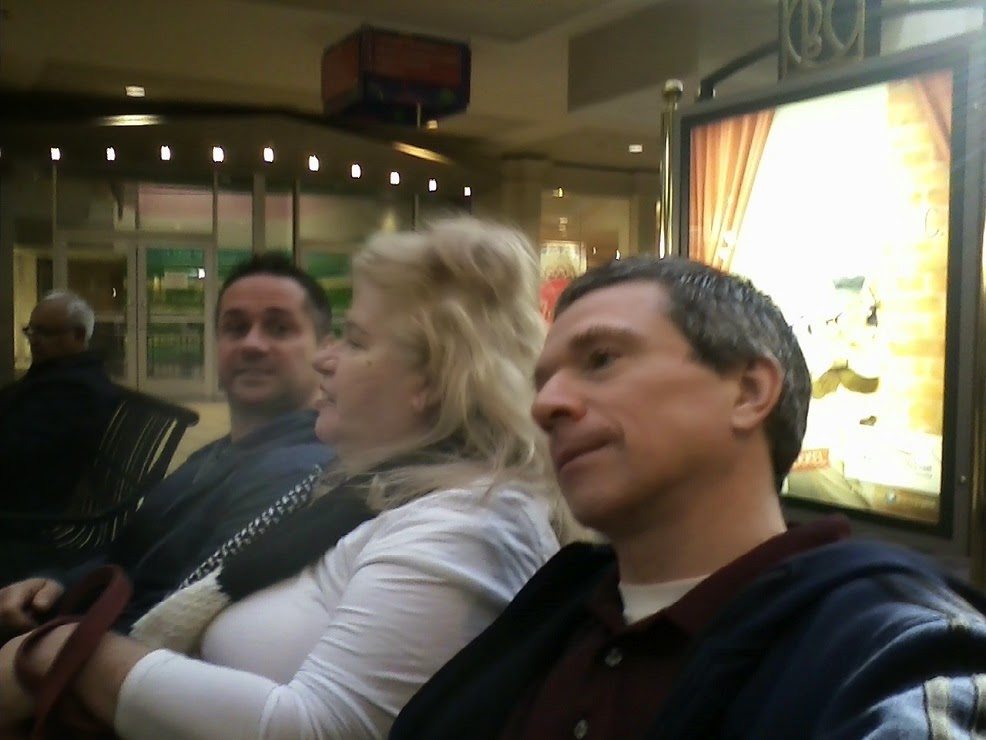 
OK, that's all for now. I've posted this blog entry, had some dinner (steak, jasmine rice, steamed broccoli and carrots, and lightly flavored fizzy (Seltzer) water), and now I'm heading to bed for a pleasant sleep and hit a restart on my work week tomorrow.
Good night.