I came across this YouTube clip in the wee hours of last night (motivated, obviously, by my previous blog entry) ...
Watch Bea Arthur get into a hilariously catty tête-à-tête with Madame on a CBS special in 1980 on the topic of Rock Hudson and how sexy the ladies found him. It ends with them singing "A Good Man is Hard to Find."
As I read in one of the comments, it doesn't get any gayer than this. Of course, few folks watching that long ago CBS special had any idea ...
By the way, I also came across this blog entry -- which is borderline outright inappropriate -- discussing how the late Wayland Flowers came up with the idea of the puppet Madame, although I've also heard that his mom was also partially the inspiration. As it is, I've heard this story before, namely, the connection to the old Trio restaurant on 17th Street (though I also heard the connection was to Annie's Paramount Steakhouse).
Interestingly, Flowers -- who died of complication of AIDS in May 1988, although his Oct. 12, 1988 New York Times obituary discreetly does not mention that -- was born exactly 30 years to the day before me, Nov. 26,1939. That also happens to be the day that Tina Turner was born.
As for original Madame the puppet (there appear to be others), according to Wikipedia, she is on display at the Center for Puppetry Arts in Atlanta.
******* 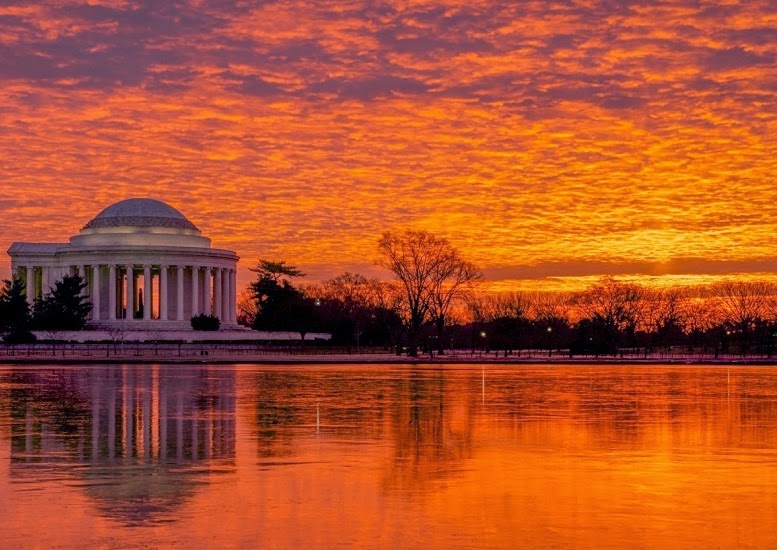 Sunrise at the Tidal Basin near the Jefferson Memorial, Washington, D.C., Feb. 7, 2015.
This image is taken by Kevin Wolf ("Wolfkann") and posted in a CWG entry featuring approximately 3 dozen pictures of the spectacular Saturday morning sunrise and Saturday evening sunset above the D.C. area (both of which I missed). While lovely, it is also depressing that this is all we have to talk about this winter -- sunrise and sunset pictures. (Yes, that's my "not liked" comment on the CWG entry as Arcturus24 to that effect.)
*******


The weather is just flat and boring today -- mostly cloudy, bright but dull, diffuse sunshine, and temps. climbing through the mid-40s F with a forecasted high damn near 60F.
UPDATED 9:12AM 2/9/2015


The high temperature at National Airport (KDCA) reached 68F, which tied the all-time daily record high set way back in 1900 (a pre-airport record for Washington, D.C.).

However, before everyone gets all "oooh-y and aaaah-y" about it, remember that KDCA sucks as a climate station and is representative only of itself, no matter what the Sterling LWX crew says or how much their pet Palka-Cabra SHE-Dragon roars.

Finally, the Maryland Science Center (KDMH) reached just 49F, indicative of the much cooler air not far to the north.


In other words, it's not even pretending to be winter anymore. However, another (modified) Arctic blast is expected by midweek, but again with no snow. The frickin' boring trough / dry northwesterly flow will resume that in the lee of the Appalachians means you get EVEN LESS than the life-draining crap promised you by the neoliberal Washington Consensus and its neo-conservative warmongering imperialist wing.
I am apprehensive about upcoming work week -- indeed, tomorrow (Monday). My new task in the past month has involved working directly for the head of my employer's larger corporate structure on press releases. This was necessary (I felt) because my Federal contracting work had ebbed, and I wanted to avoid being laid off. However, working for a person like this is not something I do very well because it is in a corporate management realm that is worlds apart from who and what I am.
I don't do it very well. Plus the arbitrariness and even fear that animates it makes it very difficult. The general topic of that work also is problematic for discussing anything on this blog. I really need a stable civil servant job.
OK, I'm heading to Quill's parents' suburban Silver Spring sanctuary. My next update likely won't be until late tomorrow / early Tuesday. I'm going to take my bike on the Metro and ride it to their place (near Four Corners).
--Regulus
Posted by Regulus at 1:00 PM