Snowboarding (and Cartwheeling) Pics from Fort Reno Park; Just a Few Thoughts on MSLP Hose Bagginess; and D.C. Arctic Cold, Now and Then 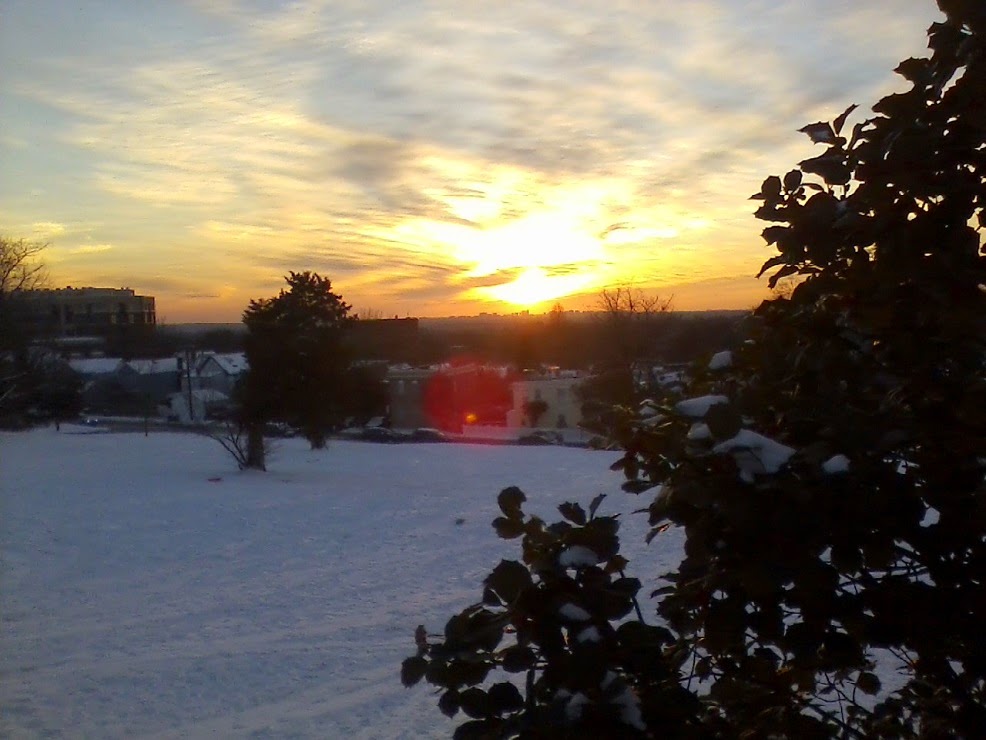 
This entry includes some pictures that I took on a walk through the Friendship Heights and Tenleytown sections of Upper Northwest here in D.C. on Tuesday evening following our minor Monday night / early Tuesday morning snowstorm. They are posted because I want to post them and to break up the test. My walk was after I stopped for an early dinner -- or maybe a very late lunch -- at Chads on Wisconsin Avenue. 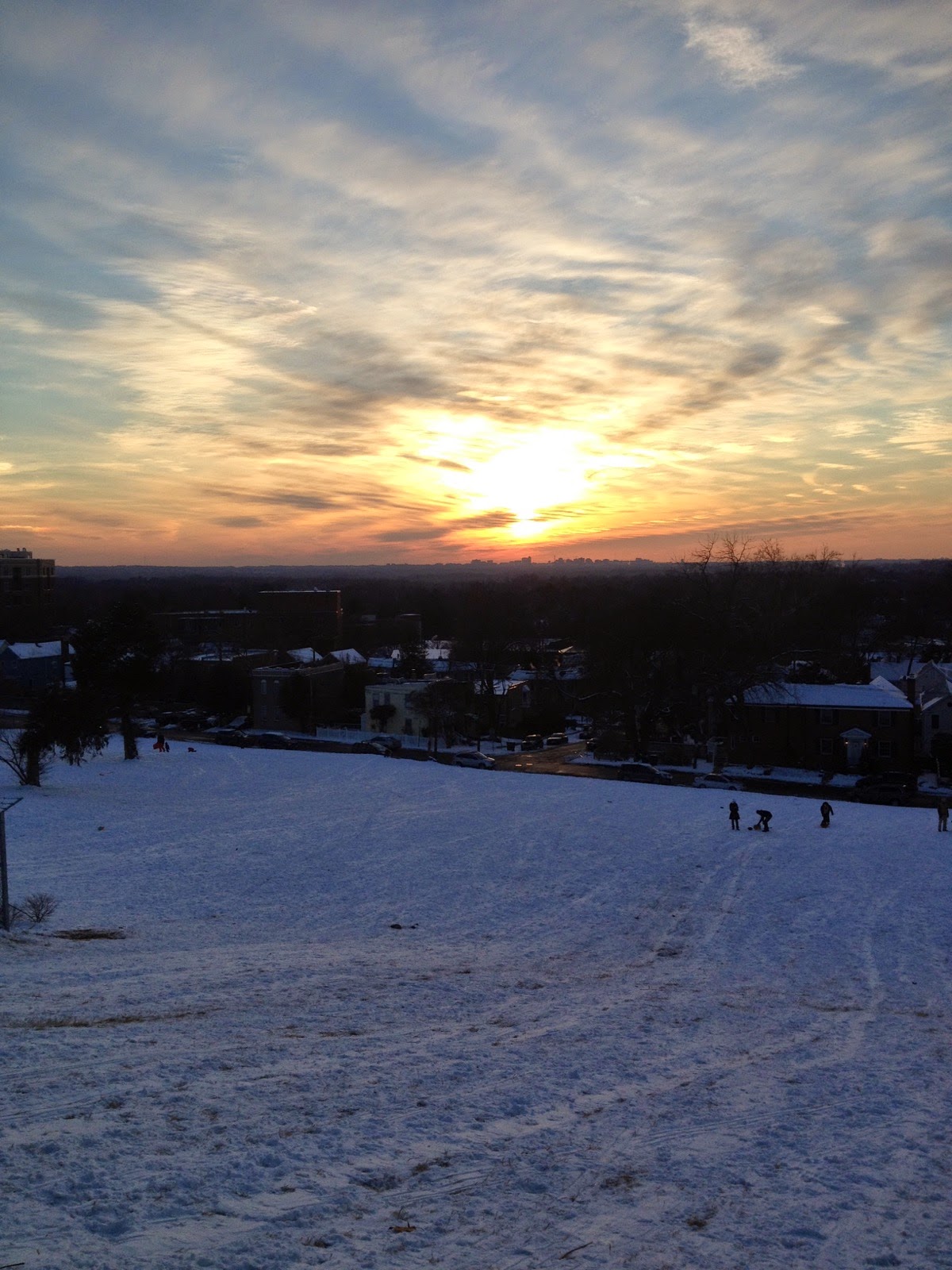 Another picture of the view from Fort Reno Park, Washington, D.C., looking west a short time earlier, 5:20PM February 17, 2015.
This has a higher resolution (I took it with my Smartphone rather than my flip open) and you can more detail including the sledders below. (I think "sledder" is a word.)
As for Fort Reno, it is one of the National Park Service-administered "Fort Circle" series of Civil War era Union Army escarpments encampments in and around the District of Columbia that are now parks. It also contains the highest land elevation in the District of Columbia -- put at 409 feet above sea level (though I've seen 410 feet listed as well). 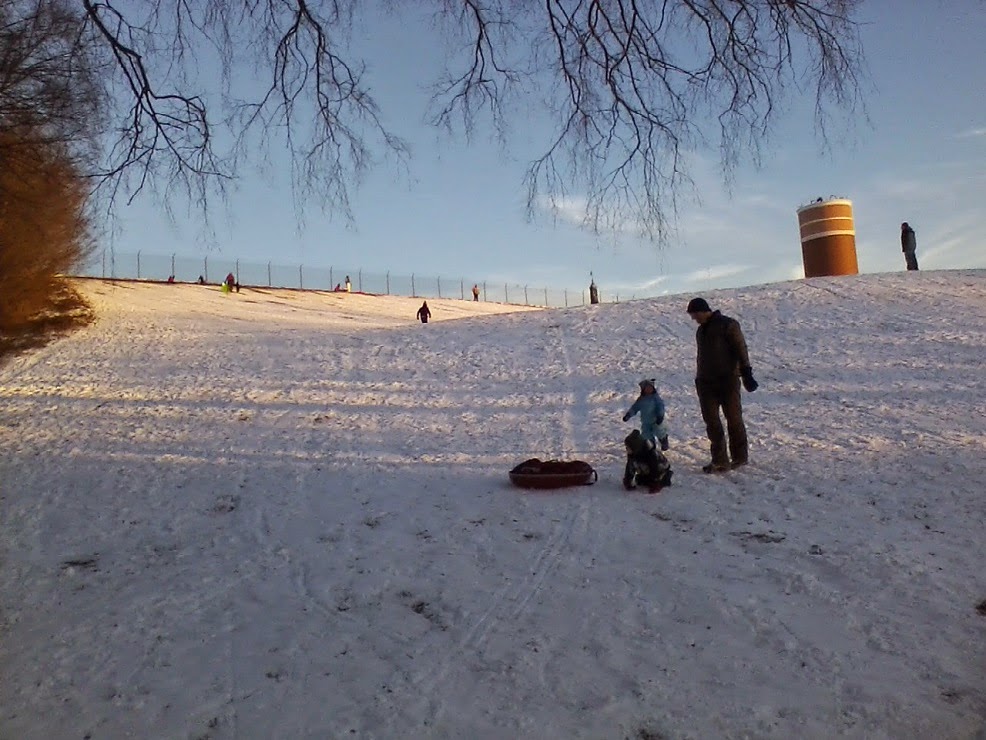 Local residents of Tenleytown / Friendship Heights with their young children take advantage of the snowy conditions to snowboard down the western "slope" of Fort Reno Park, Washington, D.C., 5:23PM February 17, 2015.
The western slope of Fort Reno Park has a sweeping view for miles to the west across upper Northwest D.C. and well into Northern Virginia that includes towers of Tysons Corner and even Reston. You can also see on clear days the first ridges elongated peaks of the Blue Ridge about 50 to 60 miles to the west.
******* 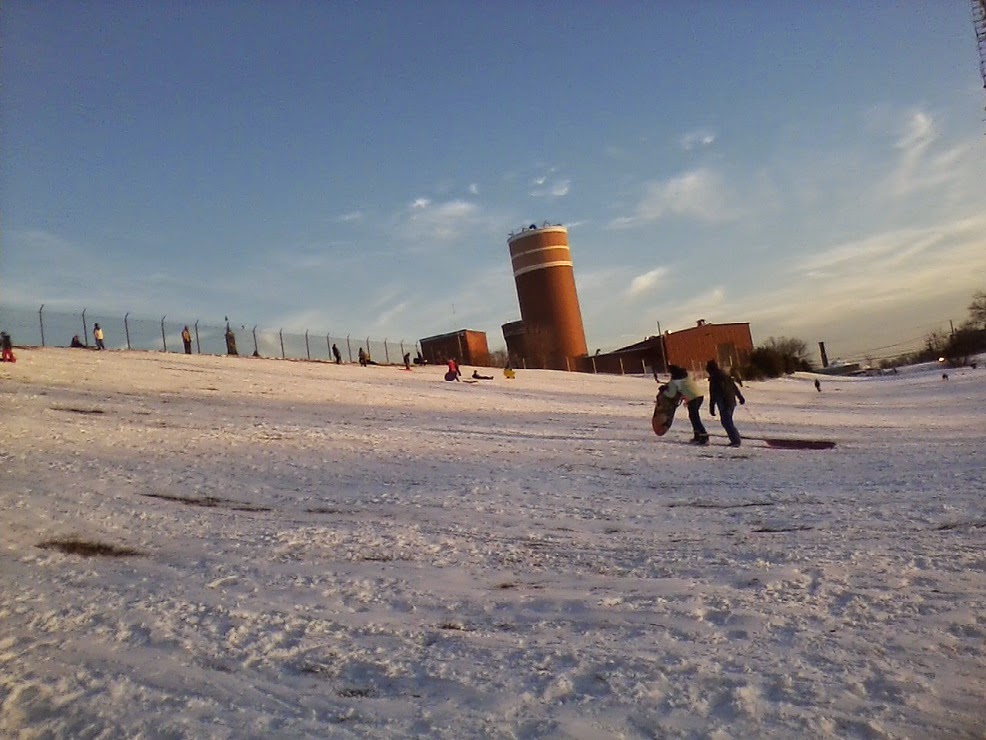 More sledders, or rather, snowboarders, at Fort Reno Park, Washington, D.C., 5:24PM February 17, 2015.
Note that there is a fence along the top of the park. That is off limits to the public. The District of Columbia Water & Sewer Authority's Fort Reno Pumping Station located there.
However, according to this site, the large tubular structure visible in this picture is actually NOT a water tower associated with the station but rather one of a series of "Presidential Emergency Facility" (PEF) sites for the President to survive a nuclear attack on Washington.

This particular Fort Reno Park facility is called "Cartwheel" and is one of a series of seven such PEF facilities (listed out with code name and physical location). It is the only one in the District of Columbia (well, in addition to the White House itself, which is dubbed "Crown"). The others include two in the Catoctin Mountains -- Camp David ("Cactus") and Raven Rock (Site R) -- and others in Pennsylvania at Cross Mountain ("Cannonball") and West Virginia (Roundtop Summit). (It's incorrectly listed as "Virginia" in the table.)
I'm not sure I believe all of this. Only in D.C., though, would a park include the absurdity of a nuclear war hideout and the not-far-from-here wealthiest section of the city also be a Superfund site.
As it is, I always thought it was just an FAA VORTAC up there atop Fort Reno Park and that's why it was fenced off. Not sure why I thought that.
******* 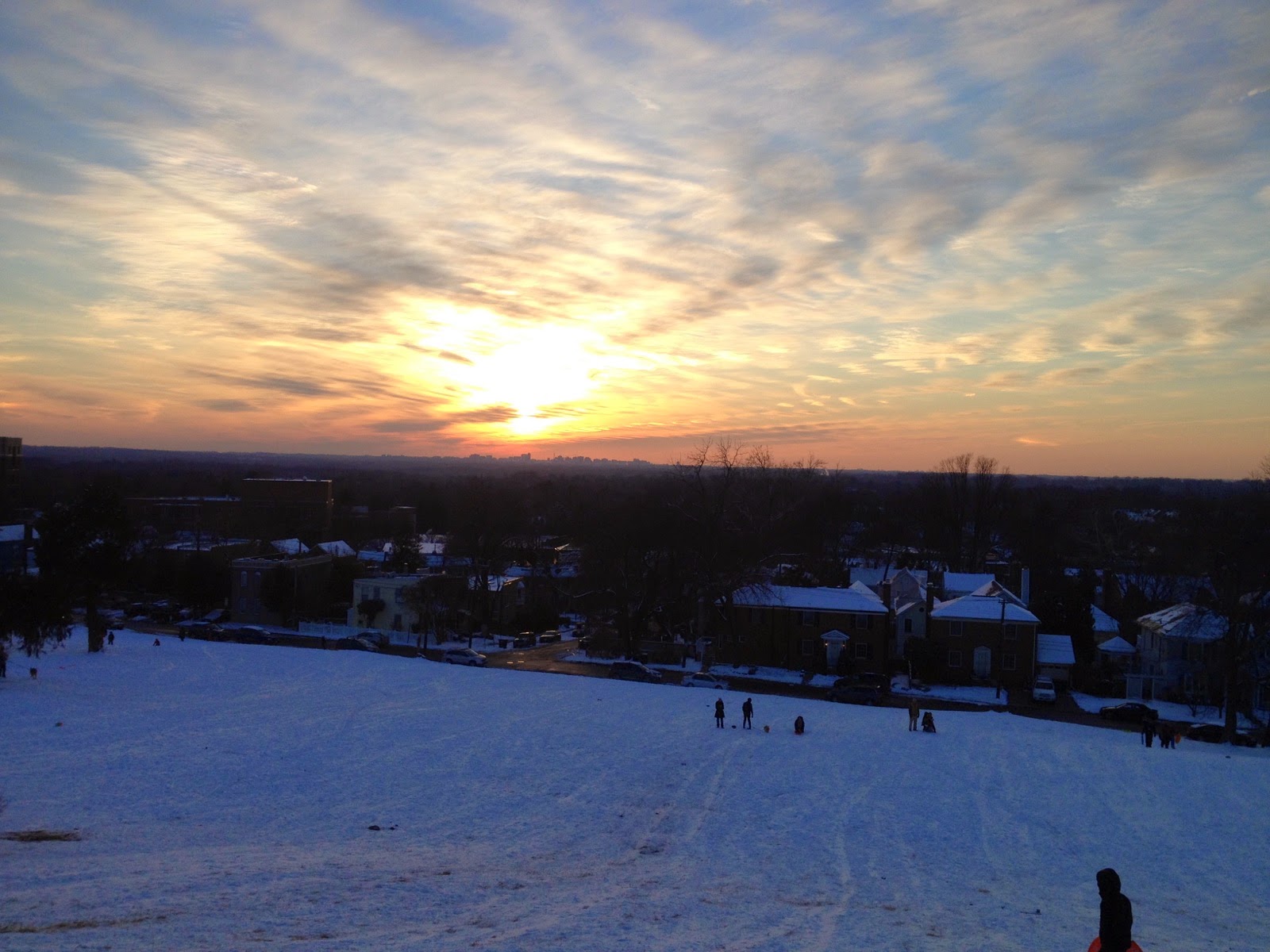 
An area forecast discussion (AFD) was issued at 9:30PM on Wednesday by the Baltimore / Washington NWS Forecast Office (also called "Sterling" since it is located in Sterling, Virginia and known by its three-letter identifier "LWX").
In the discussion, the long-term forecaster ("DFH" -- not WOODY!) writes that s/he is skeptical that it will warm up as quickly on Saturday into Sunday at the surface despite a southerly flow as a storm system pulls up the Appalachians and eventually brings in enough warm air to turn any snow and mixed precipitation to all rain on the mid-Atlantic coastal plain.
The forecaster wrote the following (and "MSLP" refers to "mean sea level pressure"):
AM SKEPTICAL OF JUST HOW HIGH SOUTHERLY BOUNDARY LAYER WINDS GET SATURDAY AFTERNOON AND ESPECIALLY SATURDAY NIGHT GIVEN INITIAL BAGGINESS IN MSLP PATTERN OVER THE AREA.
I offer one slight adjustment: Please insert the word "HOSE" in front of "BAGGINESS" and then it makes more sense for the usual D.C. weather-fare. 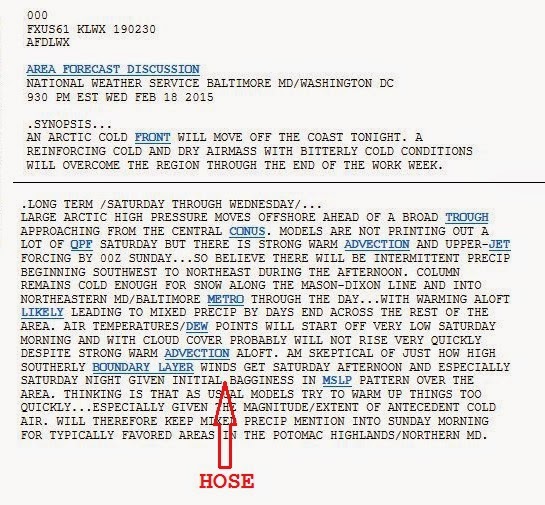 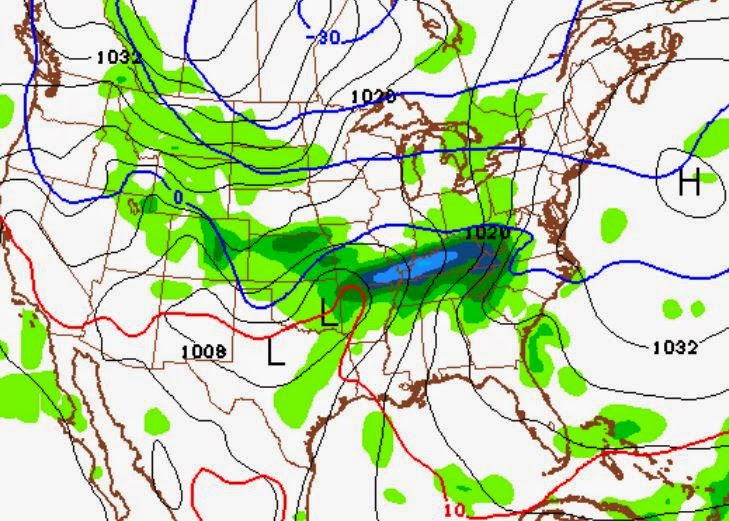 The "bagginess" simply refers to the curvy shape of the isobars extending from the retreating Arctic high in the western Atlantic Ocean. Those isobars mean that air pressures (including MSLPs) will be elevated, which also means the cold air will not have fully eroded and a wintry mix is more likely despite the ostensible position of the 850mb 0C isotherm.
*******


As for the impending cold wave, the Arctic front blasted through earlier tonight although not as dramatically as the one last week. Even in the District there was a 5 minute burst of snow, but it was no big deal. The cold air is now rushing in.
Here is the relevant Capital Weather Gang entry (link embedded): Painful cold and wind sweep into region overnight (brief snow squalls have ended). 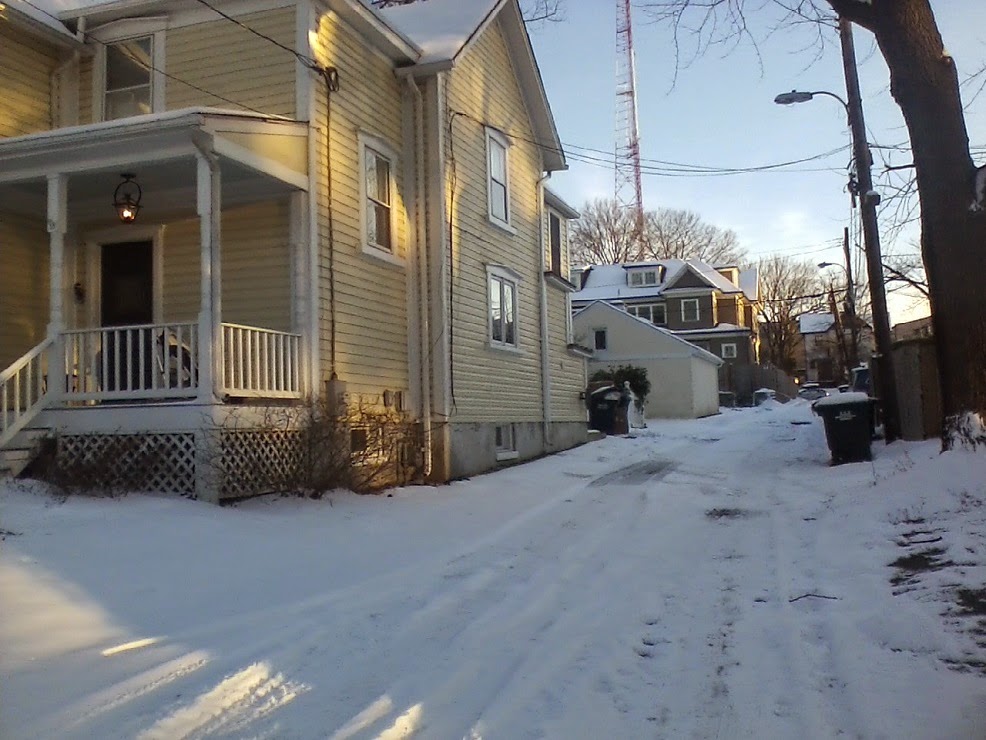 
Also, below is a reposting of the climate information from the LWX AFD earlier on Wednesday: 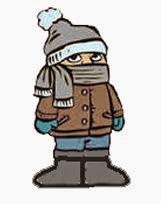 .CLIMATE...
AFTER PASSAGE OF THE ARCTIC FRONT ON VALENTINES DAY NIGHT...DAILY HIGH TEMPERATURES ON THE FOLLOWING TWO CONSECUTIVE DAYS...SUNDAY AND MONDAY...FEBRUARY 15 AND 16...DID NOT MAKE IT OUT OF THE TEENS AT BOTH DULLES ... IAD... AND BALTIMORE WASHINGTON INTERNATIONAL ... BWI.


THE LAST TIME IAD AND BWI...AS WELL AS WASHINGTON DC...DCA...HAD TWO CONSECUTIVE DAYS WITH DAILY HIGH TEMPS FAILING TO REACH 20 DEGF WAS 21 YEARS AGO...JANUARY 19 AND 20 1994.
LOOKING AHEAD FOR LATE THIS WEEK...ANOTHER ARCTIC FRONT WILL CROSS THE AREA TONIGHT. FORECAST HIGHS THURSDAY...FEB 19...AND FRIDAY... FEB 20 ARE CURRENTLY FORECAST TO BE ONLY IN THE MID TO UPPER TEENS FOR NOT ONLY DULLES AND BWI BUT ALSO WASHINGTON DC.
AND MORNING LOWS FRIDAY FEB 20 ARE EXPECTED TO BE THE COLDEST OF THE SEASON WITH MIN TEMPERATURES OF ZERO TO 5 DEGF ABOVE EXPECTED AT IAD AND BWI...AND 5 TO 10 DEGF ABOVE AT DCA. 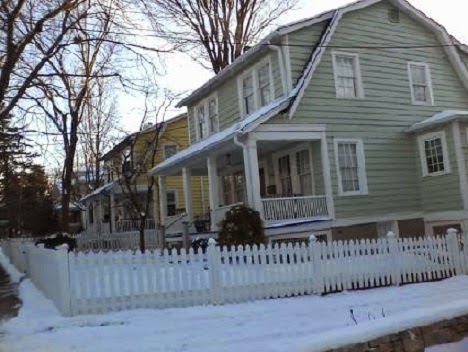 
First, I always refer to the climate stations with the "K" identifier in front of them, so KDCA, KBWI, and KIAD (and KDMH when talking about the Maryland Science Center at the Inner Harbor in Balmer, Merlin, hon).
Secondly, the Jan. 19 - 20, 1994 cold snap was the last time the surface temperature was 0F or lower. In fact, the morning low on the 19th was a daily record low of -4F. The high that day was just 8F for a record low maximum. For the 20th, the record low was -2F in 1985 (the day of Reagan's second inaugural when it was moved inside due to the cold). 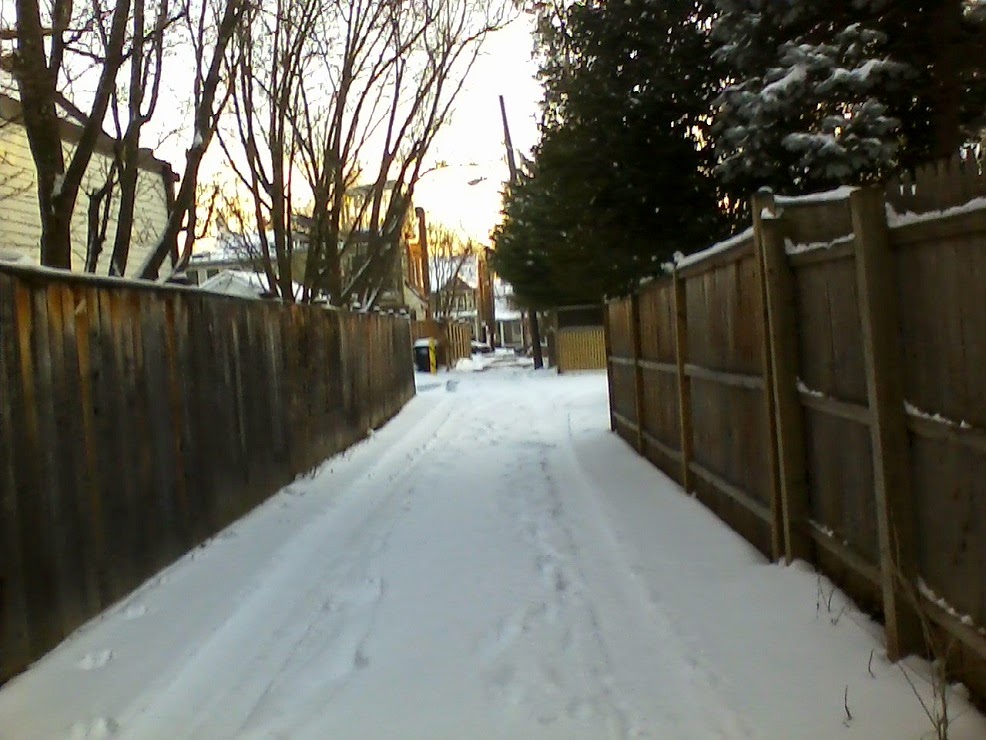 The (snowy) alley between the 4200 blocks of Harrison and Garrison Streets NW, Washington, D.C., 5:17PM February 17, 2015. These streets are the three-syllable "H" and "G" streets, respectively, in this part of the D.C. street grid. I'm sure it has caused no end of confusion to countless people, especially visitors, over the decades.
*******


Of note, that -4F reading, BTW, was "only" 11F warmer than the all-time Washington, D.C., record low temperature of -15F set on Feb. 11, 1899 in the unrepeatable winter of 1898 - 1899. The winter here that long ago year was more like central Maine or central Michigan.
More generally, it was in the pre-National Airport period when the climate was just colder and the climate station not always modified by the tidal Potomac River to create a sort of micro-climate more akin to the Norfolk area.
This KDCA information is available on the new and improved LWX page DCA Normals, Means, and Extremes. It is for temperature, precipitation, and snowfall.
The corresponding KBWI one is here and the KIAD one is here. 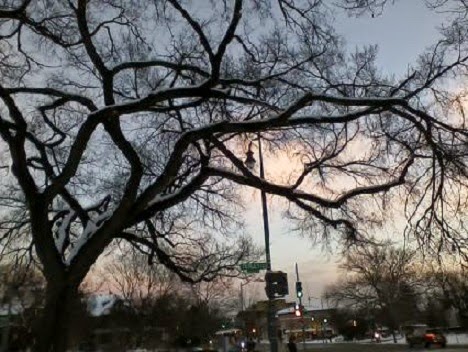 A picturesque snow-dusted elm tree at Tenley Circle, Washington, D.C., almost silhouetted on the evening sky, 5:49PM February 17, 2015.
Tenley Circle isn't exactly a true traffic circle -- more a jumble of streets intersecting Wisconsin Avenue.
This is a whole (nice) part of the city with which I rarely interact. I walked to Massachusetts Avenue and caught an N3 bus back to Dupont Circle -- but after I met up briefly with Nick, who lives in this part of the city. We went to the Starbucks in the new mega Giant grocery store near the National Cathedral.
*******


Thirdly, the Jan. 19 - 20, 1994 cold wave also was accompanied by a VINTAGE ROYAL D.C. area snow-screwing as a forecasted blizzard ended up a nightmarish ice storm of freezing rain and sleet because of a thin film of air with a temperature just above 0C that was located between the surface and 700mb and that was probably (like Saturn's awesome rings?) no more than one kilometer thick, and quite possibly even thinner. 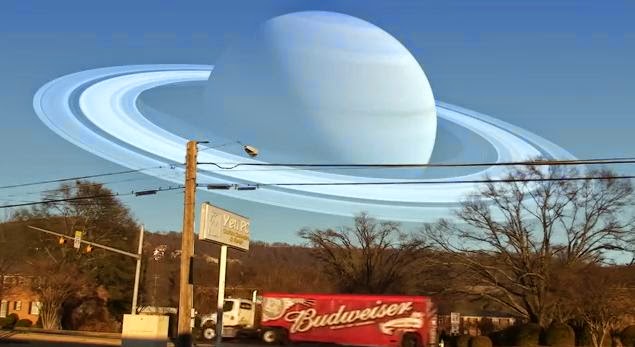 
OK, that's all for now. Let me just say that this was so not the entry I intended to post. Furthermore, I am way behind on posting all kinds of entries INCLUDING the Wall-P & Me & Hysterical Gee Make Three short stories.
As for my next update, it will likely be on Friday evening since I do not plan on taking the computer home tomorrow. It's a non-gym night (i.e., a bar happy hour), plus it's going to be too flippin' cold to tote it around.
--Regulus
Posted by Regulus at 2:30 AM