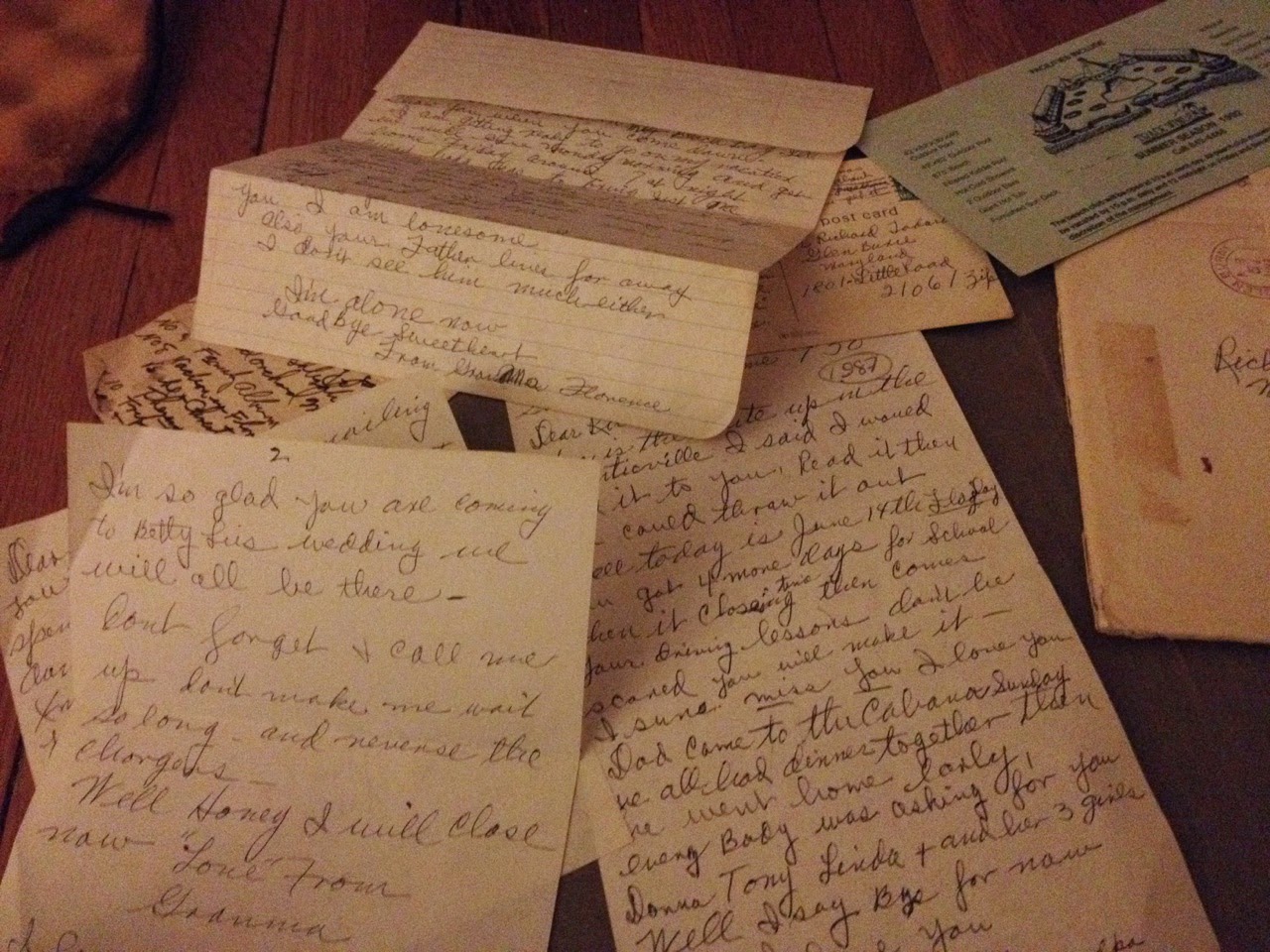 Other written letters from my grandmother I still have.
*******


What follows is a letter that my late and still much-missed paternal grandmother, Florence Acerra Todaro*, wrote to me on what I surmise was October 31, 1985. It was written in Long Branch, New Jersey. I was living like a frickin' idiot in Glen Burn Out, Maryland, going to the completely forgettable Glen Burn Out High School there.
*Yes, her initials were "FAT" although she was 5'2" and weighed all of 95 pounds on a good day. 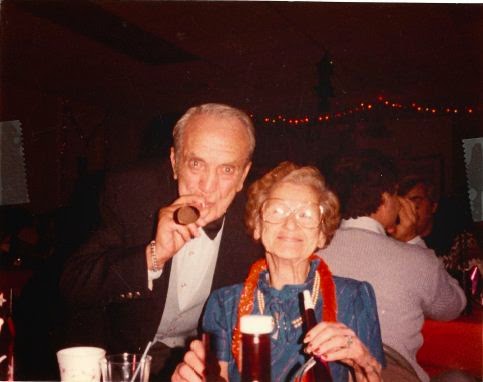 My grandma with my grandpa (Lewis Todaro) in Long Branch, N.J., circa 1985. (Actually, it might have been in 1986 or as late as early 1987). I think this is one of the last pictures I have of them together.
During fights, lovingly recorded by my dad on old tape recorder with ancient cassette tape, when they really were rolling, she sometimes referred to him as a "BITCH ANIMAL!" and (for her, a real insult) "A SHOW OFF" while he would beg the Universe, arms flailing, for a way -- some way, any way -- to leave her: "ANYTHING! TO GET RID OF A SONUVA-STUPID BITCH!"
Anyway, without further ado ...


Dear Richard,
How are you doing O.K. I said I would mail you $25.00 Buy what you like. When you get this letter your mother will be home from the Hospital. I hope she is feeling better now.
You know Richard when I came home from the trip I was so sick I had to go to the Doctor for a check up. I had a fever I was sick for 2 weeks. I feel better now.
Today is Halloween be careful of the kids maybe one or two might be nuts.
You and Dad are so far away I don't see you or him much any more every time you call you can reverse the charges don't forget -
Tomorrow is the first of Nov. this month you will be 16 years old You are getting there, a big boy now
How are you getting along with Ray is he treating you good
Don't forget what I told you.
I am going down stairs to mail this letter so you can get it for the weekend
Love from Grandma Florence -
I love you and I miss you.
*******

NOW, for some GOOD NEWS and BAD NEWS... 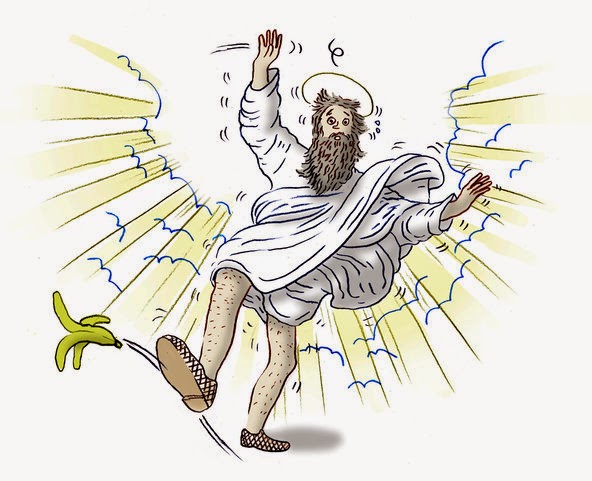 The GOOD NEWS is that THE LORD -- as in that Judeo-Christian Jehovah Three-In-One, a.k.a., Yahweh, the one reads the Wall $treet Journal and whose Son personally guides the dating, mating, and shopping habits of Americans including at taxpayer-financed Kentucky Creationist theme parks, not to mention the legal decisions of Alabama Supreme Court justices** -- let me jot down the contents of that note. I was planning to post it as a blog entry with a scanned copy of the letter plus what I wrote above. I jotted it down yesterday (Sunday) quickly before I left the apartment. 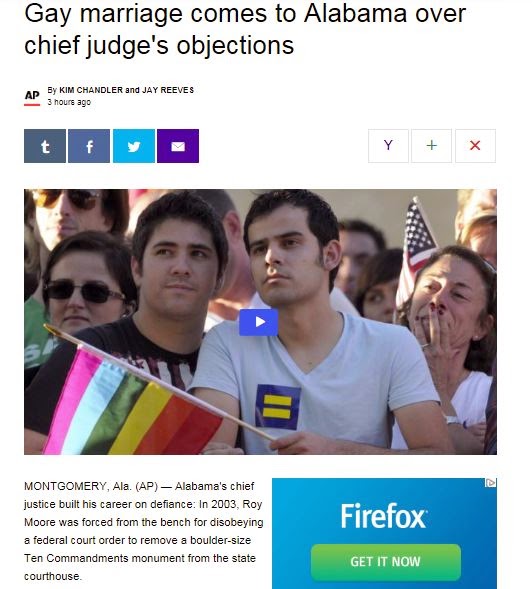 **Speaking of which, above is a headline from Yahoo News on Monday that I never thought I'd see. Naturally, Alabama Supreme Court Chief Justice Roy Moore is as crazy and hateful as ever, urging the usual Southern nullification approach. (Too bad I can't "nullify" my tax dollars going to Alabama.) Anyway, the above-picture -- when and wherever it was taken -- is awesome, though.
******* 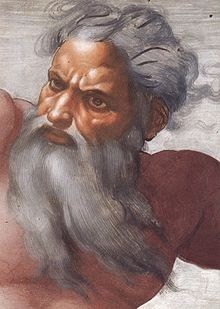 The BAD NEWS is that THE LORD -- as in ostensibly He In Whose MIND Each Neural Pathway Flash is a New Big Bang in the Self-Replicating Inflationary Multiverse -- did not intervene as I somehow, someway, THREW OUT a folder that contained ALL my printed out tax information for 2014 ALONG WITH this handwritten letter from my grandma.


I did this because I was going through a larger container on my floor that holds a variety of folders including my tax information and personal stuff such as the letters and postcards she sent me back in the 1980s. It was in that folder because I was going to take it to work to scan it. However, I MUST have included it in a pile of stuff I was tossing.
I realized this on Monday, initially at work and later at the gym as I pondered it. There is simply no way I could have somehow thrown it out at work. I looked for an hour and could not find it.
Thank You, THE LORD. To quote the late, foul-mouthed Sam Kinison, LOVE YA!
As for the other content of that folder, well, I have electronic copies of all the other stuff. 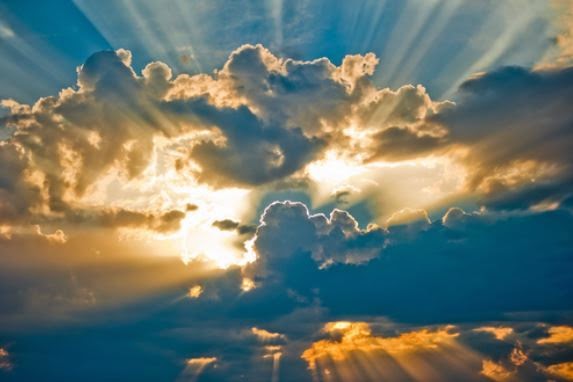 Again, THANK YOU, THE LORD.
As for the letter, a few points ...
First, my paternal grandma almost always called me "Robert" while she called her son (my dad) "Richard" -- after her other son and my uncle and for whom I am named, Richard, who died in March 1963. In writing, though, she got my name correct.
Secondly, in the letter, grandma was referring to the fact that my mom -- her ex-daughter-in-law -- had a major and invasive surgical procedure at that time and, thankfully, she came through it just fine. Secondly, she (obviously) wasn't a big fan of my stepfather, Ray, although subsequently she and my grandfather were quite hospitable to both him and my mom on at least one occasion during New Jersey visits back then.
Of course, I remember way back in 1974 - 1975 -- shortly before Ray and mom headed to Belgium for his military assignment at SHAPE -- when they (my mom and Ray in my mom's old Rambler) would drop me off in the driveway at 368 Kirby Avenue in Long Branch where we used to live. She came out once and said, "I don't want you in my driveway!"
Thereafter, I always got dropped off around the corner on Van Court Avenue -- to the point that my grandma once asked why I wasn't being dropped off in front of the house ...
Of note, Gary had a similar childhood situation and we sometimes joke with the line: "If SO MUCH as ONE WHEEL of HER CAR is in my driveway, I'm callin' the cops!"
Ha ha 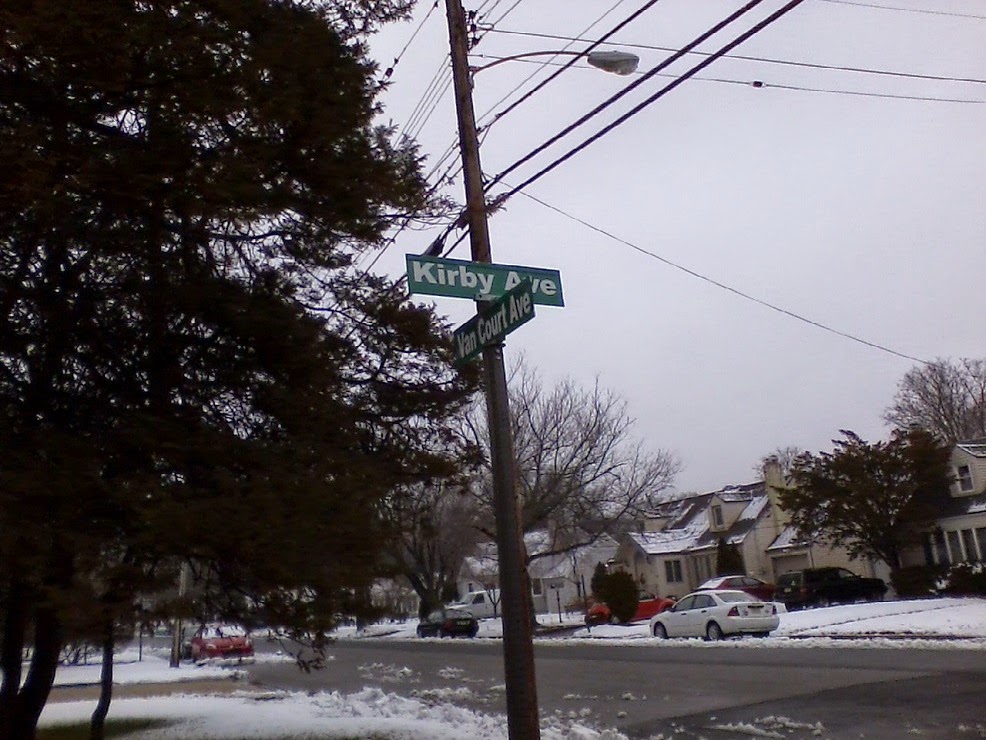 Above: a picture of the actual intersection of Kirby Avenue and Van Court Avenue as seen on Jan. 24, 2015 where I would get let off a lifetime and a world ago. The signage is different but the names are the same.
*******


As a third and final point, I should have returned to New Jersey -- to Long Branch -- during the mid-to-late 1980s and found a way to live with her though she and my grandfather were in a senior citizens apt building (Ocean Pointe a Towers on Pavilion Avenue -- it's still there). It would have been better for all concerned including my mom and Ray. I could have just come back when it was time to go to college. My crazy dad was at his house in the woods in Upper Freehold Township, his glorious initial move to Florida still 7-1/2 years in the future.
Well, anyway, at least I got the letter's contents posted. 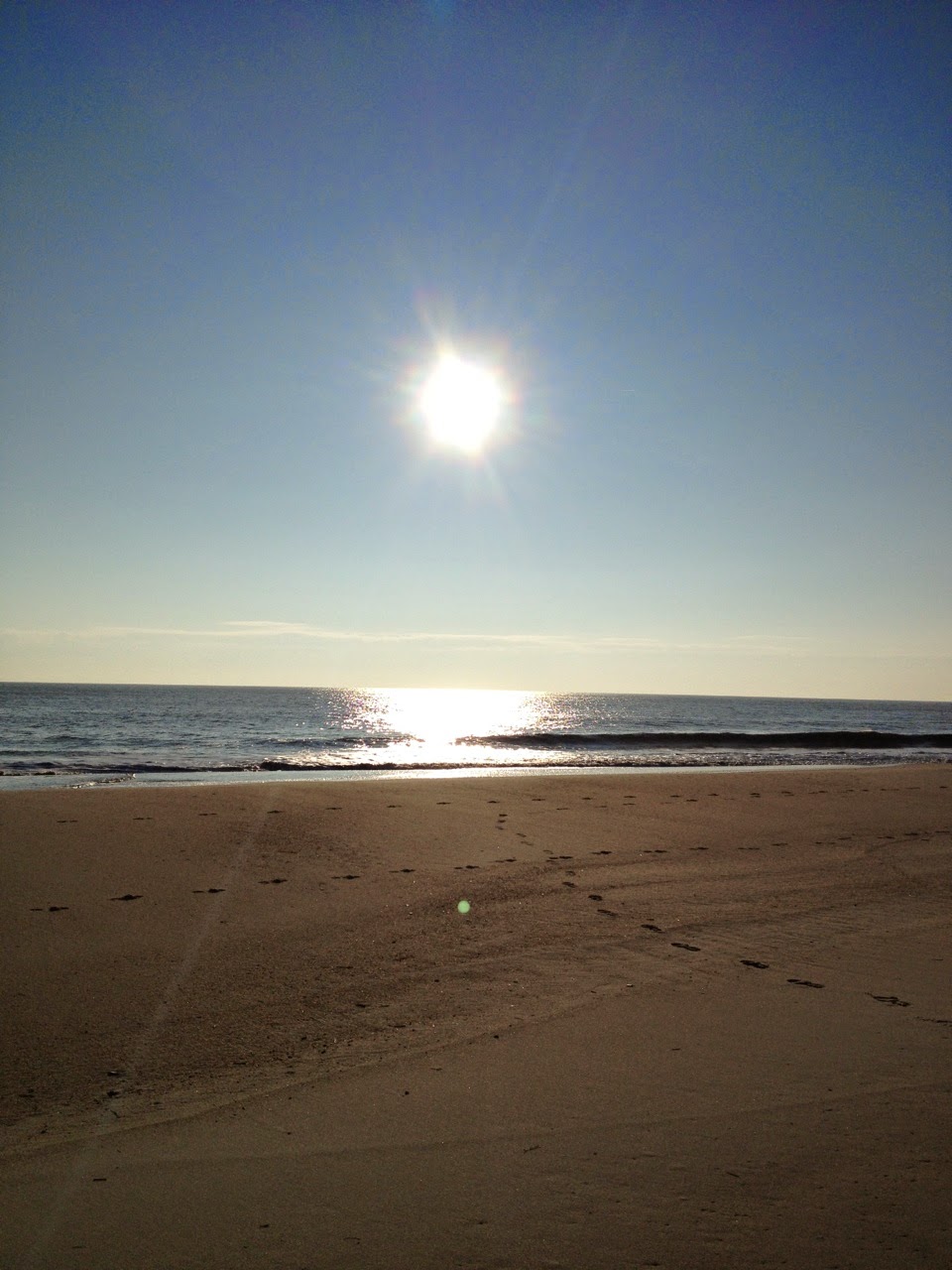