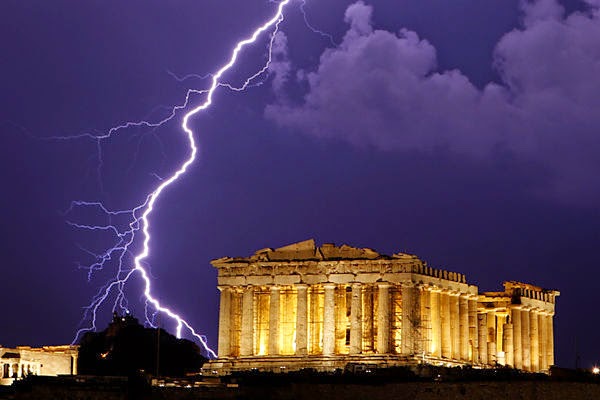 Let's get this out of the way first: Greece needs to exit the euro IMMEDIATELY and stop even pretending that it can work with German banksters and their German government puppets. It is a lost cause.
And the same holds true for Germany's ECB, EU, and IMF debt collectors. Those debt collectors, sophisticated and urbane Europeans though they might be as individuals, are collectively acting like any low-rent, ass-hat American-style debt collector in any office park somewhere in the South.
As Greek Prime Minister Alexis Tsipras said, the "blackmail" must end and it must end now. 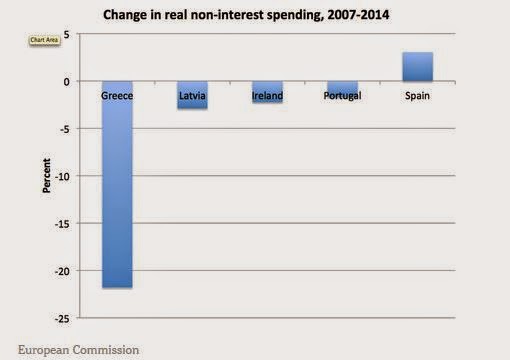 A comparison of the change in real non-interest spending from 2007 - 2014 for Greece, Latvia, Ireland, Portugal, and Spain.
This shows the savage extent of austerity already imposed by Greece upon itself to meet impossible and self-defeating demands.
*******


Let's be clear on what Greece faces: Endless demands by ultimately amoral German bankster institutions and their supra-national European puppets to maintain some bullshit and arbitrary primary surplus of 4.5% of Greek GDP that goes as a sort of Versailles-like reparations to the Davos set and Fred Hiatt's Washington Consensus crowd. 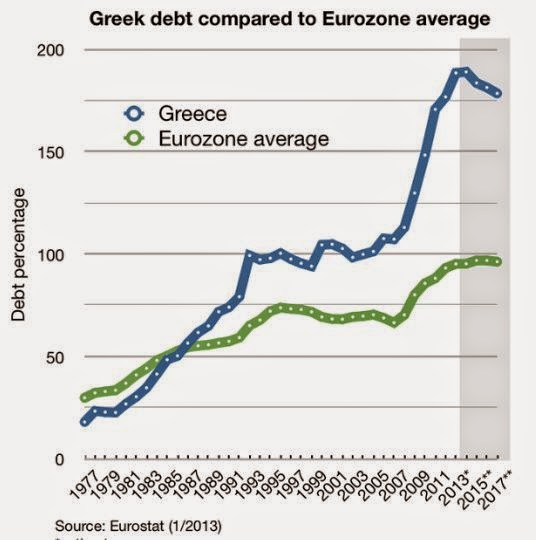 Greek versus overall Eurozone debt as a percentage of GDP from 1977 - 2012 with projects for 2013 - 2017.
This is a slightly out-of-date chart but the Greek percentage has only gone up despite five years of savage austerity in the form of massive government cut-backs, tax hikes, wage freezes, and a general upward and outward transfer of money. The decline is in the shaded region because the improvements are always "in the future" and "just around the corner."
*******


To be clear, a "primary surplus" is a surplus excluding interest payments to its creditors on its crushing and unpayable 320 billion euro debt. Also, to be even clearer, Greece is simply asking to limit that primary surplus figure to 1.5% of Greek GDP. 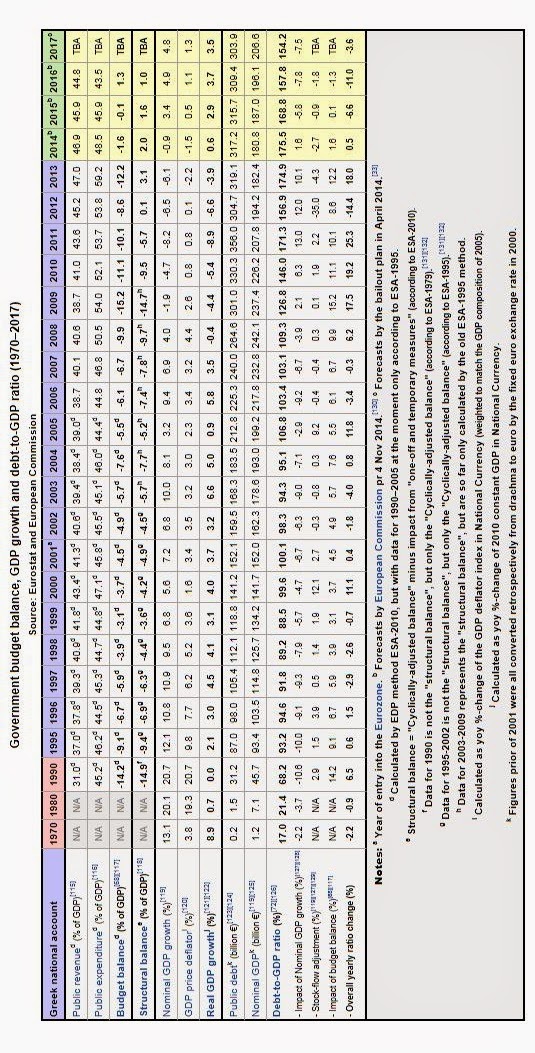 All the relevant numbers (from Eurostat and the European Commission) in one handy chart for the period 1970 - 2013 with projections for 2014 - 2017. (If interested, download this image, open it in Paint or some such graphical software program, and rotate it 90 degrees for a regular view.)
Nothing has gotten better in the past year.
*******


As it is, the actual percentage is almost irrelevant since Greece's economy is in depression with falling GDP and is setting off a death-spiral of ever-rising debt-to-GDP ratio that requires new rounds of austerity that further destroys the economy of Greece and destroys lives while enslaving its people. In response, much like the English absentee landlords of the Great Irish Potato Famine era, the amoral banksters institutions and their German political puppets then demand more austerity, more cuts, more destruction of lives in some sick and endless inverted morality play. 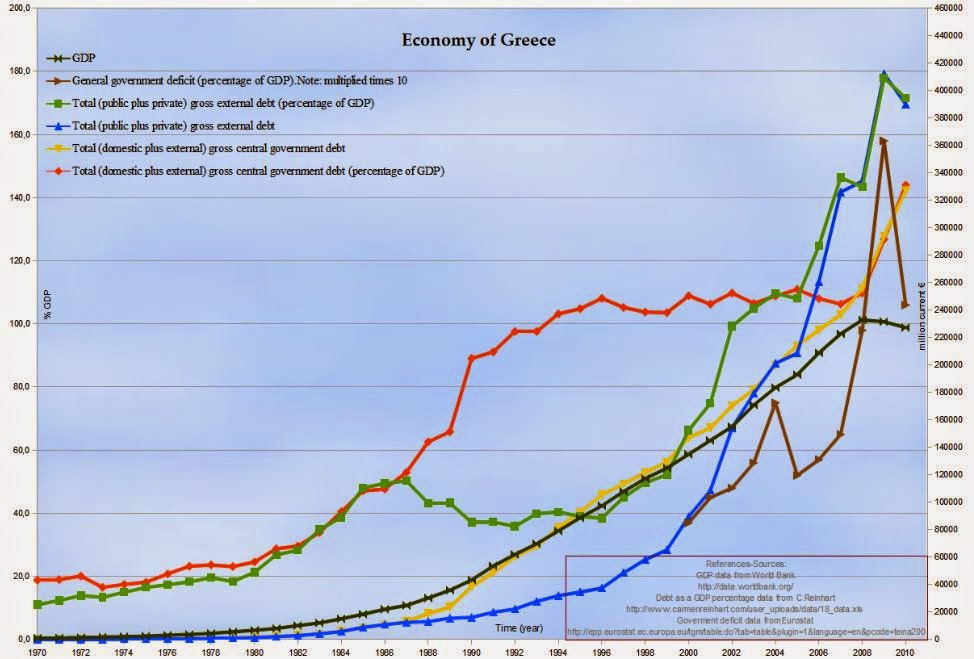 The Greek economy showing various debt ratios and amounts from 1970 - 2013. It's an ugly story -- but the savage austerity of the past 6 years has only exacerbated things. Click on image for larger version.
*******


For a certain type of American (which is to say, most of the uninformed and ALL rightwingers) this suffering is totally morally correct because debt and economics is a morality play in which there must be macroscale "atonement" and "suffering" for "sins of the fathers" and whatnot. (As for the kooky libertarian set, having wealth IS morality and those who don't have it should simply die.)
Of course, American Wall Street oligarchs peddle that shit (suitably concealed in black face) 24/7/365 to the Fox News / Talk Radio proletariat and petit-bourgeoisie set for their own deflation-loving, debt-shackling reasons while the former gobble it up like double bacon-wrapped cheeseburgers, super-sized McCheese fries, and 84-ounce Hyper-Gulps at the Daytona 500 Speedway concession stands. 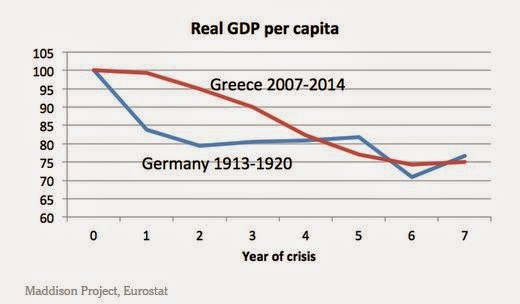 
As an aside, the irony here for me is that I expected better of the Europeans overall. My expectations for my fellow Americans has been rather low for a long time, and if there ARE good policy outcomes these days in the U.S., I chalk it up more to chance than design.
Back to the issue at hand ... Germany's motives (and possibly those of its debt collectors) are dark enough that Greece needs to realize with what it is dealing and break loose now. 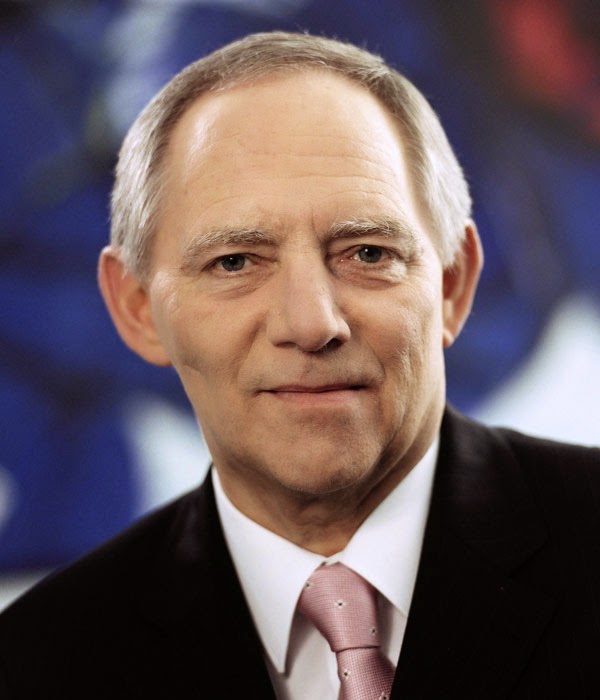 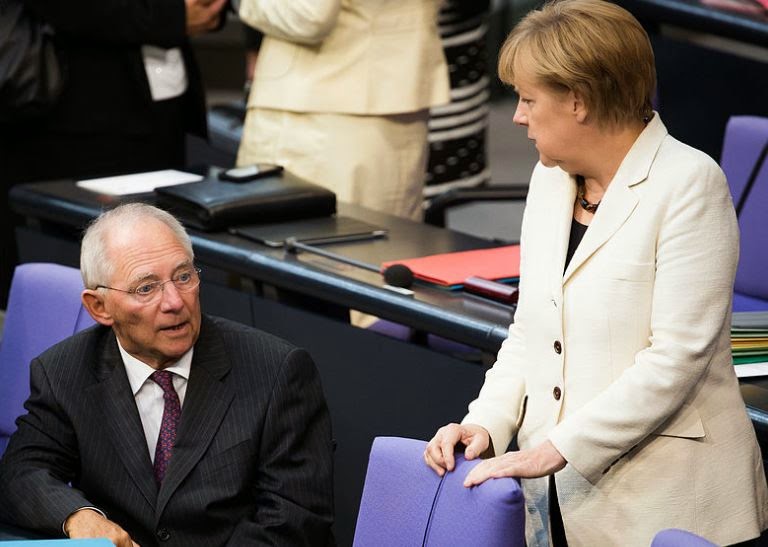 Of course, Schäuble is just side-kick of Hausfrau Angela Merkel, herself the puppet of German bankster oligarchs on their insatiable quest for destruction.
*******


Yes, there will be a Greek bank run and chaos -- it's too late for that and, besides, that's Germany's vengeful "backup plan" -- but the government should declare an emergency, nationalize the banks, reissue the drachma, and take all necessary steps. It should also ban every frickin' dealing with Germany and (to the extent possible) cut off all economic and financial relations with that country. It's better to do this now before turn truly 1930s ugly (a direction Europe in general seems to be going). 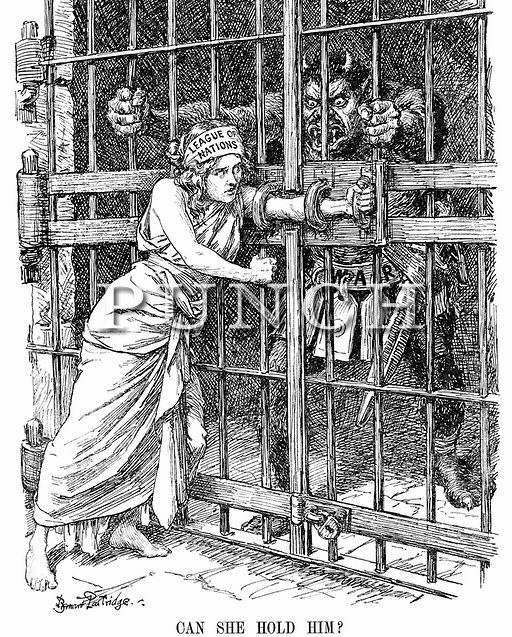 To be clear, we've all seen this Versailles Reparations and League of Nations double tragedy before and it can't and won't end at all well. All over Europe, a new fascism is breaking out precisely as we have a redo of the early 20th Century. (Here in the U.S., we are in some weird 19th Century economic and political time-warp, but let's save that topic for another entry.) 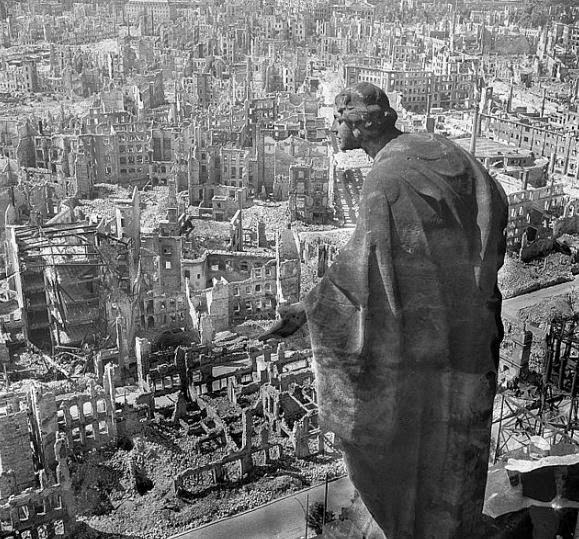 Of all people, it was frickin' George F. Will who put it well five years ago (though, naturally, for all the wrong different reasons):

"If money represents, as Emerson said, the prose of life, the euro reflects a determination to make European life prosaic. It is an attempt to erase nationalities and subsume politics in economics in order to escape from European history. The euro pleases dispirited people for whom European history is not Chartres and Shakespeare but the Holocaust and the Somme. The euro expresses cultural despair."

The man is an pseudo-intellectual fraud but (as is said) even a stopped clock is spot-on-precise twice a day.


Before I conclude, below are links to some important reads by Paul Krugman including one piece from his twice-weekly New York Times op-ed columns and four other recent ones from his New York Times-hosted blog: 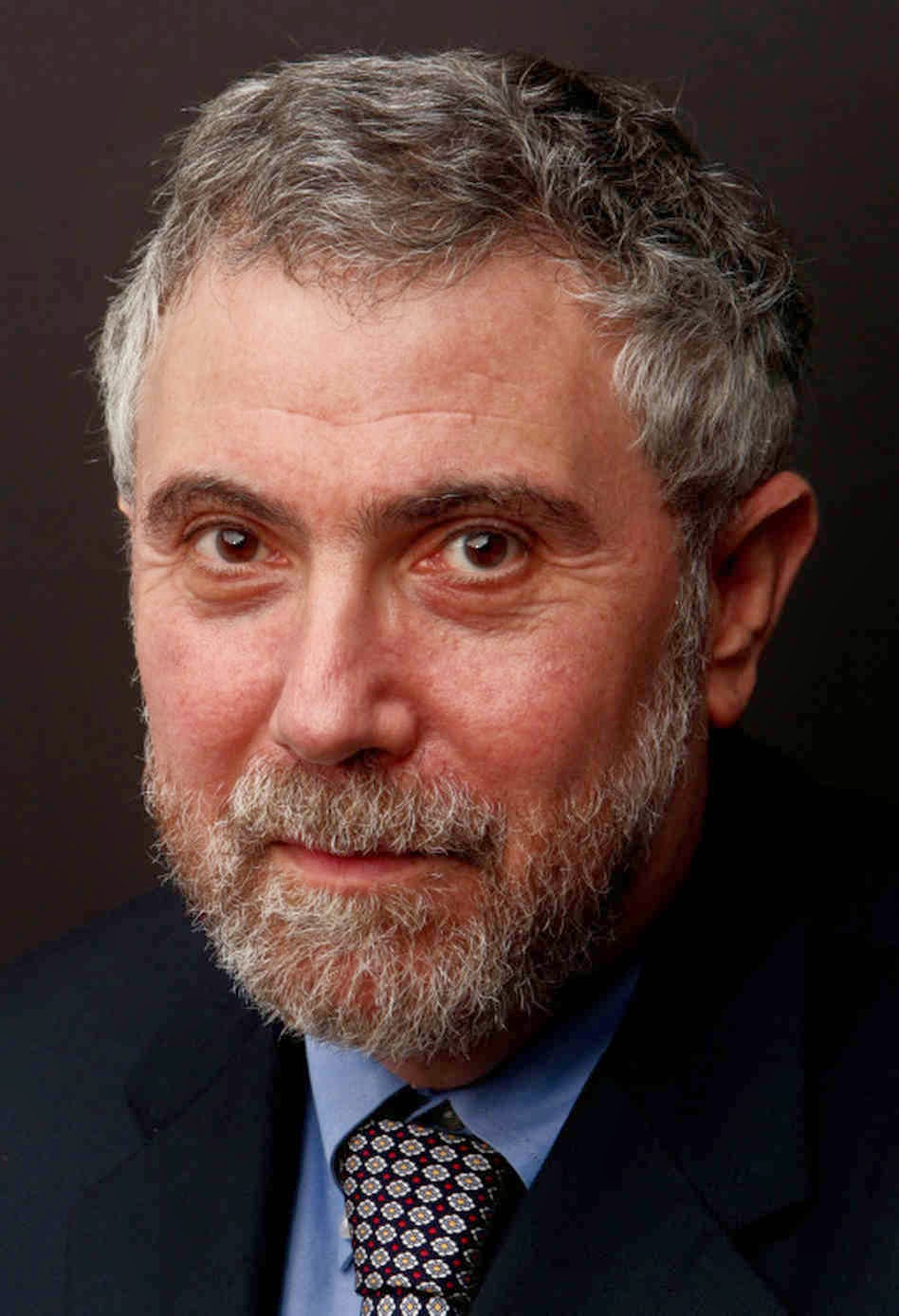 Weimer on the Aegean


If the euro cracks up and the entire European Union experiment crashes in the coming couple decades, it will have been the fault of Germany, it's banksters and government, and their ECB, EU, and IMF debt collectors.
Whatever happens, I suspect we are reaching a culmination in this particular crisis in the next few weeks to months. I don't know how it will play out. I thought France might step in but so far, it doesn't appear to be doing so. 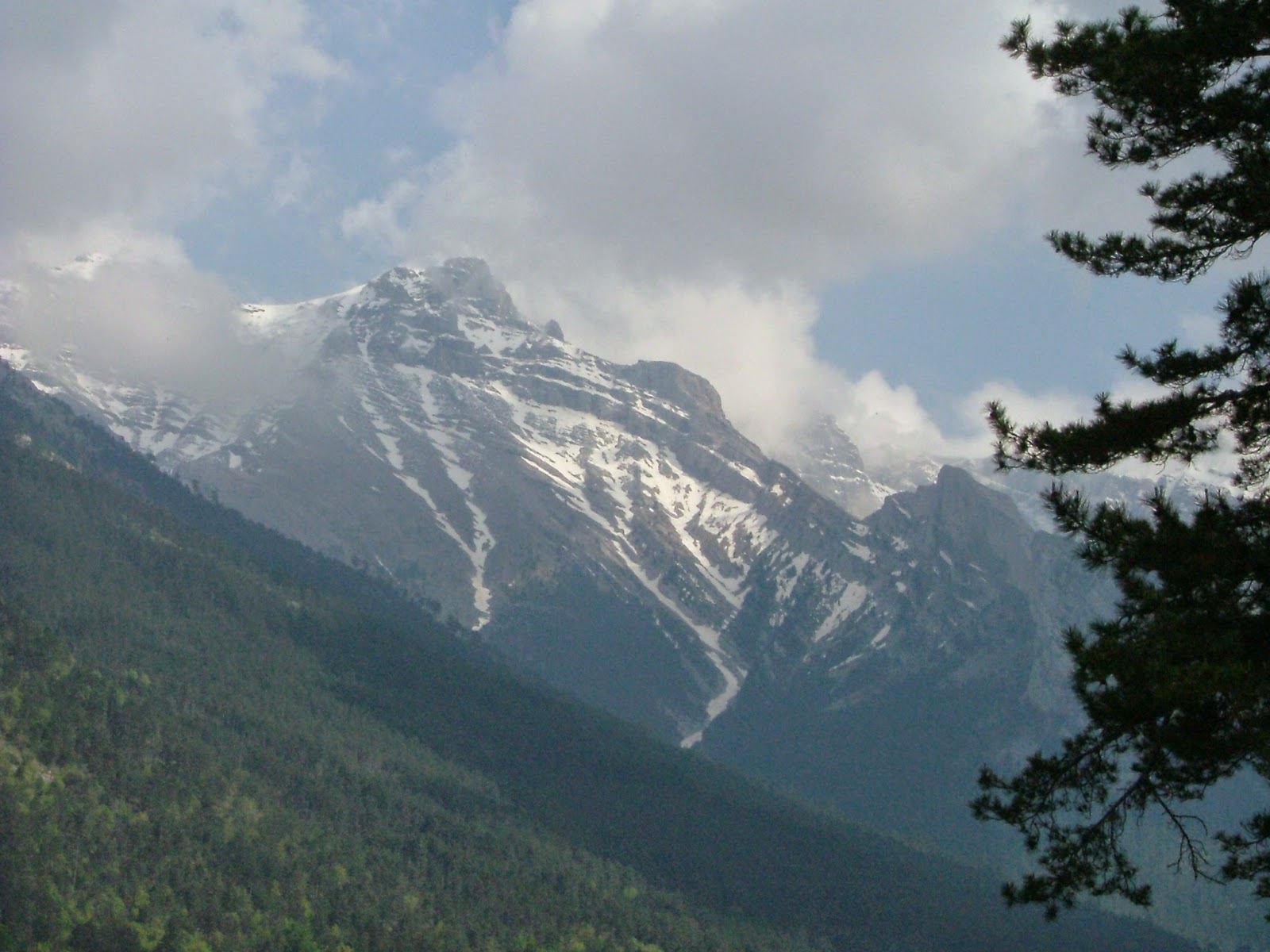 Hi there, (Please use your judgement re: posting this as it IS rather personal - you may also delete anything you choose)

I "met" you first via some great photos of Meridian Hill Park (which was a daily excursion for me in my pre-school years) you posted a while ago. I was setting up one of my Pinterest boards and wanted a good shot of the steps and fountain and Google led me to your's. I was born in Washington and lived there the first 13 years of my life - in the area of Columbia Road between 16th and 18th streets - and wherever the trolleys and busses took me from there :-)
Today, I am Pinning your great shot of the frozen Niagra Falls on https://www.pinterest.com/proofreadnz/water/

Time and tide have carried me far from DC, so I am now living and working online from a seaside community in New Zealand -- literally, the other side of the world.

I was further intrigued and moved to comment here because of your reference to the "banksters" - (I count Karen Hudes amongst my FaceBook friends) and am currently paying serious attention to many alternative possible future scenarios including Ubuntu Contributionism and the Thrive Movement as well as several active groups here in NZ.

I will definitely keep an eye on your blog to see what additional tidbits you come up with.

All best wishes and warm regards (to help ward off the COLD :-) )
https://www.facebook.com/judith.sansweet
(You can find me on LinkedIn as well)

I really appreciate your thoughtful comment. I didn't realize that you had come across my blog with the Meridian Hill Park pictures. I'm glad you liked them. As for the nearly frozen Niagara Falls one, that was one I came across on Yahoo. More proper credit should go the photographer, Lindsay DeDario. Her picture was picked up by Reuters and that's how Yahoo got it.

As for what I wrote in this entry, I was really just excerpting things that Paul Krugman has been saying. I thought it was useful to have an entry summarizing some recent op-eds and blog pieces that he has written.

I have to tell you that you live in the very place I most want to visit, if not live myself.

How did you get to New Zealand? How did that come about?