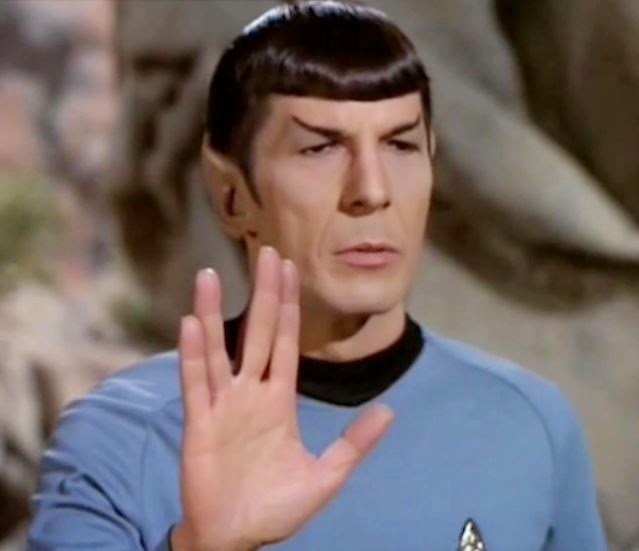 Live Long and Prosper. Indeed.
It is with real sadness that I note the passing of Leonard Nimoy at age 83 and some of the nice tributes that have been paid to him.
Nimoy was born in Boston on March 26, 1931. He passed away at his home on Feb. 27, 2015 in Bel Air, Calif., due to complications from chronic obstructive pulmonary disease.
In between those dates was an extraordinarily lived life with a tremendous positive impact on the world. 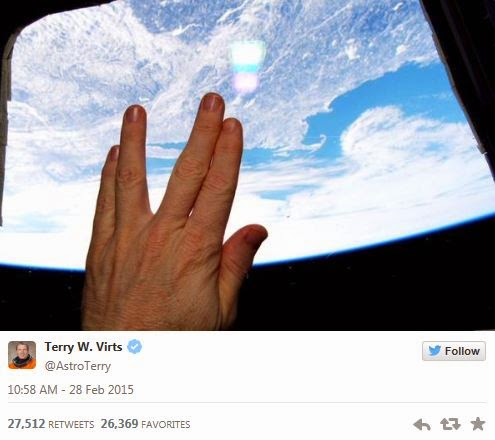 NASA astronaut Terry W. Virts aboard the International Space Station in low-Earth orbit makes the iconic Vulcan salute with Nimoy's home state of Massachusetts (and New England overall) visible below through a window.
*******


As it is, the character Mr. Spock that he gave the world through Star Trek and its many sequels, movies, and spin-offs, not to mention the overall tremendous cultural significance ("a juggernaut" is how it was described in the New York Times article linked above) will be with us forever. 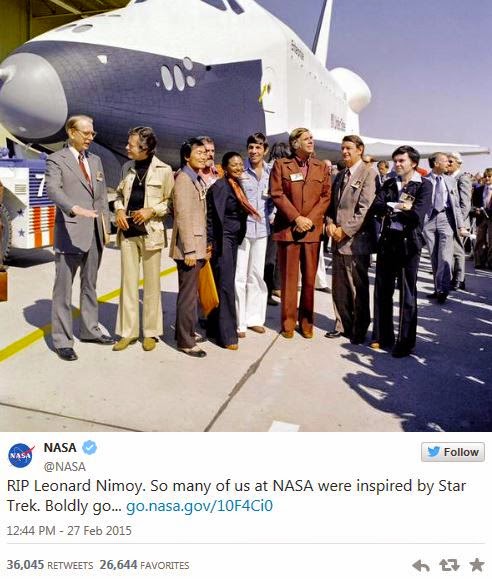 NASA tweet on the legacy of Leonard Nimoy along with a picture of Gene Roddenberry and most of the cast of Star Trek: The Original Series including Nimoy at the 1976 rollout of the Space Shuttle Enterprise (which was only used as a test vehicle).
*******


I'm quite exhausted tonight due to a combination of a good three-part gym workout, insufficient restful sleep from last night, and a lingering mild head cold with sore throat and occasional cough.
I'm finishing up a few loads of laundry now.
Last night after I got home from work, I went back out and met up with Andrea, Imara, Jake, and Nick in a manner that I have not in quite some time. We met at McClellan's Retreat and then went to Board Room on Connecticut Avenue and, finally, to Bier Baron (the old Brickskeller). Oh, yes, in between McClellan's Retreat and Board Room, the others went to Flippin' Pizza, but I ducked away and stopped at the bar at Bistro Bistro, where I had a mozzarella tomato dish and a glass of wine.
I left the group around 11PM and walked over to 17th Street thinking that Jamie might be happy to see him, but he totally was not and wanted no part of my company, so I left and headed over to No. 9, where I concluded the night before walking home.
Yes, I way over spent yesterday. Again.


I'm not sure what to do tonight. The calm, wintry cold, moonlit weather conditions are actually ideal -- not to mention the oddity of the month of February being 28 days and thus allowing the event to happen on the same night of the week, namely, Saturday -- for me to repeat what I did on Jan. 31st (i.e., four weeks ago tonight), namely, take my bike on the Metro to King Street, stop at for dinner at The Wharf, and then bike up the Mount Vernon trail back to D.C. by moonlight.

To be clear, this is because the Moon is in the same high-riding winter sky phase and the weather just happens to be the same (calm and mostly clear), and it's a Saturday night.
However, I'm not sure I want to do it again. I might just go to Trio and have dinner at the bar again. Or perhaps just Dupont Italian Kitchen.
Turning to the weather, there is some bogus winter weather advisory in place for tomorrow for an initial bout of snow, sleet, and freezing rain that is then forecasted to turn to plain rain by evening. The weather next week looks to be active with noticeable temperature swings. I'm sort of over this winter. Besides, all that and frickin' KDCA itself will still end up below normal on snowfall.
OK, my jukebox Saturday night entry is to follow.
--Regulus
Posted by Regulus at 9:26 PM