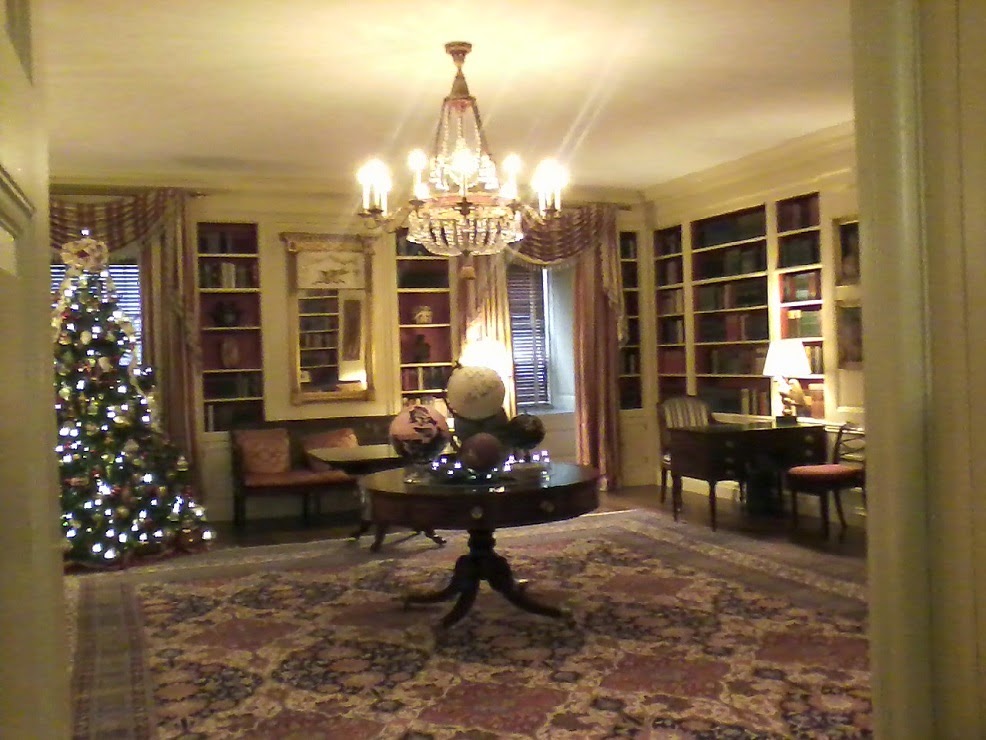 The pictures in this entry were from a White House Christmas tour I took with some friends (one of whom works there) and acquaintances back on Dec. 20th. I was meaning to post the pictures but never did. This is as good an opportunity as any to post them. However, they have nothing to do with the entry itself. Only three of them have captions. The rest are described by their file name.
I took a White House tour back in the mid-1990s (can't recall when) on the same East Wing side / half. I've yet to see the West Wing.
*******


I'm not exactly sure how to update this blog at this late hour when I have such a lengthy entry I really want to post of my New Jersey visit last weekend. I suspect it is going to have to wait until Sunday -- when I will literally have to dedicate 6 to 8 hours to it. 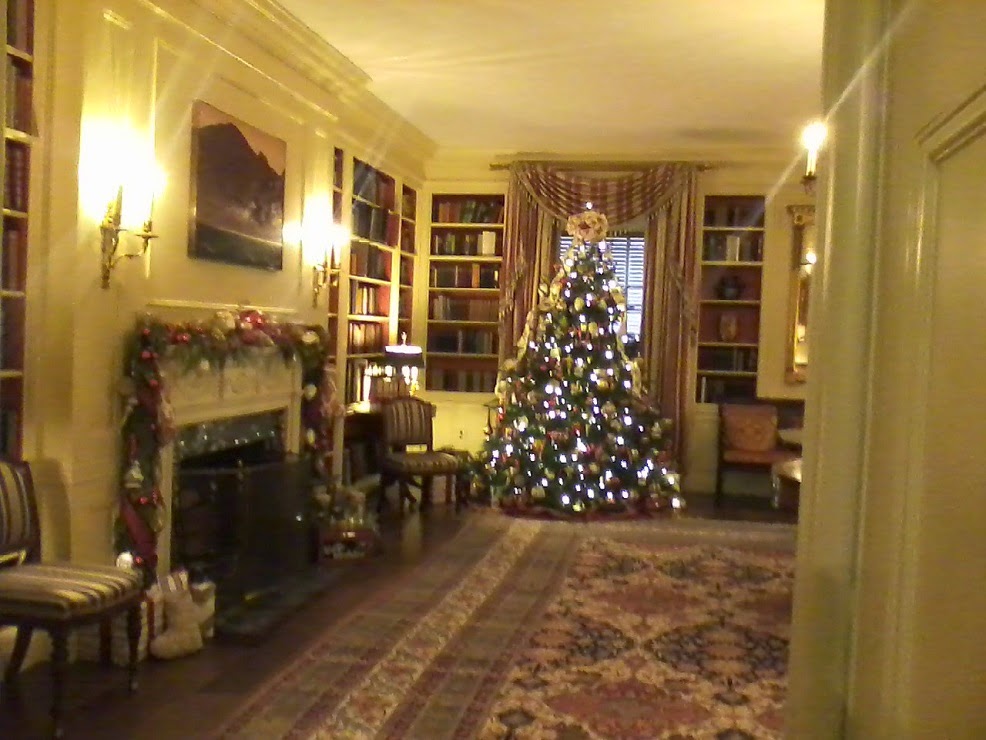 As it is, Sunday is the annual, endlessly annoying American spectacle of the Shitter-Bowl and all the crap that goes along with it -- and this year, compounded by the sense that the New England Patriots and Tom Brady, in particular, just cheat via deflating their footballs. I loathe American football, especially at the professional level. 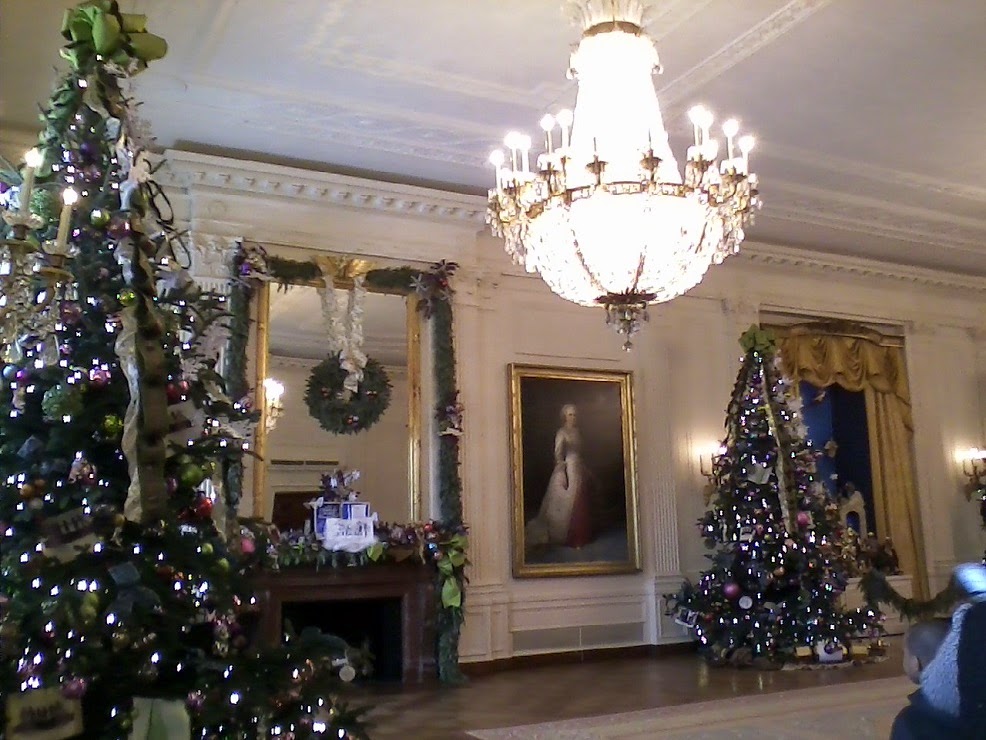 As a result, I will be avoiding the American Shitter-Bowl like the plague, so I guess that means staying home and avoiding everywhere out, which should enable me to post the aforementioned entry. I'm just not available Sunday.
BTW, Chris H. named that little angel of a dog, Brady, for Tom Brady because he (Chris H) is such an intense Patriots fan. (It's probably a good thing that he and I aren't talking now since he's likely to be bouncing off the walls over the whole "deflate-gate" thing.) 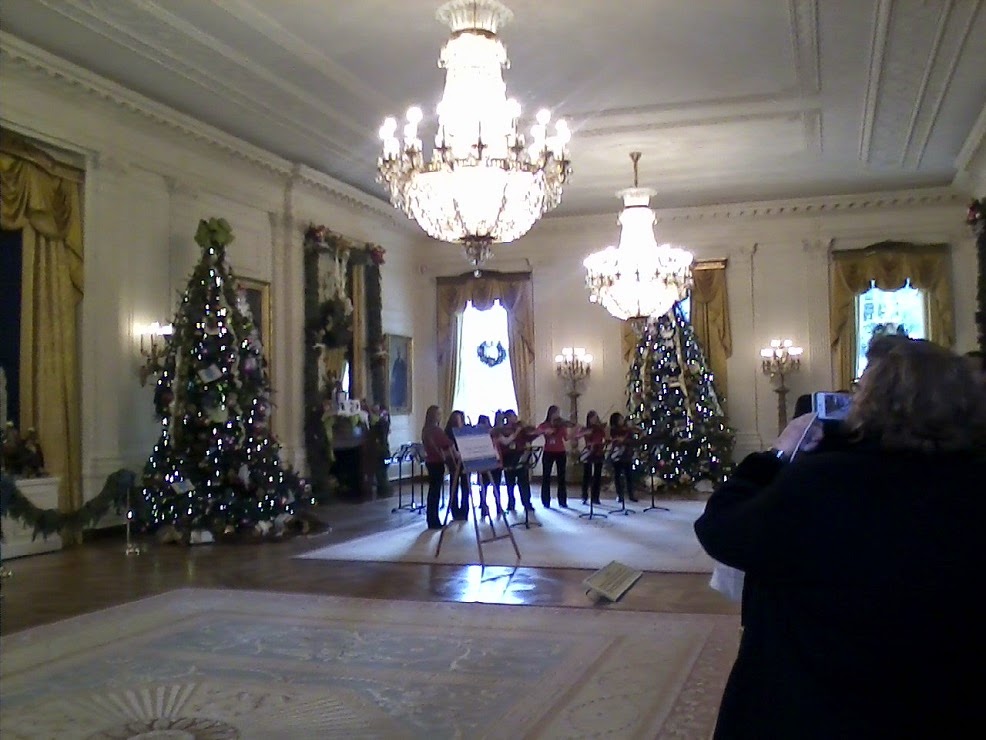 Weather-wise, there is (was) supposed to be what looked like a 4 to 8 inch snow "event" for the Baltimore/Washington area late Sunday into Monday but the 0Z operational runs of the NAM and GFS both track the low overhead and have much of the event taking place in the form of rain. The idea of a changeover back to snow is just not physically very realistic in this particular area. The weather doesn't work that way here. 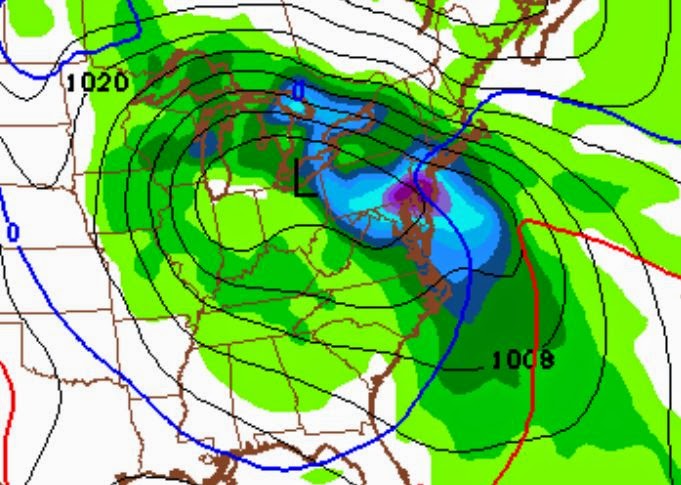 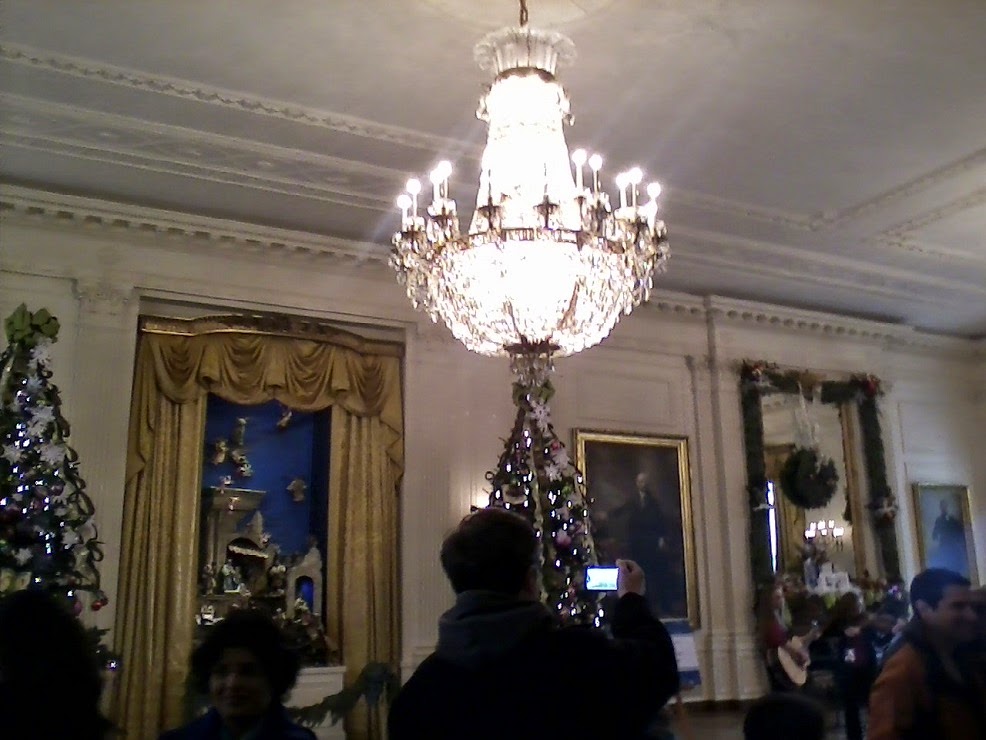 I had a good gym workout tonight but the music situation at the Anthony Bowen YMCA is just out of control, and I really am at my wit's end as to what to do. Short of returning to the National Capital YMCA, which is less convenient and just less nice (except for its much bigger pool), I don't know what to do. Repeated efforts to raise the issue have been ignored including an email to the top manager there. I might just have to contact the YMCA of Metropolitan Washington itself to alert it to this issue. 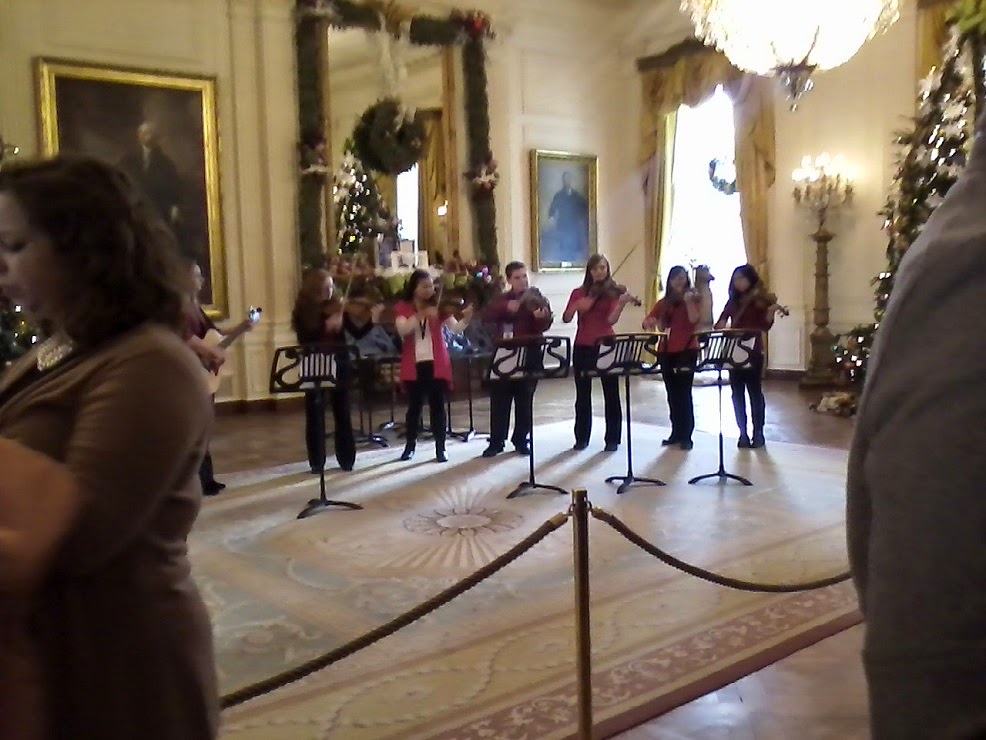 It basically comes down to one or two personal trainers -- indeed, I think it's just one in particular -- who plays this industrial house music from the "SHREDZ" Workout Mix by some guy named Naveen Kumar. It's just intolerable because it loops endlessly with the same few hours of music, and I'm on the main workout floor for about 2 hours 15 minutes in all. I just don't know what to do. I suppose I could get my own music and ear buds with my Smartphone, which I now have (through work). 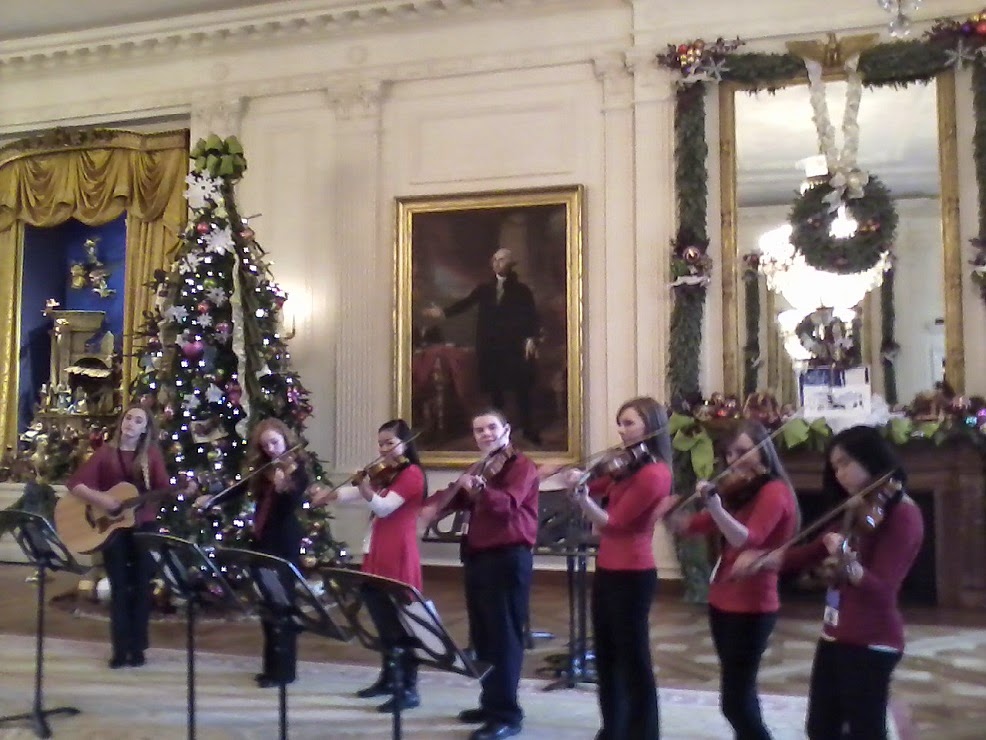 I can't recall the name of this band but it was "Ozark" something or other. Behind them is the White House portrait of George Washington. I thought that was the actual Lansdowne portrait by Gilbert Stuart, but instead it is apparently a copy with the original in the National Portrait Gallery (the place that gives the name "Gallery" in Gallery Place - Chinatown Metro stop).
*******


There are two links I would like to post in this entry.
The first one by Jonathan Chait (link embedded): Not a Very P.C. Thing to Say.
It has been causing quite a ruckus among (social) liberals on social media and on college campuses everywhere with paroxysms of rage directed at him. He argues that the stifling ideology of political correctness that has flared again is actually quite illiberal, not to mention that it is producing the usual theatre-of-the-absurd outcomes. 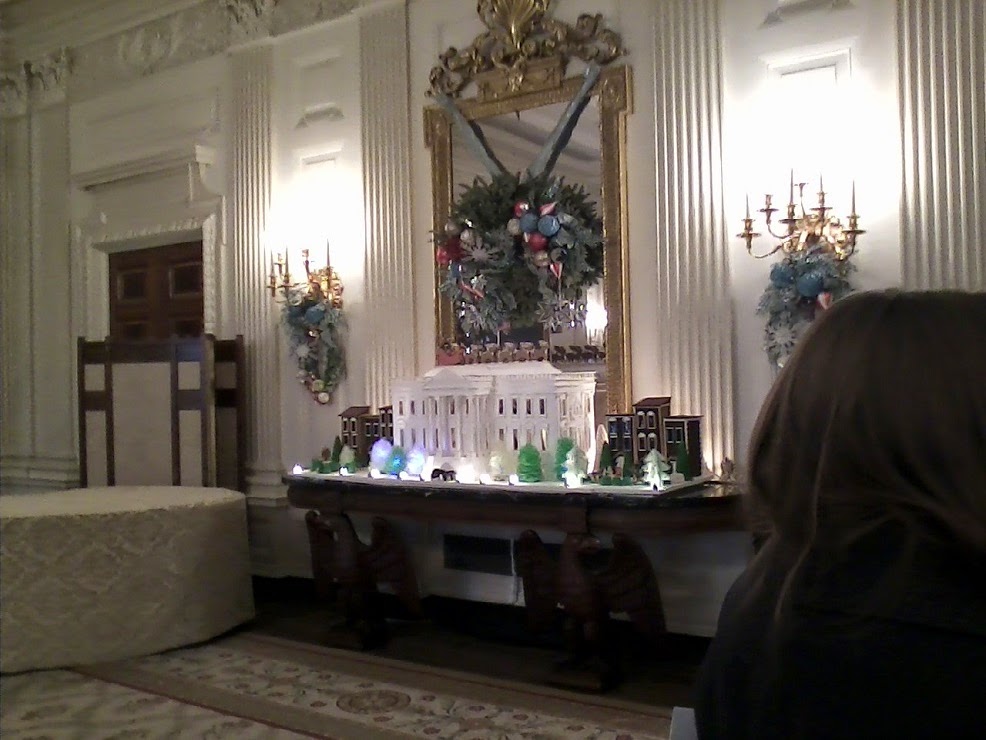 The general view -- best represented by the Vox.com site under noted D.C. limousine liberal pundit Ezra Klein -- is that there is no such thing as political correctness because, by definition, anyone historically oppressed (read: people of color and especially women of color) could never, ever, ever be in a position be oppressive. In other words, it is a definitionally nonsensical proposition to them. 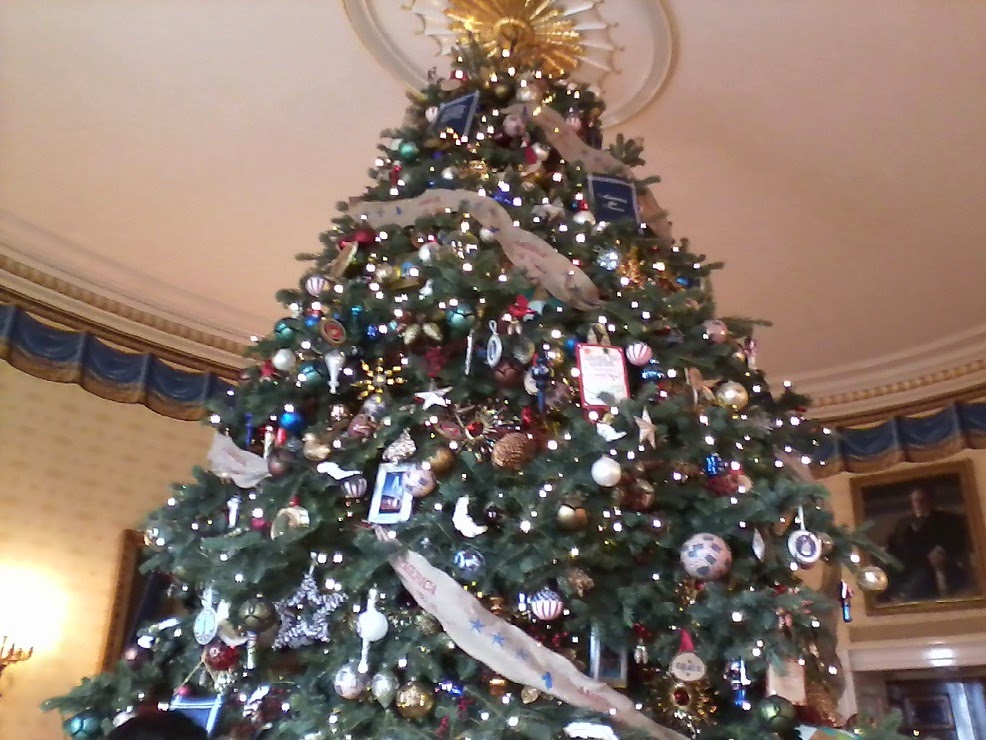 Others cite the standard list of historical perfidies of white men up to and including slavery and genocide (actually, those are the first two things mentioned), which apparently are coded into the DNA of all white American males to commit. 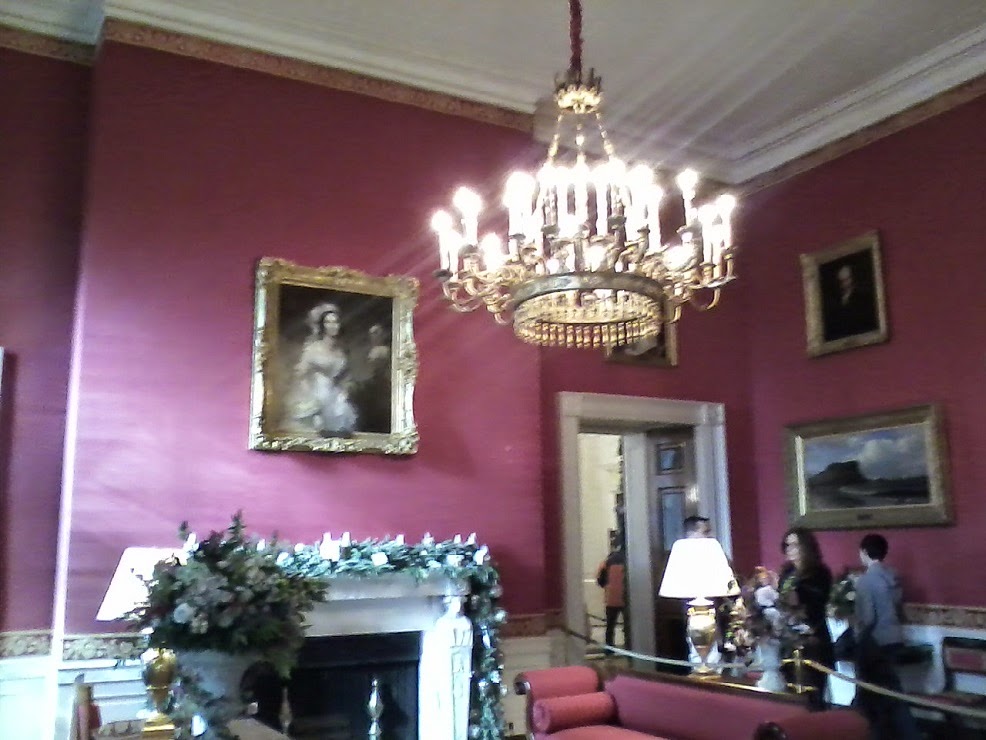 For this reason, white men are not permitted by this crowd to talk on any of these topics unless their view is completely aligned with that of Melissa Harris-Perry (or maybe Al Sharpton) and rage erupts if they do. (Even if you agree, you still can get a blast of verbally violent rage directed at you as happened to me years ago in Rehoboth Beach at a Wall-P summer holiday vacation.) 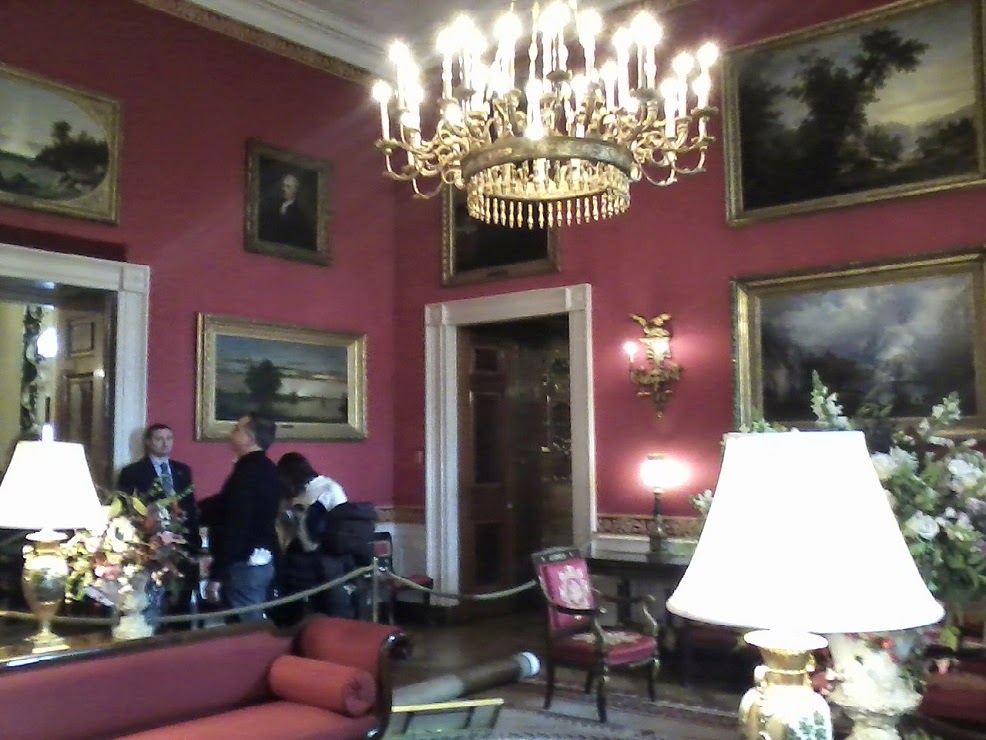 They are (I am) inherently, fundamentally, existentially, and forever the source of all that is wrong with the world even today, and to say anything contrary to that is to prove the very point.
The more nuanced view is that this PC mindset is working precisely because it makes white men feel uncomfortable, which, ipso facto, shows that this approach is "working" as intended. 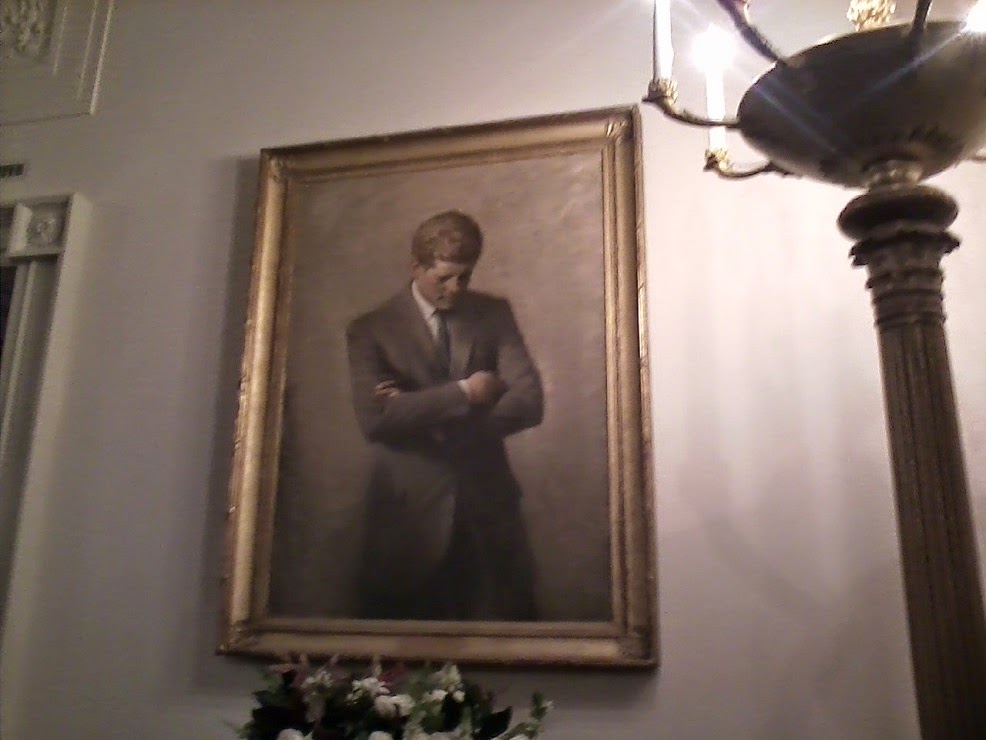 Chait also makes the important point that while the conservative right in America has disproportionate political power (via the structure Senate and the current configuration of the House), this liberal-left (as opposed to Socialist left, which is negligible in America) has tremendous ideological power through social media and academia. 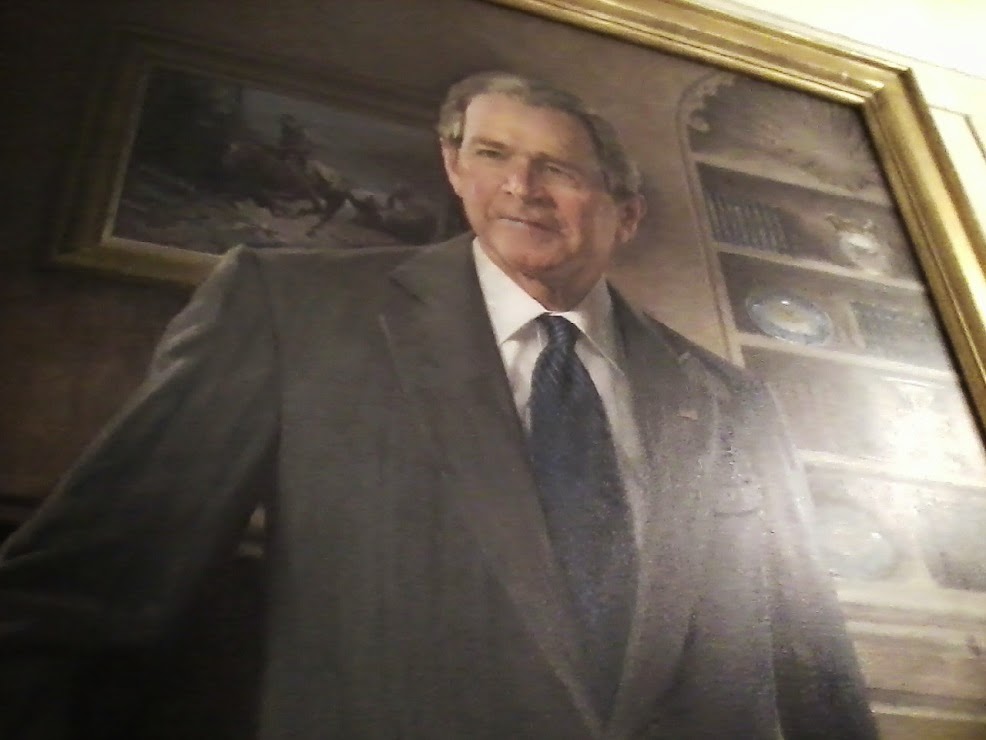 Yes, George W. Bush's official White House portrait -- and, yes, I had a slight argument with one of the people in my group about him and his legacy. Actually, this person is a highly argumentative individual and does so in what I consider to be an ugly way, and at this point, I want nothing more to do with him.
******* 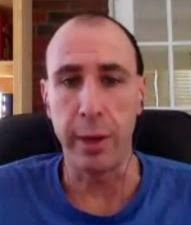 Chait wrote a great response to his many leftwing critics -- most of whom never address anything he said but simply invent, whole cloth, his "real" views and even quotes that aren't in the article. As for Vox.com's Amanda Taub, she just rejects that political correctness exists because to her it is a self-negating proposition.


Anyway, here is the response (link embedded): Secret Confessions of the Anti-Anti-P.C. Movement.
Oh, and here is a great interview with him on HuffPost Live in an interview with Caroline Modarressy-Tehrani. (Speaking of great, what a great name and great voice.)
Glenn Greenwald should stick to what he does best - bashing the military-industrial-surveillance-terror mongering state. Alex Pareene is just worthless. Lastly, the picture I posted of Chait is taken from the HuffPost Live interview. Chait looks like he has lost about 50 pounds.
End of Update.


The second article is from the WaHoPo, and it is about all the fracking-induced "micro" and not-so-micro earthquakes in Oklahoma due to all the hydraulic fracturing ("fracking") of oil and natural gas. Specifically, the resulting billions of gallons of toxic brine that is hydraulically injected each year via 3,300 or so disposal wells into subsurface formations is causing nearly non-stop swarms of earthquakes. They're mostly small but occasionally noticeable and even once-in-a-while large enough to cause damage (including a 5.6 one in Prague, Oklahoma on Nov. 5, 2011). 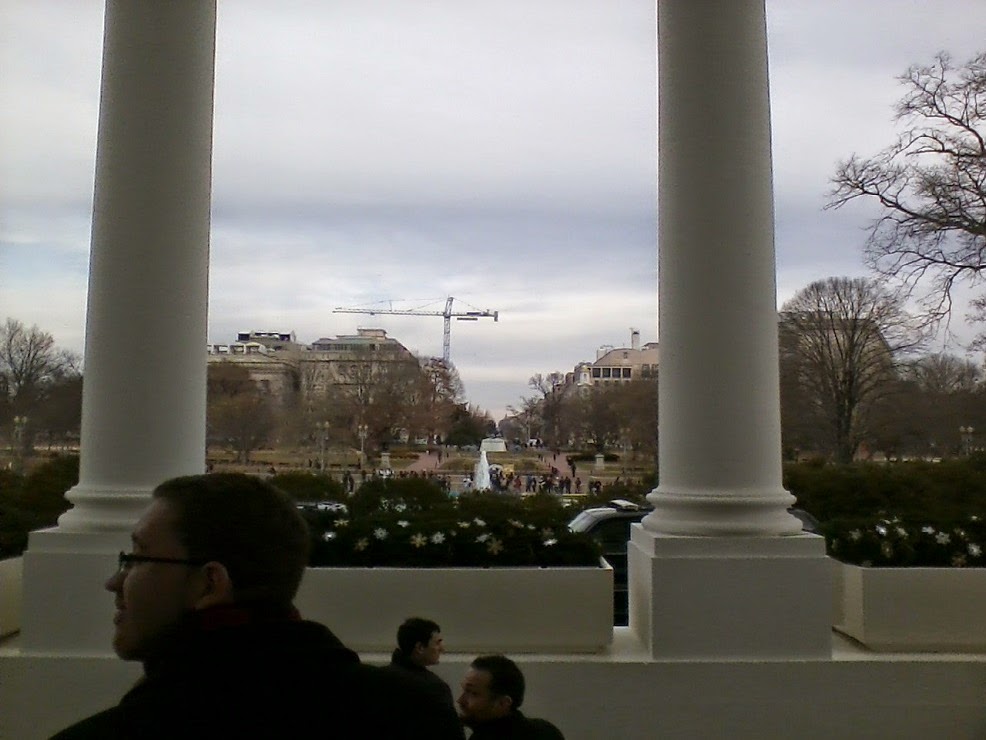 I took this picture just seconds before a uniformed Secret Service guy barked at me that no pictures were allowed there. However, I'm glad I got this picture: It is the view from the north entrance of the White House looking north across Lafayette Park and up 16th Street. I actually live just a touch over 1 mile north of this spot -- you can actually see to U Street itself. I find this such an odd thought given how different is the reality for those in the White House and for me in my little dusty apartment.
*******


Gov. Mary Fallin has decided to bury the matter for her oil and natural gas cronies by appointing a "commission" to "study" the issue. For her and them, these earthquakes are a good thing because of freedom or something. To be clear, there is absolutely nothing to "study" -- the science behind induced seismicity is well-understood and has been for decades. Only a Know Knowing Teabagger or bought-and-paid-for oil and natural gas extraction industry whore would say otherwise. 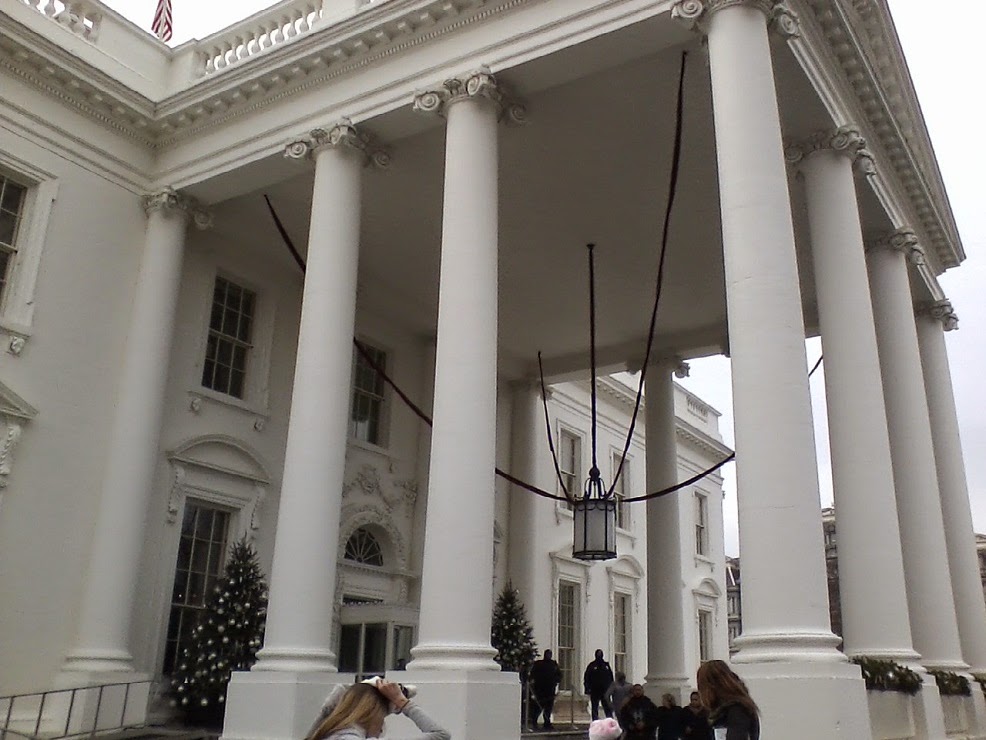 As for Gov. Mary Fallin, her main focus is, as ever, on endless executions of mentally ill people -- ideally, black and poor -- using whatever cocktail of drugs her security goons purchased at midnight in the parking lot behind this or Walmart around Oklahoma City and mixed together, Josef Mengele-style, to see what happens. That's how they "roll" in that part of the country.
OK, that's all for now. My next update will likely be on Saturday with a jukebox Saturday night entry.
--Regulus
Posted by Regulus at 2:00 AM