The First Snowfall of 2015 in Washington, D.C., the City of God and of the Father 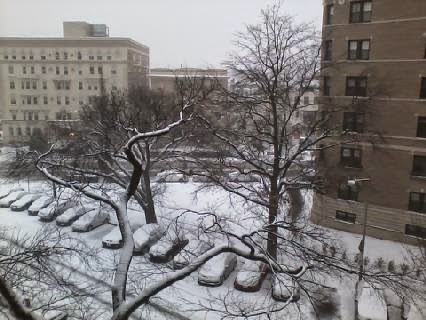 
The first significantly accumulating snowfall of the 2014 - 2015 winter season is underway across the Metro Washington, D.C., area on this January 6th, 2015. It is definitely the first measurable snow at the always-problematic "official" D.C. spot of Reagan Washington National Airport climate station (KDCA). Indeed, there was 0.8 inches at KDCA as of 7AM so it should have clicked over that unimportant yet for some reason symbolic 1-inch mark. 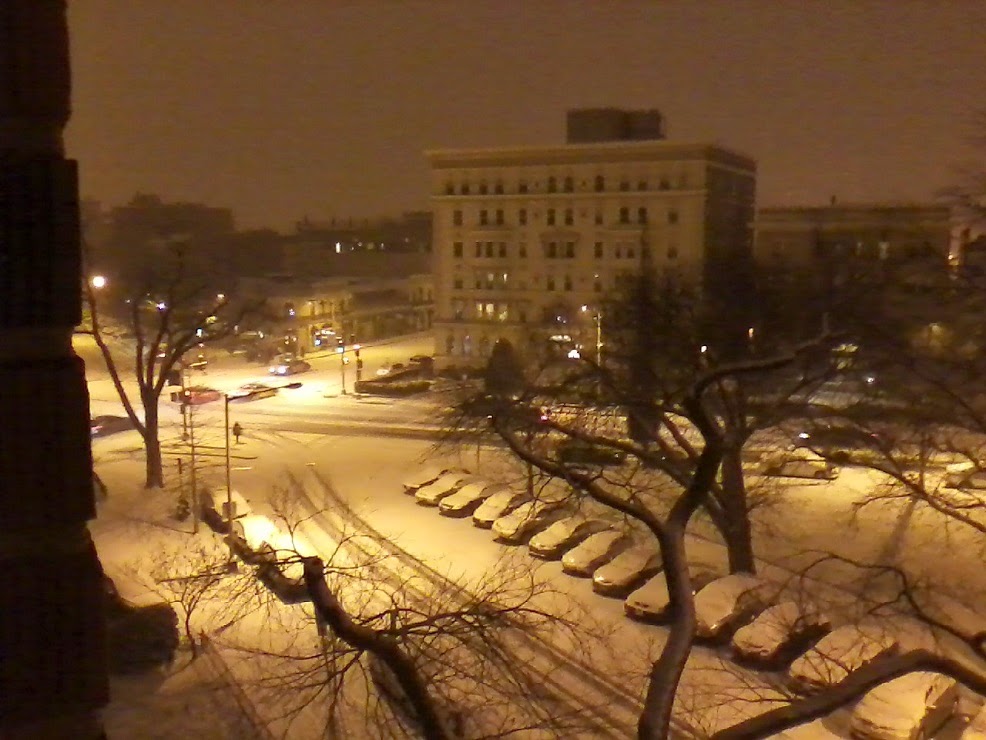 
Looking outside from my 5th floor "midtown" D.C. apartment window by 16th and U Streets NW, there appears to be at least 1 inch of snow on the ground. It is snowing moderately at this point (8:20AM) with visibility about a half a mile in snow and fog. The air temp is 24F at KDCA at the 8AM hour.
The Capital Weather Gang most recent entry is here. It includes various photos on social media.
A winter weather advisory is in effect for nearly all of Maryland (except St. Mary's County and the lower Eastern Shore counties) and much of northern Virginia as a strong clipper system swings through on a 150 to 175-knot 300-mb northwesterly jet streak. 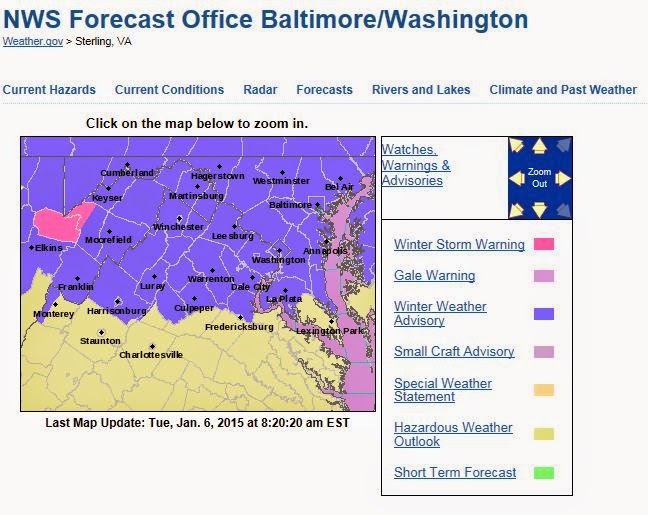 
The real core of the Arctic air is forecasted to move into the region tonight and remain in place for about two to three days with highs tomorrow only around 27F and 21F on Thursday and morning lows around 11F even in the District before moderating by Friday. With the snow cover, it is now certain to be quite cold -- probably near 0F along the Allegheny Front and Potomac Highlands on Thursday morning. 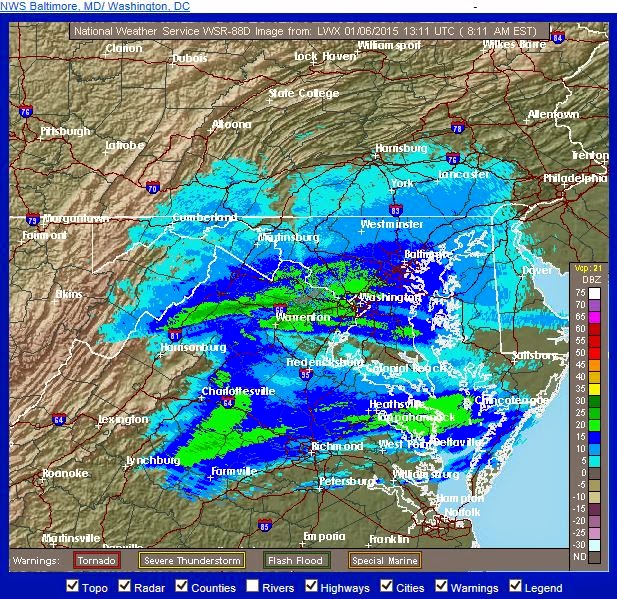 
The radar still shows a few more hours of snowfall. There is also a convective band trying to set up over D.C. and its western suburbs that should last for a half hour or so. 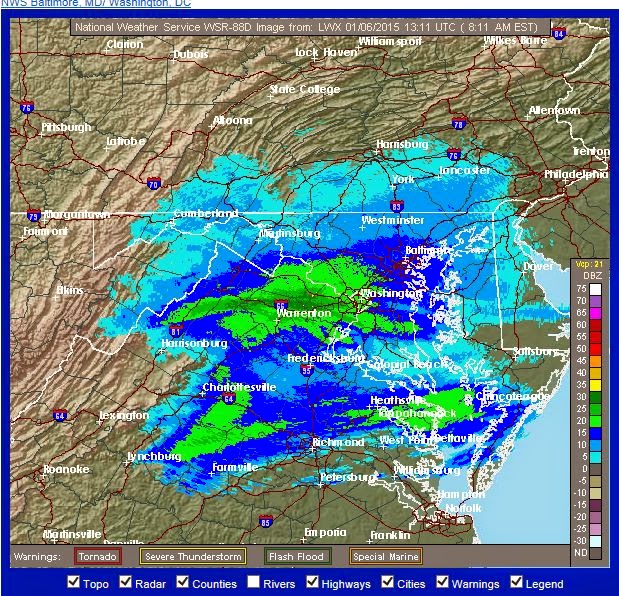 The Sterling (LWX) NWS radar in enhanced composite mode at 8:11AM EST January 6, 2015.
This shows the more convective bands of snow setting up over the District and into Fairfax and Fauquier Counties, Virginia. This is a classic clipper system with heavier snow banding.
*******


So yesterday's snow fall totals at the four main regional climate stations were as follows along with the seasonal totals in parentheses: 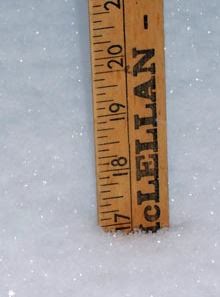 KDMH: Could not find a reported total


I need to get ready to go to work. Also, there is the umpteenth water turn off for the building scheduled to start at 930AM and last up to six hours, this time the hot water. (I'm not sure if that means the hot water tap goes out entirely or the water just comes out cold.)
I would like to update the blog tonight, if only to discuss the ugly issue with my father, specifically, one of our worst arguments ever on the phone last night -- when I called to tell him about Aunt Babe passing away -- as a result of the Shannon situation. I was so infuriated by what he said, I told him to f-off and to get out of my life and hung up the phone. He was shrieking and screaming at that point.
The view yesterday ... 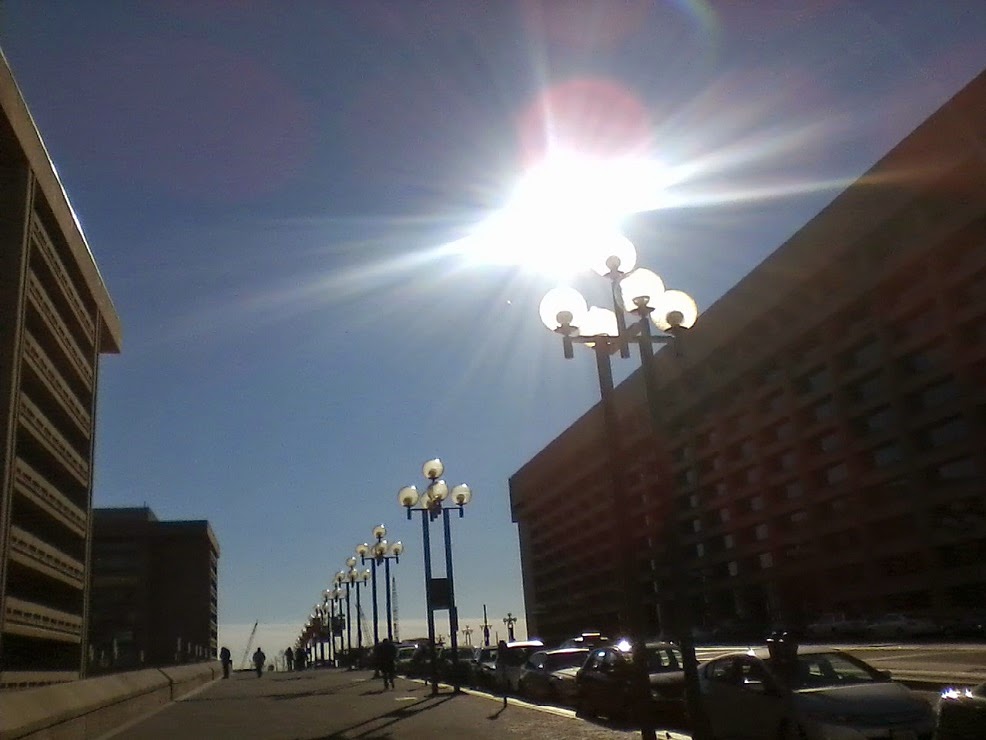 
Shannon remains in jail because no one wants to bail her out because, well, no one wants her around or cares. She is truly a hated figure, even among the social wreckage that are her peers in Flagler County.
Yet my dad -- yet again the victim of her alcohol and pills-exacerbated violent bipolar outbursts -- is itching to bail her out, which would be the exact wrong course of action. Furthermore, he is scheming ways to do this even as he is supposed to talk to the local state attorney tomorrow who is bringing the case against her.
I actually am scheduled to talk to this state attorney myself (she is out of the Bunnell office). My dad's actions are putting me in a very difficult situation. 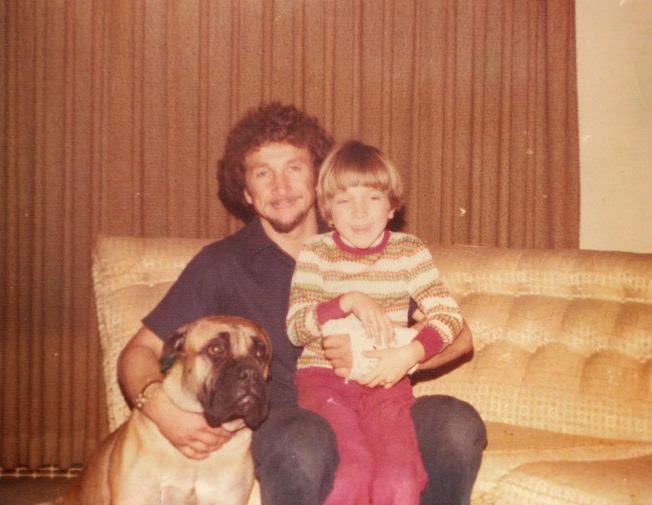 
As for my dad, now almost 74 years old, I can't reach him anymore. He's too far gone in his narcissistic, practically sociopathic state exacerbated by a brain ruined by years of substance abuse. I may never see him again.
The snow is pretty as it falls outside my window.
OK, let's get this day started.