A Tragi-Comedic Interlude: YouTube Clip and Synopsis of "The Family" Skit Episode "The Attic" from The Carol Burnett Show 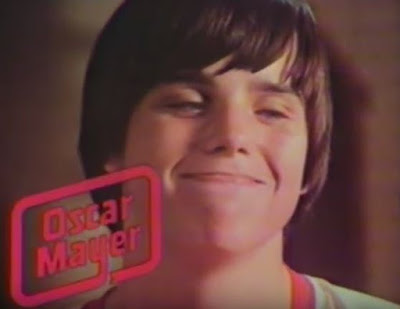 Yeah, this kid. I wonder what ever happened to him.
By the way, I think one of the Wool-Lite ad women is actress Erin Gray (the lady on the right in blue) … 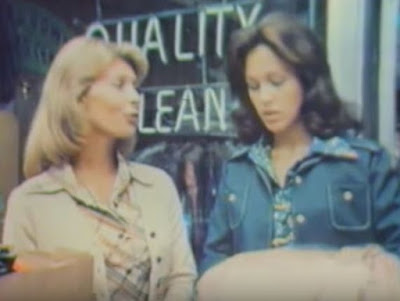 
This is one of the skits from the old Carol Burnett Show called "The Family" that featured Carol Burnett as Eunice Higgins, Vicki Lawrence (or Vicki Lawrence Schultz) originally simply as "Mama" but later as Thelma Harper, and Harvey Korman as Ed Higgins. This skit also included Betty White who was guest starring on this episode as Eunice's older sister, Ellen. 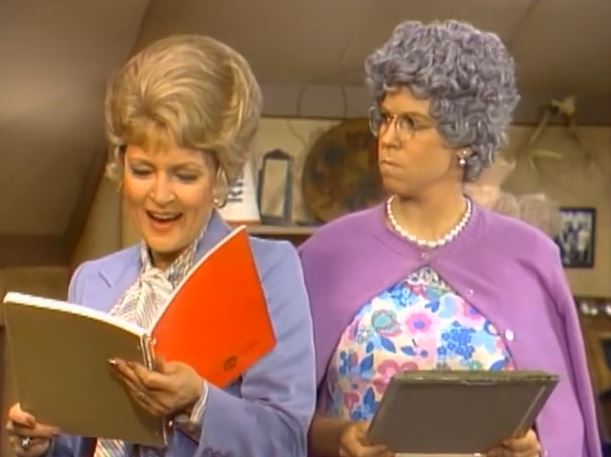 In this skit, Eunice and Ed are helping Mama clean out her attic with stuff that belonged to a deceased relative identified only as Aunt Mae.
The episode is hilarious as Mama -- who far prefers Ellen to Eunice -- gives to the former both a Tiffany lamp shade and a box of expensive china that they come across over Eunice's angry objections. (Were I still talking to the Confederate Bell, I would tell him about this episode.) 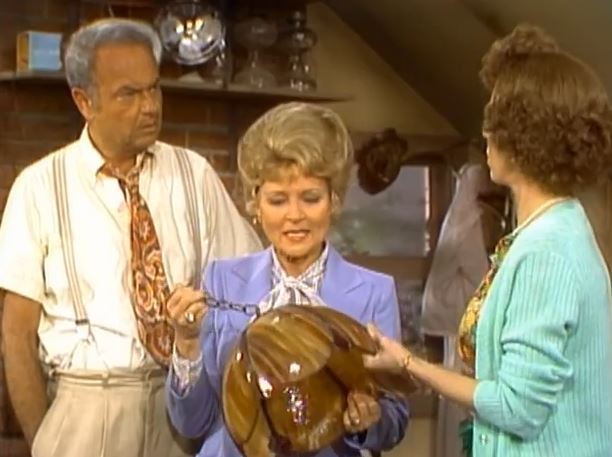 Mama: "Stop all this silly fussin'! I give the lamp to Ellen, it's the way your Aunt Mae woulda wanted it so that's that!"
Eunice: "Aunt Mae woulda wanted it that way?? Aunt Mae?? How do ya know what hell she would?? What's she doing? Is she up here HOOOOVERIN' around the attic like Casper the Ghost tellin' you, whisperin' in your ear that Ellen gets it??" 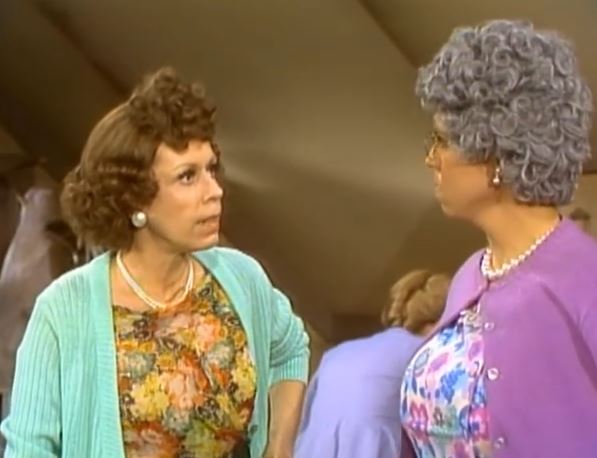 I love Eunice's line: "You SAILIN' off with that chaaina, too??"
A fight ensues in which Eunice ridicules Ellen's expensive with following wonderful description:
Eunice: "Now you just lay off of our house! We all know we live in a dump!" 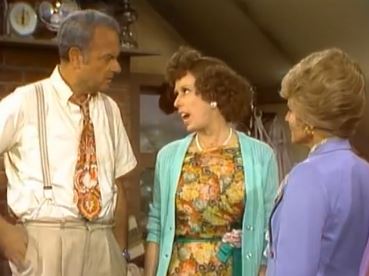 Eunice: "Would you just SHUT UP!" [Turning back to Ellen] "But I'm here to tell you raaight now that the world is sick and tired of hearin' you go on and on about that two story job that you live in with its built-in stoves, and its slidin' door closets, and its step-down den, and it's DOUBLE TOILET PAPER DISPENSER! I mean, the world would think you lived in the Taj Mahal instead of a TWO-BIT TRACT HOUSE in a SNOOTY PART of a HICK TOWN!"
FYI: The town was identified in both the skit and later in Mama's Family as "Raytown" -- but only later was Raytown, Missouri suggested as the setting (and never in the skit or show). 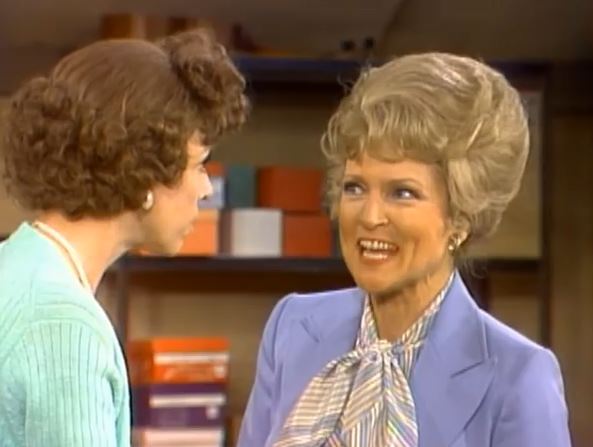 It's at that point that the episode turns really dark as the fight escalates and Ellen reveals that Eunice's beloved bunny rabbit "Fluffy" didn't run away but was killed by Mama and served as dinner that Eunice also ate:
"Well, let me tell you something, Eunice, I think it's time you know. You remember that Friday that Fluffy the rabbit disappeared? Well, toots, that wasn't fraiiiyed chicken we had for supper that night!" 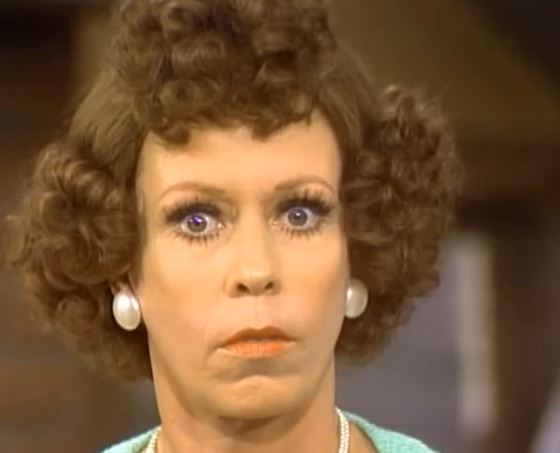 Eunice's reaction to the realization her mother had killed her childhood pet bunny rabbit "Fluffy" and served it for dinner.
******* 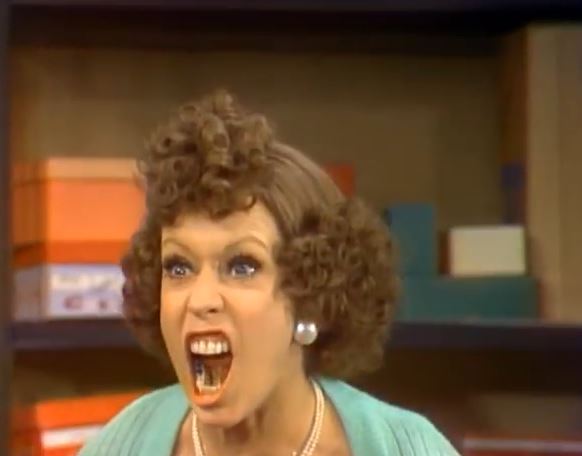 "MURDERERS!"
Eunice's response -- to destroy the Tiffany lamp shade AND the expensive china dishware -- is hilarious and morally satisfying. Oh, and to his credit, Ed comes strongly to Eunice's defense while Mama is just amoral. 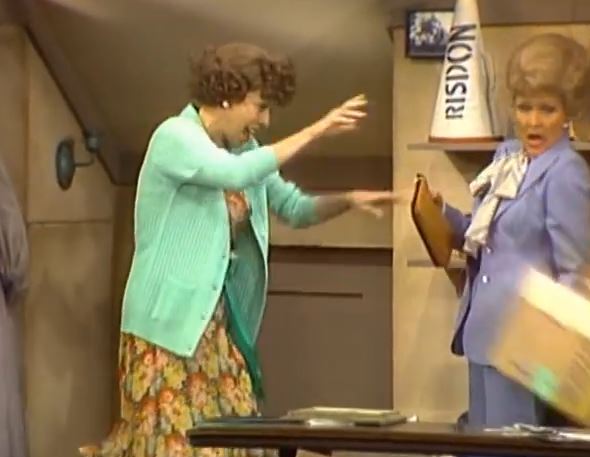 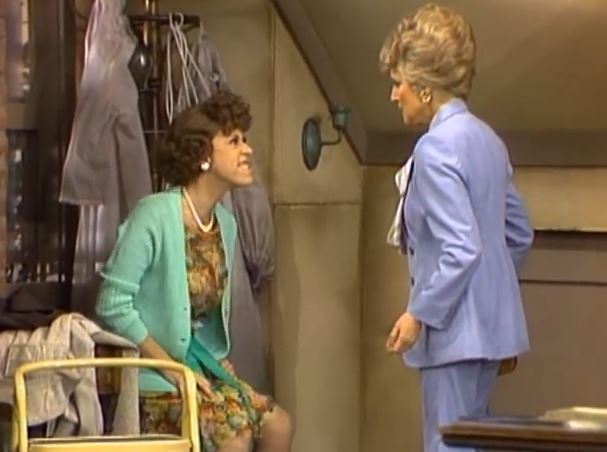 "But one lucky thing - you still got ya china here!" [Sound of boxed china shattering]
Eunice's expression while butt crushing the boxed china is awesome and hilarious.
*******


This skit aired December 11, 1976 (shortly after my 7th birthday when I was living in Long Branch, N.J., with my dad and grandparents).
"The Family" was the basis, of course, for the series Mama's Family with its two distinct incarnations, the second one of which did not involve Carol Burnett at all owing to real-life problems with the producer and her ex-husband (Joe Hamilton) and featured a much sweeter, wiser, and decent character of "Mama" Thelma Harper. The one in "The Family" was aggressive, easily irritated, a borderline invalid in a few instances, and outright hateful toward Eunice and Ed. (There was also a 1982 movie called "Eunice".) 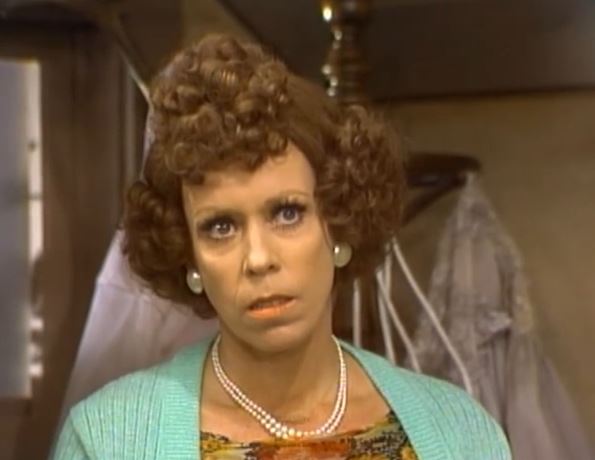 
"The Family" was hilarious but also deeply tragic in a Southern Gothic way, and although I am anything but a Southerner, I very much related to the screaming fights and found it as a child hilarious precisely for that reason. It WAS my own family in a slightly different but quite recognizable context.
Wikipedia states that there were 30 Family skits on The Carol Burnett Show and 1 on a show called Carol & Company for a grand total of 31.
--Regulus
Posted by Regulus at 1:14 AM