The Mid-Atlantic Nor'easter, the Isentropic Uplift, and the Canadian Maritime Arctic High -OR- Let's Catch a Rossby (Half) Wave

Updated 9:15AM 12/9/2014: See below. The weather event has already crapped out for D.C. while meeting expectations for Long Island. The Dover AFB NWS radar (DOX) in enhanced base reflectivity mode at 1:09AM EST December 9, 2014.
While most of this precipitation is falling as rain over the Delmarva and New Jersey, there is clearly an ice / sleet signature in the clouds what with all those yellows and oranges. (The composite mode has oranges and reds.)
*******


Well, I had planned an entry tonight but it took me a long time to update this entry about Chris Hughes and the situation at The New Republic. It is now already quite late. I'm also very tired after a long day that included an OK day at work and a good gym workout -- that I am just giving up on the idea. In addition, I am probably not taking the computer home tomorrow night given all the rain forecasted. My intention is to instead do a solo happy hour at No. 9.
About the weather, the forecasted coastal low / nor'easter is developing off Cape Hatteras (with accompanying coastal inverted trough) while isentropic uplift ("up-glide") occurs in association with warm air advection up the Appalachians. 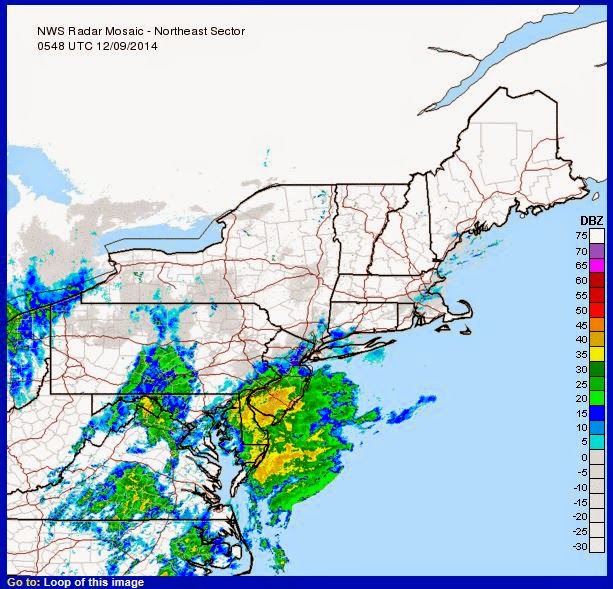 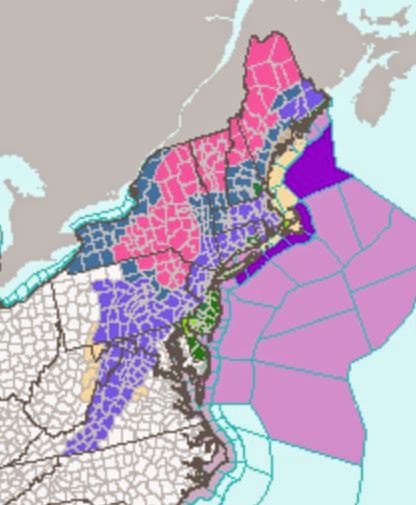 The NWS weather advisories on a color-coded online map updated at 0558UTC (12:58AM EST) December 8, 2014.
Keep I mind that the winter weather advisory trumps the flood watch (not the warning) on the color-coded map, since only one color can be shown at a time. Sometimes this can get tricky -- for instance, a tornado watch often trumps certain kinds of warnings.
******* 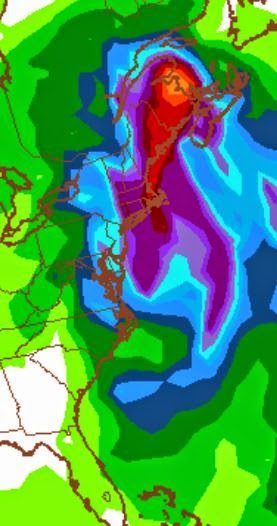 The current NWS quantitative precipitation forecast (QPF) map for days 1 - 3 cumulative has cut back the amount for D.C. proper from yesterday to 0.75 inches and with a gradient running from 0.5 inches in the western suburbs to 1.25 inches along the Chesapeake Bay.


Meanwhile, the entire State of New Jersey is shaded in the 2.0 to 2.5 inch range and New England has over 3 inches of liquid equivalent expected. All in all, a typical nor'easter situation.
The NWS map is below. Note it contains a precipitation amount legend that is the same used in these model outputs; click on it for a larger version. 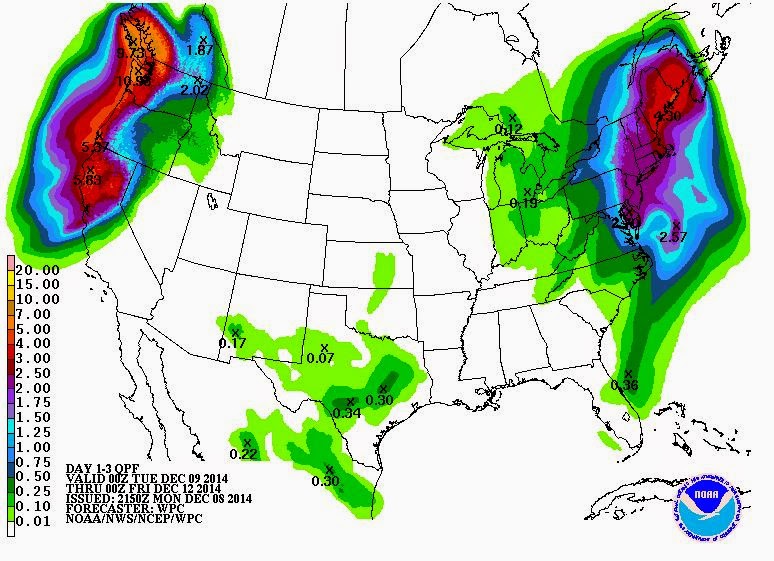 
UPDATED 9:15AM 12/9/2014: The D.C. Crap-Out and Long Island Deluge
I really should not have even posted this entry, at least in terms of it being a "weather-maker" for D.C. proper. Mostly, I just didn't have enough wherewithal to post another entry on a different set of topics. To be clear, the whole weather event is already crapping out for the District proper with the bulk of the precipitation well to the east and north of here. Sterling worked its usual "anti-weather" magic, and the Sue Palka-cabra Creature is VERY pleased. 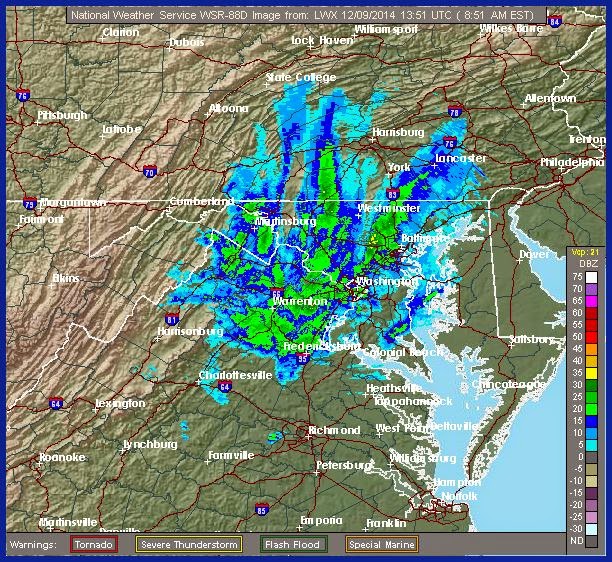 The Sterling (LWX) NWS radar in enhanced base mode reflectivity at 8:51AM EST December 9, 2014.
It's over already.


During the overnight hours, KBWI had 0.39" rainfall through the 8AM hour and KIAD (well west of here) had 0.35" while shitty KDCA had just 0.16" rainfall. At this rate. KDCA isn't going to get much above 0.25" -- which again tells you how useless is the NAM and how much the QPF forecasts always over-predict rainfall. 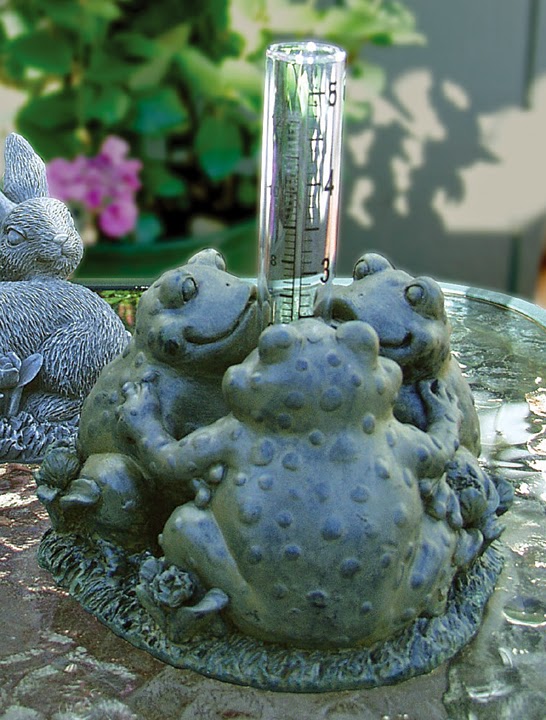 Meanwhile, there was quite a bit of rainfall across New Jersey and into the New York City area with 2.15" through 8AM at KACY (Atlantic City Int'l Airprot) and 0.93" so far at KEWR and 0.90" at KNYC (Central Park) with more to come although the heaviest rainfall area is off of N.J. and approaching central and eastern Long Island.


Amounts in those areas should be in the 2 to 3 inch range easily. No surprise there. 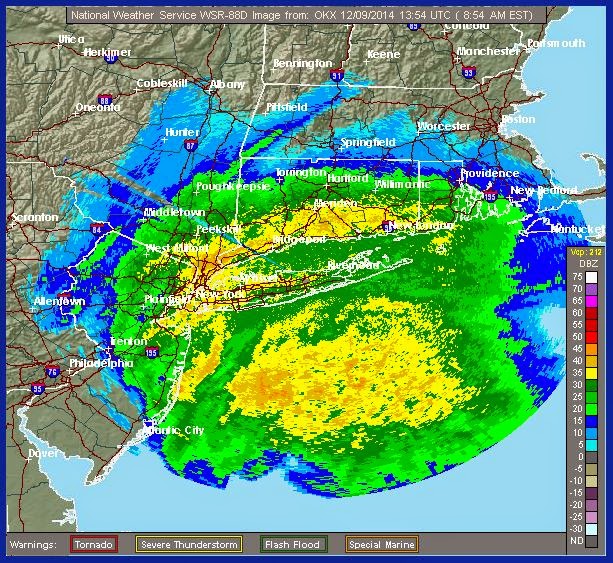 The Upton (N.Y.) NWS Forecast Office (OKX) NWS radar in enhanced base mode reflectivity at 8:54AM Dec. 9, 2014.
Now this is a more righteous-looking radar for a nor'easter rather than the kind of pussy, wussy, worthless stuff you ALWAYS get in D.C.
*******


While I'm not sure the New York City area rainfall will reach the 2.5 to 3-inch range, you can never underestimate how things work out weather-wise there. It's the exact opposite of D.C. and it's worthless weather.
End of update. *******


As noted in my previous entry, the current coastal storm would have been almost optimal for a major snowstorm even here in D.C. proper -- except the really cold air is just missing and instead there will be too much warmer ocean air. The 1046-mb Arctic high over central New Brunswick earlier on Monday has moved over northern Nova Scotia and is heading east, although it is still ridging down the Eastern Seaboard -- hence the cold, gray day with drizzle and flurries in places.
About that Arctic high, it is noteworthy the pressure difference between it and a massive occluded low just southeast of Greenland: 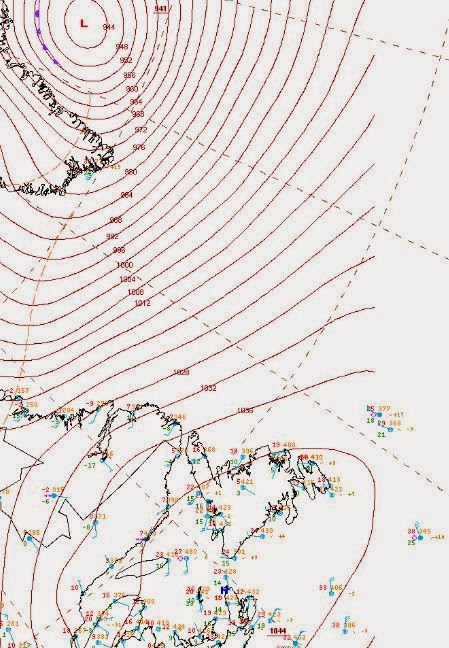 Above is a portion of the 03Z high-resolution surface weather map issued by the NWS showing the area between Nova Scotia and southern Greenland. The aforementioned high has a central reading of 1044-mb and is centered just about over the northernmost point of Nova Scotia's Cape Breton Island (near Meat Cove). About 1,800 miles to the north-northeast is a powerful low with a central pressure of 941-mb.
That's a 103-millibar spread AT SEA LEVEL across 1,800 miles (2,900 kilometers), which might seem like a long distance but it's really not for such a massive pressure change. Indeed, such a large pressure difference over what is a little under the "typical" half Rossby wavelength distance of 3,500-km. (Caution: That's a 13.5MB arXiv journal PDF pre-print, though it should open in a new browser window.) 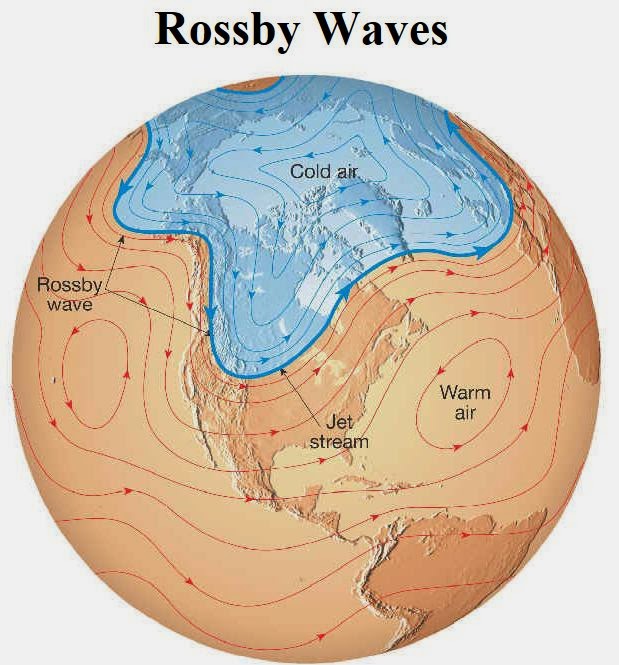 
Now, I suppose you would get such strong gradients in the presence of a powerful tropical cyclone, but that's a totally different situation with completely different atmospheric dynamics (i.e., tropical versus extratropical). Furthermore, the the normal surface pressures in the tropics and sub-tropics would be more like 1015-mb to 1020-mb, not 1044-mb.
*******


OK, that's all for now. I might try to update this blog after work tomorrow.
--Regulus