Implicitly or Explicitly, Not My Intended Blog Entry For Tonight; Still Not Movin' On Up ...

(This entry has one only one image. I might return to it with additional ones.) 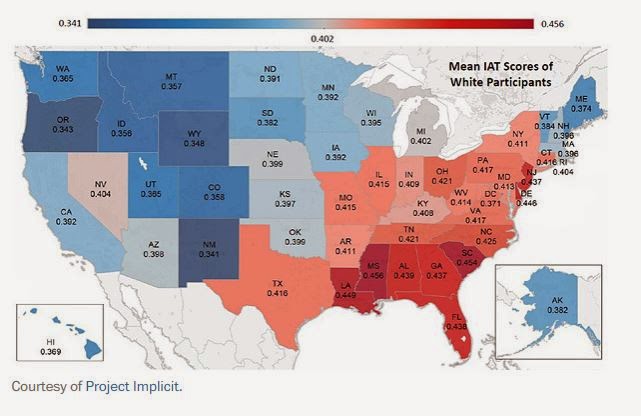 
There was this interesting article on the Washington Post.com Wonkblog site (link embedded): Across America, whites are biased and they don’t even know it.
It refers to the findings from over 2 million who have taken the online Implicit Association Test (IAT) run by Project Implicit based (at least in part) at Harvard University. To clarify, Project Implicit, the racial attitudes test is but one of number tests measuring a broad range of social attitudes as well as behavioral and mental health issues.
The findings show that white people across the U.S. associate black (as in the race) with negative word and hence connotations. In the test -- which I am not taking (see below) -- participants must rapidly sort a series of faces as either "African American" or "European American," even as they sort a variety of words such as "agony," "joy," "happy," "anger" as either "good" or "bad."
As the article explains: "Bias in the IAT is measured in terms of a "D" score, which signifies how much faster people are in their categorizing when African American faces are paired with "bad" concepts (and white faces with "good" concepts or words) as opposed to vice versa. Any score over 0 means that 'when white and good are on the same side, the participants are responding faster than when black and good are on the same side,' explains Kaiyuan Xu, a data analyst for Project Implicit."
The findings show that white people in every U.S. state are biased with a mean national average of 0.402. Xu explained that a score of .35 is the cutoff point between "moderately prefer white" and "strongly prefer white."
To be clear, the 2 million people who have taken the test so far are NOT a random and thus representative sample of the overall population since, as the article notes, these people have chosen to take the test and skew younger, more liberal, and more female. Thus, the findings are quite possibly underestimating white bias.
Obviously, as the article notes, such biases among law enforcement could -- certainly does -- have life or death consequences in split-second decisions by police.
The number of test takers so far (at the time of the article) ranges from a low of just over 1,700 in Hawaii to nearly 100,000 in California with the other 48 states and the District of Columbia between those two figures. State figures range from 0.341 in New Mexico to 0.456 in Mississippi. Interestingly, Georgia and New Jersey came out the same at 0.437. Here in D.C. itself, the figure was 0.371.
Presumably, these figures will change as more people take the test, especially since these are not random samples. However, the overall pattern isn't too different from what one might expect.
I'm not sure how the test is determining who is white and who is black -- I suppose it is on a set of questions.
As for the test, I am not taking it because I know what it would show.
I do have a defense, of a sort. It's not one the Salon.com and more general media PC thought police would let me express. More to the point, I don't really want to go into it now. Suffice it to say that I have lived in the urban environment of D.C. for as many years, had problems including two group muggings back in the 1990s, and all around as I've gotten older for better or -- probably -- worse, I have amassed a great deal of fear and wariness.
Needless to say, I'm not exactly a candidate for some dopey liberal arts college and its race and gender studies programs. You know the kind of college -- one that charges $80,000 a year to support tenured facility living that life of blissful academic welfare and the whole infrastructure and machinery of the school while providing a "product" that has very little value in our brutal, dystopian economy geared only to help the 0.1%.
But that's OK: We're all here to hold hands and sing Kumbaya, or at least to go through another day while Senator Mitch the Bitch on Capitol Hill sneaks in this or that provision to make the world safe for Big Finance and Wall Street oligarchs. Well, come to think of it, many Dems basically do the same thing. Oh, and that torture report came out this week but let's save that topic for later.
True, I haven't mentioned much -- if anything -- about the news and reaction to the decision by a grand jury not to indict police officer Darren Wilson in the killing of Michael Brown. I've viewed that whole situation has very murky and the protests in Ferguson fanned by all manner of agitators including many from the outside.
As for the Eric Garner killing by NYPD Officer Daniel Pantaleo, it's just outrageous that Pantaleo wasn't indicted. It's a horrific miscarriage of justice, and I'm very glad the Justice Department is investigating that one for civil rights violations given the local failures. (As for 29-year old Pantaleo, he looks like the embodiment of a truly dumb Italian American policeman from Long Island or Staten Island. Talk about implicitly associating, but to me looks like that "Guido" gym rat type. You can Google image him if you're curious -- I'm not posting any pictures of him here.)
I mentioned my view about the Garner non-indictment to a friend who is black -- not to mention brilliant and eloquently insightful, so much so that I love to listen talk about, well, anything -- and he said that's because I and other white Americans view Garner as "a good Negro." That ended that conversation and we changed topics.
Does anyone remember that episode of The King of Queens in which Doug was having a dream and he walked in on Deacon as a minister excitedly preaching to a black congregation while a choir shouted and sang. The sermon he heard in his dream was: "FISH DON'T FRY IN THE KITCHEN! BEANS DON'T BURN ON THE GRILL!"
Yes, with that emphasis on those words. Ha ha


Maybe I'm not that different from Doug Heffernan in my perceptions.
As it is, a lot of people seem to agree with me on this issue. Of course, it's almost impossible not to when you watch that awful video. I'm glad there have been so many protests and "die ins" and all those "I Can't Breathe" shirts worn by all those professional black athletes.
OK, that's all for now. This wasn't exactly the entry I had in mind but it is what I wrote.
--Regulus