Holly's Story (Posted Because It Just Has To Be) 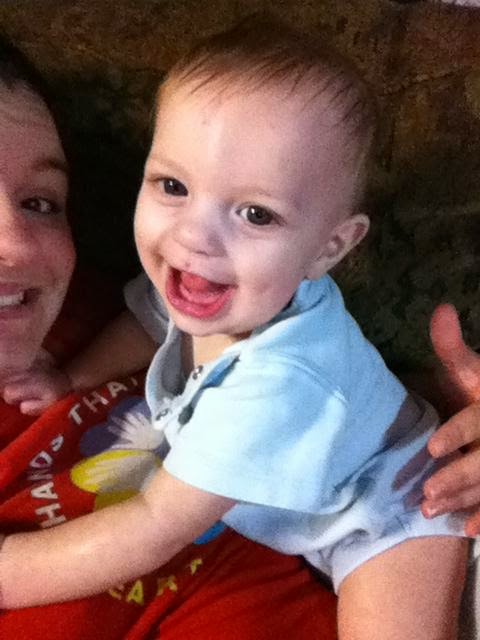 
At work today, this article appeared on Yahoo News (link embedded): Facebook Photo Could Have Saved Kid's Life. It includes the picture that I am posting as the lead to this entry.
I'm posting a brief synopsis as well as a link to the young mother's blog. It's not the sort of topic I would normally post, but it is so incredibly sad and awful that this little boy's infant life was taken in such a horrendous manner that it needs to be told. As it is, I simply cannot read the piece -- or, even more so -- look at the images on the lady's blog without crying.
In brief, a young mother, Holly Wagner, lost her barely 1-year old son, Cameron Wagner, back in May 2013 as a result of a horrific combination of having him improperly fastened in a rear-facing baby seat (instead facing forward) and her now-ex-boyfriend's distracted and/or reckless driving.
The idiot was driving too fast -- possibly texting, too -- and apparently ran a stop sign and there resulted a horrific crash. Holly's two other young boys were also in the car including 3-year old Conner. The others were injured -- the ex-boyfriend needed brain surgery -- but all survived and recovered.
But Cameron had such severe injuries -- he was found in a ditch -- that he was basically brain dead and could never recover. The accident happened April 27, 2013 and Cameron was removed from life support on May 12, 2013 (the day before Mother's Day) and he died on May 13, 2013 (Mother's Day).
The story is more about focusing on proper use of a car baby seat and, indeed, he young woman's blog entry (indeed, the only entry on the blog) is focused on that topic (link embedded): Why didn't anyone tell me I was wrong?
(The blog name incorporates the day of Cameron's death: Mommy of An Angel 51313. The entry title is in reference to a Facebook picture of Cameron improperly fastened in his seat. There are presently 413 comments but I didn't read any of them. There are also nearly 3,700 comments on the Yahoo articled. Again, I daren't read any of them even if 99 percent of them are decent.)
The worst part is how this poor young lady beats herself up over this mistake (all the more so because it wasn't even she who fastened Cameron into that baby seat but her flippin' ex-boyfriend).
There is a YouTube clip about Cameron and his story, but I just can't watch it right now. I'm not even sure where Holly is from or where the accident occurred. Somewhere in the United States.
There is also a picture on her blog of her holding her baby in the hospital shortly before he died. I'm not posting that one -- it just wouldn't feel right to do so -- but the link to the larger picture is here. An elderly priest or minister of some sort is administering last rites in the hospital emergency room.
Again, I can't look at it without crying. (I had to walk into the empty conference room at work.)
I'm really sorry, Holly. I don't know why these things happen.
As for the ex-boyfriend, I'm not going to despoil this blog entry to the memory of an infant boy by saying anything, much less what I think of him. However, this needs to be said: The moral calculus of any Anthropomorphic God's Universe really is profoundly screwed up that the waste-of-space-and-time (and Earth's resources) dirt-bag of an ex-boyfriend lived while this baby died.
But we already knew that.