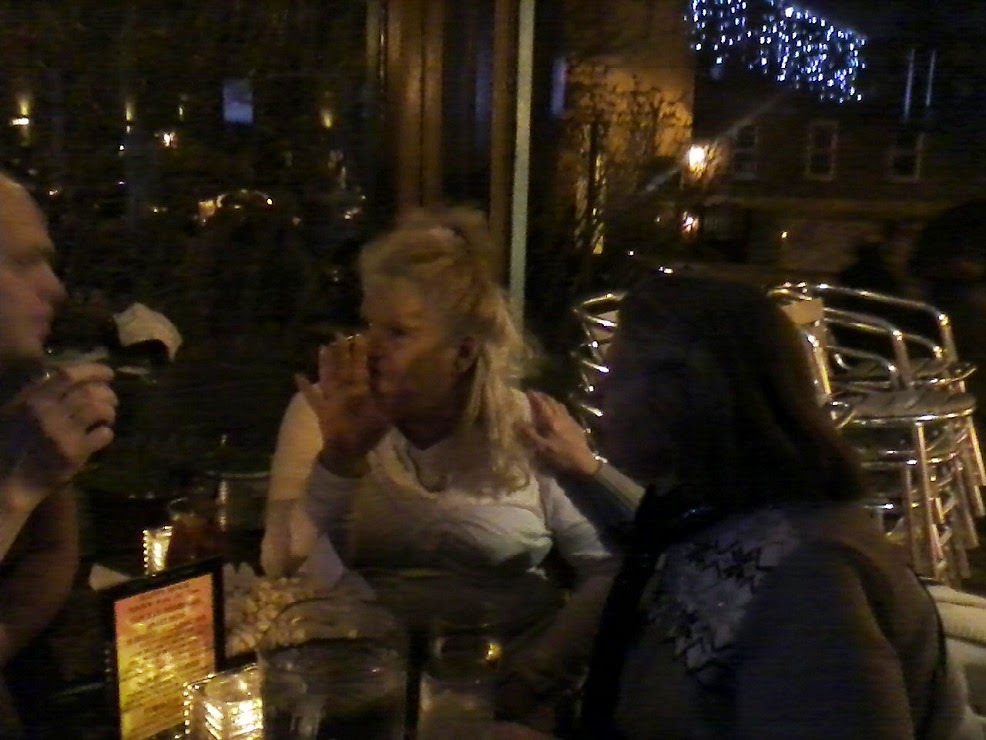 Alas, this was the only (low-resolution and poor-quality) picture I got of my mom (right) and Sharon during our wonderful time at Larry's Lounge on Saturday night. They were talking to Kristof (left). Washington, D.C., 9:42PM December 20, 2014.
Yes, I'm going to get a better phone -- a flippin' Smart one -- at some point in 2015 and give up my little flip open. I'm probably going to have to dump Verizon as my carrier to do it though.
*******


This is a just a brief update before I go to bed. I really don't have any pictures for this entry, and I'm not even going to try.
So it turned out to be a wonderful weekend with my mom's visit. Last night with me and my mom and Gary and his mom (Sharon) was just all-around awesome including our brief drive-about of the city's monumental core at night and dinner at Logan Tavern. (I really like Logan Tavern.)
And the visit to Larry's Lounge was just tremendous.
My mom and Gary's mom got to meet quite a cast of characters including ones they had both previously met -- Kristof -- and those only Sharon had met -- Larry P. -- and those regulars that neither had met -- Jamie B., John L., Mark D., Dave J., Gunther, Bill S., and even Ani (visiting the U.S. from Madras Chennai for two weeks).
It was like that final episode of The Colbert Report in terms of the diversity of folks.
(Of note, hadn't seen Ani since May 2012, and he immediately noticed my weight loss. He and my mom really hit it off). Oh, and my friend Nick also showed up. (I was on the White House tour with him earlier in the morning.)
Only Brett and Chris H. were missing, although I neglected to text Brett to see if she were free. Oh, and Wendy was busy, but she has previously met my mom. (I saw Chris tonight at Larry's Lounge after dinner with Wendy at Bangkok Thai Dining on P Street. This was our second time at that enjoyable little subterranean Thai restaurant with its old décor.)
Dinner at Logan Tavern was also really nice. Andrea and Imara joined the four of us.
Prior to that, the four of us -- having about 25 minutes until our reservation -- stopped into No. 9. It was there that I introduced my mom to the bartender Jose, who was working upstairs, and he was very pleasant to her.
The downstairs bartender was also nice enough to let me use the happy hour two-for-one ticket immediately to buy two glasses of wine. And compare that to what I describe below.

The ONLY part that wasn't good was what happened a bit earlier at Firefly.


By way of explanation, my mom stayed at the Hotel Madera on New Hampshire Avenue just south of Dupont Circle. Upon my return to her hotel room, we went downstairs to wait for Gary and his mom because Gary had to drive out to Fairfax County to get her. We opted to go to Firefly, a restaurant that is part of the hotel and to which I have gone two others times -- once for an overpriced dinner and once for a group happy hour that had too many people in such a small space. 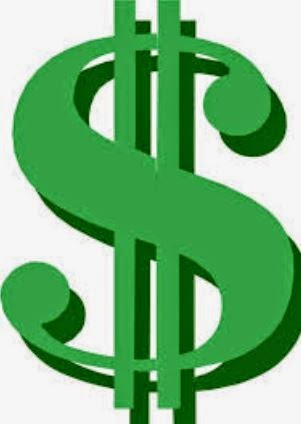 We ordered two drinks that with the tip came to $30. Gary and Sharon showed up and they also got two drinks that cost about the same. So that's $60 for four drinks, which is outrageous. However, that's not the issue. In libertarian garbage-speak, we "freely chose" to go there and with our "infinite information," we entered a "contractual arrangement" -- or whatever anti-life nonsense they spew.

But what happened next prompted me to call on Sunday afternoon to lodge a complaint with one of the restaurant supervisors ("Casey" -- unsure of spelling). I didn't actually witness the event or I would have complained right there. (And if there is one thing I do well, it's complain.)


The bar at Firefly is quite small. And on the counter are drink condiments that include bowls of grapes, olives, and orange wedges located just inches from customers.
Sharon, who was hungry, reached for a grape only to have this female bartender pull it from her and throw a napkin over the grapes. This startled Sharon and she didn't know what to say. 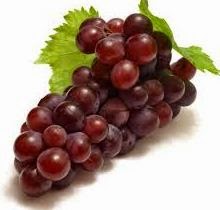 That is an outrageous way for your staff to treat anybody (much less an older lady ) who is shelling out an inordinately large amount of money at your overpriced establishment.


At a minimum, please do not put drink condiments -- that is, PEOPLE FOOD -- in dishes and bowls inches from your customers and expect them not to eat it. I don't care what your damn rules are or how you "think" people should behave because that's not how the world actually works -- even in the Emerald City Oz that is Washington, D.C.
It was a shitty thing for your bartender to do, Firefly, and you've given me a solid reason never again to patronize your establishment.
To her credit, Casey said it was an "inexcusable" thing to do and would talk to the bar staff. Oh, and to be clear, the other bartender was fine: He diligently and with no attitude made the two drinks for my mom and me (an amaretto sour and what they call a "Sub Rosa").
OK, that's all for now. I intend to update this blog tomorrow after the gym with either the Thursday night Woodley Café meteorology gang reunion photos or the Saturday morning White House tour photos.
My Buffalo trip with Gary is set for Christmas Day. It's still not really looking promising for much snow, although the lake effect machine might turn on, at least a little bit, over the weekend. The GFS model just sucks all around -- is basically worthless beyond day 5. The NAM just sucks for rainfall amounts and predicting snow here.
But let's leave that topic for another entry.