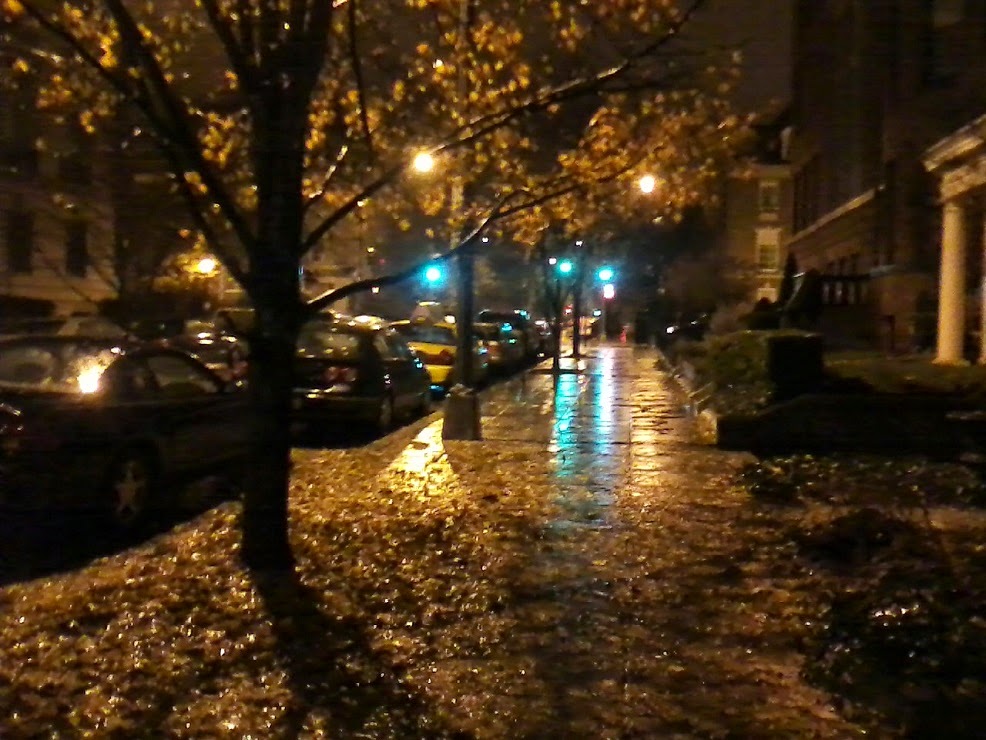 The wet sidewalk with pulpy fallen leaves on a rainy "electric dreams" night in the city, 1700 block of Q Street NW, Washington, D.C., 9:39PM December 2, 2014.
Nine of the 15 ;pictures in this image were taken on Tuesday night after work -- a non-gym night -- as I walked from L'Enfant Plaza and across the National Mall in the foggy drizzle and intermittent showery rain, stopping at Elephant & Castle on Pennsylvania Avenue, then continuing on to No. 9 where I stopped for about an hour, and thence over to Larry's Lounge (en route to which the above picture was taken), where I met Dave J. and Gary (and, as I left, Brett) and then home around midnight to go to sleep. That was about 3-1/2 miles of walking in all.
******* 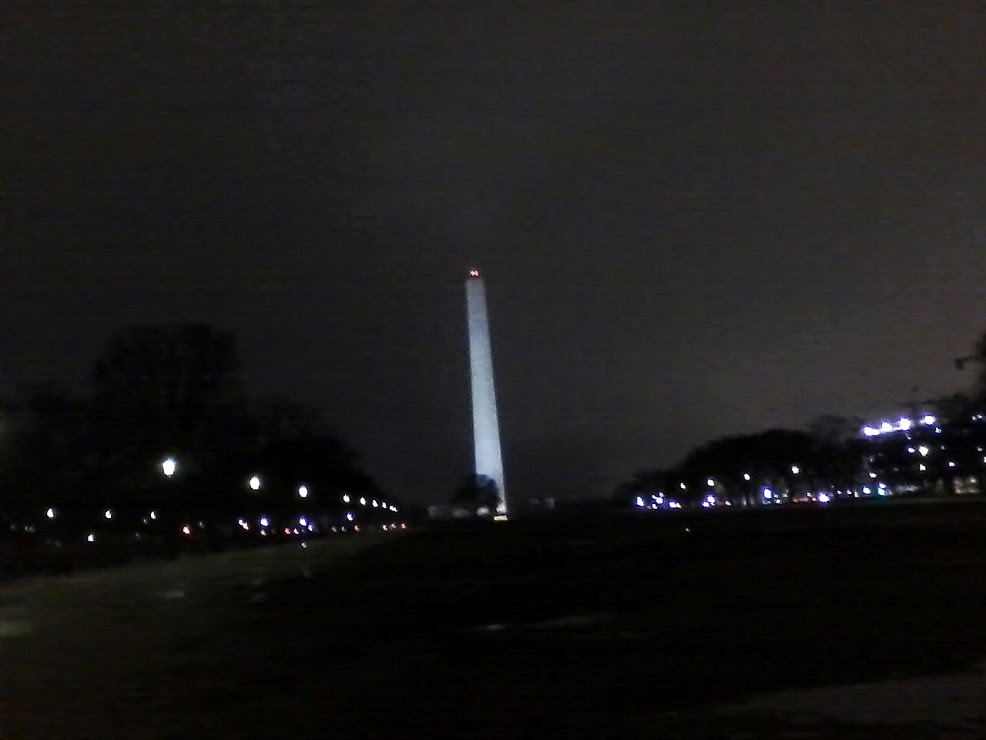 The Washington Monument as seen on a foggy, drizzly, showery night through my low-quality cellphone camera, Washington, D.C., 6:34PM December 2, 2014. However, at least I caught the twin bright red "eyes" (on this east-facing side) in an "open / on" state. (The Monument has four pairs of such eyes that blink in unison and have done so since February 1995. Prior to that, they half-blinked gently and variably out-of-phase.)
*******


I had intended to post an entry tonight following my work day and gym visit, but I'm tired. Furthermore, the previous entry I just posted -- because it is a story that I feel must be told and shared -- just knocked the emotional wind out of me, and now I'm drained and exhausted.
In particular, I wanted to post excerpts of this excellent piece by Thomas Edsall of The New York Times (link embedded): Is Obamacare Destroying the Democratic Party? 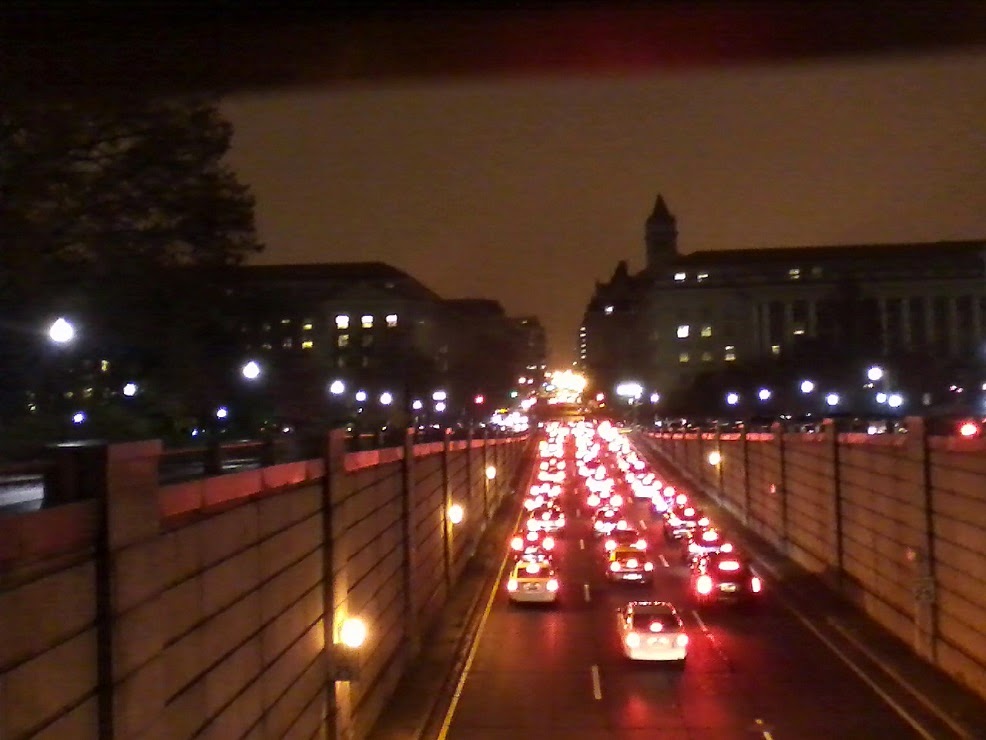 Car tail lights as seen along the 12th Street Expressway where it exists under the National Mall and emerges into downtown Washington, D.C., 6:36PM December 2, 2014.
*******


It takes as its launching point the speech given by Sen. Charles Schumer on Nov. 25, 2014 at the National Press Club -- just weeks after the latest midterm Democratic debacle -- in which he stated that it was a strategic mistake for Pres. Obama and the Democrats in 2009 (then with big majorities) to focus on the Affordable Care Act ("Obamacare" or, in GOP-speak, "ObamaCare") instead of other actions that would have helped the Democrats with working class folks (read: working class white folks). 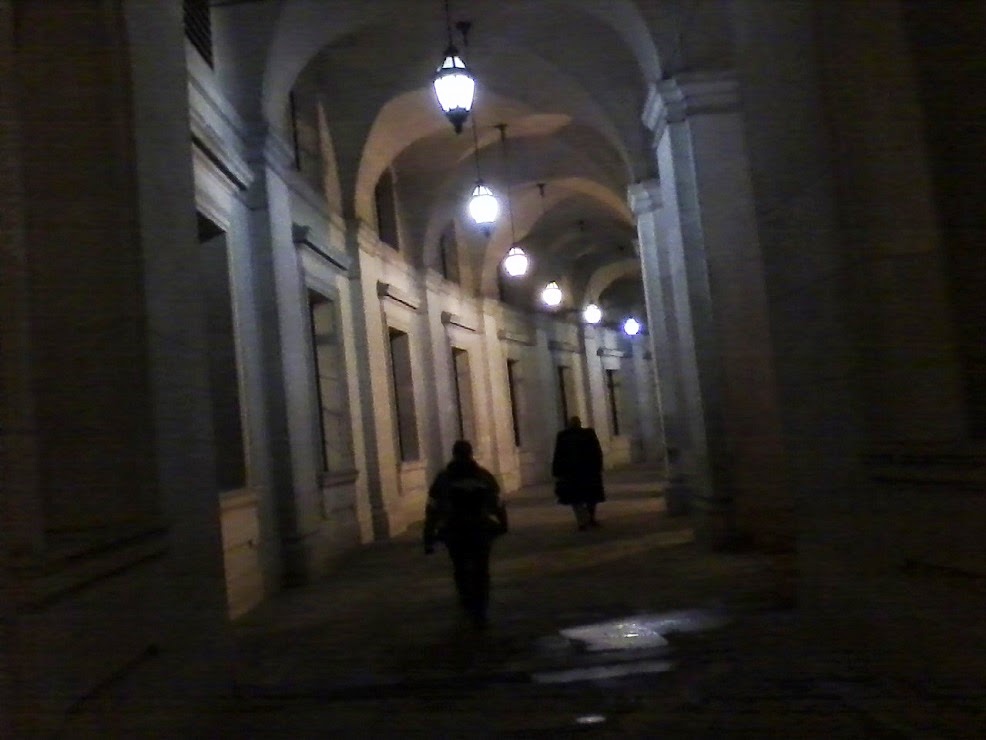 Part of the gracefully curving (semi-circular) exterior walkway of the William Jefferson Clinton Building -- formerly and for many years the Ariel Rios Building -- in Washington, D.C., 6:40PM December 2, 2014.
*******


Edsall develops this idea and provides what I think is convincing evidence that it did make a real difference -- and in a very bad way.
He also cites a Jan. 2014 Brookings Study by Henry Aaron and Gary Burtless -- direct link to full study here and to study summary here -- showing the estimated percentage changes by income decile on average income based upon the ACA provisions. The assumption, I believe, is for people who did not have employer-provided health insurance. 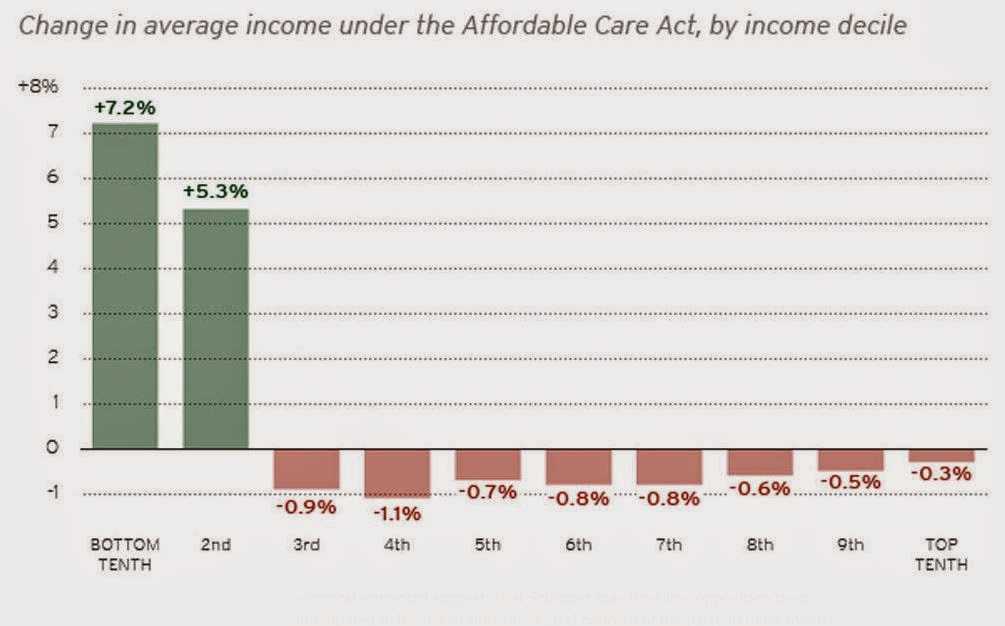 The figure in the summary is key. It is posted directly above. Click on image for larger version.
These are just estimates, of course, and for only a subset of the population. However, based on admittedly anecdotal evidence I have heard from those who buy their health insurance -- a bartender I know and a Larry's Lounge regular -- their stories match these findings.
Furthermore, at least in my company's case, legal requirements of the ACA are causing a profound change in the types of insurance offered with the "low" versus "high" coverage option now nearly identical -- and the former vastly more (an additional approx. $1,000 per year just for a single person such as myself) and instead a not-so-subtle push into a high-deductible plan that also includes the health spending account. 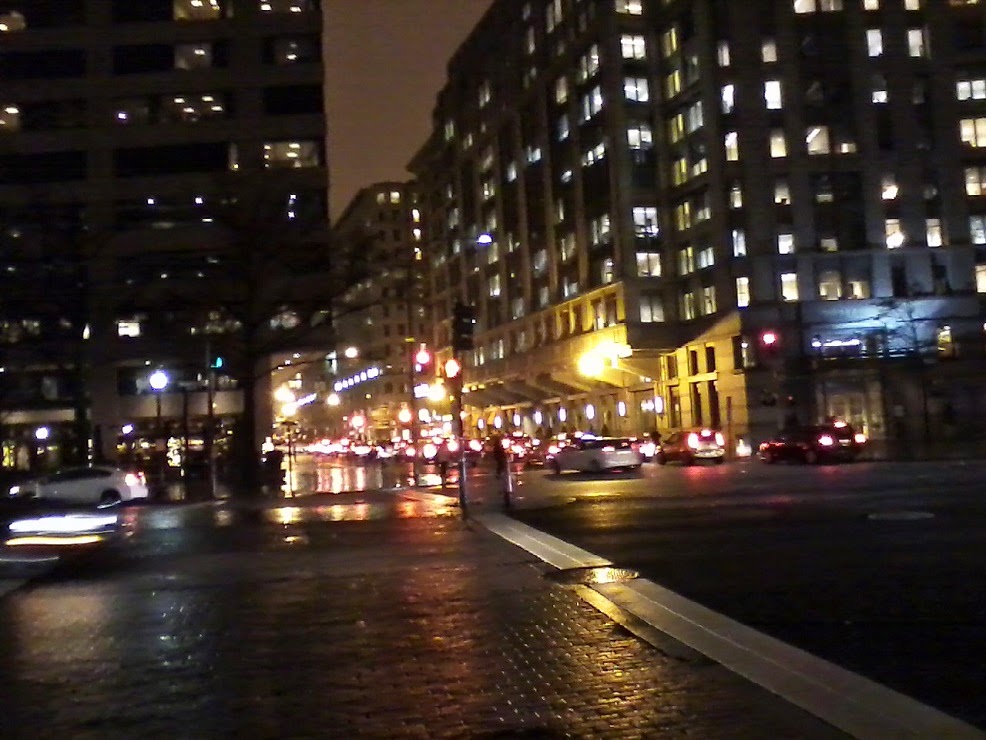 
As Kevin Drum noted in a follow-up piece to his earlier OUTSTANDING piece on why white working class voters will NEVER vote for Democrats again, the ACA is apparently turning out to be yet another example of Democratic Party liberal largess that really doesn't benefit these folks. Rather, to the extent Democrats are a party of "the left" at all, they support policies that disproportionately benefit the really poor (e.g., minimum wage laws, Medicaid, WIC, food stamps, etc.) 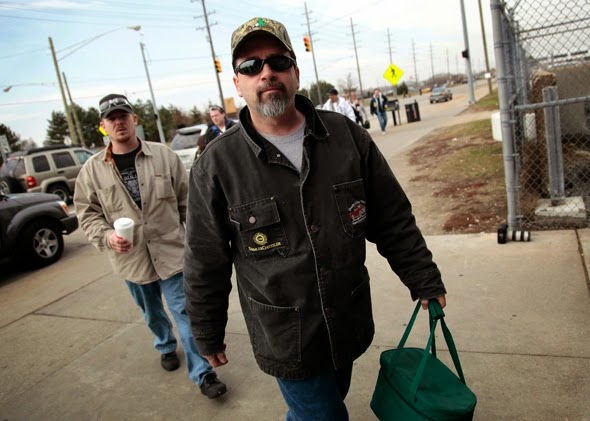 These two fellows likely won't be voting for Democrats ANY TIME on this side of eternity.
*******


Here are the two Drum pieces (with links embedded):
Can We Talk? Here's Why the White Working Class Hates Democrats (Nov. 13, 2014). This is a MUST-READ one.
A Follow-Up: Why the Working and Middle Classes Don't Like Obamacare Much (Nov. 20, 2014)
Let me just say this is one of those rare times when I just disagree with Paul Krugman, who semi-angrily dismissed the whole notion in this blog entry. He is dismissing out-of-hand an important conceptual and political issue by implicitly relying on an argument that sees the (very) long-term benefits of the ACA. 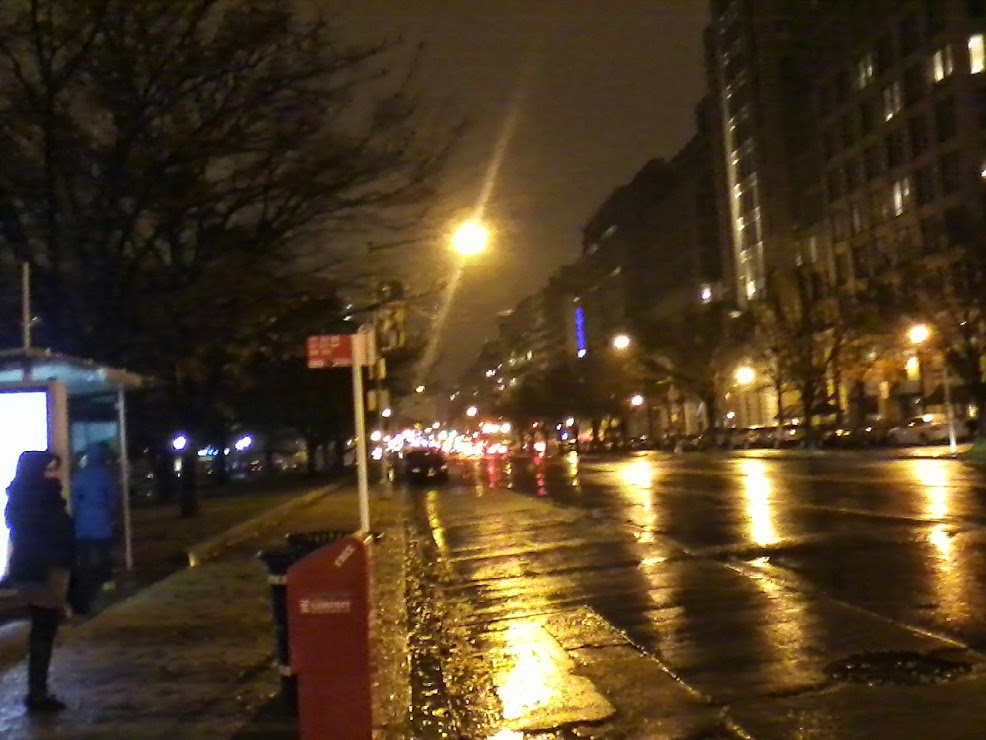 
Now I realize it is probably too soon to make any definitive statements, but those two Drum pieces (which I had intended to post or at least excerpt) actually changed how I think about the ACA and why Dems are always losing in the fashion that they do. It's actually not entirely a "What's the Matter with Kansas?" kind of mindset driving it (though that is definitely there). 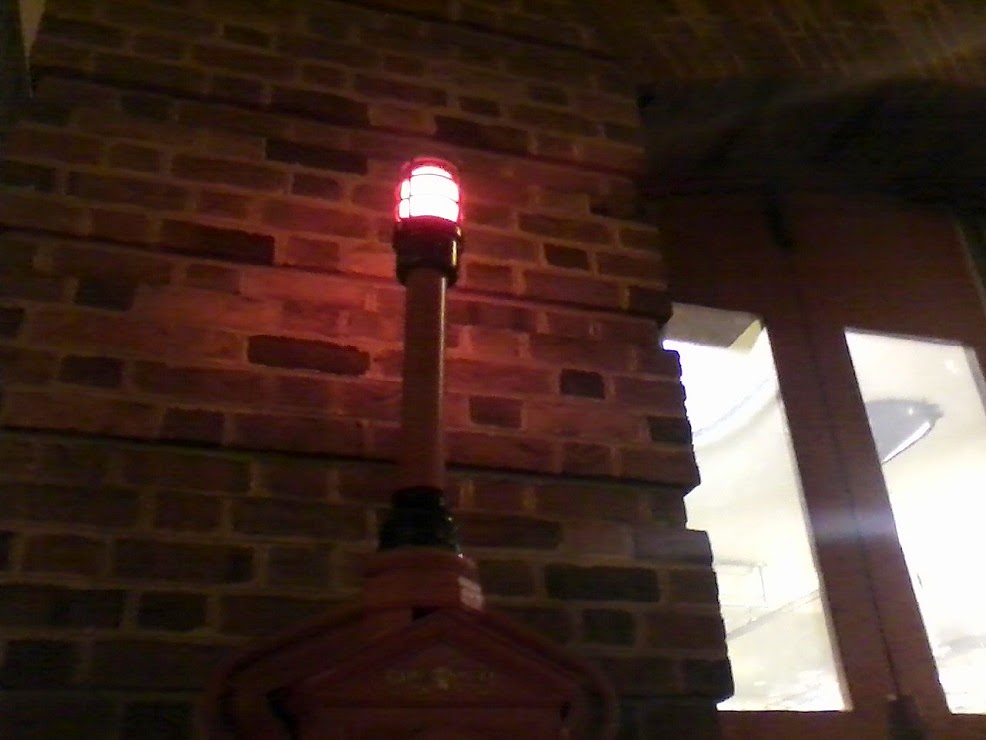 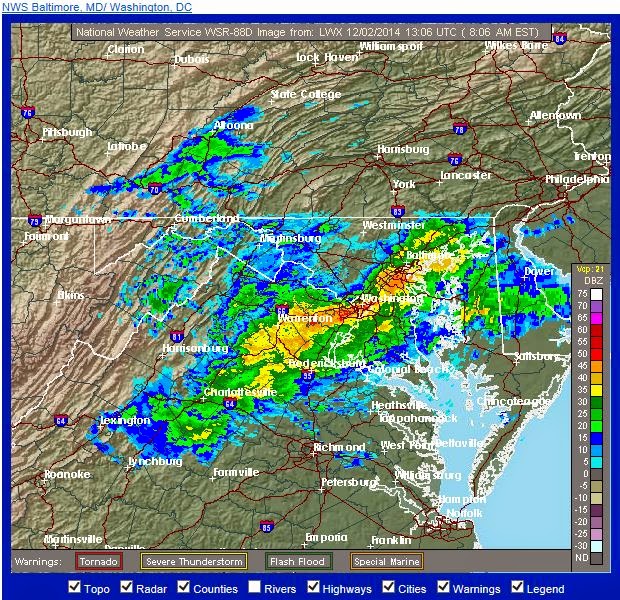 The Sterling (LWX) NWS radar in enhanced composite mode at 8:06AM EST December 2, 2014.
Composite mode "sees" inside the clouds as well and therefore usually looks more dramatic. The oranges and reds right over the District of Columbia were certainly sleet at higher altitudes that melted on the way down to fall as just rain.
******* 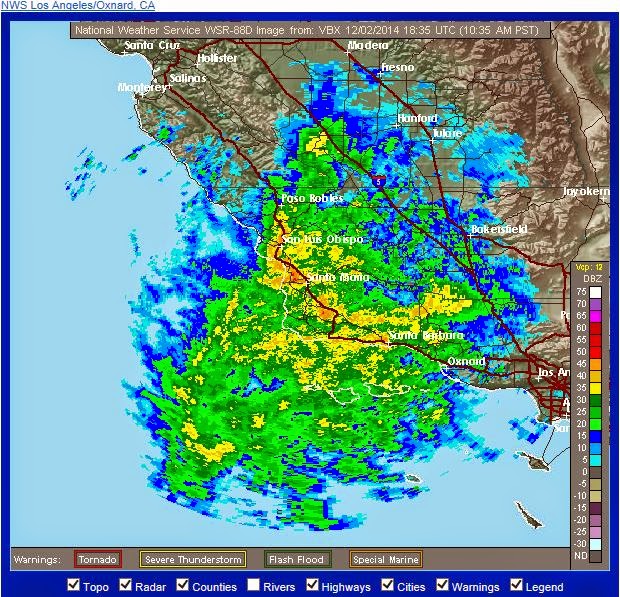 The NWS radar at Vandenberg Air Force Base (VBX) in enhanced composite mode, 10:35AM PST Dec. 2, 2014.
Whether in composite mode or base reflectivity, it was an unusual set of radar images for Southern California. Years can pass without anything like that.
******* 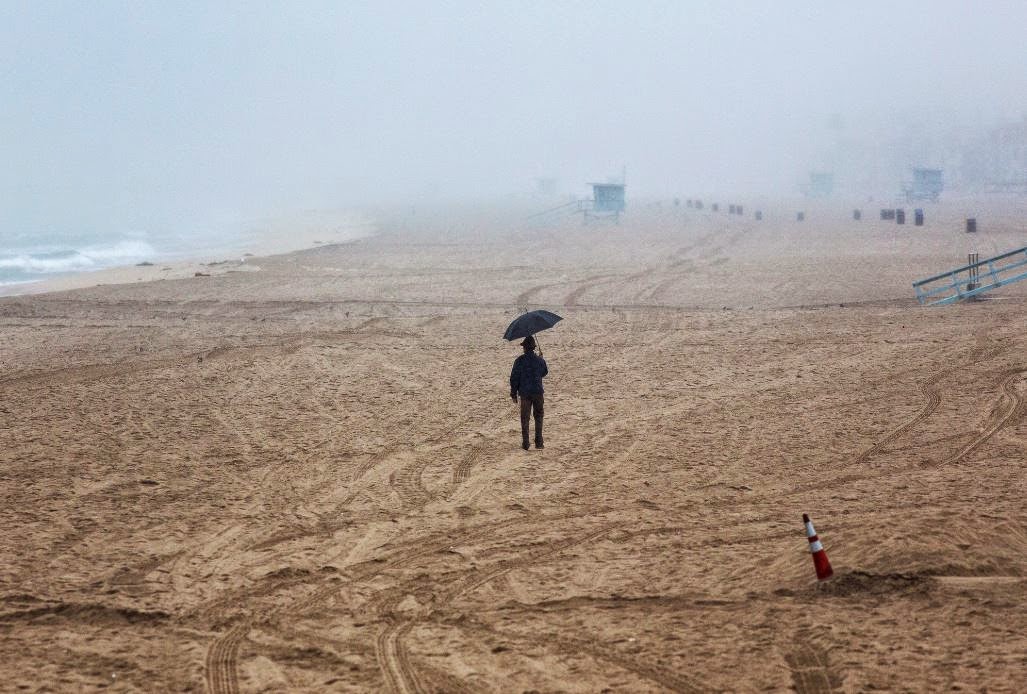 A lone figure under an umbrella walks along the Pacific shoreline in the rain and fog in Hermosa Beach on a welcome Southern California rainy day, Dec. 2, 2014. This was the lead picture in the above-linked article.
*******


However, I'm home now and getting ready for bed. Let me just end on a humorous note, though, with this article I came across on Wednesday: How to Spot an American in Any Airport. 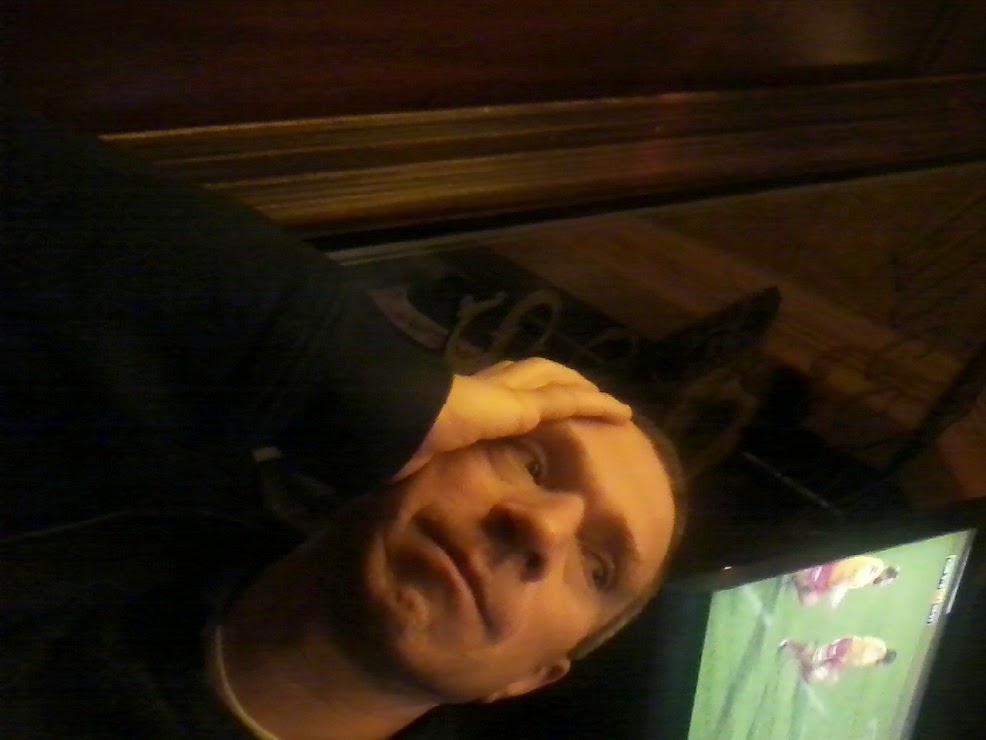 
It features the top 10 ways to spot an American. Naturally, this didn't go over that well with American readers judging byee a smattering of the 3,145 (and counting) comments. Some of the top 10 list are really funny including making a beeline for the first McDonalds they see, not even knowing where they are, and immediately stripping down whenever they get in a security line (queue).
The stock picture directly below is featured for this bullet point. 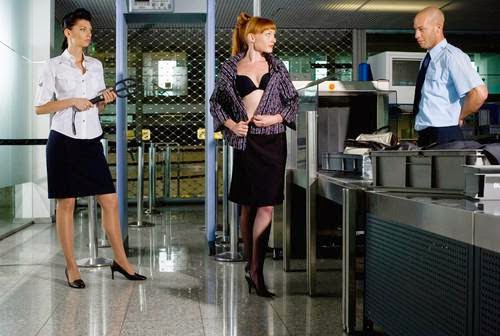 
Oh, yes, as a follow-up to my mention of my blog pressure issue, I've been taking my blood pressure a few times a day the past two days with my little portable device, and the numbers have varied widely -- from really bad numbers (150 / 95 or so) to relatively OK (123 / 83). In any event, I made an appointment to see a doctor at the end of next week (the 12th) to discuss the matter. 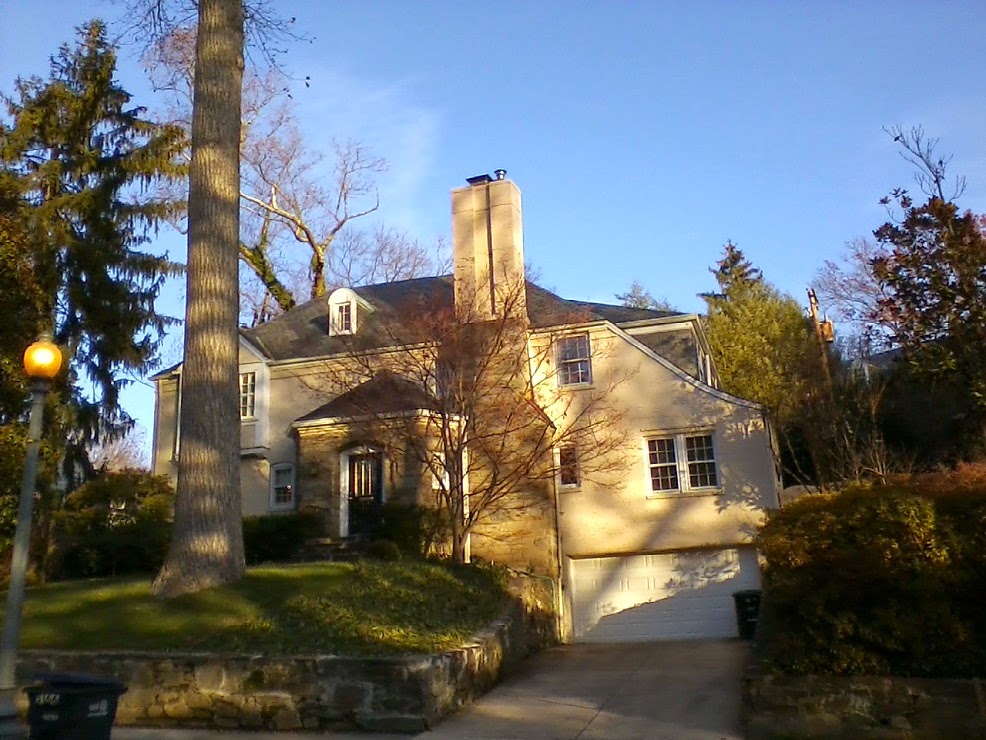 The house at 5166 Tilden Street NW, Washington, D.C., 3:50PM November 28, 2014. Somehow I forgot to post this particular image in the batch that I posted in this entry.
I found on Trulia and Zillow that this house in the Spring Valley section goes for approximately $2 million. Guess I won't be buyin' it anytime soon.
*******


OK, that's all for now. I'm not anticipating posting an entry tomorrow (Thursday) evening as I am meeting Kristof at No. 9 after work and might not even take the computer home. My next planned update would then be Friday evening or on Saturday.
--Regulus