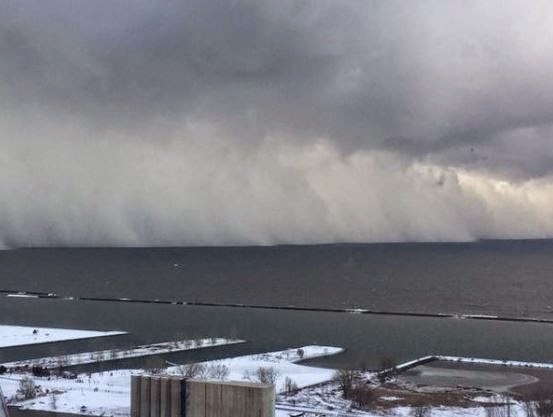 The massive snow squall -- resembling one of those desert haboobs except its grayish white -- as seen from the top of a skyscraper along Lake Erie (unsure of exact location) and looking (I think) south around 9:30AM Nov. 18, 2014. Source here.
*******


I had just created an update to my previous entry to note the fantastic amounts of snow that fell south of Buffalo yesterday -- as much as five feet of snow -- and the incredible gradient associated with it (KBUF itself had 6.2" through 8AM this morning). I also had pictures that I found on the Capital Weather Gang in this entry. 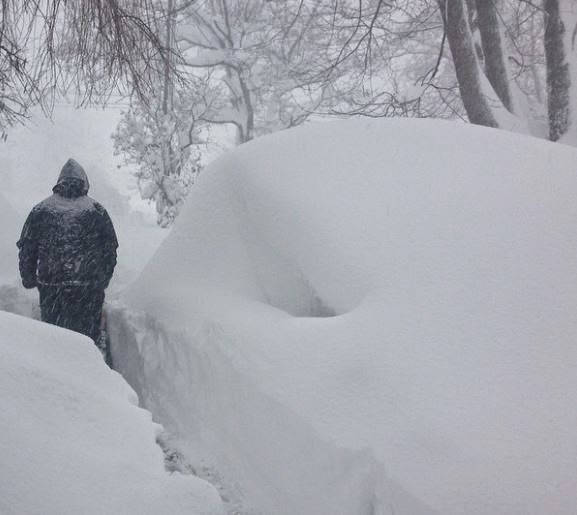 Blizzard conditions with massive amounts of snow in the south suburbs of Buffalo on the morning of Nov. 18, 2014 in a picture posted by Nicole Milligan.
*******


However, my fucked up browser decided to freeze up for whatever asinine reason (the sort that pleases Wall-P and his Big Telecom racket, excites the Hysterical One, and earns Bill Gates another billion dollars), and so I lost the entire update, so it's gone. However, I've basically recreated in here in this short, separate entry. 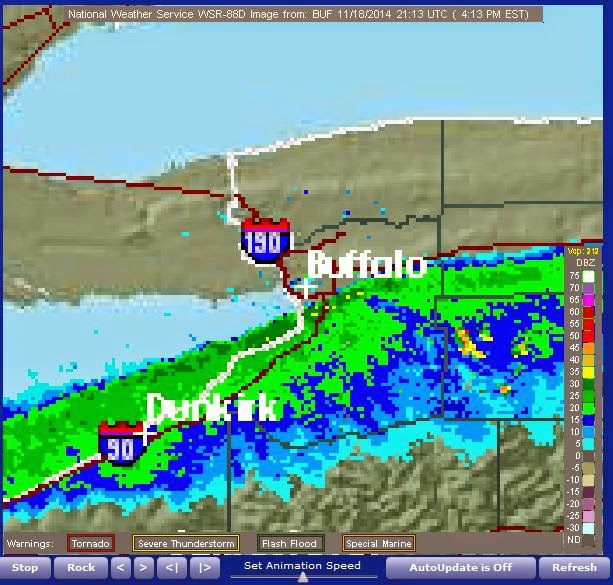 Close-up image of the KBUF NWS radar in enhanced base mode reflectivity showing the intense snow band and incredible snow gradient associated with it at 4:13PM EST Nov. 18, 2014. The snow band was like a fire hose off Lake Erie.
*******


Through 930AM this morning, the highest snowfall totals were in Gardenville, N.Y., with 60.0 inches and in West Seneca, N.Y., with 57.0 inches. The airport itself (KBUF) had 6.2 inches. I'm not sure that even those incredible amounts are record-setting for that region overall. Whatever the case, the snow band has slowly shifted north and is gradually dissipating as the winds relax.
*******


I also mentioned in that failed update -- and I am restating it here -- that I am having trouble posting entries this week. My schedule is simply too cluttered and disjointed and the hours just aren't there. In addition, I have a large multi-part assignment at work that is going to require I do some work at home after I get back from the gym late tonight. In short, I'm not sure when I'll be able to update this blog this week -- potentially not until Friday night.
******* 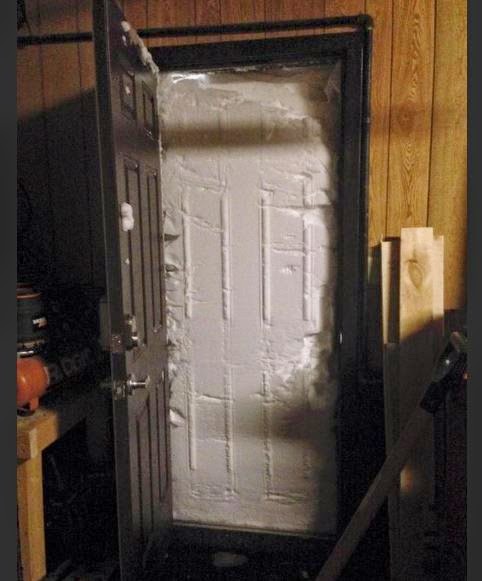 West Seneca had just about 5 feet of snow in the lake effect blizzard. I love the imprint of the door design on the snow.
*******


I would like to add some additional content including amazing photographs and time lapse images of the "wall" / standing "haboob" of snow that engulfed the southern sections of the Buffalo area for much of Monday. The images are from this SPLOID / Kizmodo site and another CWG entry, although these sites took the images, in turn, from various Twitter and Instagram user pages. 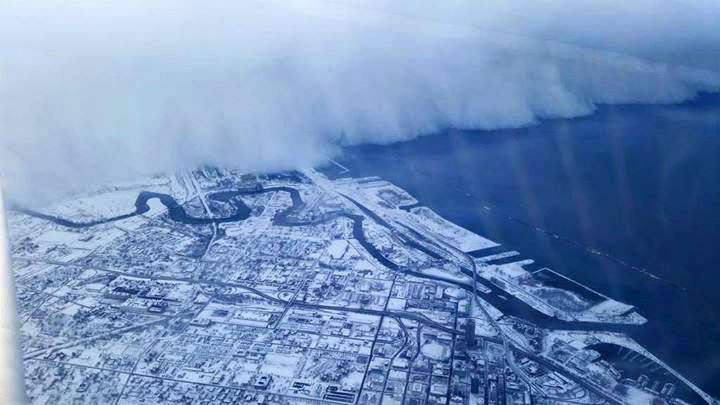 An aerial view taken from about 25,000 feet or so above Buffalo showing the haboob-like snow squall.
Yes, "haboob" -- and, yes, it's an Arabic word used to refer to a powerful dust or sand storm, and no, it doesn't mean Obama is a Muslim/Kenyan/Socialist who is secretly doing weather modification experiments to confuse you about anthropogenic climate change, that is, global warming. More to the point, if  you're such a paranoid Teabagger that you don't like that Arabic term, I also suggest you don't use the word "algebra." Or for that matter, the names of the brightest 50 or so stars. Of course, if you're that dumb, you're unlikely to know much algebra or astronomy. Thank you.
*******

A 32-second time-lapse video taken by Alfonzo Cutaia atop the Guaranty Building at 140 Pearl Street in Buffalo, N.Y., on Nov. 18, 2014 showing the lake effect snow squall in all its haboob-like awesomeness. Note that the squall is moving mostly parallel to the image -- so it never really engulfs downtown Buffalo where this is located.
******* 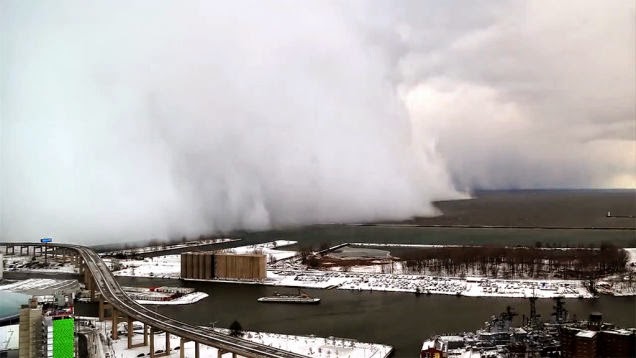 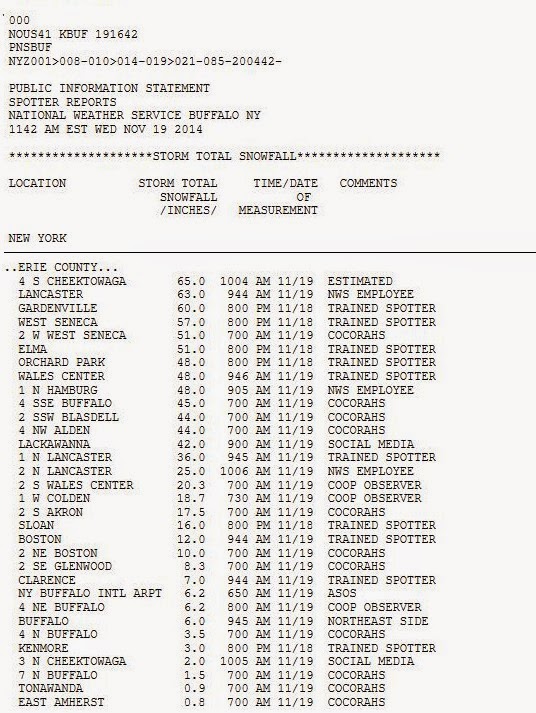 Above: A slightly truncated screen shot image from a public information statement put out by the Buffalo NWS Forecast Office of the storm total[1][2]. I would link directly to the webpage but the content of this page will change quickly. Also, the "COCORAHS" reference is really CoCoRaHS and it refers to the Community Collaborative Rain, Hail & Snow Network.
Notes:

[1]I edited out the snow totals preceding it and went straight to the Erie County ones just so it could have the time-stamped header.
[2]To be clear, it is still snowing at this midnight hour in Buffalo -- but this is associated with a frontal system about to sweep through and in the whose wake there will be another round of intense, localized lake effect snows that could bring 2 to 3 feet in certain spots. 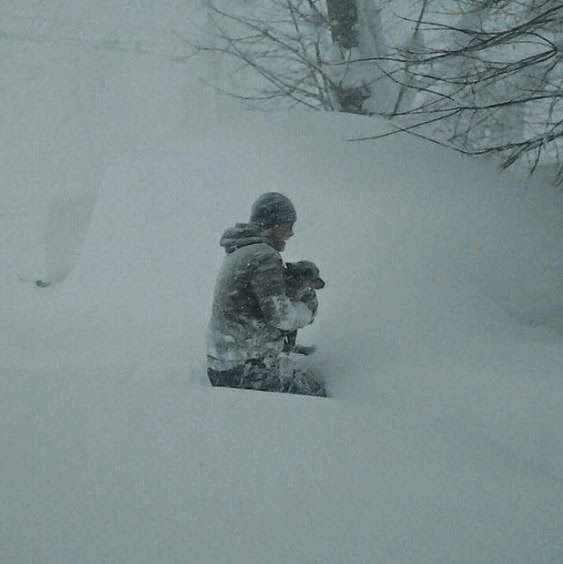 A man holds his dog in the 5+ foot blizzard that buried Lancaster, N.Y., where this was taken, Nov. 18, 2014.
I really hope that man brought that confused little pup back inside right after this picture was taken.
*******


The highest total is 65.0 inches (5'5") 4 miles south of Cheektowaga followed by nearby Lancaster with 63.0 inches. Consider that 3 miles north of Cheektowaga, there was just 2.0 inches of snow. That's a 5-foot gradient of snow in 7 miles -- a distance you could walk in 2-1/2 hours. The KBUF official total remained at 6.2 inches. 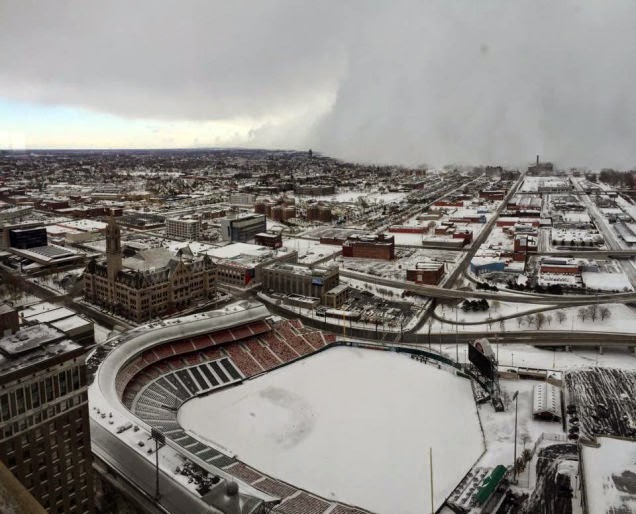 Another image perspective of the wall of snow just south of Buffalo, N.Y., November 18, 2014.
You could literally walk a short distance into a blizzard.
*******

Finally, there is this image ... 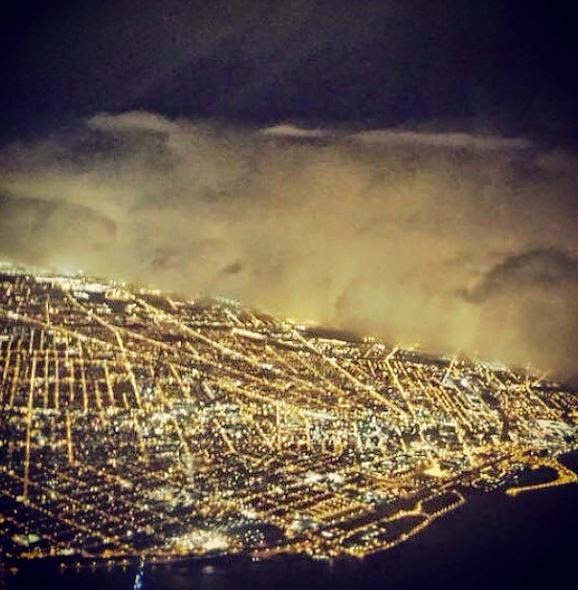 It shows what is a nighttime high-altitude (maybe 25,000 foot?) aerial view of Buffalo and Lake Erie with the snowsquall covering part of the area. It was posted in the above-linked CWG entry and came from an Instagram user "DailyClimb." However, when I looked at that Instagram page, "DailyClimb" said he/she had not taken the picture and it was not sourced.
*******


Gary and I are supposed to visit Buffalo for 3 to 4 days starting on Christmas day. It is a repeat of our visit there last January -- with the intention of seeing snow and this time at Christmas (since a "white Christmas" in D.C. pretty much never happens in any meaningful way -- and spare me any bullshit about midnight dustings or 2 inches of snow out in Warrenton somehow counting).
In addition, Buffalo is actually a rather nice city, especially in its Allentown section near where we are staying, not to mention people are quite friendly.
End of Update and Entry.