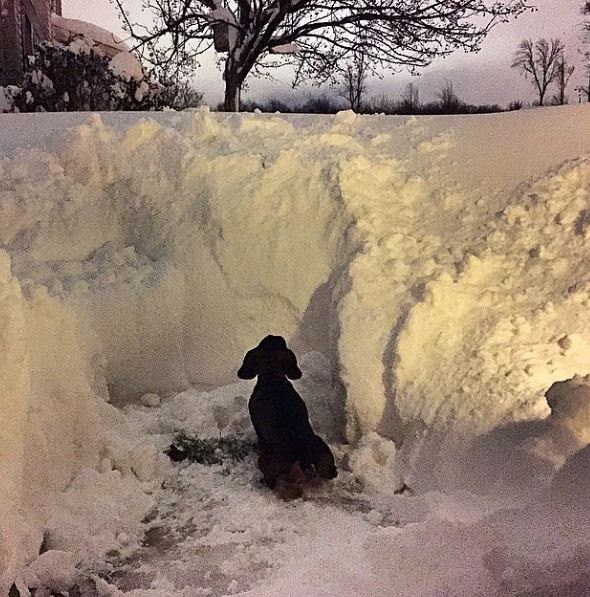 This picture appeared on the Instagram account of user j2marcus living in Hamburg (a suburb of Buffalo) where over 70 inches of snow fell in a four-day period this week. The little dog is named Gracie, who looks quite confused by the massive wall of white towering above her. Source image here.
*******


This is a follow-up entry to the one I wrote about the epic Buffalo area lake effect blizzard this week. Oh, and after a second 2 to 3 foot dumping on many of the same areas that brought selected spots' two-storm / 4-day totals into the 6 to 8 foot range with one spot reaching an hard-to-fathom 88.0 inches of snow, it was in fact an epic and historic event, even if not in Buffalo proper (officially, KBUF had 16.9 inches). 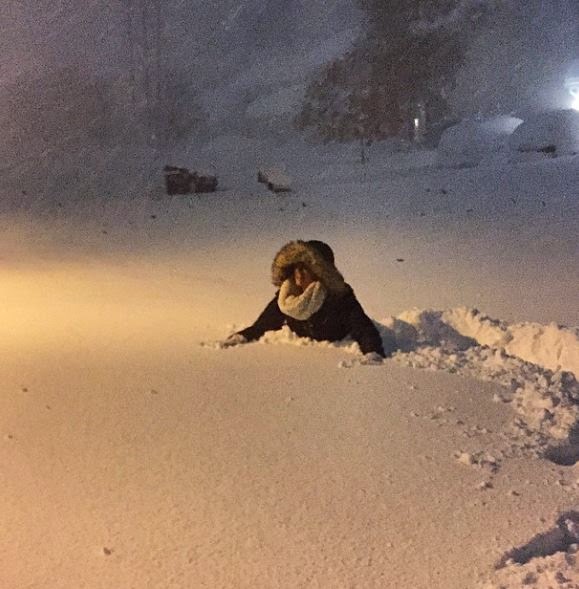 OK, then.
(This is another j2marcus Instagram image, source here.)


This entry includes some additional fantastic photographs -- such as the two above -- that people took and posted on their Instagram, Twitter, or other social media sites that appeared on media outlet sites including this Capital Weather Gang entry. It also includes an online account by a local radio reporter at the usually incredibly annoying WTOP station here in D.C. (I say "incredibly annoying" because the reporters and news readers on WTOP say the station's call letters "W-T-O-P" at least 4 times a minute or, at minimum, approx. 5,800 times a day.
Saying it that many times probably earns Wall-P more money and makes the Washington Consensus crowd happy. 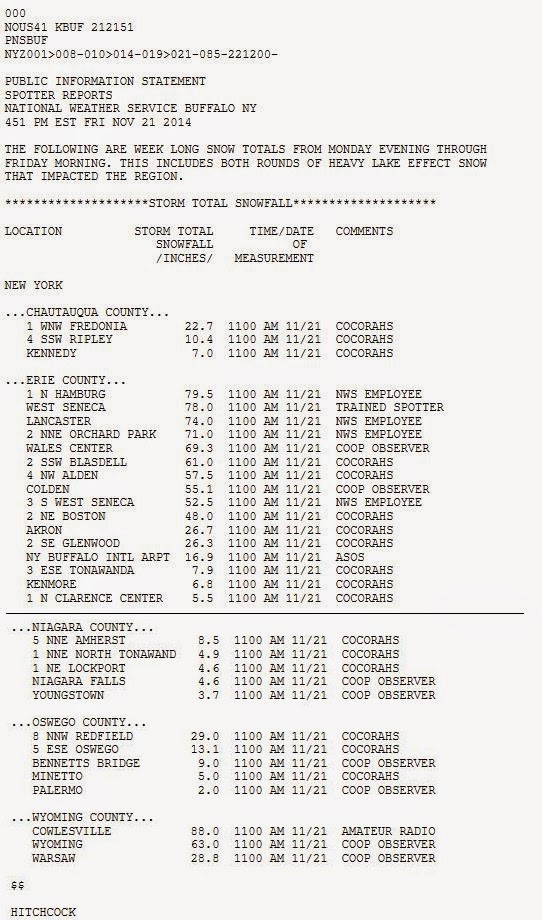 
Dave Dildine took a flight from KDCA to KBUF just before the first blizzard struck on November 18 and his account his here (link embedded): Entombed in snow: a personal account of New York's snowstorm. My co-worker Laura pointed this out to me this morning.
Here is an extended excerpt with pictures and a YouTube clip from the article and its photo gallery plus some images I found on the above-linked CWG entry. 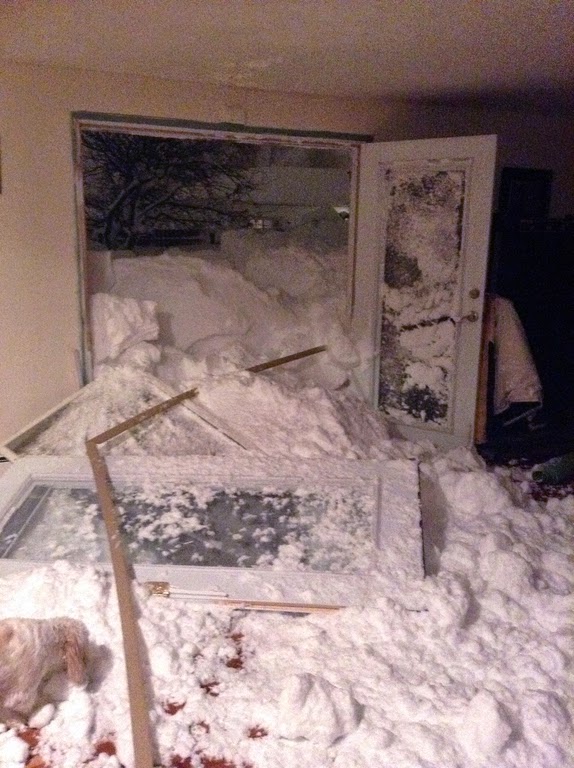 Last weekend, when forecasters began calling for an "incredible lake effect snow event," I decided I wanted to be a part of weather history. On Monday afternoon, my flight from Reagan National Airport to Buffalo Niagara International Airport would fly through the cold front that, hours earlier, had escorted a frigid air mass across the Great Lakes. The record-setting cold set the stage for a localized, but epic, snowstorm ...


The storm's overnight exhibition was extraordinary. As the winds increased, so too did the size of the drifts. And then, in a flash, came the thundersnow -- a half-dozen strokes of lightning in succession at close range. The crack of thunder was deafening, not at all diminished by the onslaught of snow.
Next to the hotel, traffic on the New York State Thruway ground to a halt by midnight. Drivers in vehicles of all sizes became stranded, overwhelmed by merciless snowfall. Cars, pickups and semis were left abandoned in the middle of roads nearby, catawampus and clustered. They were soon shrouded in snow, frozen in time. 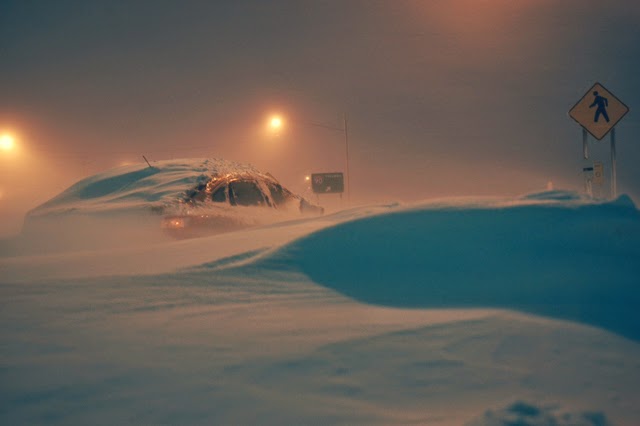 Caption from article: Snow drifts over an abandoned car on a once-plowed Route 75. The lake effect storm left thousands of drivers stranded. (WTOP/Dave Dildine)
(Blogger Editor's Note: I renamed this image file and included a date of Nov. 18, 2014 though it could have been Nov. 17th or, more likely, the wee hours of Nov. 19th.)
*******


By the following morning, visibility was often near zero. My periodic walks became more exhausting as the snow depths increased. It was impossible to venture more than a hundred feet or so from the hotel without fear of becoming disoriented and lost. 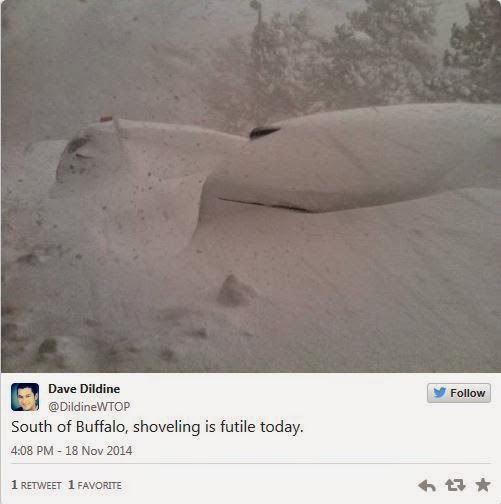 Back at the hotel, the white walls were closing in. Enormous "snow dunes" swelled upward from the parking lot to the second-story balcony. The windows and walls were rimmed in clumps of ice.
That night, the roof of the hotel creaked and moaned under the weight of the snow. This made for a tense, restless sleep. The storm's howling winds were now deadened by enormous drifts that banked up against the walls. 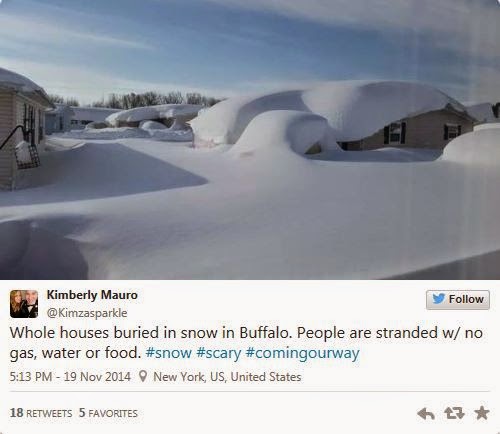 By dawn, the squall had lifted north and weakened. The sun rose over a glaciated landscape. Most human things had vanished; the edges of cars were erased. Houses and larger structures appeared lower, their roofs blunted by sagging cornices made of ice. Vehicles abandoned on the nearby roads were nearly invisible.
With skies already darkening by midday and another several feet forecast, a hectic and exhausting dig-out ensued. In the narrow window of clear weather, I was faced with a labyrinth of road closures between the hotel and airport. A 20-minute drive to Blasdell (south of Buffalo) was a nearly four-hour return trip, with many roads, including the New York State Thruway, closed or impassable. I arrived at the airport as the next round of snow was moving overhead. 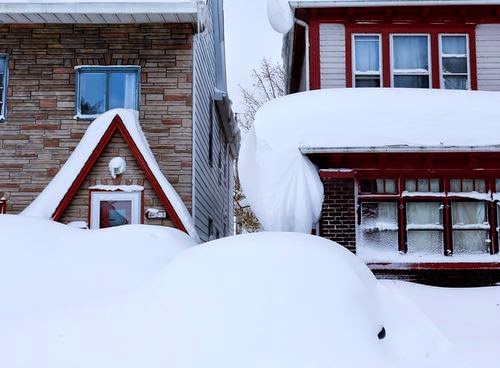 I learned that every city has its breaking point. In Washington, a mere inch of snow during rush hour will cause the grid to seize. But five to six feet of snow in 24 hours, even in the snow-savvy suburbs of Buffalo, is crippling and downright dangerous.
******* 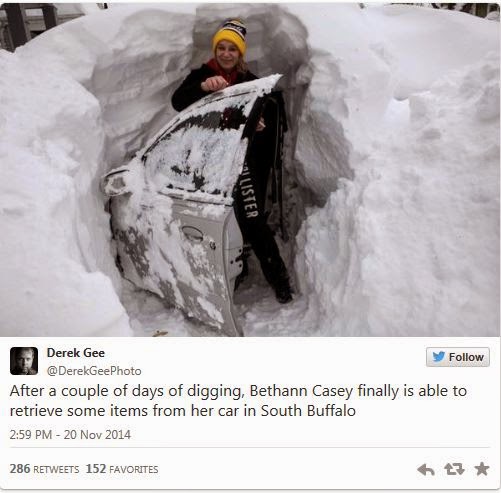 To be clear, the Blizzard of 1977 still stands (and long may it stand) as the worst ever in terms of snowfall in Buffalo proper including wind, cold, and snowfall amounts, not to mention loss of life. Also, to of note, that storm was not a lake effect event in that Lake Erie was already frozen over. However, it featured the strange fact is that much of the snow that fell on Buffalo is believed to have been blown off of frozen Lake Erie rather than falling from a weather system. 29 people lost their lives in that event. (This event as so far a reported 13 fatalities.) 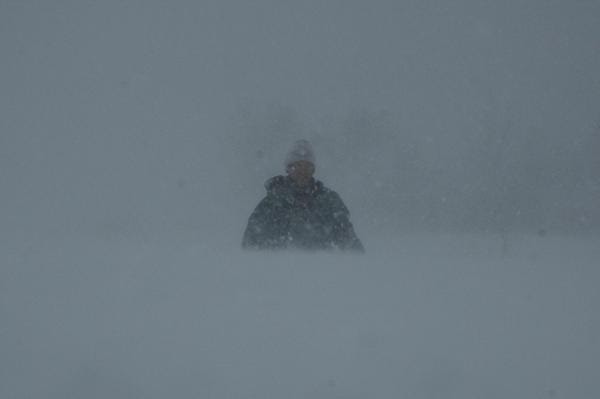 I also wanted to note that a significant warm up and moderate rainfall of about 1/2 inch are forecasted for western New York state by early next week so serious flooding is a possibility. Indeed, the entire western tip of New York state is under a flood watch including the entire Buffalo area. 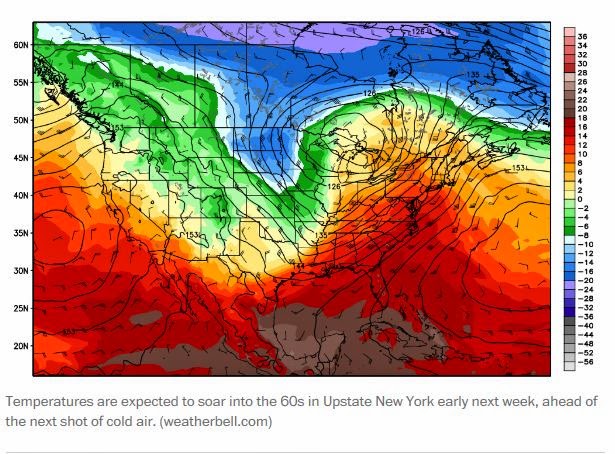 This a forecast of what are probably 850mb temperatures (that's how I noted the image file name) for Monday, Nov. 24, 2014 from WeatherBell.com appearing on the above-linked CWG entry. However, I do not know what model or model run it is taken from and for what exact time it is valid.
*******


Oh, yes, the CWG very annoyingly had this dumb-ass entry about how it is going to get really warm here in the D.C. area -- potentially low 70s Fahrenheit -- by Monday and then cold again with the bogus model chance of some wet snow on Thanksgiving. That's bullshit and horseshit combined.
We aren't getting any snow next week. Full stop. And probably not much this winter.
True, it has been rather blustery and cold this month -- including today with temps just 40F at KDCA with gusty northwesterly winds under mostly sunny skies (and tonight should drop into the 22F to 26F range across most of the area, if not KDCA itself). But it really is a dead-shit pattern. However, it might rain on Sunday as it warms up.
There was some comment by someone saying he or she wouldn't mind a bit of "conversational snow" next week provided "it doesn't seriously impact holiday travel." My comment is underneath it -- it didn't get too many thumbs up, though. Oh, well. (It's at the very bottom of the comment section.) 
Here is what I wrote (yes, as Arcturus24):
We're not getting any "conversational snow" in the immediate D.C. area next week or anytime in the next month. Our "big snow" will be a 2-inch event on, like, Feb. 16th between 5 and 6 in the morning -- everything shutdown -- and it will be partly cloudy and 45F by 2PM that afternoon. Oh, and National Airport will "officially" report 0.4 inches.
"Conversational snow ..." One would have to have a conversation if it actually snowed here. The conversation would be: Gee, how did that happen?
Well, I thought it was funny. And you have to read the "conversational snow" with incredulity and sarcasm. 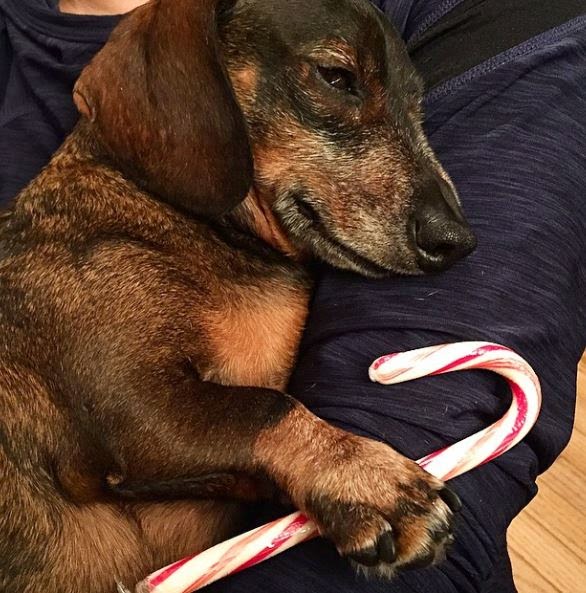 Here is one more Instagram picture on j2marcus's site. I realize it is odd and perhaps a bit creepy to post pictures of other people -- esp. those you don't know -- but this image of Gracie (featured in the lead image to this entry as well pondering the massive snow) was just too cute not to post. This was taken on Nov. 16, 2014. Source image here.
*******


OK, that's all for now. I am meeting Gary and Larry's Lounge and then perhaps going to No. 9. I intend to post a jukebox Saturday night entry tomorrow (before a planned dinner and bar jaunt with Damon this weekend, who is actually available as the wife and baby are away). I then plan to post an entry about the movie Interstellar (which I saw last Sunday) this coming Sunday.
--Regulus