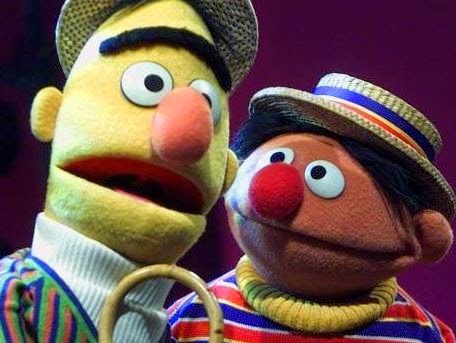 Today is my 45th birthday. (Ditto the Bert & Ernie duo. OK, they're more "in November" than a specific date, but still.)
How bizarre and off-the-wall weird is that??


I had a nice night tonight -- after a sort of stressful day at work involving all the Clean Cities stuff (except, as always, Andrea made it infinitely better than it would have been when I spoke to her). LP, Kristof, and I went to Sur La Place (which I think I've been writing incorrectly as "La Sur Place" in recent entries, or at least in emails) here in D.C. (way out in Palisades).
The food was delicious but the service crappy as the waitress / manager crapped out early on and left her tables to the busboy, who became the waiter. She kinda sucked. The part that really sucked is that she was -- I think -- our waitress the last two times that I was there (once in Sept. 2013 and again in Nov. 2013 for my 44th birthday), and she was great both times. Tonight, she wanted to be somewhere else.
Later, Kristof, LP, and I went to Larry's Lounge, where (1) I did NOT get into an argument with anybody but instead had a good time; (2) had a great conversation with Gary and Kristof about meteorology, gravity (not gravitational) waves; and breaking planetary waves (Kristof is a world-renowned expert in that field); and (3) enjoyed a group shot for my birthday that the bartenders gave. (The latter surprised me since I am NOT ANYBODY'S favorite customer there.) 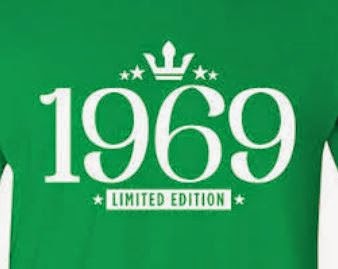 As for my 45th birthday, I tweaked the "About Me" section of the blog to reflect that -- and it was harder than ever to find the damn section.


Oh, yes, I have to get up early, in a way, because the building maintenance man is coming to fix the wall in my bathroom now that the plumbers have come at 9AM (well, 920AM) for two days in a row to replace my toilet and pipes behind the wall.
I am also going to see my mom in Millersville, Md., in her wee trailer (with Ray). And I need to call my dad (who actually texted me tonight for the first time on his own forever). I intend to update the blog tomorrow night from the trailer, in particular, the two entries I have yet to finish. However,  I'm dreading passing through Union Station tomorrow. I'll be back home in my wee dusty efficiency on Friday.
Oh, and the weather issue about would-be accumulating snowfall in the immediate D.C. area is TOTAL BULLSHIT. It's NOT going to snow at all -- not in the D.C. area. To be clear, 17 of the last 20 Capital Weather Gang entries and approx. 3,150 comments (obviously, not all relevant) have been almost uniformly delusional in anticipating accumulating snow in D.C. rather than what will actually happen: A 0.50 to 1.0-inch light-to-moderate rainfall event with a few flakes of snow about 30 miles N and W of D.C. and Baltimore before it ends. YAY! WE WIN!
UPDATED 11:58AM 11/26/2014: 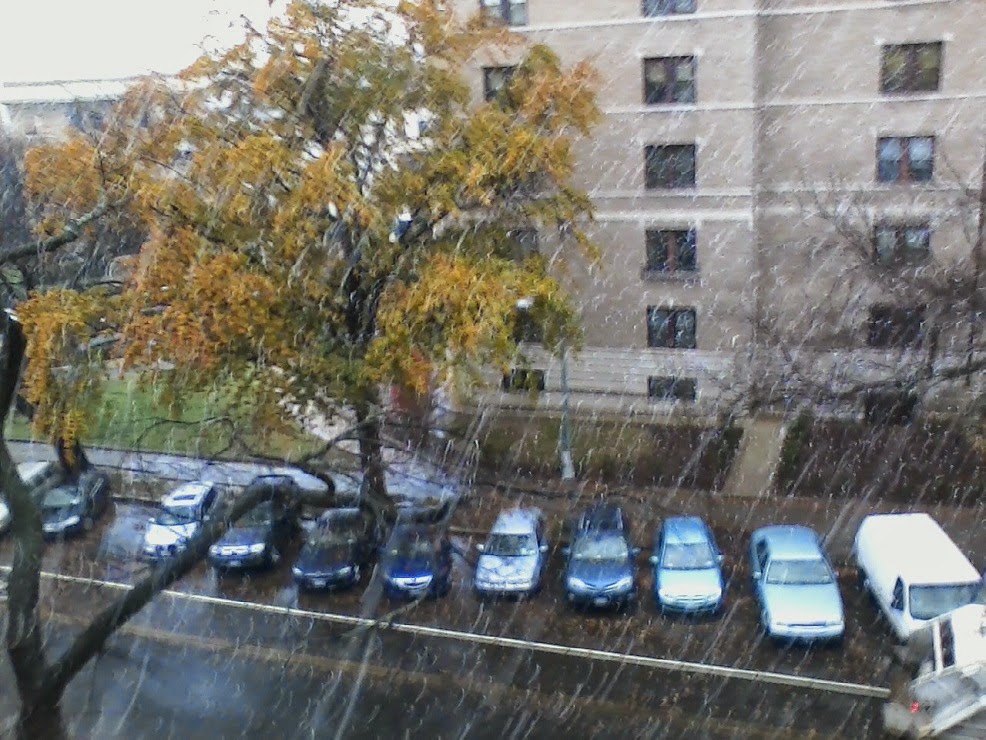 
Well, whaddaya know, it actually is snowing moderately even here in D.C., as I can see outside my apt. window. And the radar looks impressive. I guess I was wrong when I said it wouldn't snow at all in the District proper.
SNOW ON MY BIRTHDAY! 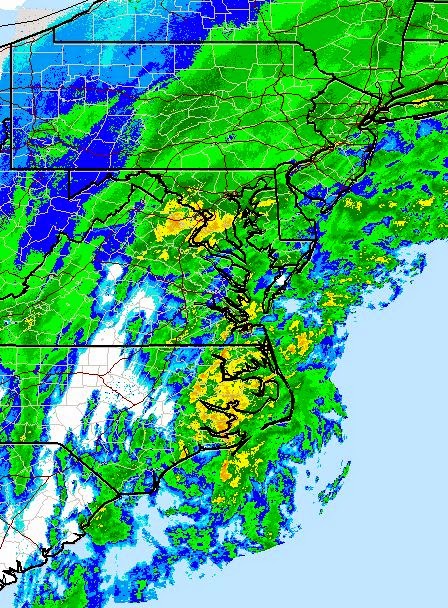 The surface air temp is still 40F at KDCA at the 11AM hour. The CWG commenters are goin' wild. Apparently, it has accumulated to a few inches already way out along the Allegheny Front and into western Maryland.


I'm home this late morning / early afternoon -- trying to work from home. I'm also doing five loads of laundry -- clothes and my deplorable blankets / quilts (I desperately need new bedding). As it is, hopefully, I can get a dryer but one woman in the laundry room looks like she wants to use every dryer all day.
You know the sort: A young woman who puts three dainty garments each in five dryers and a bathroom mat in the sixth one (oh, and the seventh / final dryer is out of order). Then she leaves them in there for hours so that you're stuck -- and woe unto you if you try to move them. You have the whole Salon.com Feminazi crew down on you as a monster pervert (never mind you're a gay 45 year old man) and responsible for every atrocity this side of World War II.
Changing subjects, there was a fellow here earlier fixing the drywall in my bathroom now that I have a new toilet. I just need the tile guy to finish the wall. It has been a three-day ordeal. 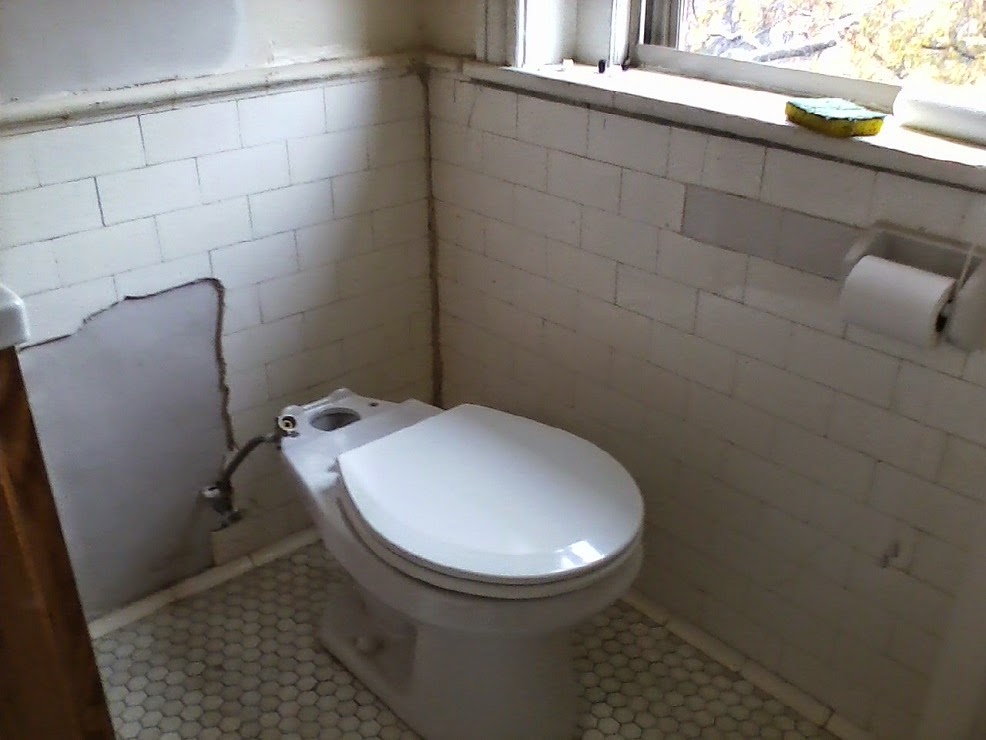 
I have to get over to Millersville later today. I need to take a MARC Penn Line train. I think I'm just going to go to New Carrollton rather than even attempt to navigate Union Station.
OK, that's all for now. Interestingly, the nanosecond picosecond femtosecond that I expressed interest in the falling snow, it stopped.
End of update and entry.