So my work schedule changed a bit and I had time to post an entry tonight.
So I would like to post this YouTube clip of that ugly incident at Dallas - Fort Worth International Airport (Gate C30) last Thursday, Oct. 23rd, in which a likely very drunk, foul-mouthed, fat, young redneck is threatening and berating a (likely) gay man in a hot pink shirt with homophobic slurs. (you'd really have a hard time coming up with a better hateful archetype).
This entry contains a series of frame grabs from the YouTube clip. (Is it me or are we always analyzing frame-by-frame filmed events in Dallas??) 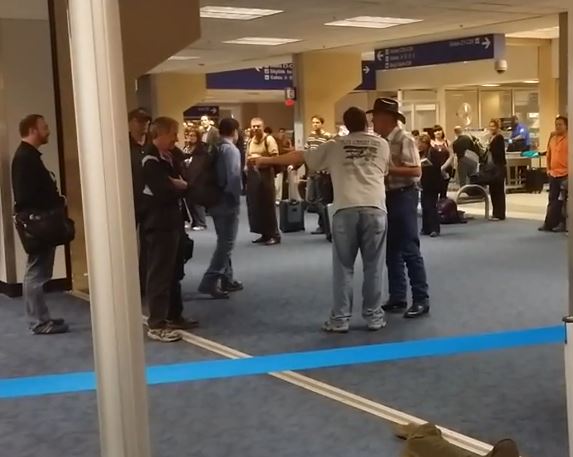 The situation quickly escalates -- and, while certainly not helpful, I don't think it was decisive in the attack the fact that the man being verbally abused and then attacked is filming him with his Smartphone.
A man in a dark Stetson or cowboy hat of some sort tries to talk to the man. 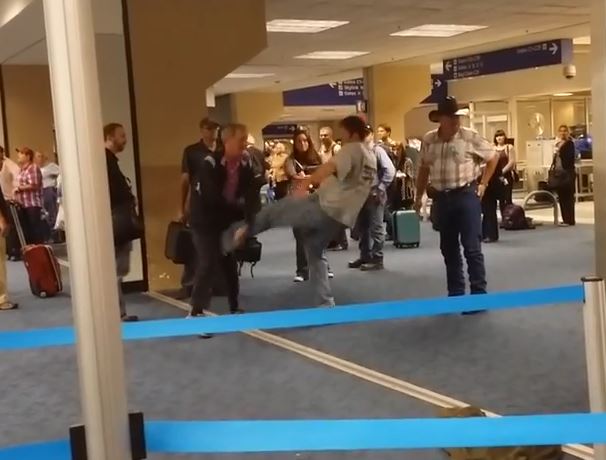 "Yeah, but what are you upset about?" the cowboy-hatted man asks in a Texas and/or Southern accent (I can't quite tell).
"He's QUEER! This FAGGOT right here! THAT'S what I'm upset about!" the man shouts. 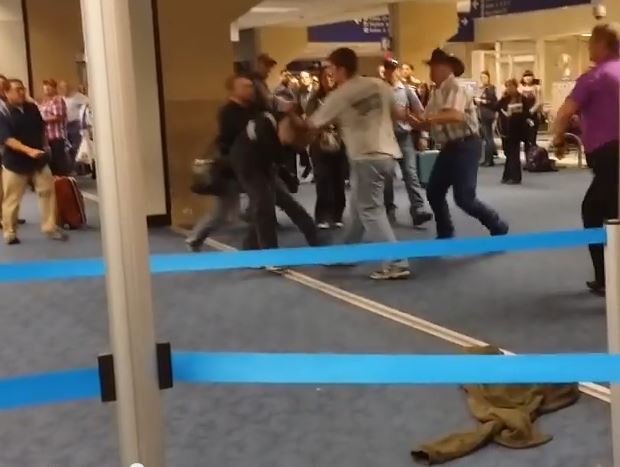 There is the usual homophobe's torrent of filth about sticking objects you-know-where. At that point, the redneck pretty brutally attacks the smaller man, which triggers an instant melee with the attacker almost instantly subdued. One of the men subduing him breaks his ankle (you can hear the "crunch" sound at 1:22 -- it's kind of awful). 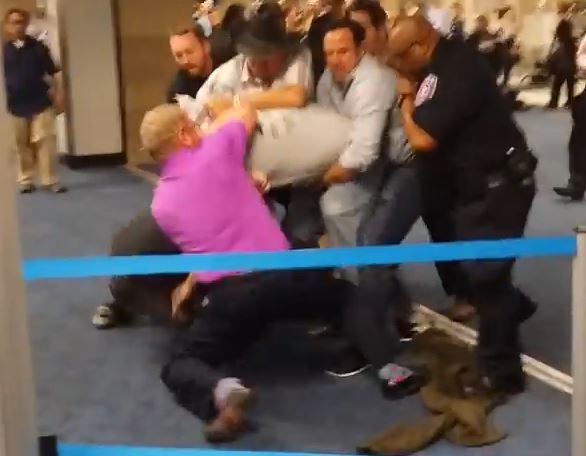 While there are four passengers and a police officer in all who take down the man, it is the guy in the cowboy hat who really stands out, at least in how I am interpreting matters, because as he subdues the young man, taking him down, you hear him bellow in his powerful baritone:
"NO WAY, MOTHERFUCKER!! YOU AIN'T DOIN' THAT FUCKIN' SHIT, YOU MOTHERFUCKER!!"
That should be the quote of the week. Now I'm not sure if he just meant attacking anybody, or if he meant it because he recognized the nature of the attack. If it is the latter -- which makes his good Samaritan deed of defending a stranger being physically attacked -- really awesome. Why? Because that man also looks to be quite a Texas good ole boy himself who probably doesn't interact with a lot of gay men in his life. 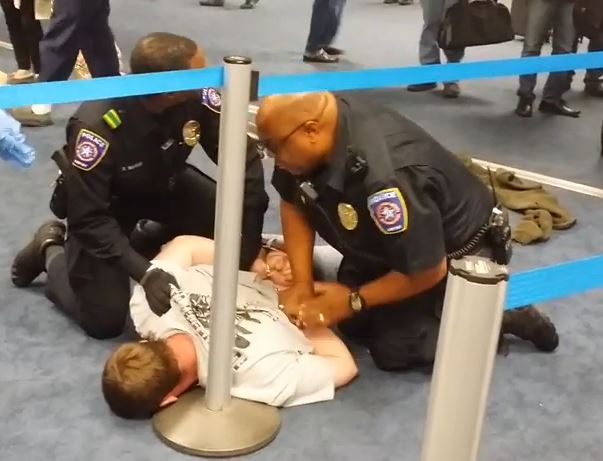 The rest of the tape is just the man subdued on the ground, occasionally thrashing and threatening violence (though he is now handcuffed and immobile) to at one point appearing the be passed out, and then even grinning demonically. He tries to get the two black police officers to be on his side only to verbally attack them.
Oh, and as mentioned, one of the other men who helped take him down -- ironically, also in a hot pink / fuchsia polo shirt -- breaks his ankle in the fracas because by the end, he is in a wheelchair and the paramedics are being called because he cannot walk. Again, you can hear it at 1:22. 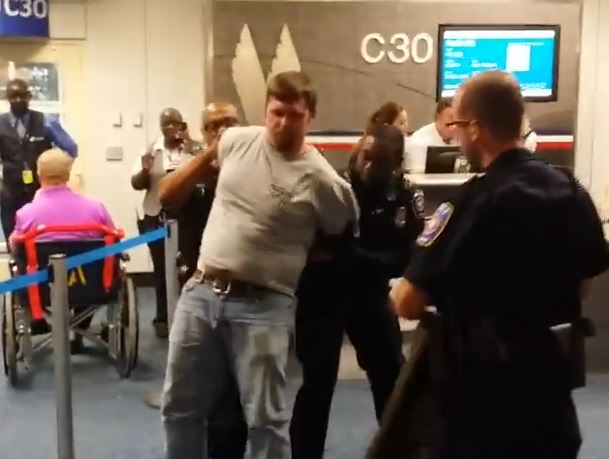 For their part, the police just need to get him up, which they do. This brings us to the second great part o the video -- watching that fat fuck be practically frog-marched past all those people, his nasty t-shirt nearly coming off so you see his blubbery body.
Quite humiliating and totally deserved. (The man hasn't been identified yet by the Dallas police.)
The whole incident was filmed by a red-bearded young man named Andrew Kennedy -- who appears to have some professional background as a local TV reporter (unsure where) and who was at DFW airport with his (beardless) brother (Neil?) and parents. He then interviewed his brother, who tried to be philosophical and end on a hopeful note about the country, it's criminal justice and social services system (not sure about either) and the young man tackling his demons..
The story has been picked up extensively by the media and was on Yahoo News all day. 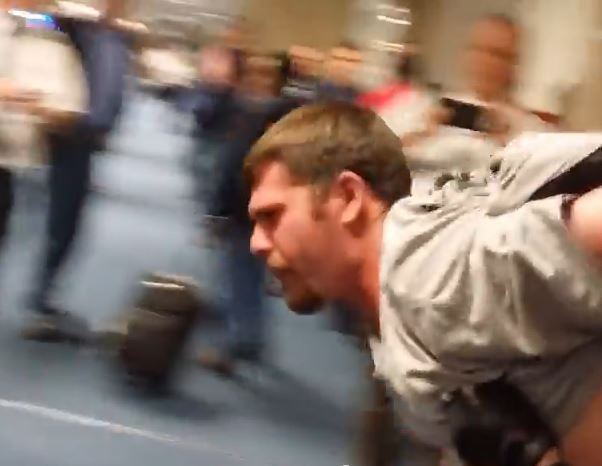 Living in the uber-socially liberal D.C. Bubble, as I do, where about quarter of the male population is gay and the rest of the men are young and Millennial gay-friendly (and ditto virtually all the women), I forget that bullying and violence and hate such as this still exist. 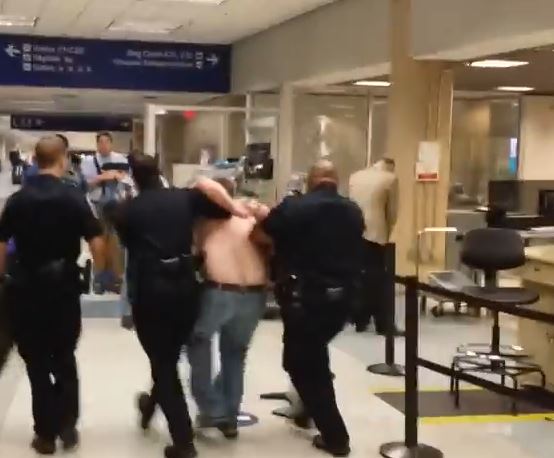 
I lived there during parts of 1980 and 1981 when I was 10 and 11 years old. I stayed in Copperas Cove and later Killeen (where I attended 5th and 6th grades), and I was certainly in Dallas (and DFW Airport) a number of times. My love of meteorology was really ignited in Texas. To this day, this gay, Social Democratic-minded Northerner has a real soft spot for Texas, a state that is really a multi-faceted country in its own right. (And all my BA case work in Texas allowed me to interact with the governments of so many little towns and counties across the Lone Star State, and almost uniformly a positive experience.)
As a brief update, I had a good gym work out following a busy day at work. As noted, my work schedule changed a bit with an extra day on the Arizona BA report. For tomorrow, I'm probably just going to No. 9 after work. Oh, and speaking of how gay is D.C., and a gay safari for socially tolerant straight Millennials, I am totally avoiding the annual, incredibly annoying high-heel race. On Wednesday, Brett and I are tentatively having dinner though I'm not sure where to go.
OK, that's all for now. I probably won't update this blog until Wednesday or Thursday.
--Regulus
Posted by Regulus at 1:38 AM