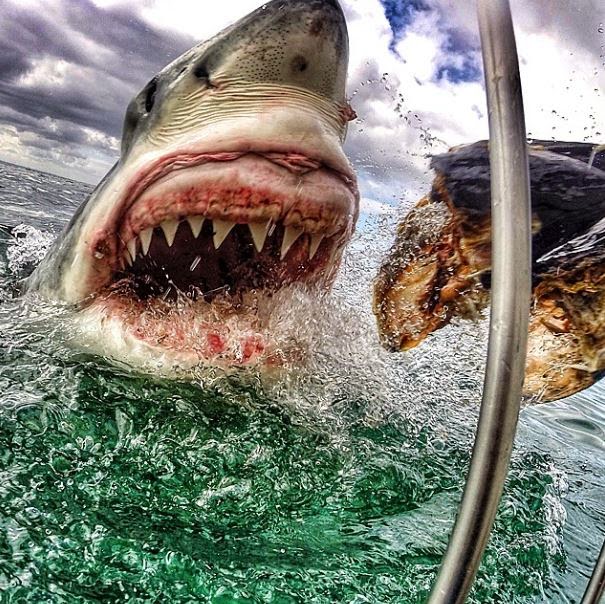 SHARK!
This astonishing photograph was taken by Amanda Brewer of New Jersey in the waters just off South Africa in Mossel Bay in (I believe) September 2014. The picture was taken with a GoPro camera that Brewer had just purchased and, as she described in these two articles, the picture was taken by chance.
The great white shark in this photo was being lulled by the chum in the picture. Brewer was in a partially submerged shark cage when she snapped the photo and posted it on her Instagram account where it truly "went viral" in terms of popularity.
Brewer is an elementary art school teacher in New Jersey who was volunteering over the summer in South Africa with the eco-tourism and animal conservation organization White Shark Africa.
******


Last week, U.S. astronaut Gregory Reid Wiseman aboard the International Space Station (ISS)snapped this incredible photograph of Super Typhoon Vongfong as it was near peak intensity over the Philippine Sea of the Western Pacific Ocean. 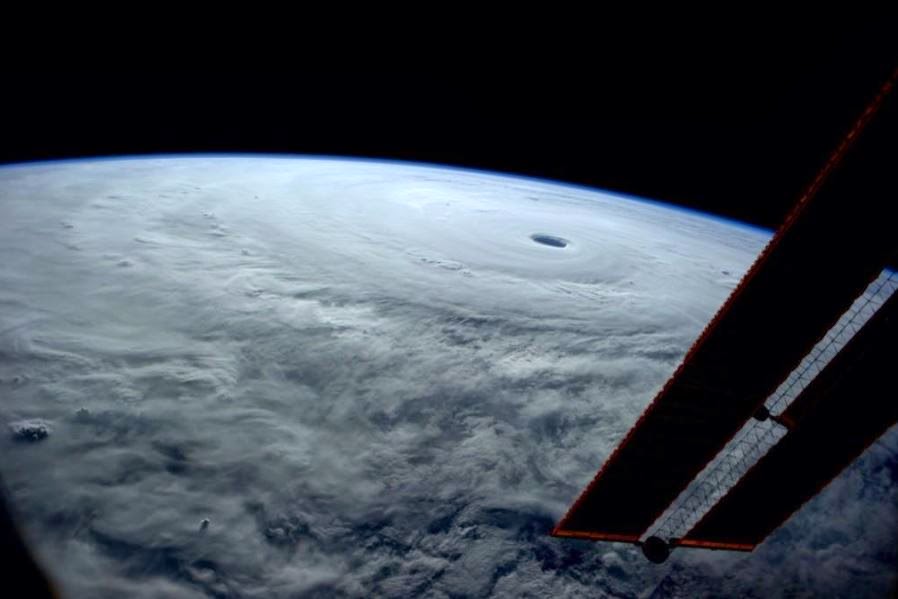 The photo was taken at 0354UTC on October 9, 2014 right at Vongfong as the typhoon was nearing its peak intensity probably around 20N / 130E.
Wiseman posted this picture on his Twitter account. (To be clear, the Typhoon's name is "Vongfong," not "Vongfang." The name apparently means "Wasp" in Cantonese.) This CWG entry has some great photos of Vongfong.
Vongfong curved northward -- avoiding the Philippines -- and weakened substantially before making landfall in southern Japan causing some damage and injuries on Okinawa. Thankfully, it was not a replay of Super Typhoon Haiyan that devastated parts of the Philippines last year and killed about 6,340 people. 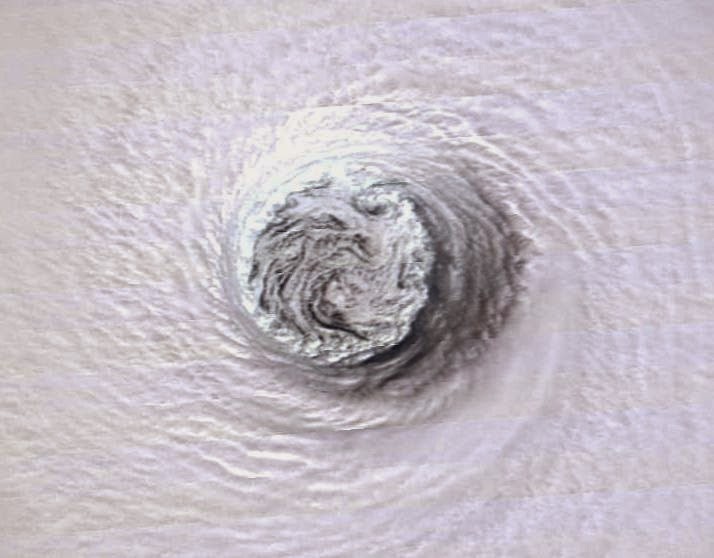 Looking RIGHT DOWN the eye of Super Typhoon Vongfong in a NASA image taken on Oct. 9th (or 8th).
This is about as perfect an eye for a tropical cyclone. You can even see the "stadium effect" of the eyewall clouds. The ocean itself is mostly not visible because of what I imagine to be chaotic, fractocumulus clouds tearing about wildly. Seas in the eye and eyewall must have been heaving easily 50 to 70 feet and chaotically frothing. 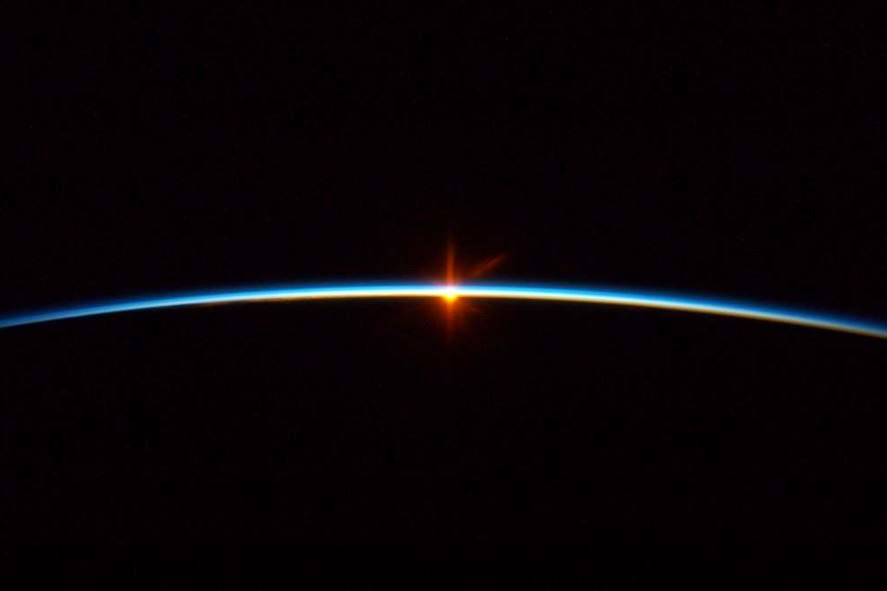 Wiseman also took this wonderful picture of sunrise over the limb of the Earth as seen from the ISS on Oct. 9, 2014.
He posted that picture on his Twitter feed as well. It was probably taken over the western Pacific around the time he took the typhoon picture. Astronauts aboard the ISS experience 16 sunrises / sunsets per calendar day. Wiseman is part of the Expedition 40/41 crew aboard the ISS.
*******


Finally, I wanted to post this amazing and awful pair of pictures of the sudden eruption of Mount Ontake in central Japan on the border of Nagano and Gifu prefectures on September 27, 2014. The eruption killed at least 55 people with rescuers combing through ash-blanketed moonscape left behind by the eruption.
The pictures were taken by a man (see below) who died in the eruption just moments after he snapped these images ... 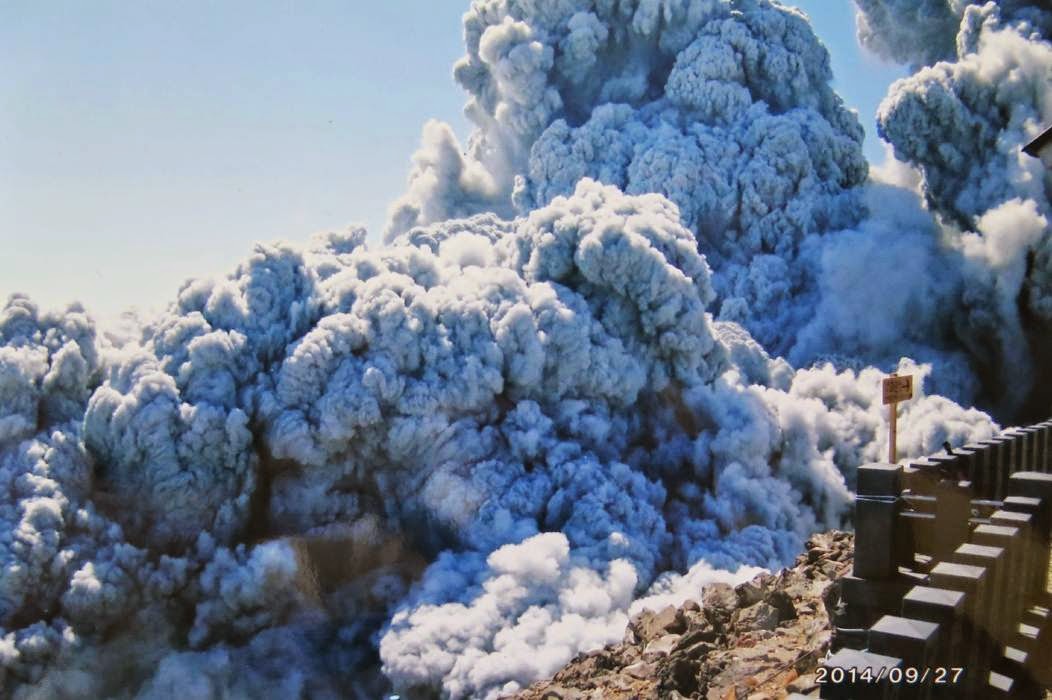 The sudden eruption of Mount Ontake with a pyroclastic flow approaching the Ontake Shrine atop the mountain. This photo and the one directly below was taken by Izumi Noguchi just moments before he died. His camera was found in the ash and his wife, Hiromi, gave the images to Kyodo News Service. Another image by Izumi Noguchi of the unstoppable pyroclastic ash flow approaching the Mount Ontake Shrine atop Mount Ontake on September 27, 2014. Noguchi and the two others pictured in this photograph would all be dead within a few minutes. And it's not a pretty way to die. It's a horrible way to die.
This Yahoo News article has a photo gallery of images with explanations.
*******


I guess it's just too cliché to say but I'll say it anyway: Nature can be astonishing, amazing, and incredible. And it its awesome power, awful in its complete amorality.
--Regulus