Senate Odds, House Sure Bets, and Imperial Ends -OR- Let's Get This Election Over Already 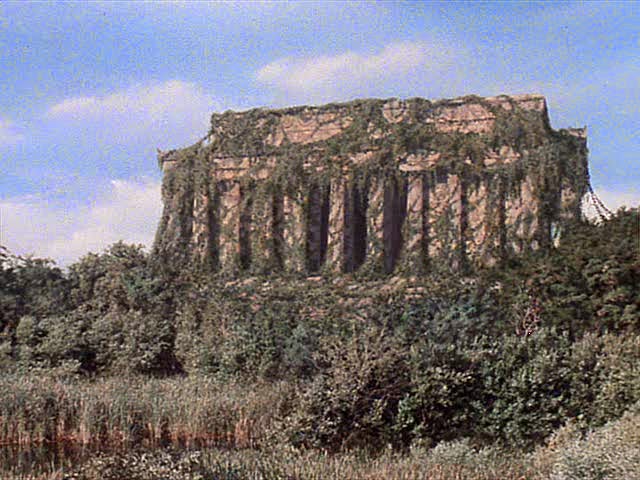 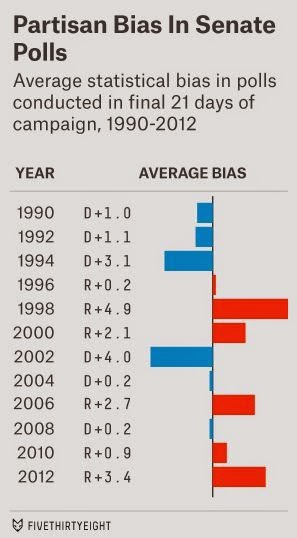 So at this point, it looks likely to very likely to a statistical certainty* that the GOP will win the Senate, although Nate Silver had a very useful piece on why the polls this particular year are vexing and the situation still uncertain. I note here that Paul Waldman of The Plum blog on the WaHoPo.com took issue with Silver for saying Dems are claiming polls are systemically "skewed" in the manner the GOP made this claim the weeks leading up to Romney's 2012 loss.)


*The WaHoPo Election Lab model just seems stupid, though, on the face of it in terms of its Senate statistical certainty.

The New York Times online Upshot blog has an entry on this topic of polling uncertainty this year as well. Nevertheless, it seems increasingly likely the GOP will win just enough seats -- which are disproportionately in Red states this go around -- that the combination of the usual shit midterm turnout by Democratic constituencies who are all holed up in their urban and severely Republican-gerrymandered districts in a year characterized by deep apathy driven by fatigue and frustration with (as I see it) such a severely broken political system due to GOP insanity, overclass rapacious plutocracy, and corporate Democratic pussiness.
Updated 8:35PM 10/17/2014


Rather than posting another entry on this depressing subject -- and it is depressing for Democrats and progressives, so much so that I'd like to link to this Salon piece by Joan Walsh, an uber-politically correct pundit who is NOT on my must-read list, but I liked what she wrote there -- I just want to update this entry with a link to a piece by Sam Wang in The New Republic (link embedded): No, Republicans Aren't Guaranteed to Win the Senate. Here's Why. (Of course, they probably will.) Wang runs the Princeton Election Consortium operation and its model presently forecasts a 52-seat Republican majority or a pick up of 6 seats. 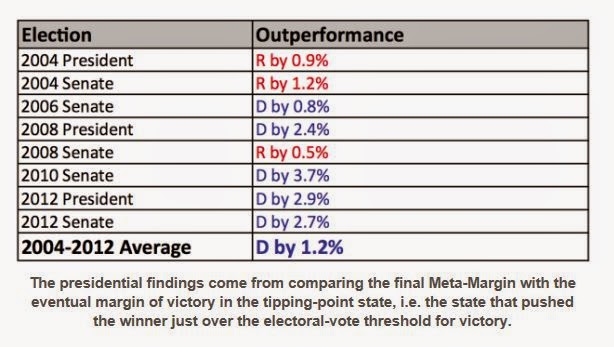 Princeton Election Consortium: Percentage difference between the meta-margin of the final polls and the actual election results -- with the presidential years showing the results in the "tipping point" state -- for the 2004 - 2012 elections. It shows that Dems outperform by 1.2% for the entire period.
In the Senate case, the Senate Meta-Margin is (per Wang) "defined as how much the final vote would have to differ from polls in key states to create an exact toss-up for control of the chamber." The current Senate Meta-Margin (as of Oct. 17th) is R+1.2% (i.e., the final votes would have to differ by 1.2 percentage points in the direction of Democrats for an exact toss-up 50-50 outcome). Interestingly, that's exactly what the PEC R+1.2% meta-margin now shows.
End of update. 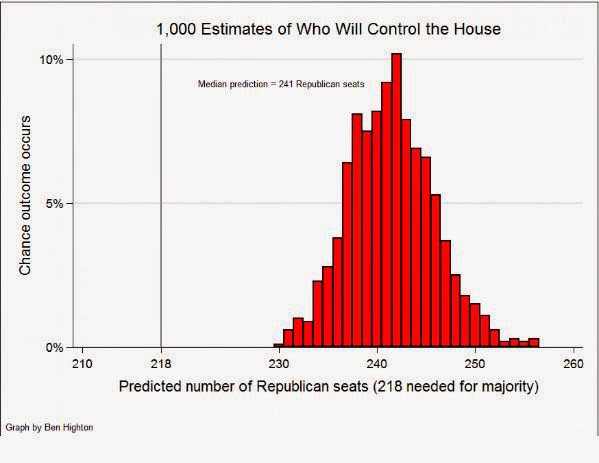 As for the House, as the above histogram of 1,000 model estimates of who will control that chamber shows, it is beyond a lost cause, and it will remain so at least until the outcome of the 2020 Census when America's inexorable demographic changes HOPEFULLY start to catch up to the House district structure. Even then, it could be take until the 2030 Census.
Gallup sees the 2014 election as similar to the 1998 and 2002 elections (story here). 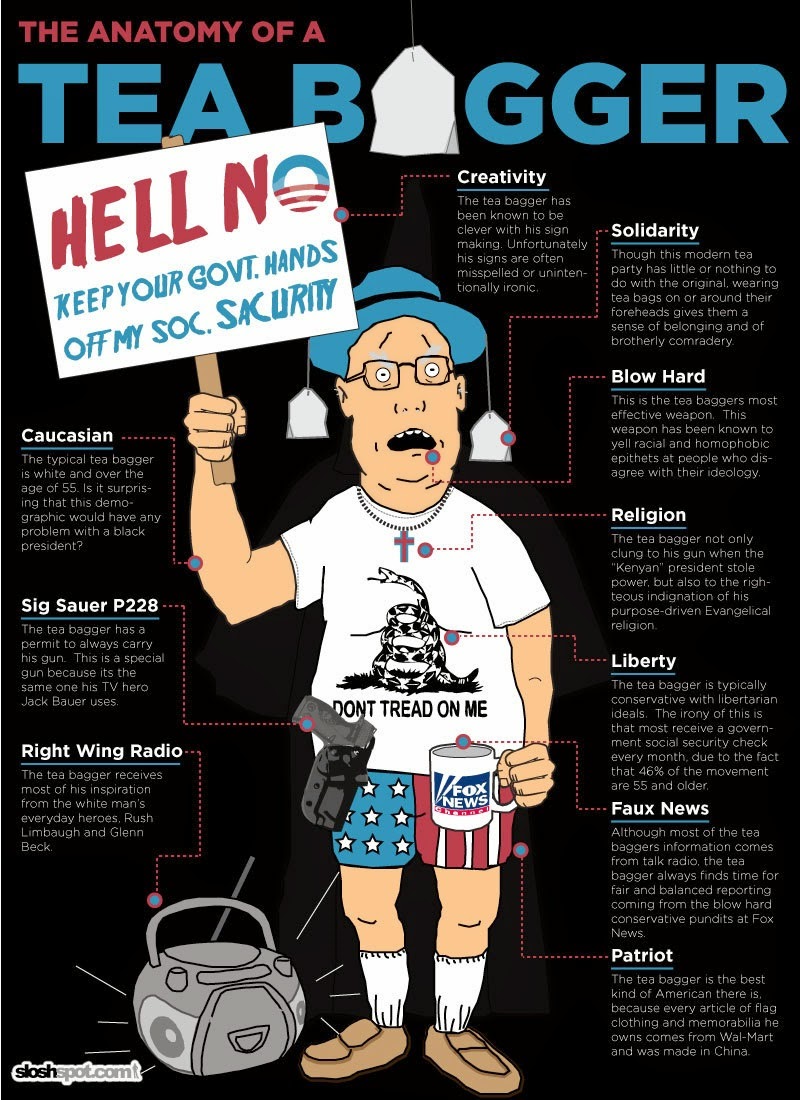 One must download and open image for readable version.
*******


Nevertheless, the Ebola cases in Dallas have created a "Perfect Storm" in which the Fundie End Times and Teabagger base ... to the extent there is a difference between those two key GOP voting blocs in an era in which American politics have reverted to a mid-19th Century regionalism, especially regarding the GOP ... 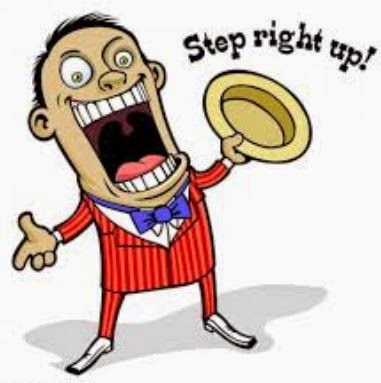 ... are being whipped up into a Fox News / Rightwing Hate Radio frenzy of vintage American paranoia, idiocy, and race-based carnival barking by the for-profit media / entertainment complex and associated GOP infrastructure in order to gin up hysteria to ensure its base votes.


Greg Sargent, also of The Plum blog, calls this the Doom-and-Disease Chorus.
The idea is that Obama is causing the Ebola outbreak because it somehow helps him and his Muslim, Socialist, Atheist Kenyan agenda. Or something like that.
Also, never forget the weird cleanliness fetish of those on the right. 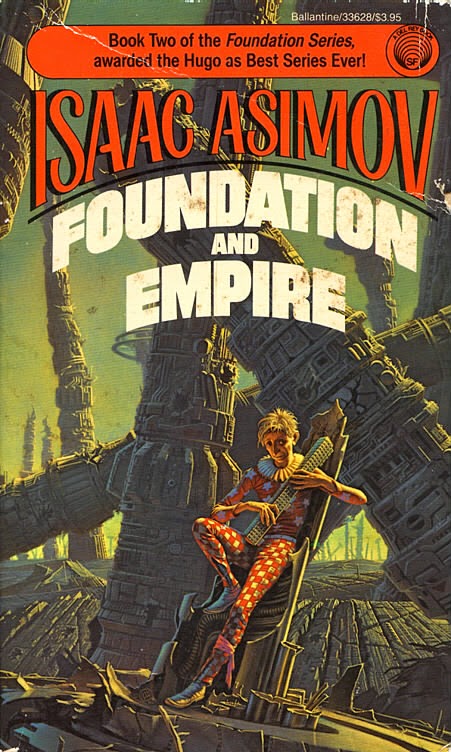 As for President Obama, he's just kind of hapless these days and running out the clock on his term even as his approval ratings continue to plumb new lows. (I do agree with Paul Krugman on how history will judge him.)

Regardless, the Empire really is in decline.

OK, that's all. I might try a weather update entry now. Actually, no. It's too late at night now. I'll try to do so tomorrow.