SURFING @ 1000 FRAMES PER SECOND from Chris Bryan on Vimeo.
The above video was posted on Andrew Sullivan's blog yesterday in this entry (link embedded): Mental Health Break. It's so worth watching -- the exquisite slow-motion video and sound quality of tumbling, crashing ocean surf with graceful and highly acrobatic young surfers riding and "tubing along" these waves. And, of course, the somber orchestral music that starts about 2 minutes into it makes it sublime.
This entry was right after this entry that is really worth a read (link embedded): What Do These Midterms Mean?
Sometimes Andrew Sullivan's blog makes me happy. I have to tell him that the next time I see him about and about in the neighborhood.
*******


It's Halloween night, not to mention a Friday night, so I'm expecting D.C. to be a real Millennials shit show. As for me, I'm not feeling very well. I've had a migraine headache for part of the day owing to being really stressed out. And updating this blog is just another source of stress. As it is, I cannot blog for very long, and by that I mean no more than 20 minutes. This entry will just focus on a weather update since the weather will be sort of interesting this weekend. 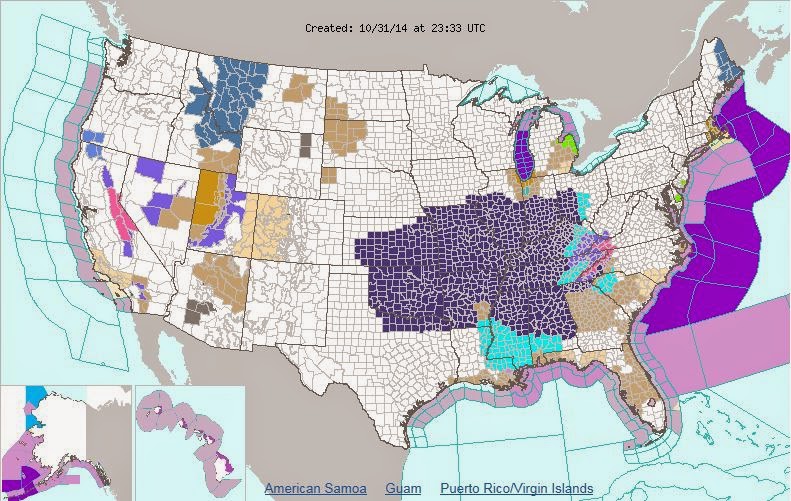 NWS advisories map for the United States valid 2333UTC (7:33PM EDT) Oct. 31, 2014. Click on image for larger version.
The dark / navy blue are all freeze warnings for various counties. (Once you get to the western U.S., advisories are no longer by county by my similar climate zone, which in turn is a function of topology, hydrology, and other geophysical similarities. The deep pink / magenta are winter storm warnings -- both in the High Sierra and the highest parts of the southern Appalachian range (see below).
*******


The weather this evening here in D.C. proper is calm, mostly cloudy, and a bit chilly tonight with temps. around 55F. However, there is an active weather pattern shaping up as an unusually vigorous upper level low / shortwave behind a strong frontal boundary drops NNW to SSE from the Great Lakes to a position tomorrow along the South Carolina coast*, at which point cyclogenesis will occur off the Outer Banks -- and too far to bring the D.C. area any "sensible weather" other than rain showers associated with the frontal passage itself. (A weak surface low at this hour is over South Carolina. It marks the location to which the upper-level vortex is being drawn.)
*At that point, it will reach Sen. Lindsey Gay Graham (R-Gay) and gayily prance out to sea. This was yesterday's 500mb relative vorticity and geopotential height forecast at hour 60 from the 6Z 10/30/2014 name valid at 18Z (6PM EDT) Nov. 1, 2014. It is a frame grab of one of a looped set of images that were prettied up by WeatherBell.com and appeared on in this CWG entry.
The forecast hasn't really changed since then.


There is actually a winter storm warning in effect for the highest portions of the Great Smoky Mountains and the southern Blue Ridge for as much as 15 inches of snow in a bit early season snowstorm. (That's big for anytime of the year there.)
There is rather cold air behind it and there is a freeze warning broad swath of the middle Mississippi River and Ohio River valleys, across parts of the Midwest, and into the Great Plains. This includes all of Missouri. It will mark the end of this year's growing season. There are frost advisories in effect down to the Mississippi Gulf coast.
Here is D.C. it might drop to 32F (though probably not at KDCA itself, of course) by Monday morning. 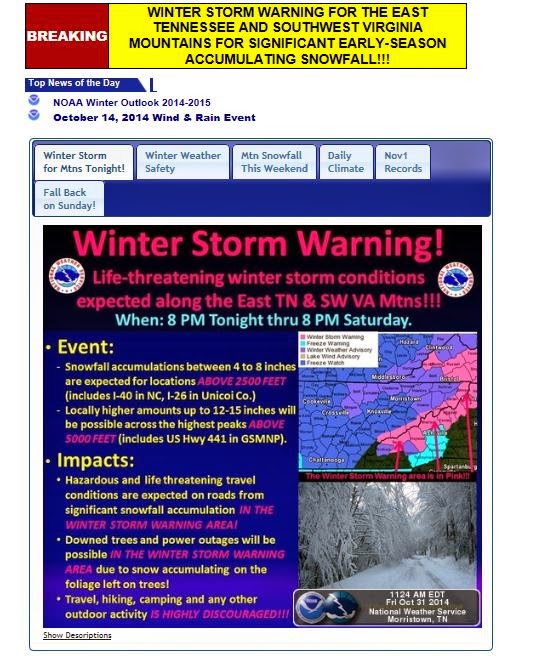 Here is a screen shot of the Morristown, Tenn., NWS Forecast Office (MRX) website at present.
It looks like something you'd see on Weather.com mixed with a bit of Nancy Grace, complete with suggestions of AMBER alerts and all. Well, actually, AMBER alerts DO go through the NWS system.
*******


Of note, the NNE to SSW air trajectory from this shortwave over Lake Michigan is actually bringing rain and snow showers into the Chicago area now that will turn to all-snow later tonight.
The national composite radar mosaic loop shows the swirling vortex dropping, as described by others, "like a bowling balls" with the center right about near Cincinnati at present. 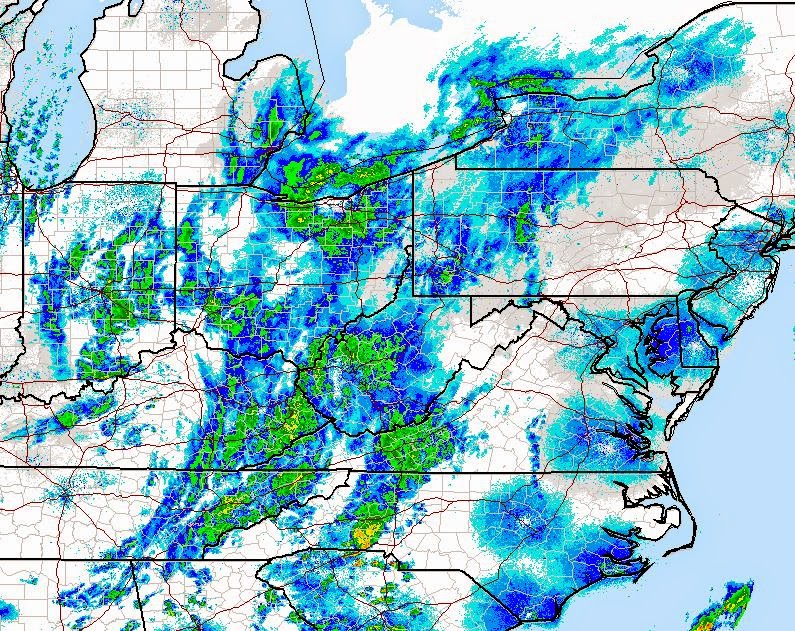 
One last weather item: A Pacific storm with elongated frontal system came ashore on the U.S. West Coast today with moderate rainfall across parts of central California and snow forecasted in the Sierra Nevada Mountains tonight. 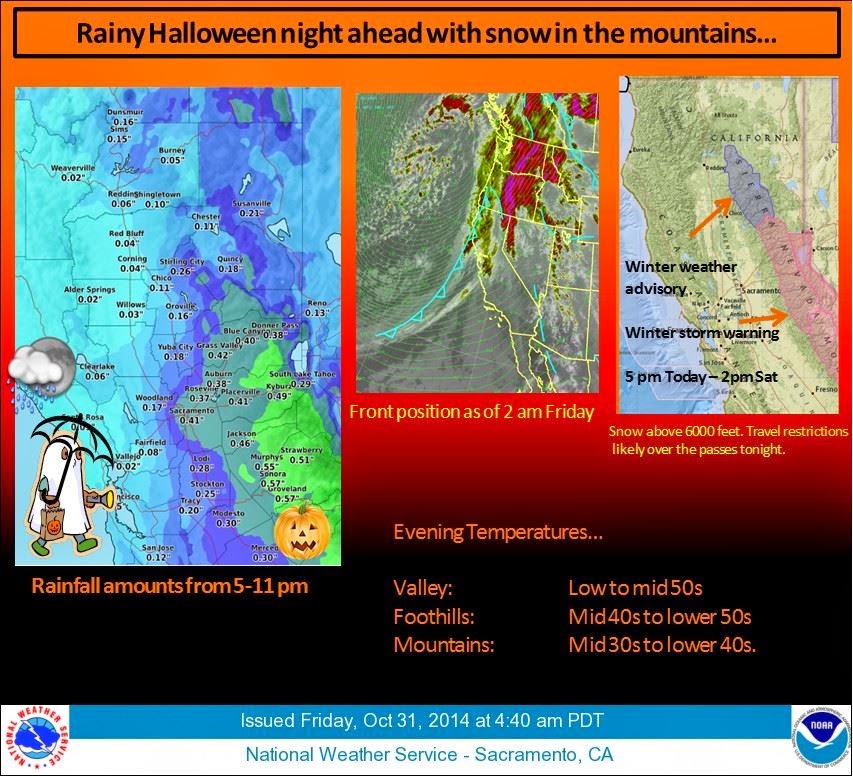 Here is the info graphic from the Sacramento NWS Forecast Office (STO) website earlier today that I thought was sort of cute for Halloween. Click on image for larger version.
*******


OK, that's all for now.
Gary invited me to a house party involving one of the Larry's Lounge bartenders over on Swann Street but I was not specifically invited by that person himself, so we shall see if I really am invited.
Later, I intend to go to No. 9, though while writing this, I also had a text from Andrea to meet up.
As for tomorrow, well, I really should just go the gym. However, I am tempted to go on that Clarendon Halloween-themed bar-crawl with Andrea, Imara, Nick, Jake, et al., although sans any costume. I don't do costumes. Actually, I'm not really sure at this point.
That's all for now.