Brief Thursday Night Update -OR- Polly, Stuart, Jan, and Me 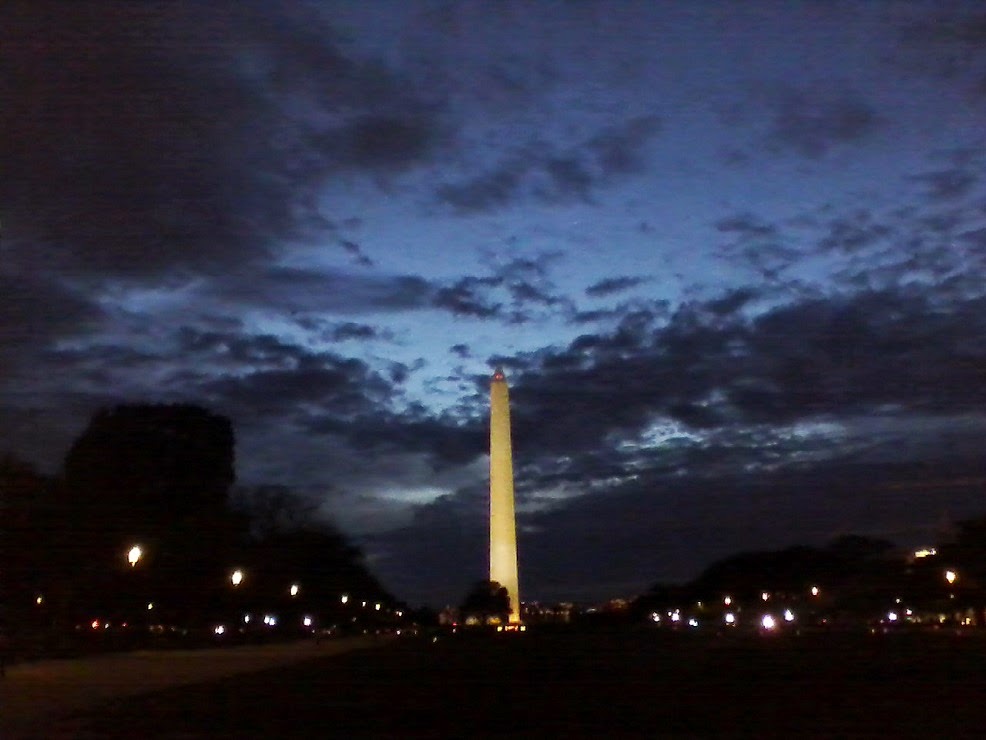 The Washington Monument seen at dusk through my crummy flip-open cellphone camera from about 5 blocks away on the National Mall, Washington, D.C., 7:07PM October 9, 2014.
I was walking home from work -- from L'Enfant Plaza to Dupont Circle (see below).
*******


So I had planned for multiple entries for tonight and tomorrow and over the weekend. However, tonight I skipped the gym -- I went three of the past four days including a collective 19 miles of jogging, 3 hours of weightlifting, and 45 minutes or so of swimming plus a few minutes of sauna and steam room, so I think I'm OK skipping it tonight and tomorrow night. 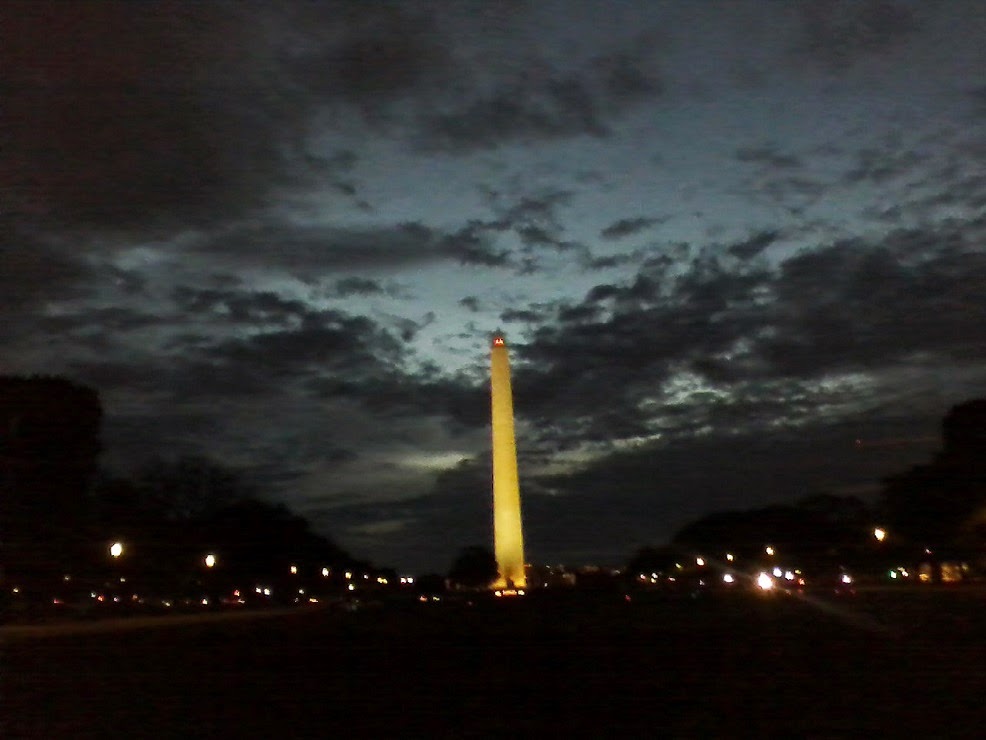 A second picture of the Washington Monument seen at dusk through my crummy flip-open cellphone camera about 15 seconds and 10 feet away from about the picture above as seen from the National Mall, Washington, D.C., 7:07PM October 9, 2014. The "exposure" -- such as it is with that camera -- was also slightly different (and not really under my control).
*******


Instead, I walked home from work, stopping first at Elephant & Castle on Pennsylvania Avenue and then at No. 9 before walking home.
I had a beer (Stella Artois) and a French onion soup and garlic bread at E&C and then two glasses of wine at No. 9. On the walk home, I called my mom and then we talked for an hour and 20 minutes. Indeed, I was home for a good hour of that conversation.
Now I am home watching reruns of The Golden Girls. At this precise moment (11:24PM), it is that annoying episode "Blind Ambitions" with actress Polly Holliday (now 77) of Alice and Flo fame and featuring the (former?) actor Stuart Fratkin, about whom I wrote in this entry nearly four years ago and who read it and posted a comment (under the name stiles2). 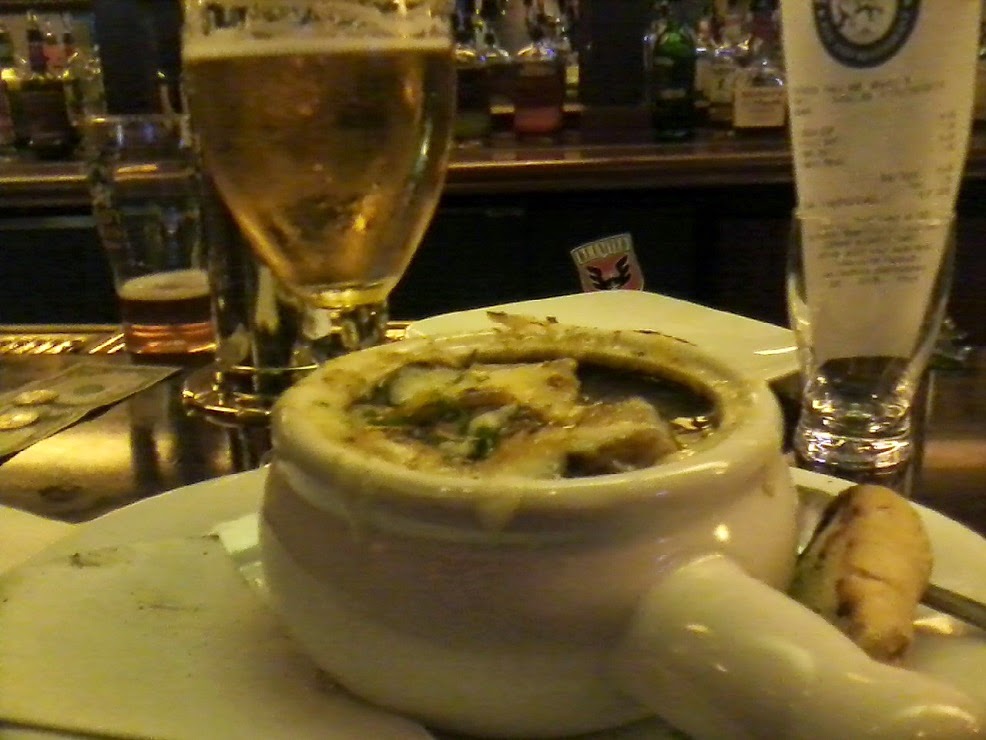 French onion soup dinner and beer at the bar at Elephant & Castle on Pennsylvania Ave., Washington, D.C., 7:24PM October 9, 2014.
Two points: One, yes, I know posting picture of food that you yourself are not eating never looks appetizing; and, two, there is another, newer, less enjoyable Elephant & Castle in D.C. near Farragut West.
*******


That was odd. And the closest by "degrees of separation" I will ever come to talking to any of The Golden Girls themselves. Well, at this point, only Betty White is left. 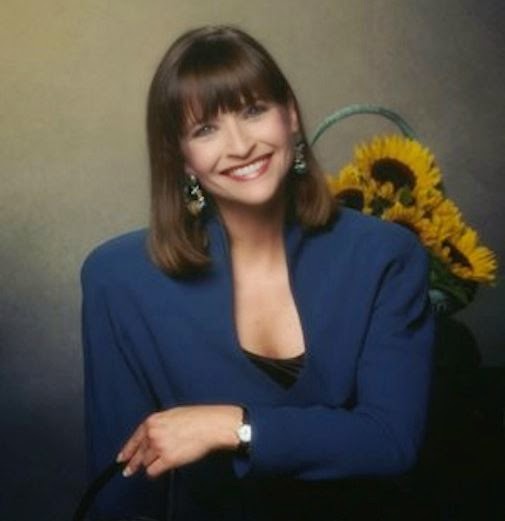 Jan Hooks
Speaking of those gone (and in this case, too soon), actress and comedienne Jan Hooks died unexpectedly today at age 57. This is very sad. The woman was a riot. I don't know much about personal life, though. 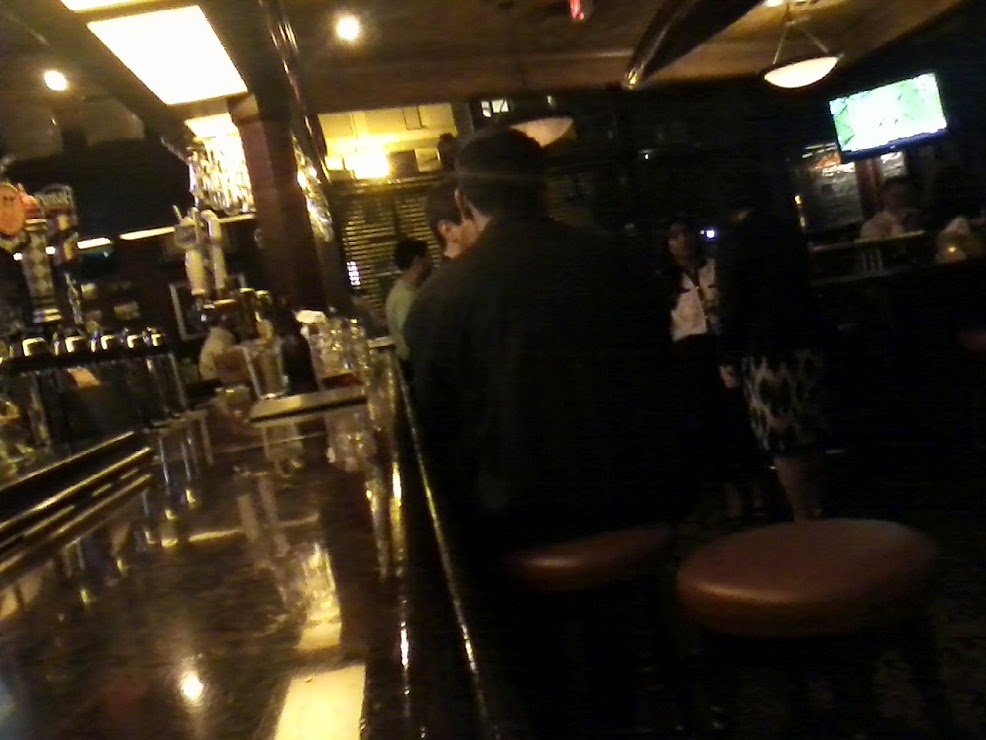 
I made a bit of dinner, and now I think I am just going to go to bed. Actually, tonight I ate too much junk food.
As for tomorrow (Friday), I was supposed to go to the National Press Club with a colleague -- a colleague with whom I haven't gone to a happy hour in over 2 years -- but it sounds like she might be cancelling it.
OK, that's all for now even though there are so many entries I want to post. . G'night.
--Regulus
Posted by Regulus at 11:58 PM