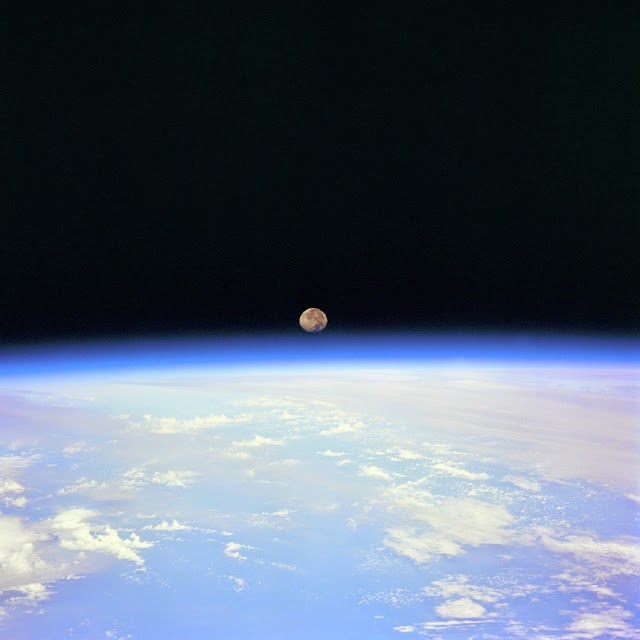 
Well, I was going to take the computer home tonight but looking at the radar ... 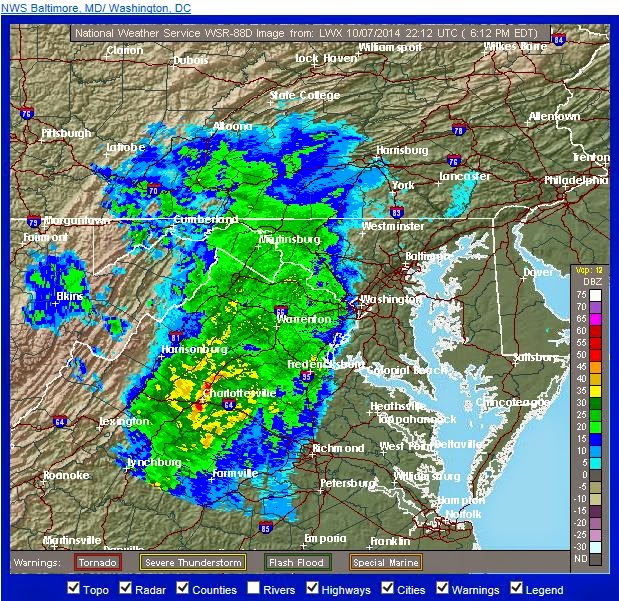 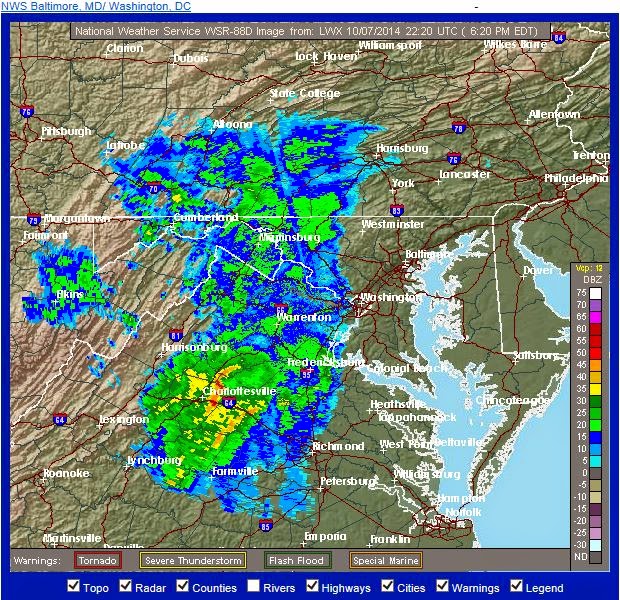 ... and even in base reflectivity mode (Sterling NWS radar in enhanced base reflectivity, 6:20PM EDT October 7, 2014) ...
... I think I will just leave it at work tonight, especially since I don't have an umbrella.
As it is, I am not going to the gym tonight. I had two consecutive days of full three-part workouts. Tonight, I'll just stop by No. 9 for a couple drinks (walking home) and then go home and watch television. Actually, if it is gusty and rainy, maybe I'll stop by Elephant & Castle on Pennsylvania since that is on the way home as well.
A few weather and astronomical items ... 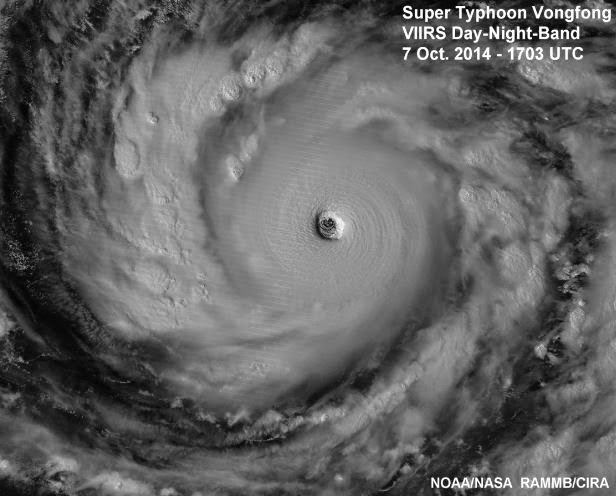 Super Typhoon Vongfong seen by NASA's Visible Infrared Imaging Radiometer Suite (VIIRS) at night, 1703 UTC October 7, 2014.
Yes, the monster typhoon (with its near-perfect inner "buzz saw" cloud pattern is being illuminated strictly by moonlight in this image, which is frickin' way cool when you think about it.
*******


Here is a Capital Weather Gang overview of tonight's forecasted gusty, showery / squally frontal passage. It also contains an update on Super Typhoon Vongfong in the western Pacific Ocean, though there is also a previous entry that contains more detailed information.
The storm's satellite-estimated winds are 155 knots / 180MPH sustained and they are forecasted to reach 190MPH and its pumping up 50 foot waves over the open ocean (based on  JTWC warning #21). The central pressure earlier today was put around 908mb as the tropical cyclone underwent explosive development in the previous 24 hour period. 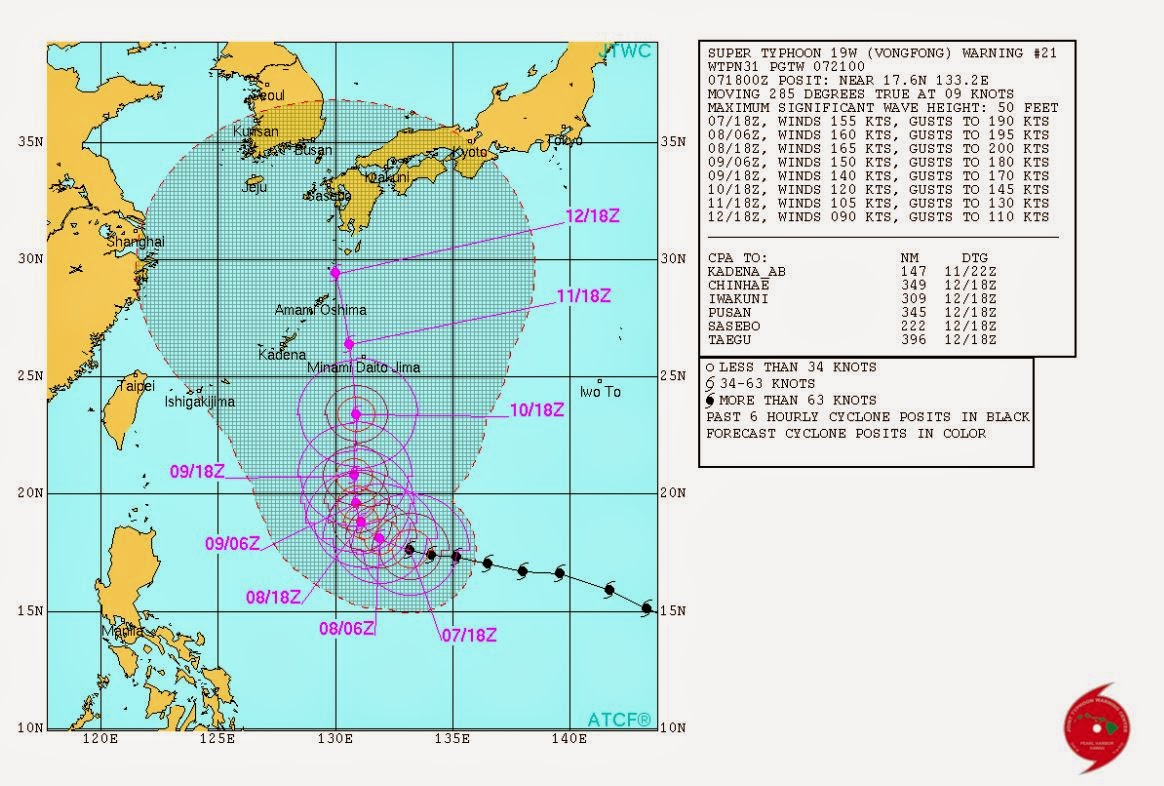 The track and intensity forecast for Super Typhoon Vongfong from the Joint Typhoon Warning Center (JTWC), warning #21 (click for larger version). (The CWG entry above has warning #20; I got the more up-to-date one here, though this link will change with time.)
*******


Presently, Vongfong is just a shade below monster Super Typhoon Haiyan in November 2013 -- except Vongfong is not forecasted to slam into any populated areas until Saturday / Sunday when, in considerably weakened form, it reaches the southern islands of Kagoshima Prefecture and perhaps the southern Japanese mainland. Super Typhoon Haiyan killed 6,000+ people in the Philippines and caused catastrophic destruction in places.
The CWG also had a good entry (link embedded): Climate scientists explain why record-high Antarctic sea ice doesn't mean global warming isn't happening. Sorry, GOP. It's not global cooling. 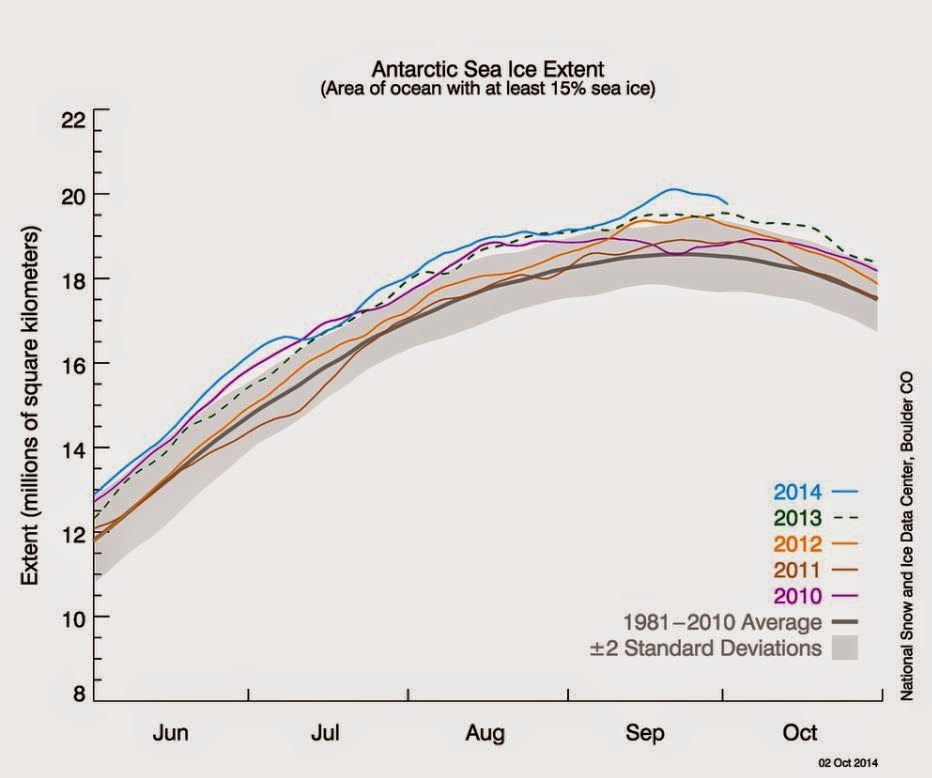 
NASA Goddard scientists provide their input. This is an area of active study, namely, the question of why Antarctic sea ice has been increasing while the Antarctic ice sheet itself in places undergoes a gradual but unstoppable collapse -- even as the Arctic continues to undergo its long-term decline in sea ice coverage. 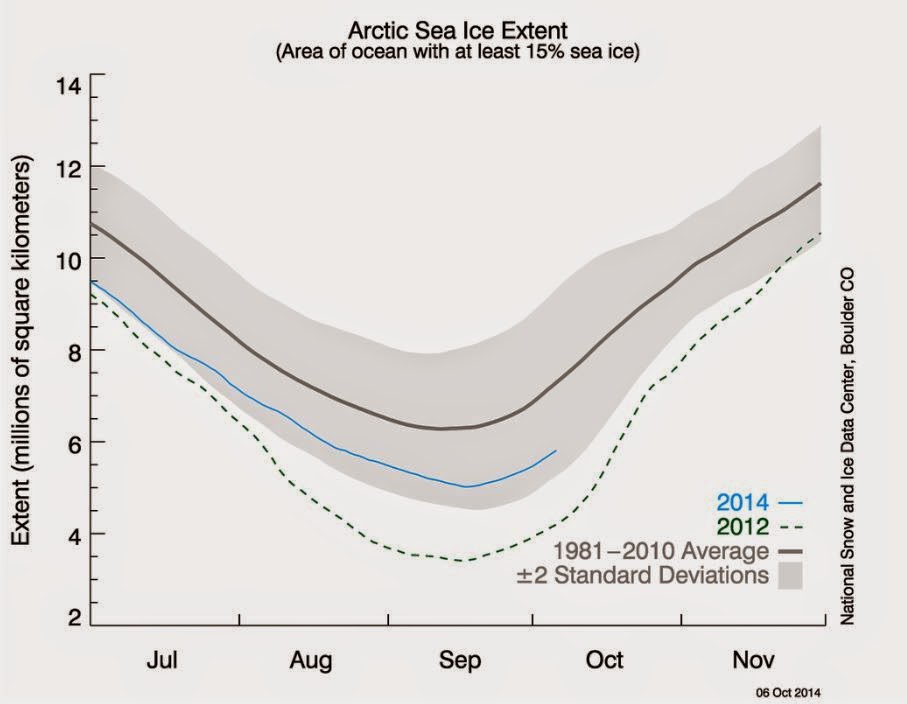 For tomorrow morning ... A special kind of lunar eclipse for folks in the mid-Atlantic region ...

Finally, see this CWG entry on tomorrow's sunrise selenelion ("horizontal") lunar eclipse for folks in parts of eastern North America including the mid-Atlantic region -- a rare event when the Sun rises and the Full Moon sets with the latter in total Earth (Terran?) eclipse. The "syzygy" geometry of this at sunrise (or sunset) should be render it impossible but owing to atmospheric refraction, the solar and lunar disks appear in the sky when they are not "really" there.
Skies should be clear by morning, or at least no more than partly cloudy. Maybe I can see it from my apartment (5th floor / facing west).
OK, that's all for now.


Oh, yes, on a political note (but posted without commentary), read this Heather Parton Digby Salon piece on Mark Halperin. It's a riot.
That really is all for now. My next planned update will be for late Wednesday night or early Thursday.
--Regulus