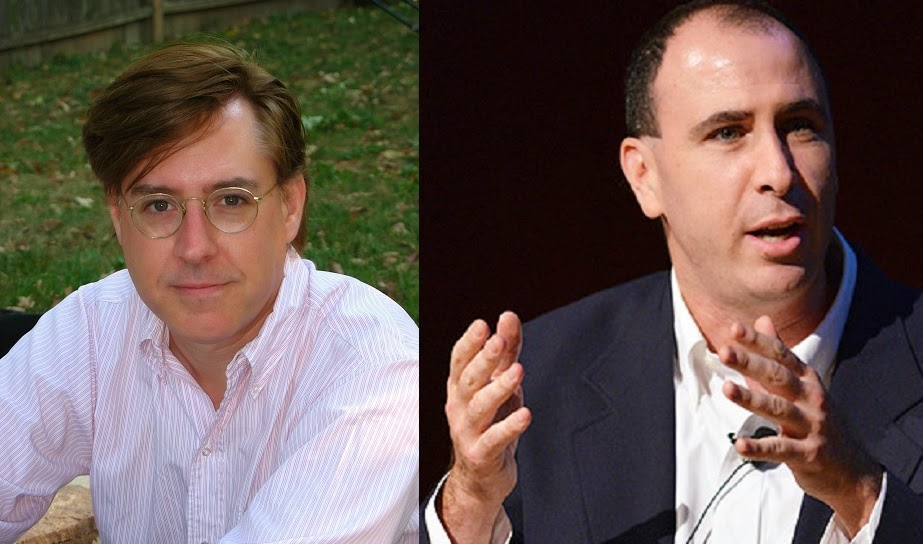 This entry about a disagreement between my favorite political writer, Jonathan Chait, and author / columnist Thomas Frank. I've written before about the differing world views between Chait and Frank -- are we in a fundamentally optimistic or pessimistic time in the Age of Obama / early 21st Century America.
The last six images are snippets from the Sept. 2012 study "Beyond Guns and God: Understanding the Complexities of the White Working Class" by the Public Religion Research Institute (PRRI). That study is linked here and below.
************* 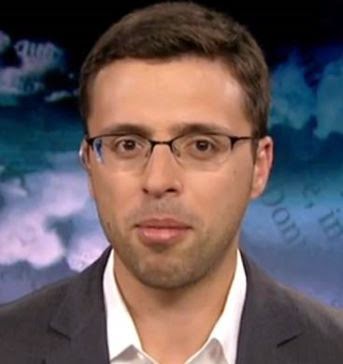 So I was going to note this useful and engaging Salon column by Thomas Frank (link embedded):
All these effing geniuses: Ezra Klein, expert-driven journalism, and the phony Washington consensus


The sub-title / descriptor (or whatever that line that follows a headline is called) is: Ezra Klein and his data brigade think political science will save us. But expert opinion is why we're in this mess.
The column was triggered by an annoyingly triumphalist Vox.com column by Ezra Klein (link embedded): "How political science conquered Washington", as well as a Nate Cohn piece in the New York Times-hosted Upshot blog (link embedded): "Why Democrats Can't Win the House".
Yeah, yeah, we know, we know ... It's gerrymandered out the wazoo in favor of the GOP so that it severely underrepresents urban progressives and Democrats in general ... 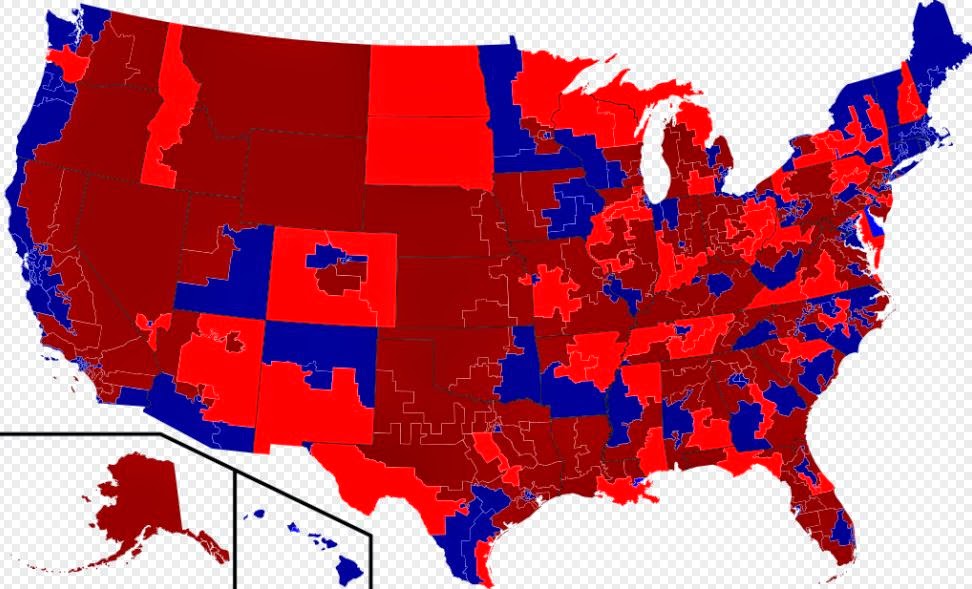 
I thought / think that Frank raises some important issues that I really can't do justice here since any excerpt will quickly and necessarily be too long. Basically, he is arguing two things:
First, more generally, the idea that wonky policy experts haven't all along been in positions of influence -- including "The Best and the Brightest" that helped get us into Vietnam -- is nonsense (and, I think, he convincingly demonstrates that point). 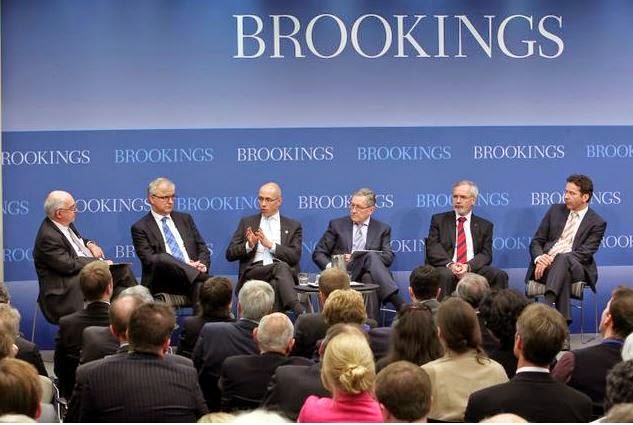 Well, just look at that: Another day, ANOTHER flippin' BROOKINGS PANEL where neo-liberal Washington Consensus "experts" in $700 suits that would DEEPLY impress Wall-P (power and money, you know) tell us how to make the world save for flippin' amoral corporate oligarchy and brutal Chinese mercantilism. Where are Benji Wittes and Sebastian Mallaby??
*******


Secondly, the current policy wonk consensus that Democrats basically just have to wait years and decades until demographic changes eventually allow them to win the currently severely GOP gerrymandered House of Representatives that gives Republicans a huge advantage and an always-GOP-structurally-favored Senate -- and not even bother arguing on economic grounds to appeal to the under-assault working class is also questionable. 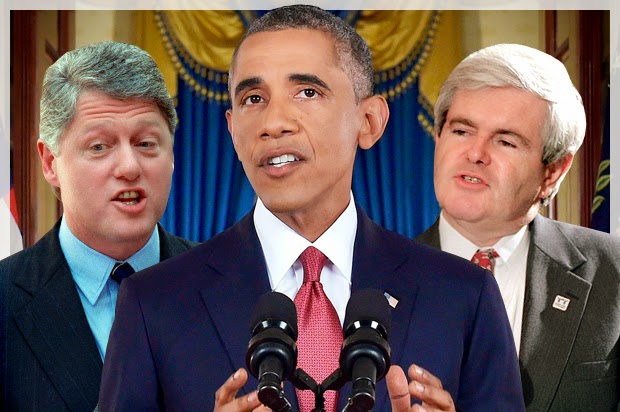 
This point tied directly into the rise of the "centrist," corporate-friendly, free trade-fixed Democratic Party in the 1990s under Clinton that took economic issues off the metaphorical table that allowed Republicans to hijack the debate on cultural wars stuff. 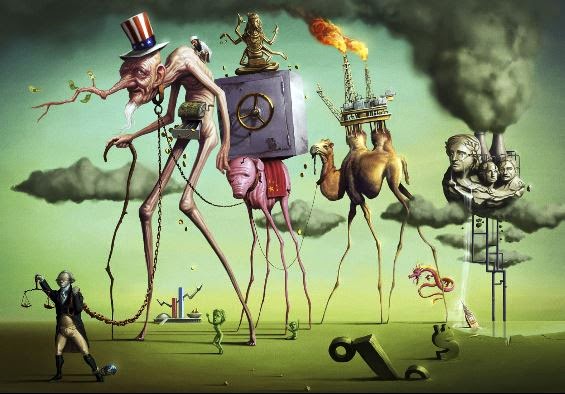 In brief, that "analysis" says that Dems should follow the "wisdom" of the frickin' "Washington Consensus" of Fred Hiatt's Washington Post editorial board and Bush-worshiping Sunday morning TV Beltway courtier class and become Republicans -- and it's all horsesh!t.
I personally think Frank has some good arguments in that column. 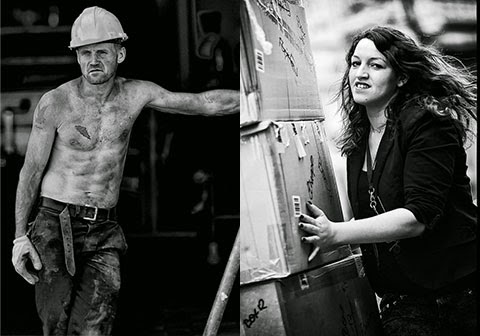 Alas, one of my favorite political writers, Jonathan Chait, penned a disappointing, even angry and slightly incoherent response (link embedded) "Have Nerds Betrayed the Left?" denouncing the Frank piece -- incoherent in that he uncharacteristically failed to marshal any evidence (I don't doubt that there is some convincing evidence for this, but there is also evidence to believe that surrendering the bread-and-butter issues of importance to beleaguered working class Americans is also a loser). Chait then borderline misleadingly quoted what Frank said by omitting key passages and emphasizing the wrong point. 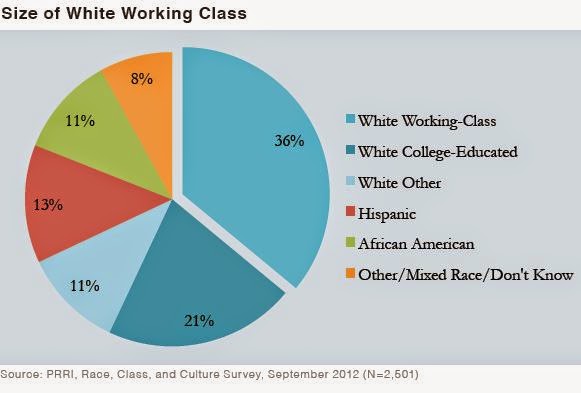 First, he dismisses the move to the corporate center -- i.e., to the Republican right -- outright by saying the assumption is "belied by a mountain of evidence." Not only does not cite any evidence but he essentially cedes the Washington Consensus world view by implicitly saying, yes, Dems basically need to be Republicans to win, or at least Robert Rubin-type corporate oligarchs. 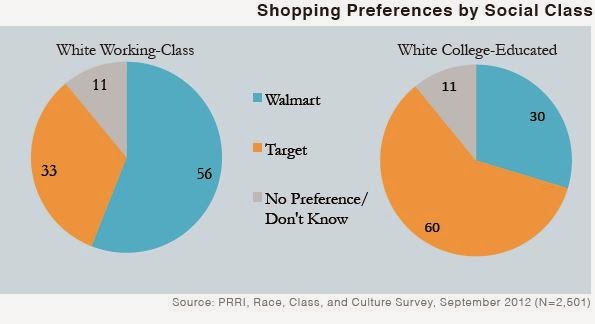 To be clear, this issue of the white working class and the working class in general and how it votes is a tremendously complex and critically important one for Democrats one with no single or definitive answer.

In terms of omission, he doesn't quote or even allude to Frank's culminating point (other than to argue that Frank implicitly concurs with the "science-driven" part, which totally misses said point):
"So a data-minded commentator like Nate Cohn is able to look out over the blasted moonscape of Appalachia and conclude that a party of the left has nothing it might conceivably offer the people there. If Democrats wish to win back the seats that Republicans have taken away from them in such stricken areas, the Dems must either become more conservative themselves or sit audaciously on their butts for a couple of decades while some new generation is born and grows up to populate the boarded-up towns and collapsing houses of the deindustrialized hinterland. Those are the only choices. 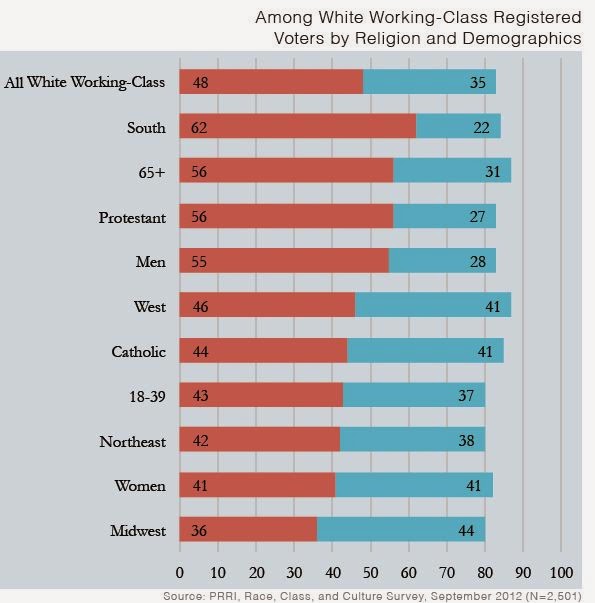 "The fatalism here may be science-driven, but still it boggles the mind. Today, the right is out there organizing and proselytizing and signing people up for yet another grievance-hyping mass movement. Over the last 40 years they have completely remade the world, and at no point did they play by the centrist rules. 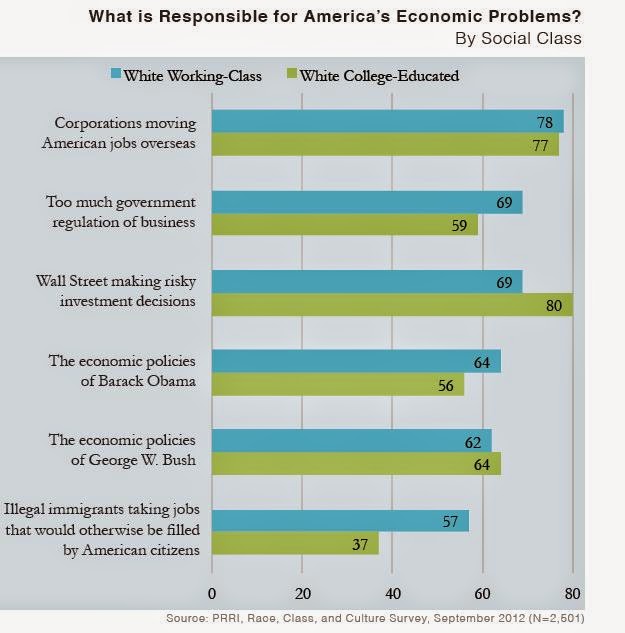 But the Democrats chase nobly on after grand Washington bargains and sign more free-trade deals and make endless compromises with Wall Street -- and then can't figure out why such achievements don’t win them the adoration of the people in the hard-bitten countryside. No matter. They'll simply wait for a new generation to come along, a new public that is more enlightened, better able to appreciate the fine distinctions between the parties, that is capable, at long last, of making the rational choice.
That was Frank's key point, and I'm a little disappointed in Chait gliding over it in the manner he did. 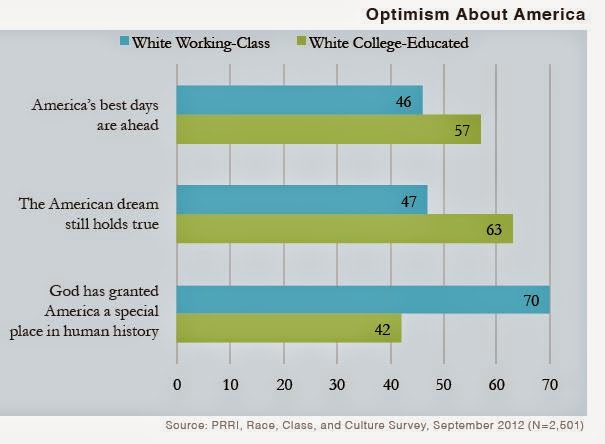 Of course, let me add as a necessary coda that it was Frank himself in his seminal What's the Matter with Kansas? who has argued that the white working class is voting against its own economic interests.
******* 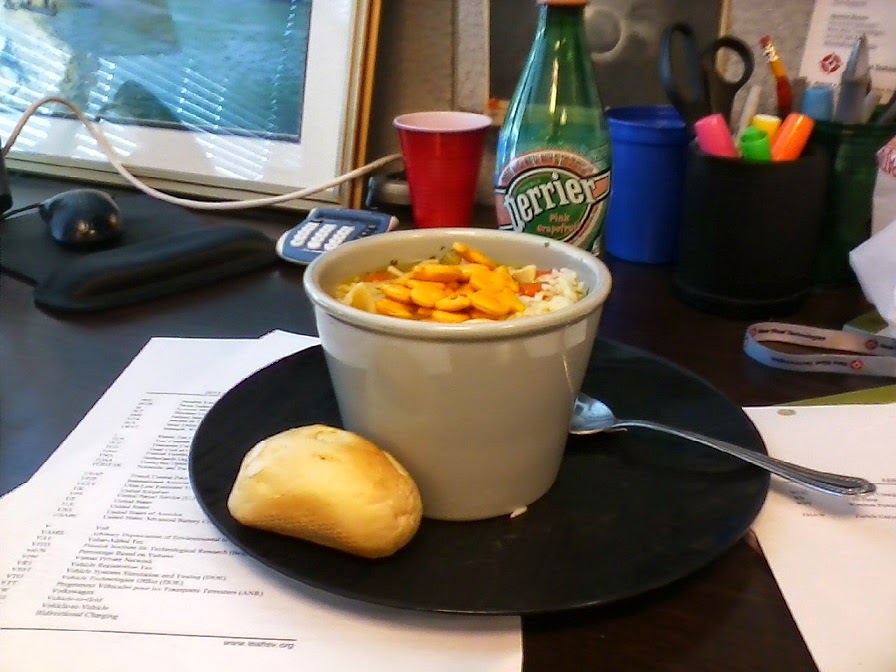 My mid-afternoon lunch at my desk: Rice and a roll from the agency cafeteria and a lower sodium Campbell's chicken noodle soup and Gold Fish crackers from the L'Enfant Plaza CVS, as well as a Perrier from the ground-floor little deli / hot bar. Somehow it all came together well, especially given how I was feeling. 2:37PM September 15, 2014, Washington, D.C.
*******


OK, that's all for now. My next planned update will be late Wednesday. My Monday was OK despite the difficulty getting up. I had a good gym workout as well.
--Regulus
Posted by Regulus at 1:50 AM