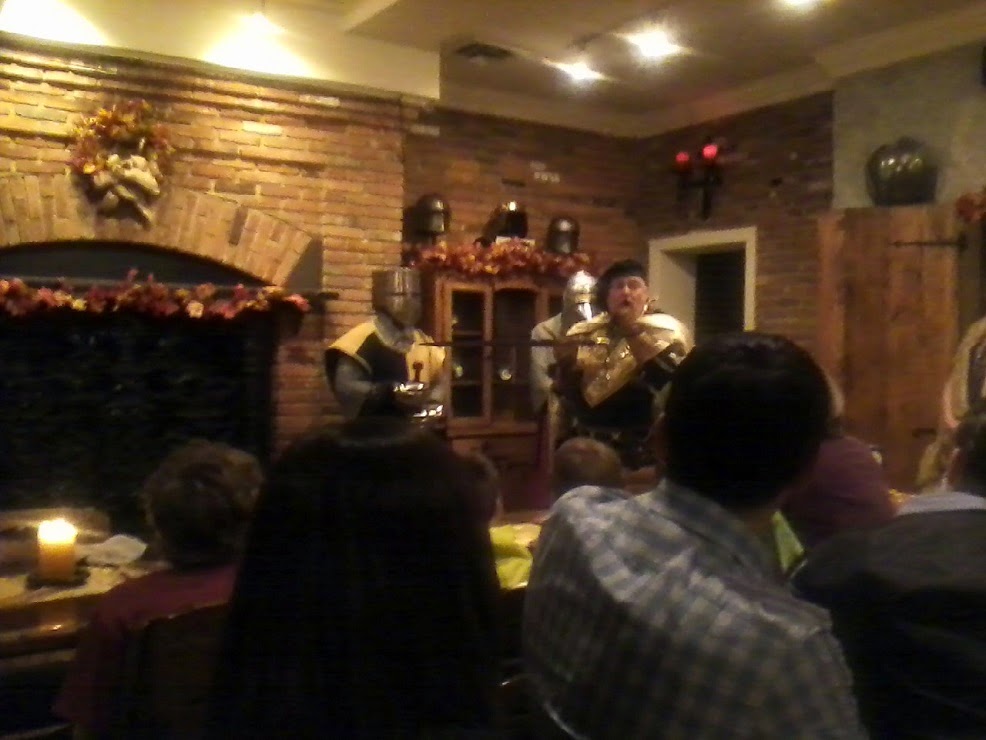 Tonight Two knights and the Duke himself at Medieval Madness dinner theatre, Alexandria, Va., 9:14PM September 26, 2014. I took this picture when the lights came up for the sword-fighting contest.
All but one of the pictures in this entry were taken last night at the Medieval Madness dinner theatre show at John Strongbow's Tavern in Old Town Alexandria. Three were taken by me and three by another person (Nate) in the group with a much better quality camera. I went there as part of a group of 9 people. Naturally, I was 20 minutes late and the show was already underway.
*******


It is Saturday night and I cannot post a jukebox Saturday night entry because of the frickin' evil Barracuda update from hell that I cannot undo on this my work computer. I'm hoping I can get some resolution next week. I ALMOST had a resolution on Friday with the help of the (remote) IT person but it just didn't work. 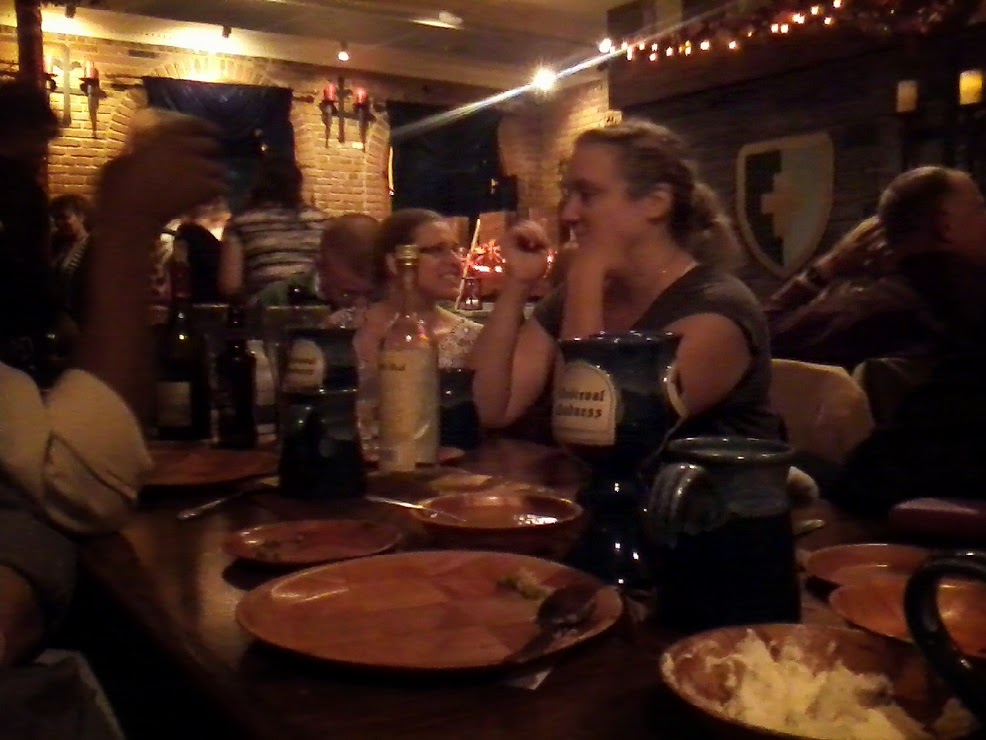 
As it is, I'm home watching (well, listening) to one of the RCN music channels (channel 896 / smooth jazz). I just had a 72-minute phone call with my dad just now. We hadn't talked in a while, partly because I was mad at him for never shutting up about Shannon. Sometimes I can handle it and other times I cannot.
As for my mom, she is in Cape May, New Jersey with Ray on what should be a nice late season vacation, except based on her texts, it sounds like it's anything but enjoyable. At this point, Ray's health issues are interfering with his quality of life. 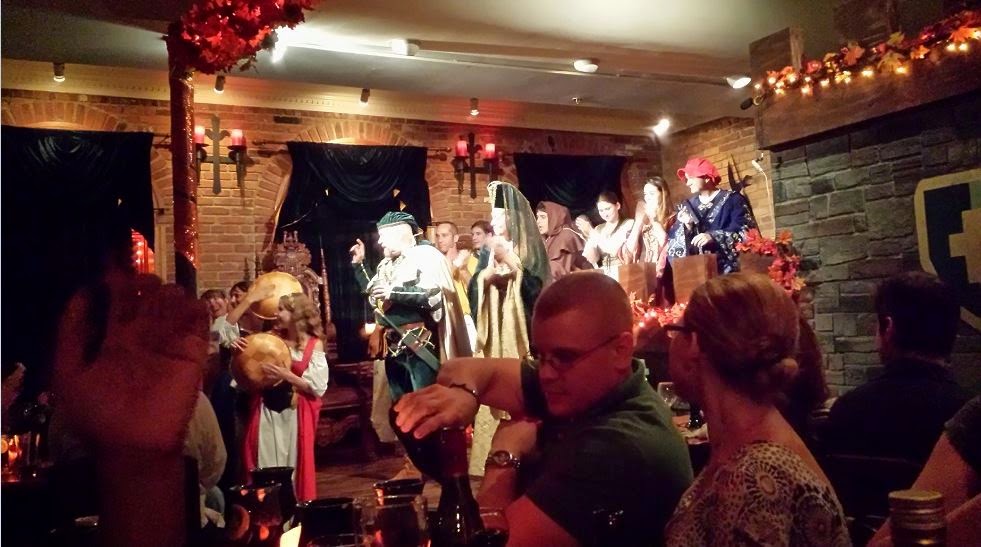 
As for tonight, I ought to just stay in. The previous two nights have been, well, excessive. Last night's Medieval Madness dinner show outing was actually quite fun -- and I really like the new location at John Strongbow's Tavern at 710 King Street in Old Town Alexandria. It is a lot nicer than the previous location a few blocks away on King Street in Renaissance Hall (now basically empty). The upstairs space is actually quite pleasant, and I also like the downstairs main bar. 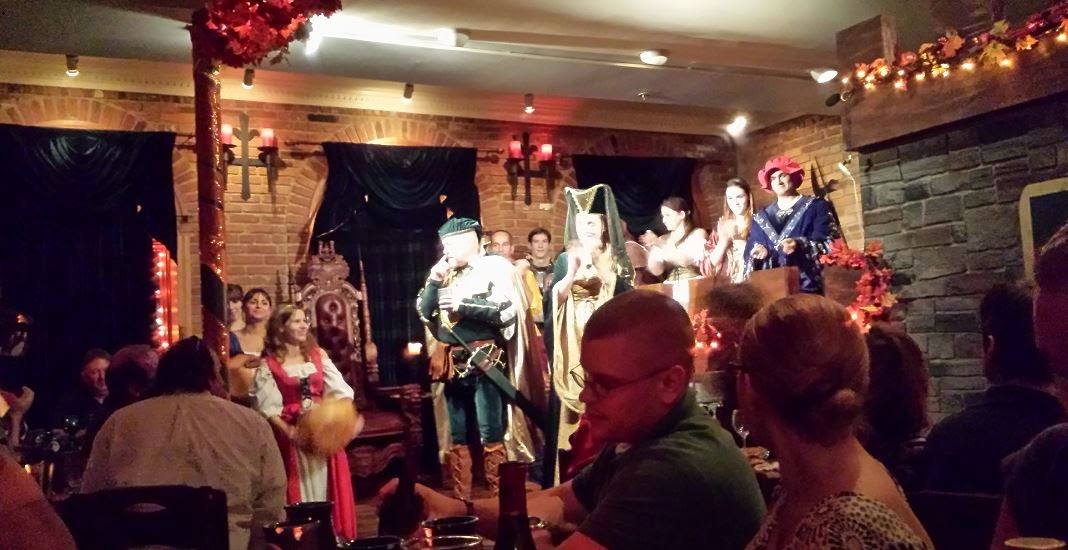 Medieval Madness dinner show finale, Old Town Alexandria, Va., 9:32PM September 26, 2014. This was another one of Nate's pictures.
The guy in the green shirt is Alana's boyfriend. I'm forgetting his name right now. Somehow, I started explaining to him the complex / hybrid continental-collision / ocean basin subduction geomorphology of the American Rocky Mountains and what the next supercontinent configuration might be a quarter of billion years hence.
*******


However, I had much too much mead, ale, wine, and then a shot of Jamison (which I did with this guy with long hair who I told looked like Jesus and after the show when we had all gone downstairs to the main bar).
Not even the food I had could absorb all of those libations that booze. There were 9 of us in the party. By the end of the night -- around midnight -- Jake and his friend M.* departed by Uber while Andrea, Imara, and I walked to the King Street Metro. 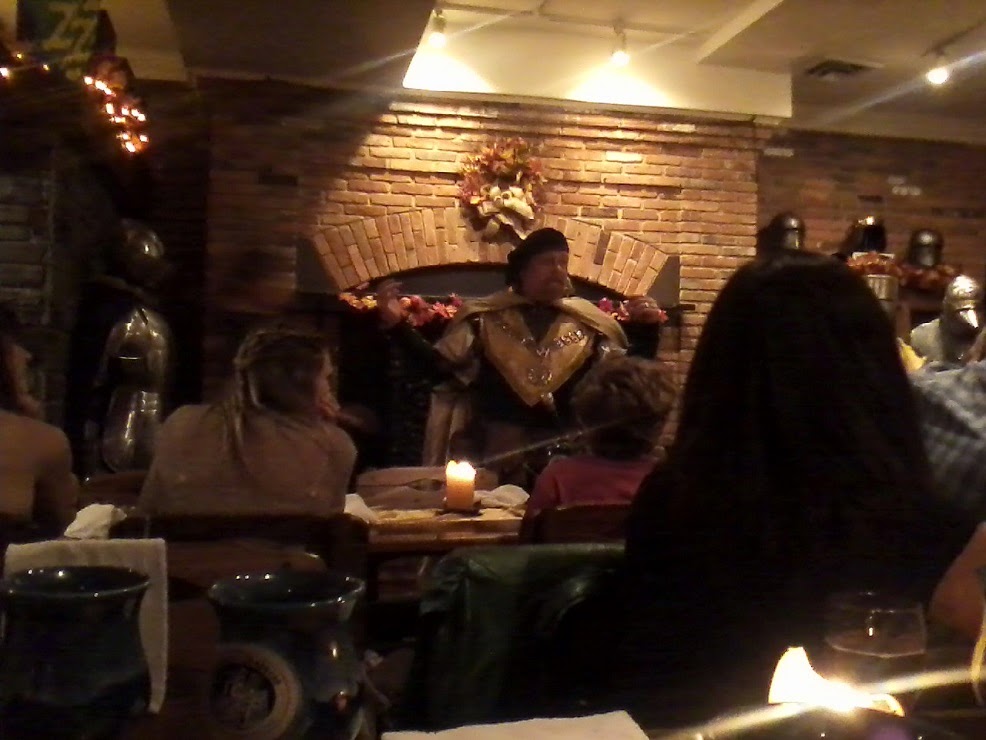 
*M. is not only from New Jersey but was born in the same hospital as me in Neptune -- although, like, 16 years later. (Back when I was born there, it was commonly called Fitkin Hospital. The "University" part got appended at some point in the past 15 years.) Of note, M. looked not a little like Rhianna.
Of note, I need to tell her that there is actually some doubt as to whether or not the name "Jersey" itself derives from Caesarea, as in "Island of Caesar." 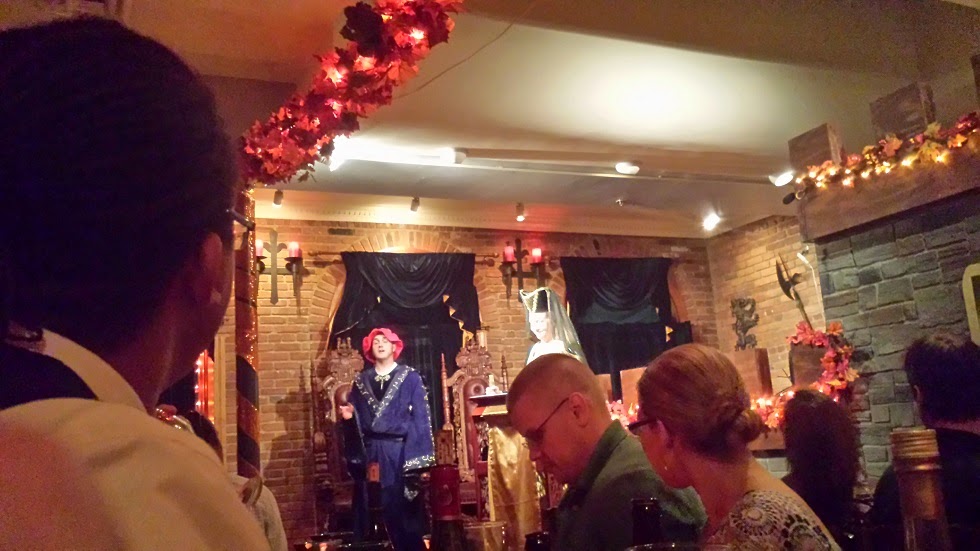 
Andrea told me (I actually don't recall) that I jumped onto the first Blue Line train to arrive while Andrea and Imara debated whether to take the Blue or Yellow Line (the latter would be shorter for them to get to the Green Line as they live in Michigan Park).
I got on the train and must have promptly fell asleep. I eventually woke up 22 stations -- and easily 50 minutes -- later as the train was pulling into Ouagadougou, Burkina Faso Addison Road - Seat Pleasant station out in the suburban wilds of Prince Jawjuhz County. Thus, I had transited the entire Washington, D.C., area. It was quite disorienting.
THANKFULLY, it was still early enough that I was able to get a train back into D.C. I took the next Blue or Silver Line (I don't recall which it was) all the way to Mac-Person, I mean, McPherson Square and then gave up and just cabbed the rest of the way home.
Apparently, nobody bothered me that whole time: I was whole and complete and unharmed, and I had my money, wallet, jacket, and shoes (don't ask). 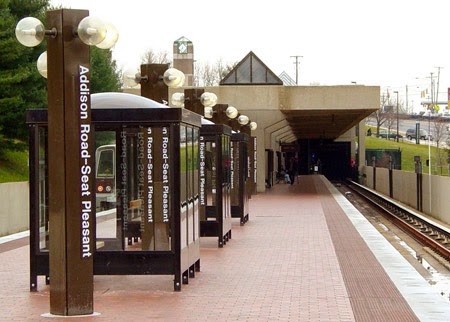 A random picture of the Addison Road - Seat Pleasant station.
*******


As for this Saturday, I managed to get to the gym this afternoon and have a complete, 3-part, 3-hour work out including jogging, weightlifting, and swimming.
OK, that's all for now. I intend to take a bike ride tomorrow, so I might not update the blog until Monday night.
--Regulus
Posted by Regulus at 10:45 PM