Laniakea, Joan Rivers, Betty White, and Brady's Dad -OR- On Large-Scale Spatial, Comedic, and Tragic Structures in the Local Universe 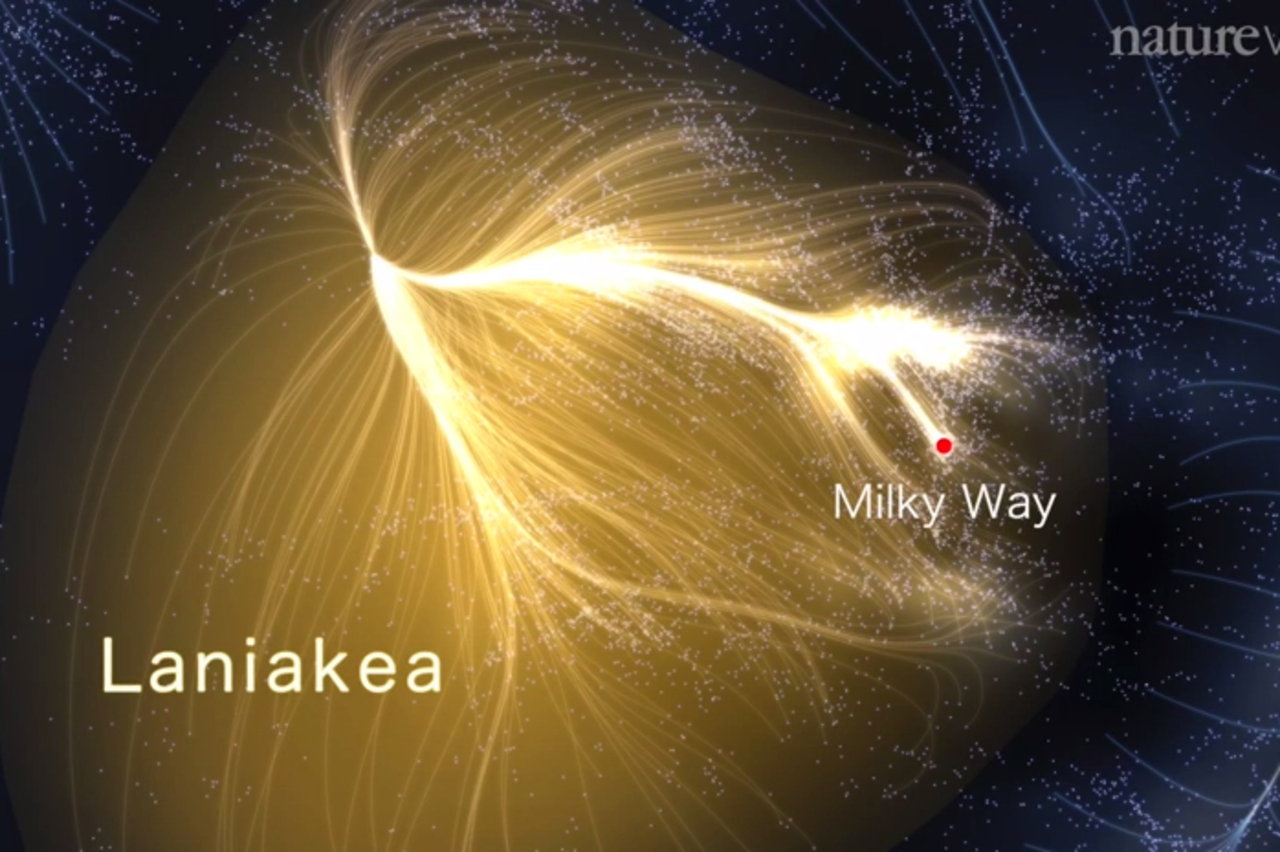 An illustration of the newly "discovered" Laniakea Supercluster of galaxies of which our Milky Way is just one. It sort of looks like a fiber optic network. And if you add other superclusters beyond just the Local Universe, it starts to resemble a neural network.
The filaments are actually "flow lines" indicating motion of the galaxies in what the authors call the "watershed" whose edges define the edge of the Laniakea Supercluster. Flow line "density" is shown by the relative thinness or thickness and represents (I think) the number of galaxies whose motions were measured.
*******


I had intended to post a longer entry discussing some stunning new findings about large-scale structure in the (Local) Universe, namely, Laniakea. What an awesome and awesomely appropriate Native Hawaiian name ("Immense Universe" or "Immeasurable Universe"). Laniakea would effectively replace the Virgo Supercluster as our local supercluster with the latter now just a nearby filament / appendage of the former (I'm not quite clear on that point). 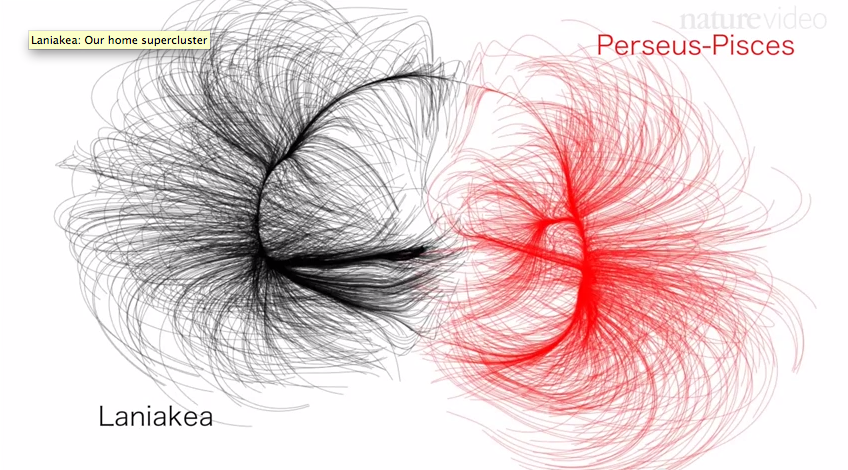 
The link to the study  here. The article itself is pay wall-protected but the abstract and informative / worthwhile video are freely available. Meanwhile, Bad Astronomy* writer Phil Plait has a good summation of the findings. (I'm heartened to see that Plait did the same thing as a nerdy child that I still do sometimes involving a "complete" address. As an aside, I was supposed to be the author of the book Bad Weather that was the second in the planned quartet of "Bad Science" series with Bad Medicine by a former colleague the second one. The series was cancelled before I finished Bad Weather partly because my draft sucked. It's just as well -- I would have had the VWRC Agit-Prop machine unleash upon me the global climate change-denying Know Nothing / Flat Earth & toxic Internet Troll crowd.)
*"Bad Astronomy" was the name of Plait's 2002 book, but it is also the name of his Slate-hosted blog with podcast series.
******* 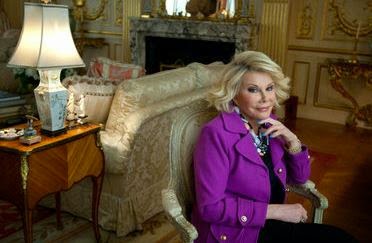 I also intended to post a full entry on the death of famed comedian Joan Rivers that included links to articles and my own thoughts about her. She died on Thursday following complications from botched minor throat surgery a week ago. The New York Times -- whose obituary to her is linked above and contains about a half dozen of her jokes, a couple of which I found hilarious -- included an additional article assessing her comic style and her life from her pioneering style in the 1960s, her stardom, her spectacular public split with her dear friend and mentor Johnny Carson and subsequent difficult professional and personal period in the 1980s, her big comeback in the 1990s and 2000s, and a pair of bumps this summer. She was 81. 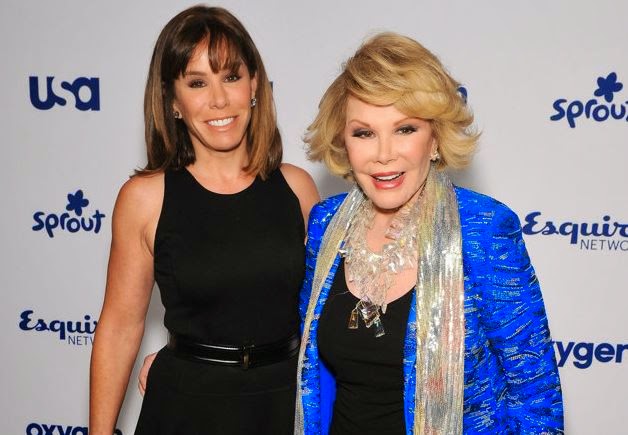 As a random aside, for some reason I was thinking of the 2013 episode "In Bed with Joan" from her WE tv series Joan & Melissa: Joan Knows Best? in which her subsequent actual internet talk show (with same name as episode) debuted. It featured a flummoxed Kato Kaelin in Melissa's Malibu house (in the utility / laundry room at one point) and Rivers in Melissa's bedroom. She was saying to him as a sort of stage direction but double entendre, "and you step OUT of the closet ... you step OUT of the closet." He got pissed off and stormed out. It was hilarious. (I imagined instead "MWH" substituted for Kato Kaelin in that episode. That was even funnier to me. Why? Would-be fame turned instead to deserved ridicule and general hilarity.) 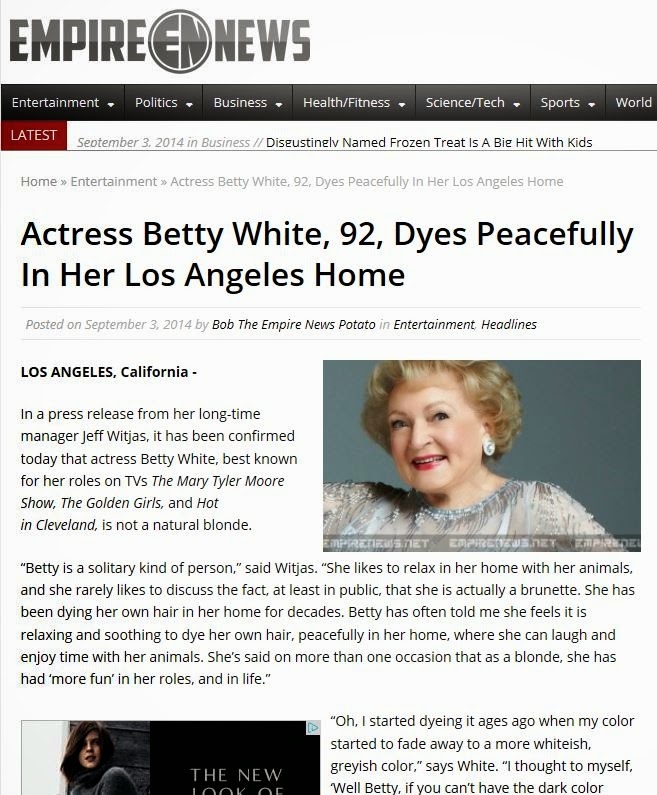 As part of that entry, I wanted to note the weird irony that Joan Rivers herself would have found interesting involving a satirical "news" article on the site Empire News that appeared the day before Rivers died involving a clever but of questionable taste homophonic pun on Betty White dying her hair that fooled a number of people. 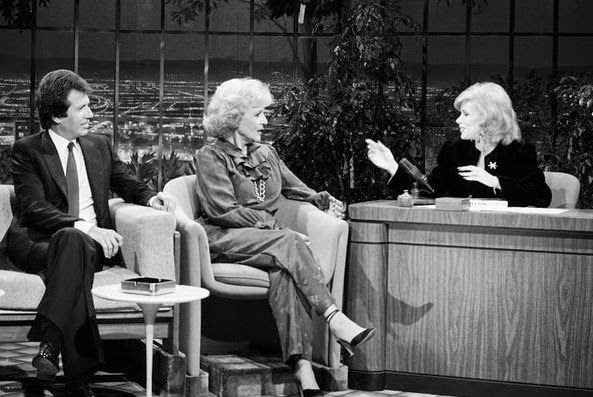 Above: A black and white still featuring Garry Shandling and Betty White as guests on a 1983 episode of "The Tonight Show" in which Joan Rivers was substituting for Johnny Carson during one of his prolonged vacations.
The above got me to thinking of the episode of The Golden Girls where Rose (Betty White) describes a traffic incident with an infuriated driver and mentions Joan Rivers.
****** 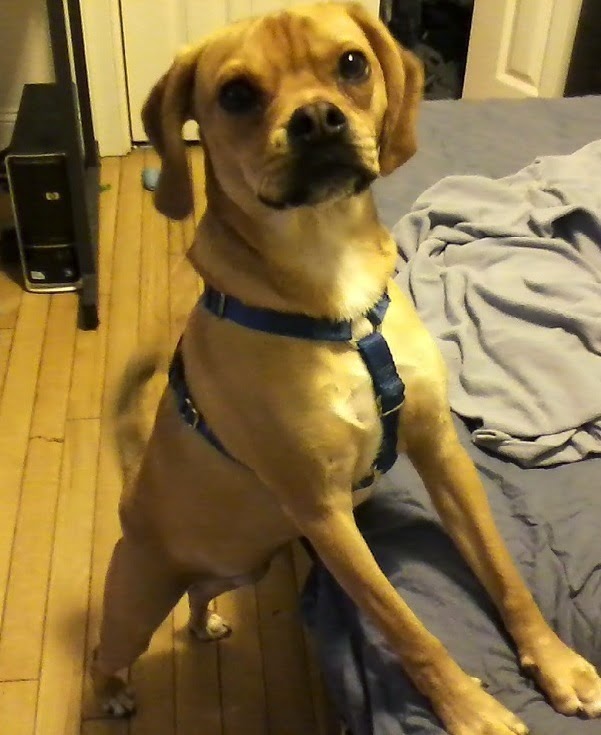 Finally, I also need to post a carefully written entry discussing the end of my friendship -- such as it was -- with Brady's dad. That entry will avoid any personal information about his situation instead focus on the issues for me. Oh, and also why I don't want to deal with David and his attitude toward me.


It's my beloved Brady that I'll miss the most because I won't have any opportunity ever again to see him.
However, I managed instead only to post this concatenated / partial entry by 215AM and I need to get to bed. So this one will have to suffice, although I might post a fuller description of the issue with Brady's dad on Friday evening or over the weekend.
--Regulus