"How 'Bout Us" by Champaign on the eponymously titled album (1981)
The song was originally released in 1975 by the Water Brothers Band but this version was the big hit.
*******

"Defying Gravity" by Kool & Klean on his Volume 1 release (2010)
This is really the essence of a smooth "smooth jazz" piece. As for the still image accompanying the YouTube piece*, well, it's really the only one I could find. (There were two other YouTube versions found with similar-themed images). Furthermore, based on the kind of images associated with this and the other four Volume series released by Mr. "Kool & Klean" himself -- that would be the saxophonist Konstantin Klashtorni -- namely, pretty young women, it seems to be his preferred imagery. And there is a certainly a lovely gracefulness and beauty to her.
*I mean, this IS a gay man's blog, so you wouldn't expect that kind of imagery ...
*******


And now for a song and video I have always really loved ...
"Together Again" by Janet Jackson from her release The Velvet Rope (1997)
I really love the mournful yet hopeful lyrics -- purportedly written for a friend who had died of AIDS -- that is set to a dance beat. As for the video, I love the imagery of a cathedral created out of (CGI-rendered) images of African rainforest and bush settings with that wonderful animal menagerie. Then there is Janet Jackson's fascinating adaptation of the iconic Madonna and Christ Child image featuring identical twins of herself. That is an interpretation I had not previously encountered. Oh, and of course, there is the signature Jackson family carefully and amazingly choreographed group dance.
*******


I had intended to post another entry tonight prior to this one but never got around to composing it, partly because I had to do my laundry, make dinner, and got distracted watching this (which I may very well post in a dedicated entry). 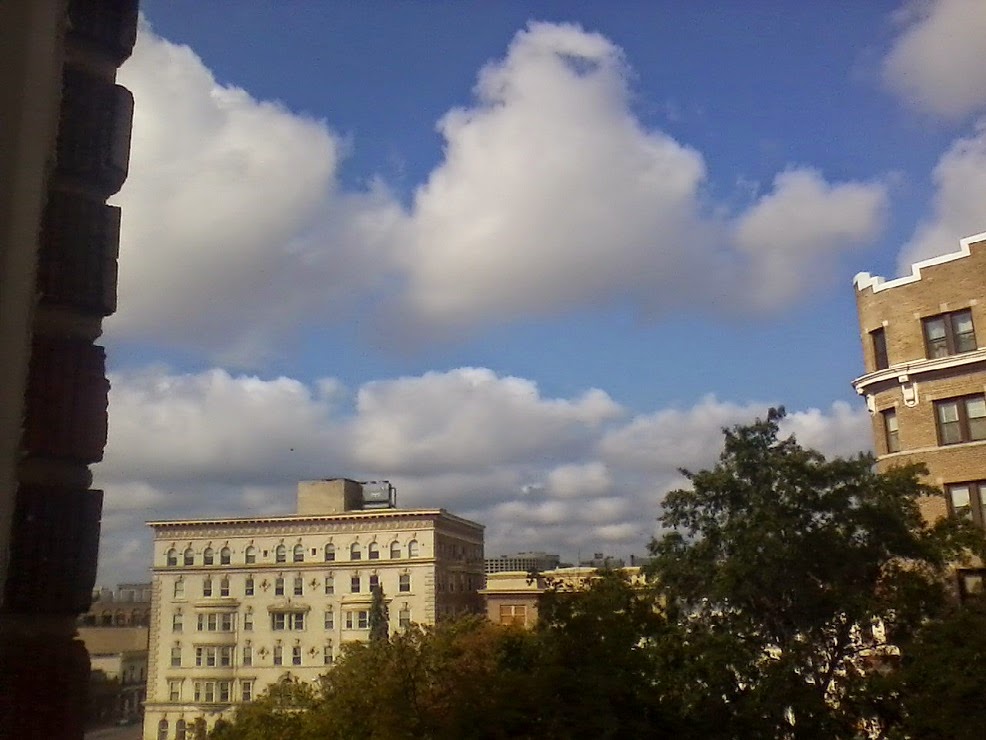 The view this mid-morning from my 5th floor Hampton Court(s) apartment overlooking the intersection of 16th and U Streets NW, Washington, D.C., 10:12AM September 20, 2014.
Note the lovely puffy white cumulus clouds in the sunny blue sky, although we need some rain. The large white building is the Balfour (where that hot guy Randy lives) and the one just visible on the right is the Brittany.
*******


As for my Saturday, I had a good three-part gym workout today. For tonight, I'm going to Larry's Lounge and Nellie's -- except I'm nearly broke until payday (this coming Thursday). (Ooooh, I'm tired of writing that sentence.)
For tomorrow, I would like to take one of my Sunday bike rides.
There are a couple entries I want to write including another installment of "The Wall-P & Me Chronicles" and my political dyspepsia from a leftwing perspective. 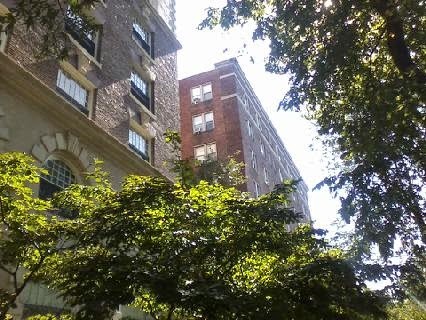 The ornate Northumberland cheek-by-jowl to my old Hampton Court(s) apartment building in the 2000 block of New Hampshire Avenue NW, Washington, D.C., 2:45PM September 20, 2014.
I have written about the Northumberland, in particular in this entry. I was walking to the gym (Anthony Bowen YMCA, although I actually then went after my main workout to the National Capital YMCA to swim).
*******