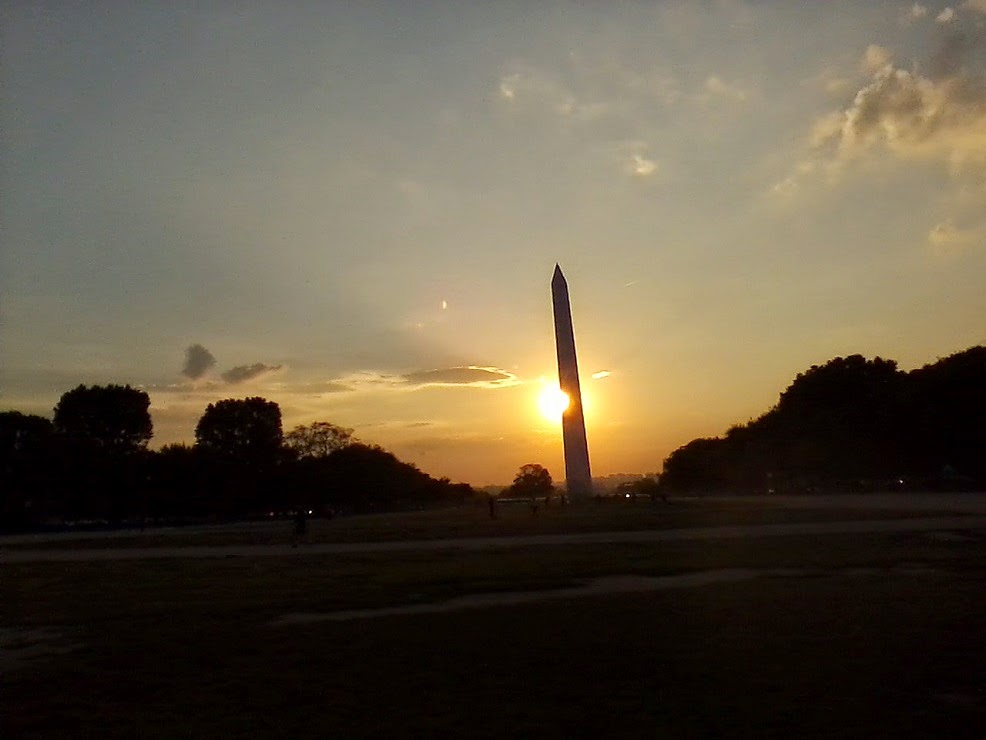 The low-angled setting Sun silhouettes the Washington Monument as seen from the National Mall, Washington, D.C., 6:37PM September 18, 2014.
This entry contains links and excerpts of some good reads. The pictures are wholly unrelated and instead are those that I took over the past five days including a series I took while walking home from work last Thursday (Sept. 18th, 2014). There is no particular theme to them and bear no particular relation to the blog content.
*******


Here is Thomas Frank on the disaster that is Governor Sam Brownback's Kansas (the URL link is embedded): "In Brownbackistan, everything is awesome! And don't let any liberal tell you different". 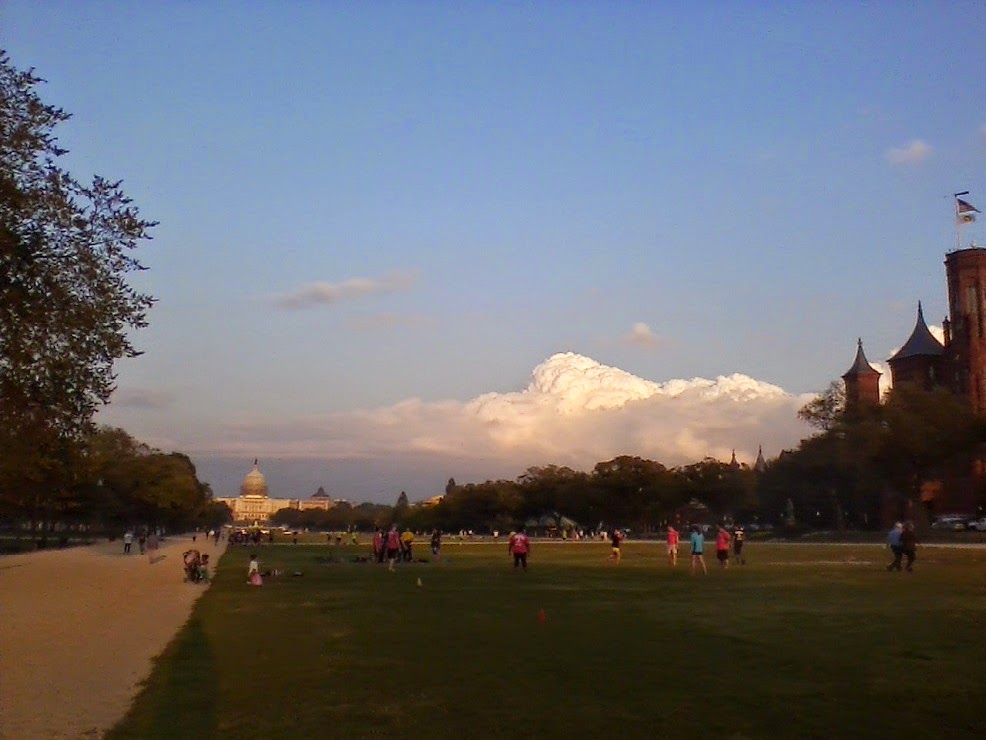 A distant towering cumulus / cumulus congestus cloud mass visible about 20 to 30 miles away to the east/southeast (probably over the Chesapeake Bay) as seen from the National Mall with the U.S. Capitol -- partially encased in scaffolding -- also visible; Washington, D.C., 6:38PM September 18, 2014.
*******


I can't even begin to quote the piece. It is an eloquent jeremiad that must be read in its totality to appreciate. However, let me just quote the end. After listing all the horrors that the state's radical Republican Governor and legislature and assorted crooks and cronies have wrought on the state's working and middle class -- those who were the rightwing "populists" that the wave election of 2010 brought to power -- he concludes as follows:
"And what have the populists' leaders done with that power? To say they proceeded to sit down and write passionate love letters to Wall Street is hyperbole, but it's not sufficient. What is going on here is so freakishly self-damaging, so bizarrely self-contradicting that it makes you think of a man trying out his new shotgun on his own foot, or of a president putting a meth addict in charge of the nuclear football." 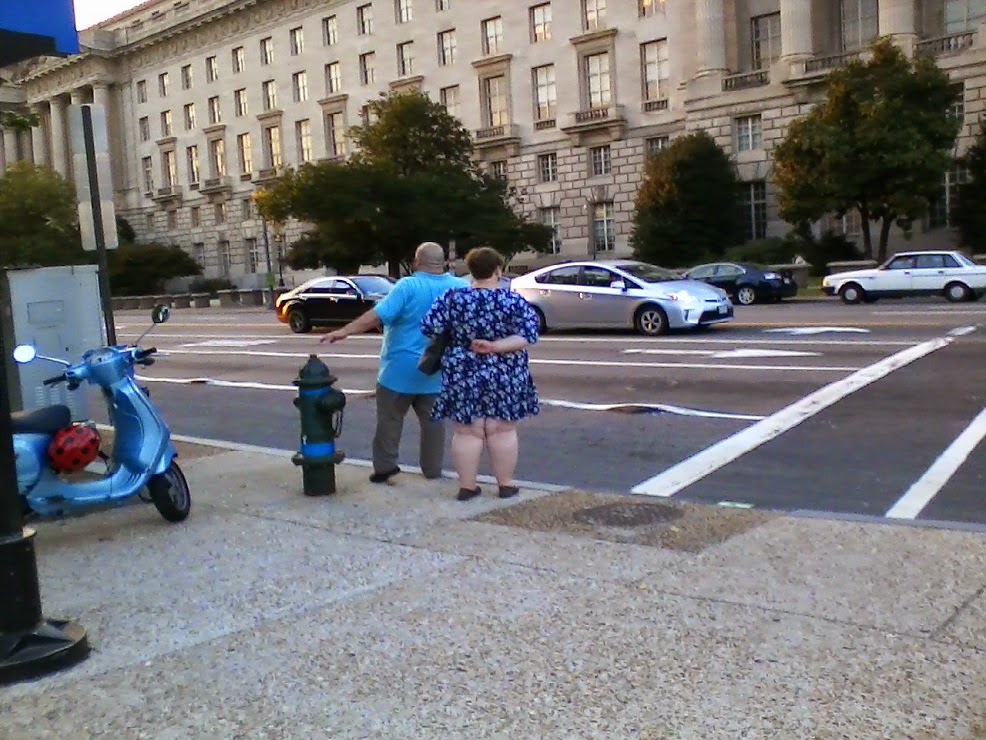 
"Think back over all those years of prayer and organizing and going door to door and yelling about the liberal elite with their lattes and their fancy Volvos -- what has it fetched the rebellious right-wingers of my home state? Yes, one of their leaders got a cash-out job in leafy Leawood. Hopefully a McMansion, too. But for most of the rest of them it's crumbling schools and dwindling services and the huge expressionless face of the local ag monopoly, remorselessly bidding down the labor of their neighbors. Before they vote again for that prayerful fellow who makes such a show of genuflecting before Mammon the great and powerful, they need to consider: maybe this guy's got the wrong god."
The Dainty WaHoPo Editorial Board -- both back in the 1990s and through the present, all under the Awful, Endless Reign of Fred Hiatt, Grinning Idiot Tool of the Oligarchical Overclass and its Neoliberal Economics and Neoconservative Warmongering -- would soil itself rather than have THAT kind of progressive cri du coeur in its print pages. 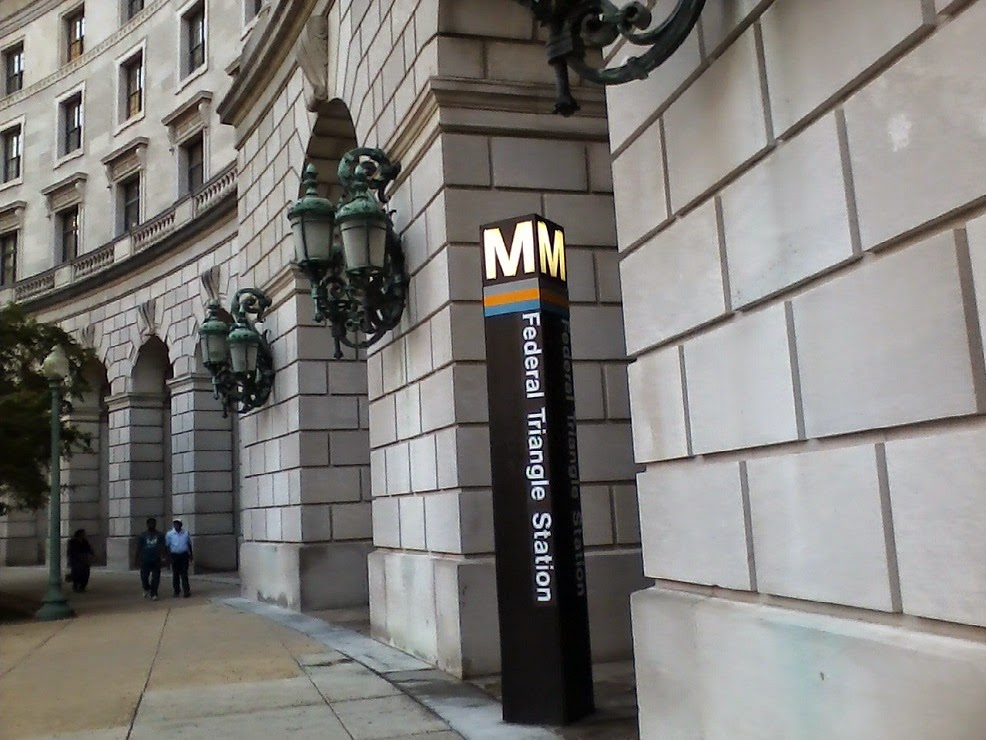 The entrance to the Federal Triangle Metro outside the William Jefferson Clinton building, Washington, D.C., 6:45PM September 18, 2014. This lovely, ornate building was for many years called the Ariel Rios Building, and personally, I wish the name had not been changed.
*******


Of note, Jonathan Chait picked up on this theme -- and discussed the situation in Kansas in the context of Frank's seminal work What's the Matter With Kansas? The piece was (link embedded): "Have Republicans Finally Gone Too Far in Kansas?"
Chait makes the (useful and fair) point that what's doing in the Republicans in Kansas is their own blatant reverse class warfare rather than any full-throated embrace of liberal populist economics that Frank urged. 
"The Thomas Frank vision, of a fighting populist Democratic Party prying working-class whites from the Republican Party with blunt appeals to economic populism, bears almost no resemblance to the events in Kansas. Mostly, liberals have benefited from right-wing self-destruction." 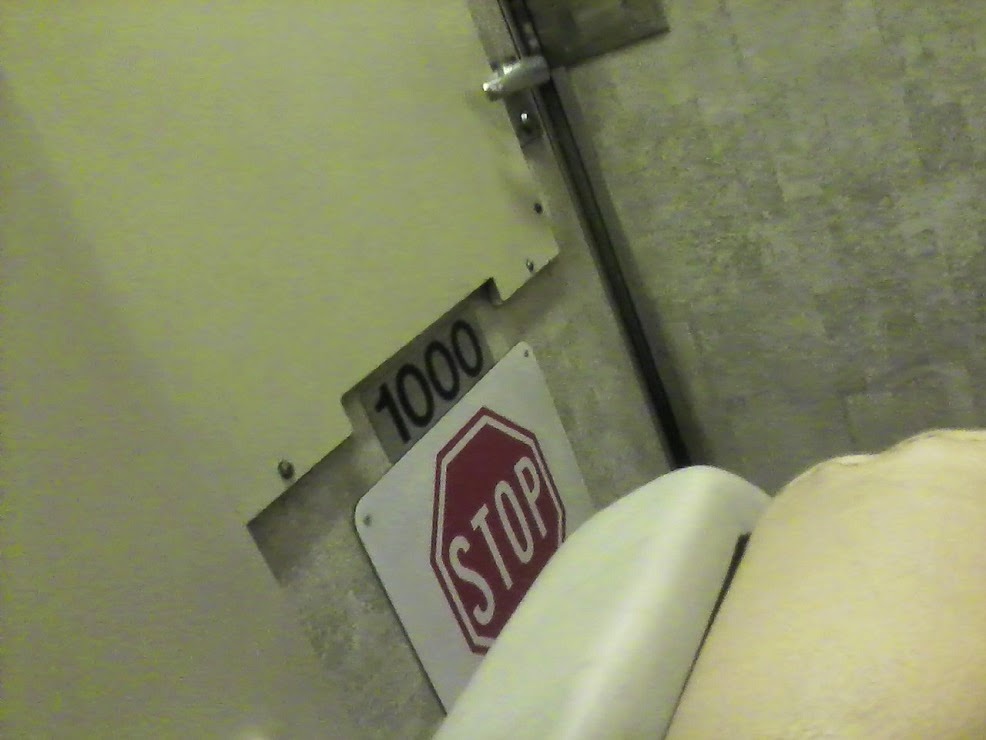 
Chait then sums up the situation nicely though as follows:
"Brownback's biggest mistake was to forget a lesson Frank made well: Even in Kansas, tea-party populism requires the maintenance of a ruse. One needs cultural elites and other enemies to bash in broad daylight while doing the dark work of plutocracy behind the scenes. Openly conducting class warfare on behalf of the rich is no way for a pseudo populist to get ahead." 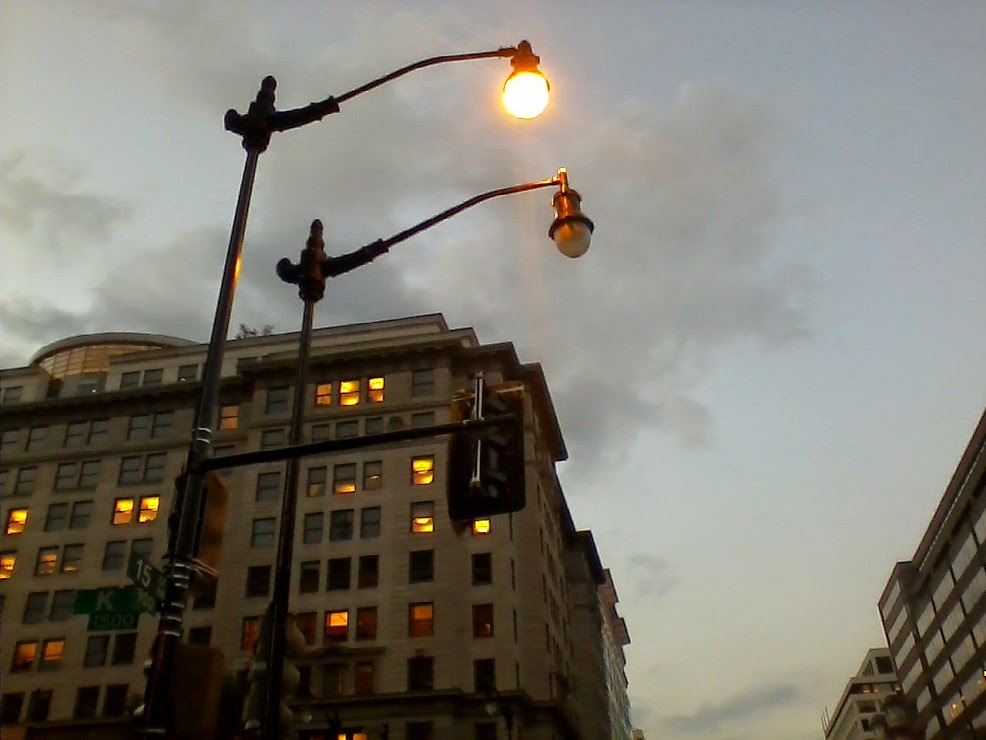 Twin streetlights at the corner of 15th and K Streets NW, Washington, D.C., 7:12PM September 19, 2014. It appears that the unlit streetlamp is replacing the lit one, although they look almost identical (they are the newer, more ornate ones that are replacing the flat-bottomed "cobra heads" that were installed in the mid-1990s).
*******


Chait wrote this piece just a couple days after his snarky blog entry dismissing Frank's Salon column smack-down of Ezra "I've Got Data" Klein's arrogant piece on the triumph of data-driven policy wonkiness in Washington, D.C. I wrote about that in this blog entry. 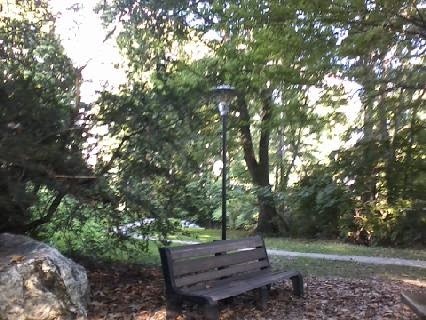 The Grosvenor Park grounds in what the Post Office calls Rockville but is really unincorporated North Bethesda, Md., 4:41PM September 21, 2014.
*******


Of note, Klein wrote his own nasty retort on his Vox.com site that -- just like the Chait piece -- completely missed Frank's original point, namely, that the Democratic Party as the party of the left / traditional working class but embodied in its elite D.C. wonkiness simply offers nothing to the folks in Appalachia. 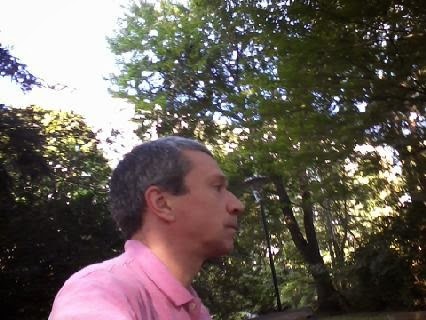 
Frank was expressing his exasperation at the fact that the D.C. Democratic pundit class -- now mixed with the political science set -- have essentially given up any hope of appealing to those folks. Frank is advocating. Klein is arguing what his data tells him what is (or at least his interpretation of it). They are arguing two different mindsets. 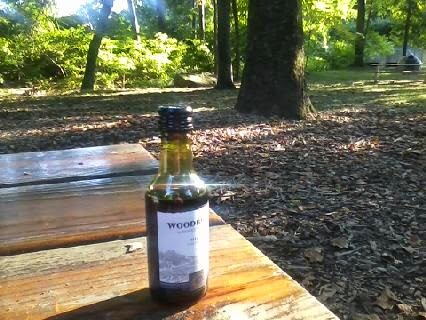 A small bottle of cheap red wine on the picnic table on the Grosvenor Park grounds, Rockville (North Bethesda), Md., 4:56PM September 21, 2014.
I had gone -- of course -- to the wonderful little Grosvenor Market for my impromptu picnic for which LP joined me before I biked all the way back to Dupont Circle via the Bethesda Trolley Trail, residential Bethesda, the Capital Crescent Trail, and then MacArthur Blvd. through Palisades and into Georgetown.
*******


Again to quote Frank in that first piece:
"So a data-minded commentator like Nate Cohn is able to look out over the blasted moonscape of Appalachia and conclude that a party of the left has nothing it might conceivably offer the people there. If Democrats wish to win back the seats that Republicans have taken away from them in such stricken areas, the Dems must either become more conservative themselves or sit audaciously on their butts for a couple of decades while some new generation is born and grows up to populate the boarded-up towns and collapsing houses of the deindustrialized hinterland. Those are the only choices."
Neither Chait nor Klein ever addressed this fundamental point. 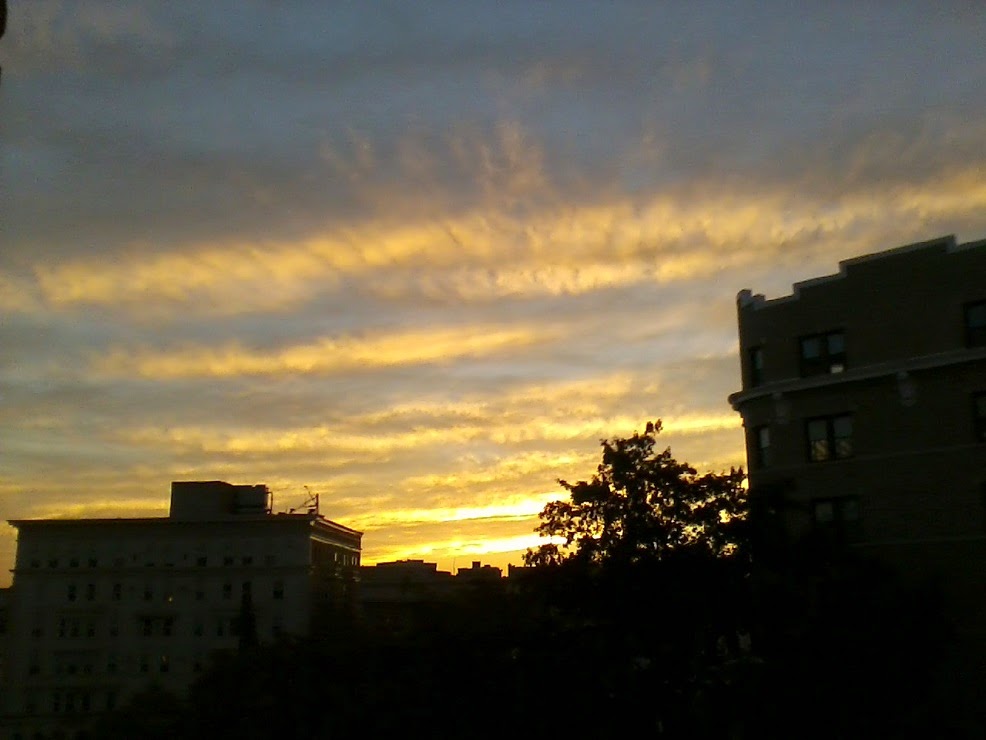 Tonight's sunset as seen from my little 5th floor apartment kitchen window, Washington, D.C., 7:05PM September 22, 2014. The Sun was setting on the last day of astronomical summer in North America.
Perhaps the Capital Weather Gang will post an entry with far superior pictures. Unfortunately, such a entry is likely to be written by Dainty Ian -- he whose "I love endless sunshine" weather entries just too annoying to read so I don't.
*******


OK, I had intended to post some additional links / excerpts of columns including some important ones by my main man, Paul Krugman; however, it is getting late and I need to go to sleep. In addition, I don't want this entry to go on interminably. So my plan is to post the Krugman ones in my next entry.
--Regulus
Posted by Regulus at 1:54 AM