Aye or Nae the Voting Scotsman? -OR- Scotland Votes, Great Britain and the World Watch (UPDATED: The No Side Wins; What Next?) 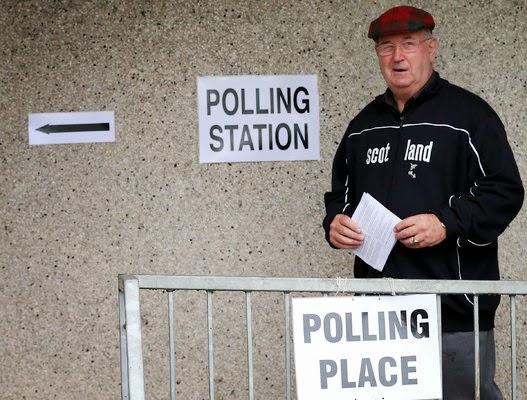 A man votes in the village of Strichen, Scotland on the Scottish independence referendum, September 18, 2014.
******* 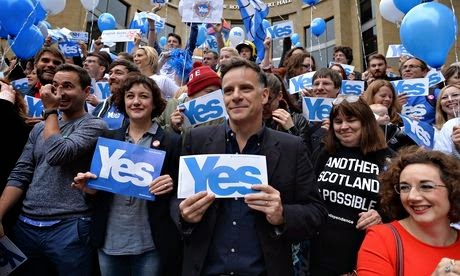 
Of note, the UK Guardian website -- if you access it via Google -- defaults to the US version rather than the UK version. The US version kindly tells Americans where they can go to watch the results swoop in -- including in New York, D.C., and Boston. Here in D.C., it's at the Brixton and a place I never heard in NE D.C. (H Street Corridor) called the Queen Vic. 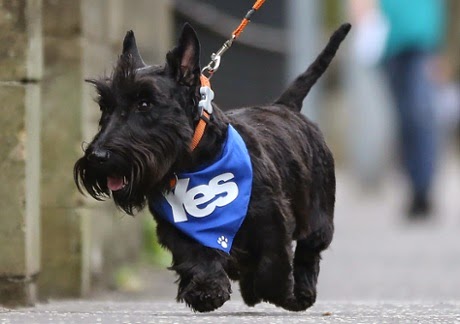 An adorable Scottish terrier dog (how appropriate) sports a "Yes" bandana in a street in Glasgow on the morning of the Scottish independence referendum, September 18, 2014.
*******


Who knew I'd ever get all excited about the overwhelming "NO" results from the Orkney Islands. Awesome.
Here is a link to the comprehensive results being updated in near real-time on the Guardian website. The New York Times website is carrying live updates as well. The Times of London site coverage is here (though it is mostly behind a pay wall -- screw you). 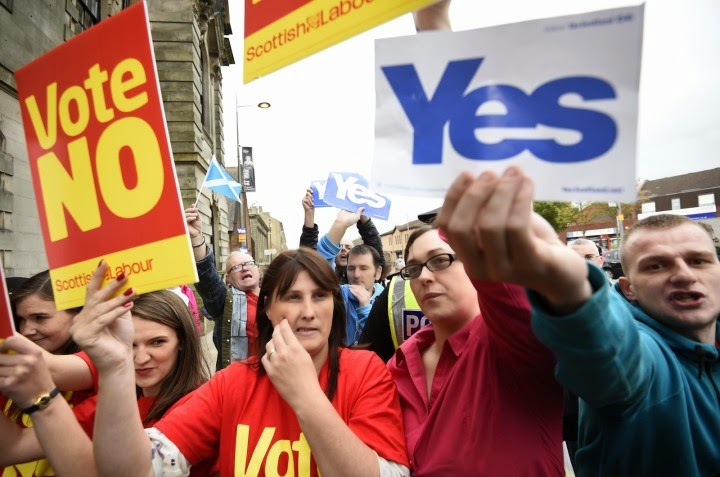 Scottish "no" and "yes" supporters rally for their sides ahead of the Scottish independence referendum, September 2014. The "yes" side has been particularly aggressive in its efforts with some ugly stories.
*******


*The 32 districts or local councils (authorities) account for 5,500+ polling stations. Turnout is quite high -- presently estimated at 84% (the voting age is actually 16). Edinburgh's results have yet to come in, though. 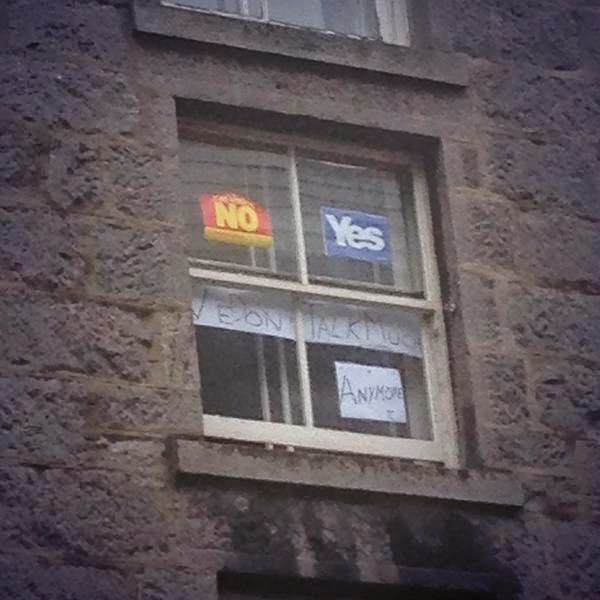 "No" and "Yes" supporters in the same flat in Aberdeen post signs in a single window -- along with a note about how this has caused some domestic strife. Aberdeen, Scotland, September 17, 2014.
*******


Before I end this entry, I want to note this piece by John Cassidy in The New Yorker (link embedded): "Can Great Britain Survive a Scottish 'No' Vote?" 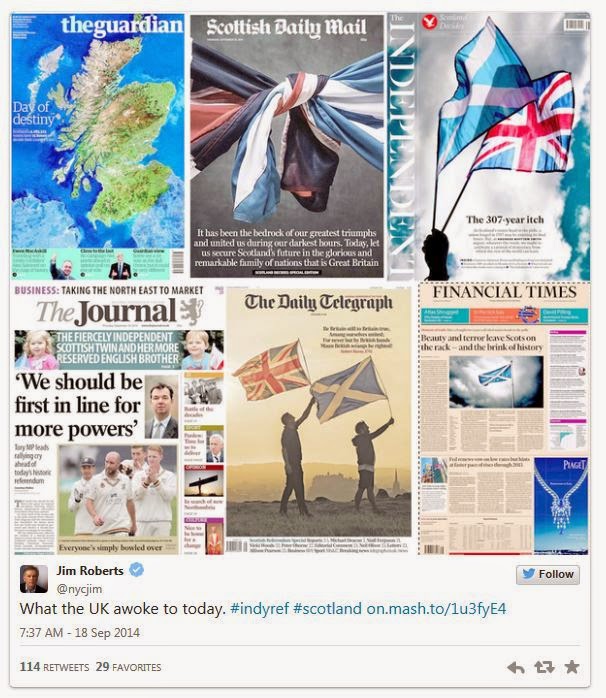 A Twitter posting showing the different print edition headlines across the UK on the morning of Scotland's independence referendum day, September 18, 2014.
*******


Cassidy assumes the "No" vote will win -- but this poses its own cascading set of problems for the long-term survival of the United Kingdom of Great Britain and Northern Ireland in its present form. It has to do with the reaction of the rest of Great Britain to the "devo max" (maximum devolution of powers to Scotland) option that the Cameron government and others have promised in return for a "No" vote. 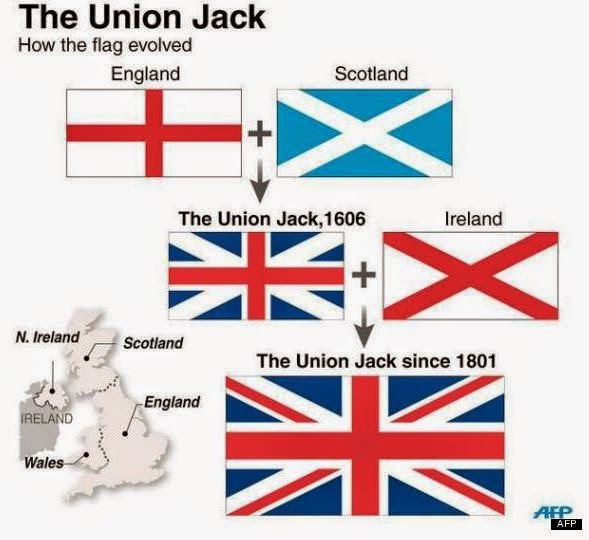 An interesting schematic showing the evolution and components of the Union Jack.
*******


I also want to note this rather eloquent piece that appeared in the Huffington Post by former British Prime Minister Gordon Brown on what is driving Scottish desires for independence: "Scotland's Quarrel Is With Globalization, Not the U.K." It gets to some points that I think are really valid. It's the kind of piece that Tory ex-pat and Washington Consensus ringleader Sebastian Mallaby should read several times.
Now if and when there is a recount, will Jeb Bush, Katherine Harris, and the "Scalia 5" get to do the recount on this thing??

Oh, speaking of which, and just because I found it the other day ...
It features Wanda Sykes on "The Chris Rock Show" as a political analyst in the days after the 2000 Presidential Election disaster (but before the Supreme Court Coup).

True, it was 14 years ago but it's still HILARIOUS -- and the events still as raw and painful for some of us progressives -- not to mention the abiding and enduring loathing that some of us feel for the Beltway media / pundit class in their collective role in this that (for me) is embodied in The WaHoPo editorial board.
*********************** 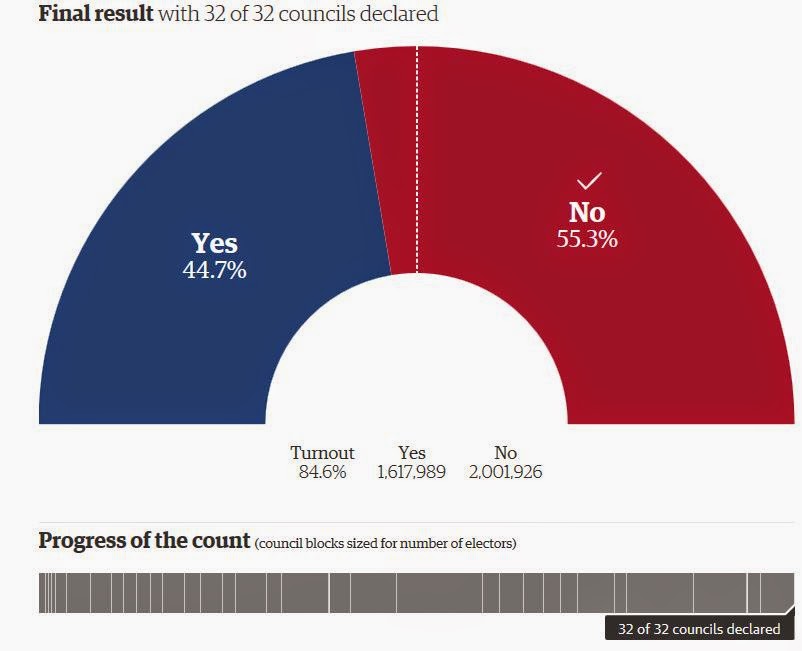 SECOND UDPATE WITH FINAL RESULTS: Chart of the Scottish independence referendum with all 32 councils reporting, updated at 11:17AM EDT, September 19, 2014.
*******


The "NO" side has won in what I want to say was an "easy" victory, except that this was anything but an "easy" contest -- and it still shows that practically half of Scottish voters want independence from the UK. 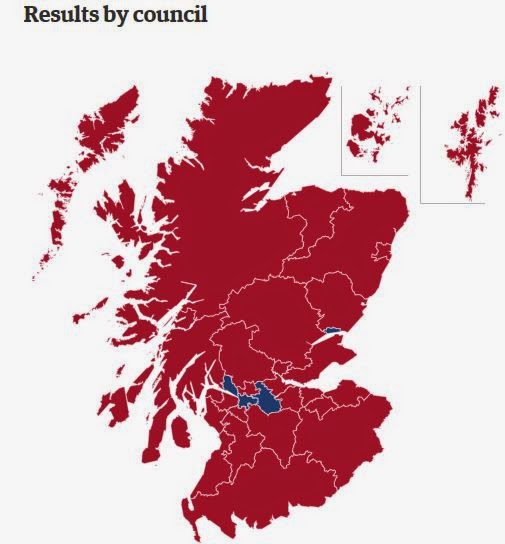 SECOND UPDATE WITH FINAL RESULTS: Scottish independence referendum vote by council with all 32 councils reporting (as of 11:17AM EDT) September 19, 2014.
******* 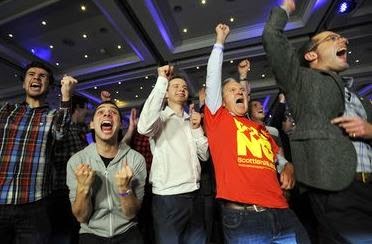 "No" (pro-union) supporters celebrate the favorable returns in the Scottish independence referendum in Glasgow, September 19, 2014. (That one fellow sure looks gay. Maybe this is the "gay Better Together" contingent.)
******* 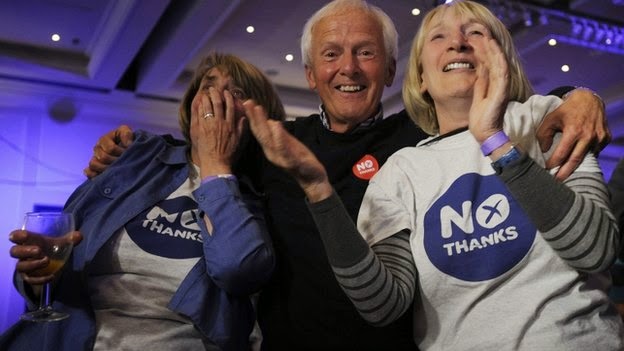 
This outcome is only the beginning of a much longer and complicated process that is still quite possibly (again citing the Cassidy piece) to change the composition and governmental structure of the United Kingdom. More immediately, I hope the "no" supporters aren't too furious in their response.
--Regulus
Posted by Regulus at 12:20 AM